Kansas City closed this public pool for two years instead of letting Black people in.

Swope Park Pool is the oldest major swimming pool in Kansas City, built more than 80 years ago, and available to all residents.

But for a time, not everyone was allowed to swim there. Like much of the city at the time, it was segregated.

Then it shut down for two years as it fought to continue its segregation after a judge ruled it must allow Black people in its doors.

Now, the pool is closed for repairs.

Alice Kitchen asked ”What’s your KCQ?,” a community reference project with The Star and the Kansas City Public Library to look into the history of segregation at the pool. 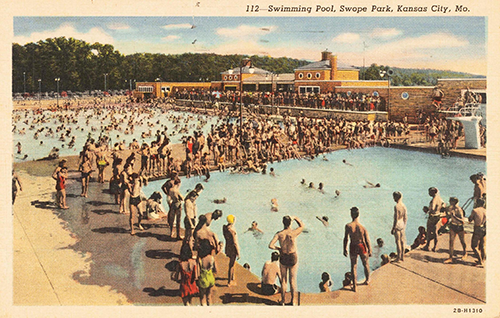 A postcard shows a scene from the Swope Park swimming pool before it was desegregated.

Kitchen, 79, remembers her mom would take her and her older sister to Swope Park’s swimming pool in the late 1940s. They would meet a counter clerk who would give them a locked basket and a key so they could store their clothes after changing into swim suits.

“We had a glorious time, it was just plain fun swimming in the pool,” Kitchen said. “I was remembering how special it was at that time and it was closed down and that fun just went away. I didn’t quite understand why, for a long time.”

We dove into records kept by the library and through decades of newspaper clippings to learn more about Swope Park Pool and what happened to it during the Jim Crow era and segregation.

But, at the time, The Star undercovered the Civil Rights movement and failed, in many ways, to cover the Black community​ as a whole — so clippings, at least in our archives, were scarce. The Star Editorial Board backed the two-year closure, fearing that an integrated swimming pool would lead to racial violence and wouldn’t generate as much money as a segregated swimming pool. Neither outcome came to fruition.

Why did Swope Park Pool close?

After a 1951 lawsuit by three Black people was filed challenging the segregation at the pool, a judge ruled in their favor. The pool, however, was closed for two years during an appeals process.

In 1951, the Kansas City City Council voted to eliminate some forms of segregation, including at public events held at the Municipal Auditorium, the Municipal Air Terminal and the Starlight Theatre, The Star reported on May 22, 1951. But the City Council didn’t vote on Swope Park Pool because the council thought that a swimming pool in a different part of the city — primarily used by Black people — offered an equal solution.

Swope Park’s swimming pool was advertised as a big improvement in Kansas City. The swimming pool was going to be three-units with facilities for 3,000 people. The pool was originally supposed to cost $180,000 but it would become a Works Progress Administration project under President Franklin D. Roosevelt’s New Deal, which aimed to lift the country out of the Great Depression.

The three-unit aquatic center was made up of a 105- by 60-foot swimming pool, a deep diving pool and a children’s wading pool. The public pool served a large crowd of white swimmers every year.

For Black residents of Kansas City, there was the much smaller Parade Park Pool at 17th Street and The Paseo. It had cost $60,000 to build, lacked a concession stand and only consisted of one swimming area. It held a maximum of 250 people compared to Swope’s 3,000.

A month later, the city was notified that three of the six residents — Esther Williams, Lena Rivers and Joseph Moore — intended to take it to court. The lawsuit was filed by Almer T. Adair, a lawyer for the NAACP, on behalf of the three. The NCAAP financed the suit, The Call, a Kansas City newspaper serving Black Kansas Citians, reported on Aug. 10, 1951.

The lawsuit argued that denying the three residents entry violated the 14th Amendment of the U.S. Constitution. The lawsuit also pointed out a racist hypocrisy: Black people paid taxes that helped fund Swope Park and its amenities — including the pool they weren’t allowed to use.

“The petition further stated a ‘substantial amount’, if not all, of the money used for the maintenance ... of the pool is derived from public tax funds contributed directly or indirectly by these plaintiffs and others in like circumstances,” The Star wrote on Aug. 10, 1951.

Instead of integrating, pool closes

The trial had no jury and lasted one day.

At one point during the trial, Thurgood Marshall — one of four lawyers on the case brought in by the NAACP, and who would become the first Black Supreme Court Justice in 1967 — asked a member of the Kansas City parks board, “Do you consider the Parade Park pool equal to the Swope Park pool?”

“Equal as to what?” the member replied.

“Equal as to anything,” Marshall said.

Judge Albert A. Ridge sided with the three plaintiffs in April, writing in his 28-page opinion that the Parade Park pool was not equal to Swope Park’s swimming pool.

“For this reason, Judge Ridge said, the city’s refusal to admit Negroes to the Swope pool is a denial of equal protection under the fourteenth amendment to the federal constitution,” The Star wrote April 9, 1952.

But it didn’t end there. After Ridge gave his decision, the city appealed the ruling. The city also filed a motion to deny Black people access to Swope Park’s swimming pool until the appeal was heard by a higher court. Ridge denied the motion immediately.

So instead of letting Black people through its doors, the park board voted unanimously in May 1952 to keep the pool closed until a final decision was made on the city’s appeal. In June 1953, the 8th U.S. Circuit Court of Appeals in St. Louis ruled that Kansas City did not have the right to bar Black people from attending, The Star reported on June 13, 1953.

A week later, Swope Park’s board announced that the pool would again remain closed “until all litigation” regarding integrating the pool was over, The Star reported on June 25, 1953. Even though the District Court in Kansas City and the Court of Appeals had both ruled Black people must be admitted — or an equal pool would have to be constructed — the city hoped to present the case to the Supreme Court. Constructing a pool of equal size and quality was not financially viable for the city.

But in October 1953, the Supreme Court refused to hear the case on appeal. In March 1954, Swope Park’s board voted to open the pool that summer.

Swope Park’s pool officially reopened again on June 14, 1954. For the first time since the pool’s opening more than a decade before, everyone was allowed to use it.

​The Swope Park Pool case was decided two years before Brown vs. Board of Education, the landmark Supreme Court case that declared school segregation unconstitutional. It was one of several lawsuits during the 1950s and 1960s that challenged racial segregation in the United States before the passage of the Civil Rights Act in 1964.