UPDATED Question: What happened to all the Christmas decorations that used to be downtown, particularly the crowns strung across the streets with garland?

In our first response to this question (read it here), I reported that the Merchants Association began displaying crowns at busy downtown intersections in 1957. Thanks to an observant reader with a special connection to the crowns, I now realize that this date is incorrect. In fact, evidence points to the crowns first being installed in 1962. 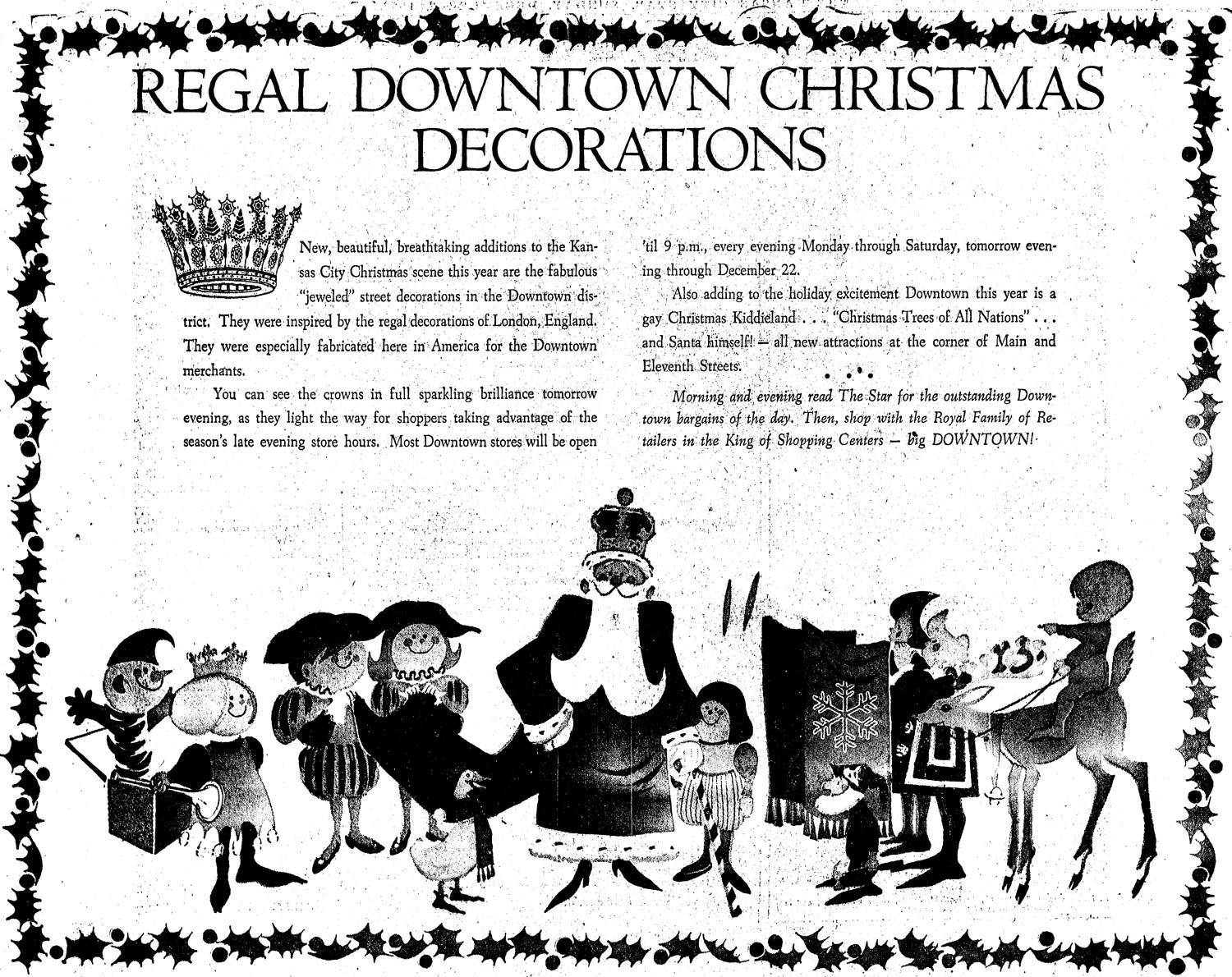 That’s when George Purucker, who specialized in illuminated retail displays, approached the Merchants Association with the idea. A World War II veteran, Purucker had come to the Kansas City area from Pennsylvania in 1946. He was a graduate of the Carnegie Institute of Technology in Pittsburgh, and found work as a lamp specialist for the General Electric Supply Company before starting his own display business in 1959. Purucker filled a need for the rapidly expanding retail centers springing up south of the city and in Johnson County, gaining contracts for several J.C. Nichols developments, the new Ward Parkway Shopping Center, and handling outdoor holiday displays for numerous area cities. 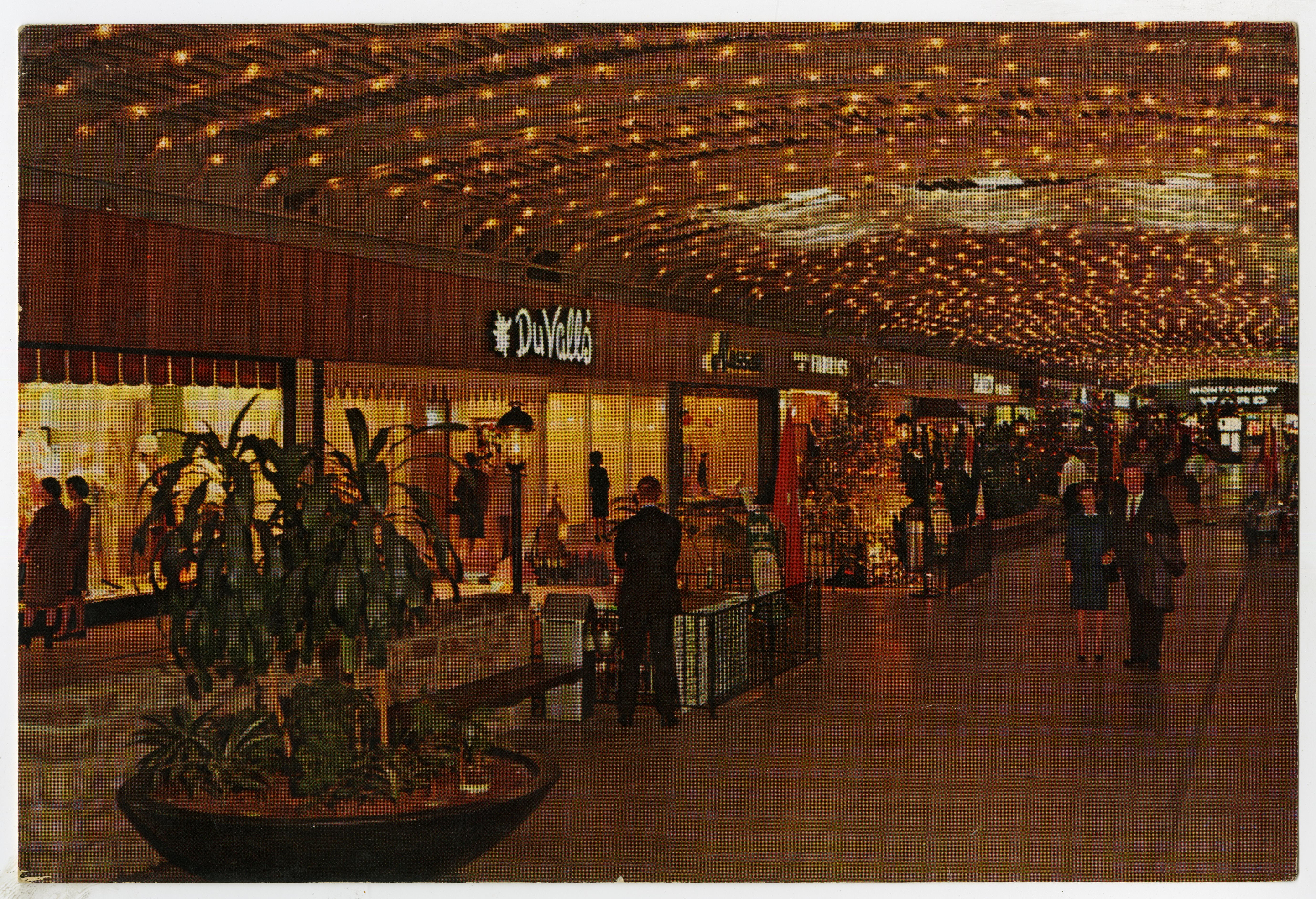 Always on the lookout for new ideas, while on a trip to England during the holidays he noticed large, illuminated crowns adorning their retail districts. Purucker thought they would be just the thing to help drive shoppers back to downtown stores in KC. 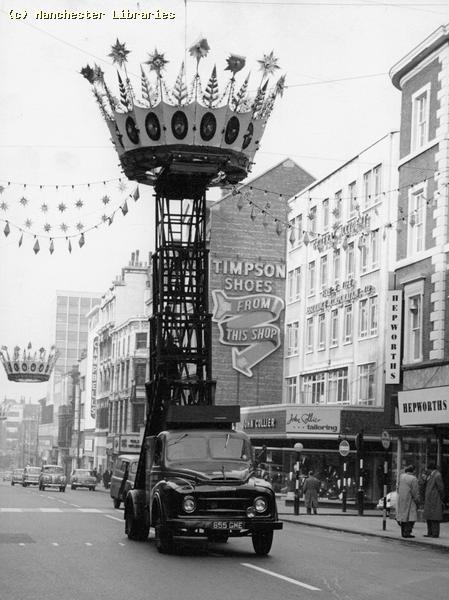 Christmas crown being installed in Manchester, England. Courtesy of the Manchester Libraries, Information and Archives. 1962

Perhaps it was the symbolic connection to the American Royal – Purucker served on the organization’s board of governors – or perhaps it was simply the Christmas cheer the crowns seemed to inspire in the shoppers passing below. Whatever his thinking, the Merchants Association loved the idea and promptly ordered a set of nine crowns at a cost of $38,000. The Kansas City Star described the new crowns as each being equipped with 1,621 bulbs, putting out enough illumination to “light 30 homes,” and having been manufactured in an Oklahoma City plant. 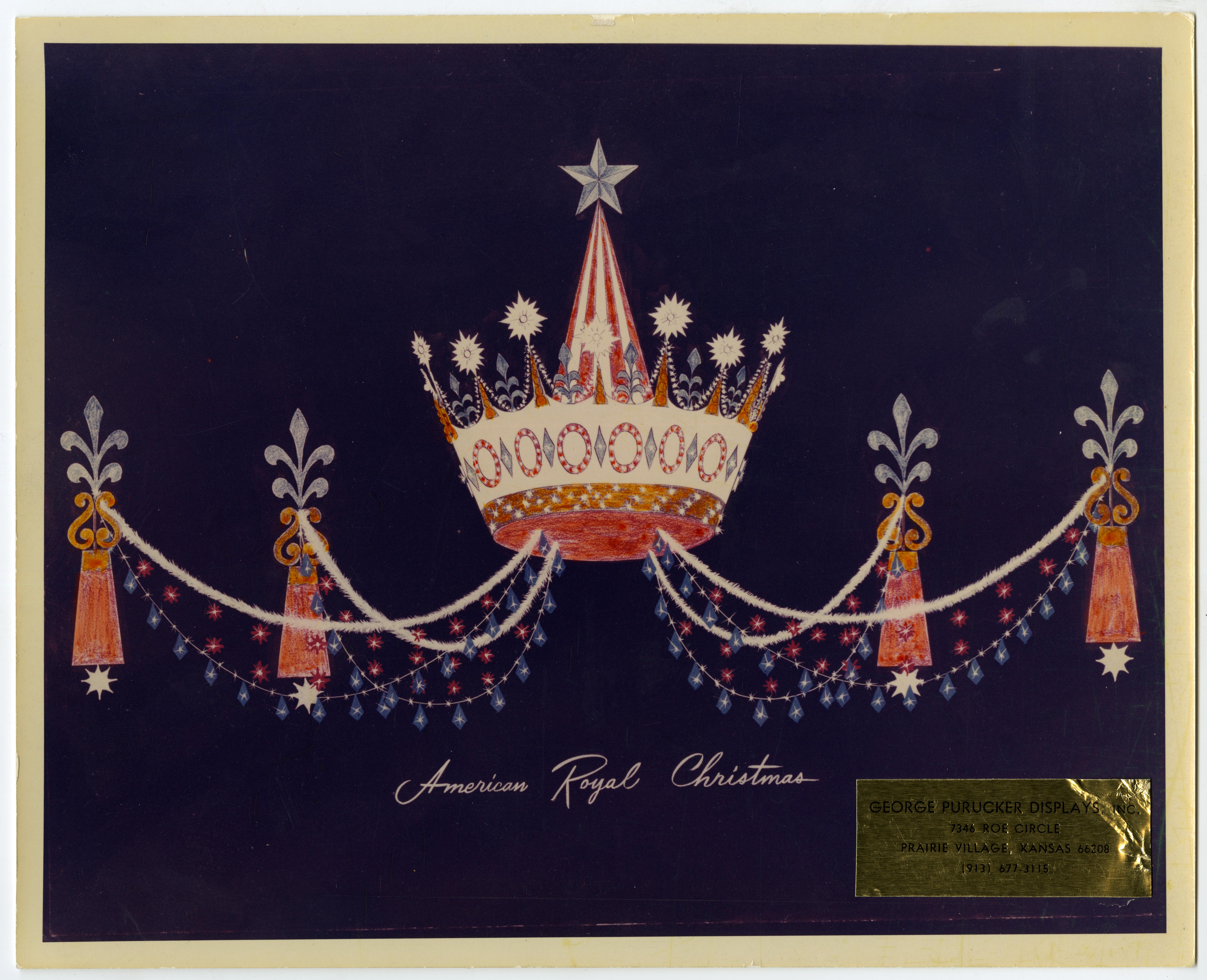 Ann’s hard work paid off with the crowns being switched on for the first time on Friday, November 23, 1962, the day after Thanksgiving. 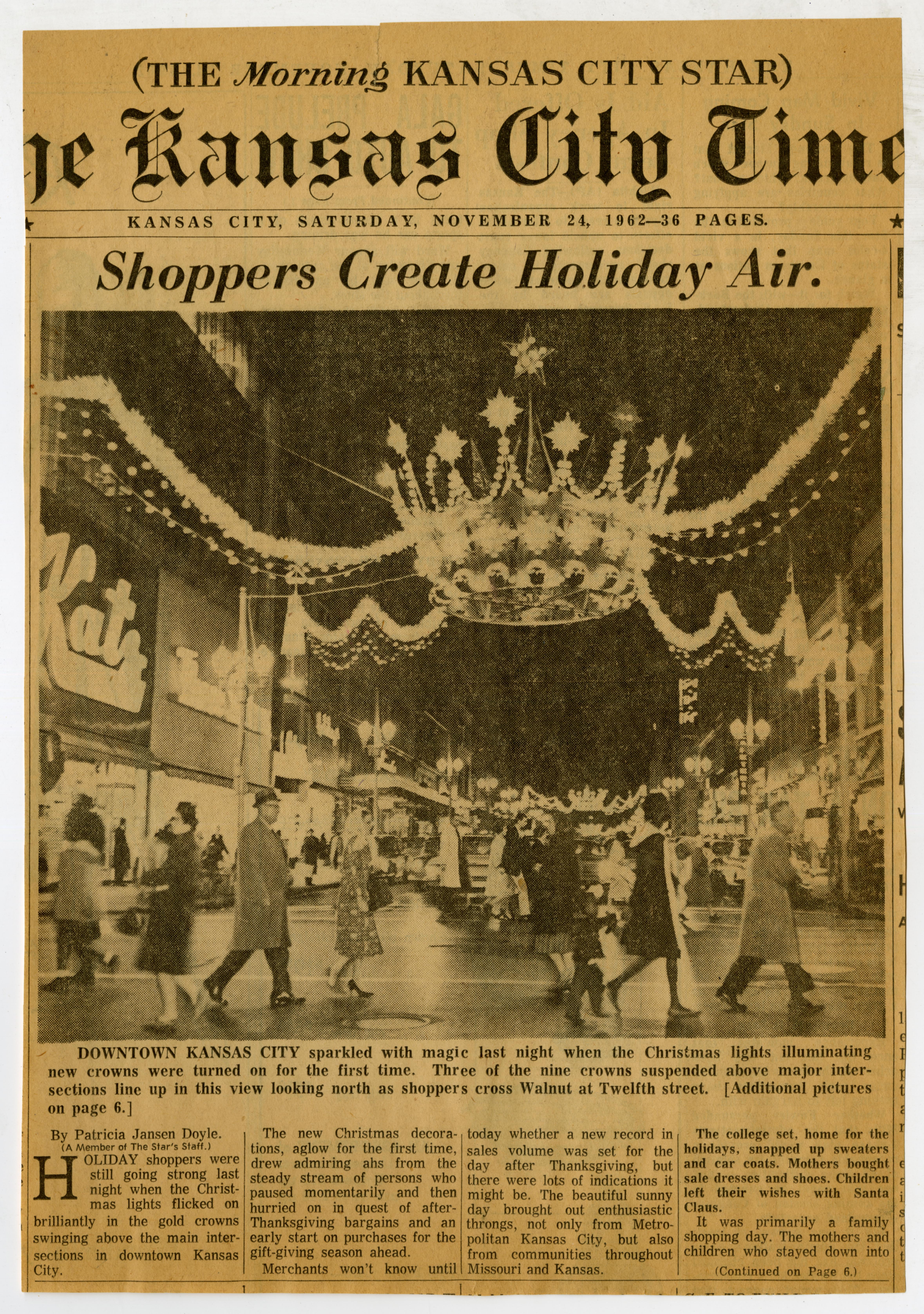 Kansas City Times clipping covering the lighting of the crowns. 1962

She also notes that the images posted in our previous response must have been taken in 1962 when the crowns were first installed according to her father’s meticulous standards. Due to variations in building and street sizes at the nine downtown intersections with a crown, each connecting streamer had to be uniquely sized. She recalls that workers installing the crowns in subsequent years and lacking her father’s supervision were unaware of the specific streamer lengths and never seemed to get them right. 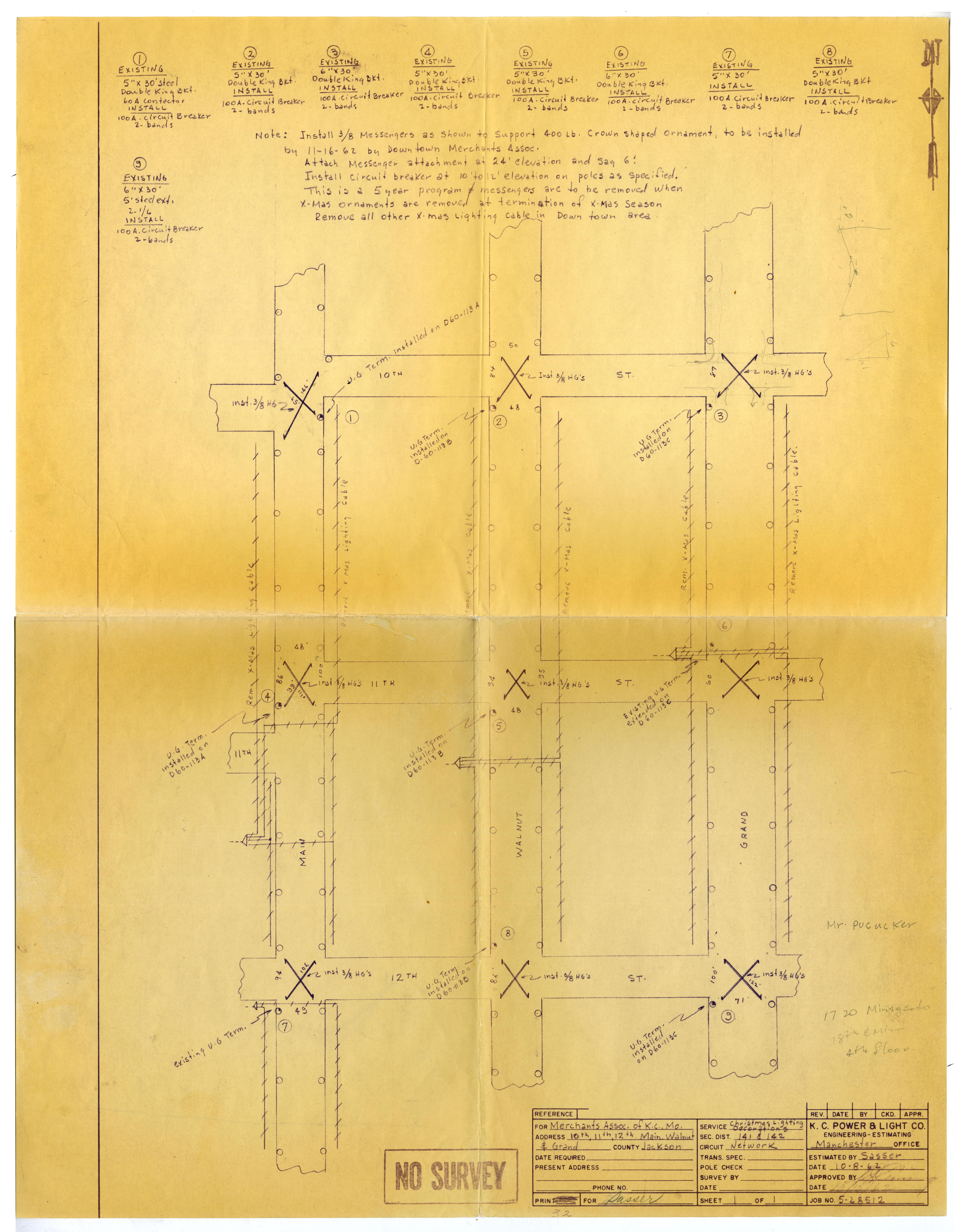 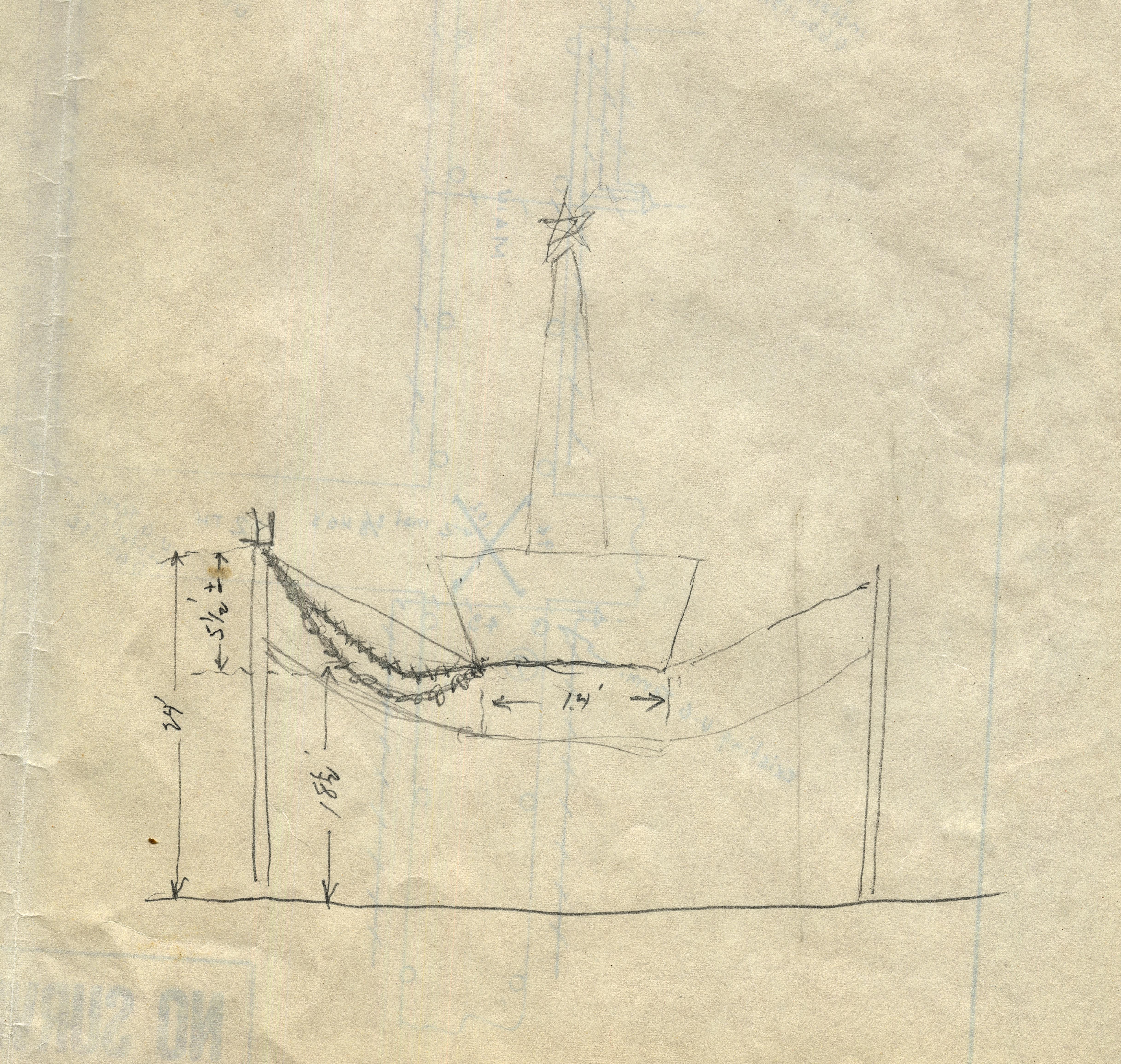 Pencil drawing detailing the installation of a crown located on the back of the map displayed above. Courtesy of the Purucker family. 1962

Ann and her mother Mary Ellen became more involved with the business over the years, helping it expand to serve clients in Missouri, Kansas, Arkansas, and Oklahoma. The duo fully took over operations after George passed away in 1979, continuing to help make the holiday season a little more special for Kansas Citians, until finally selling the company in 1984.

As for the current location of the crowns, which made their last holiday appearance in Kansas City in 1976, the Purucker family unfortunately doesn’t have a clue. Nor does anyone else, it appears. This question came up recently as part of the Library’s all-things-local, “What’s Your KC Q?” collaboration with The Kansas City Star. The answer:

The larger crowns remained in storage for a time, before reportedly being sold to the city of Holton, Kansas, to be refashioned into jungle gyms. Writing for The Kansas City Star in 2004, Tim Engle reported that no one in the Holton city clerk’s office, even the old timers, had any memory of the purchase. For the time being at least, the fate of the original downtown crowns remains a bit of a mystery. 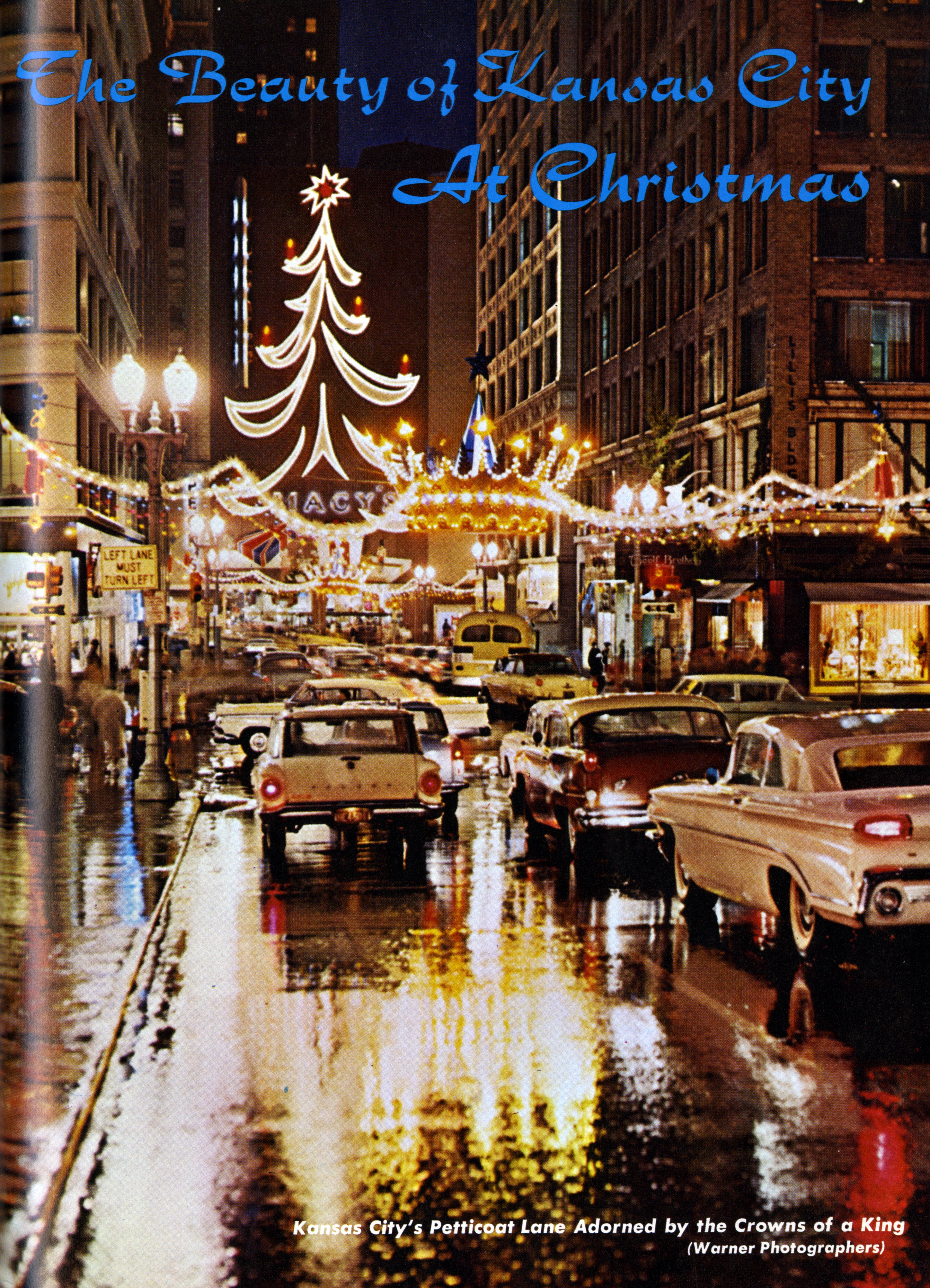