Question: What happened to all the Christmas decorations that used to be downtown, particularly the crowns strung across the streets with garland?

A timely question as we enter holiday light season in the Kansas City area. Short of digging through the attic at City Hall, my first thought was to consult Monroe Dodd’s 2001 book Christmastime in Kansas City: The Story of the Season. 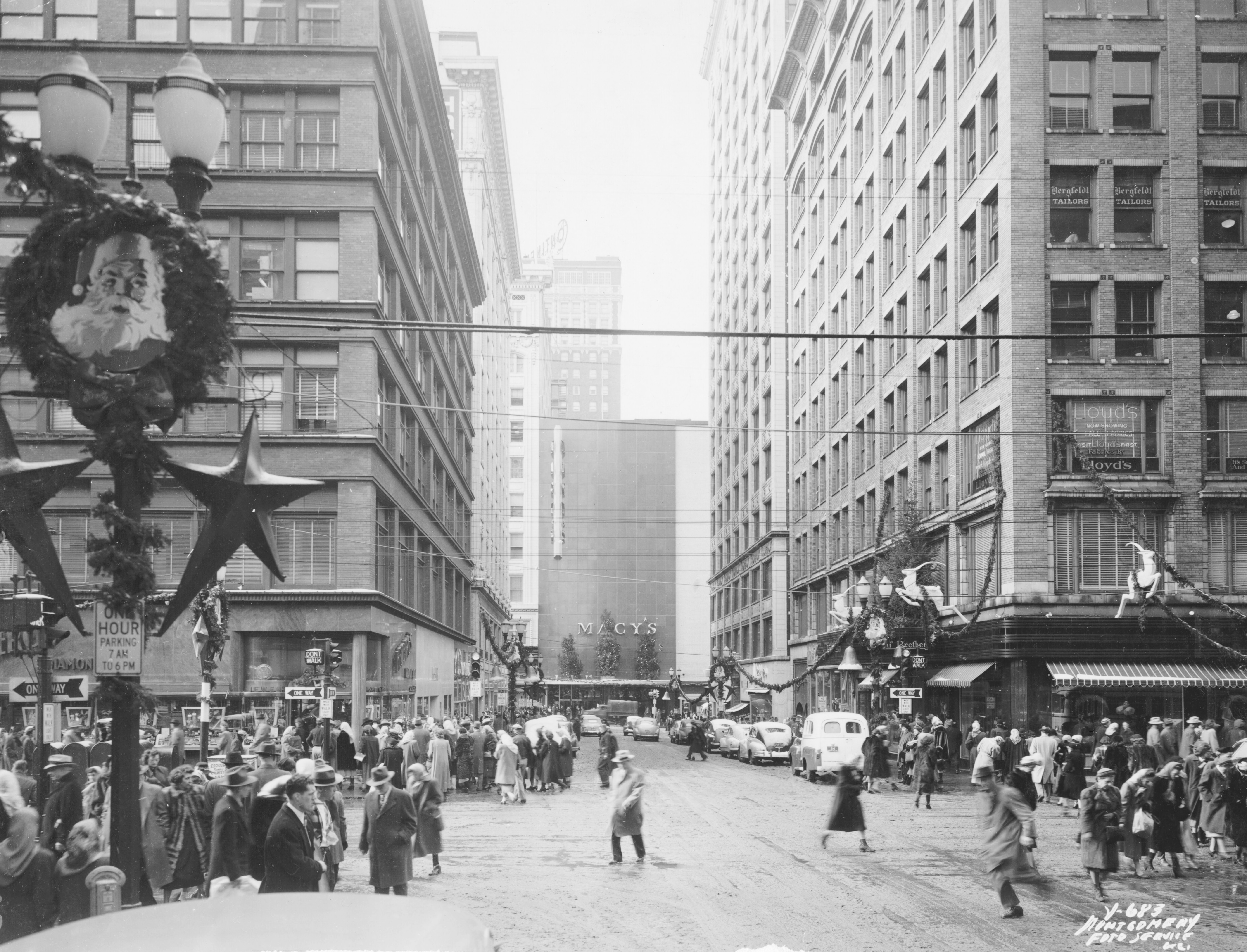 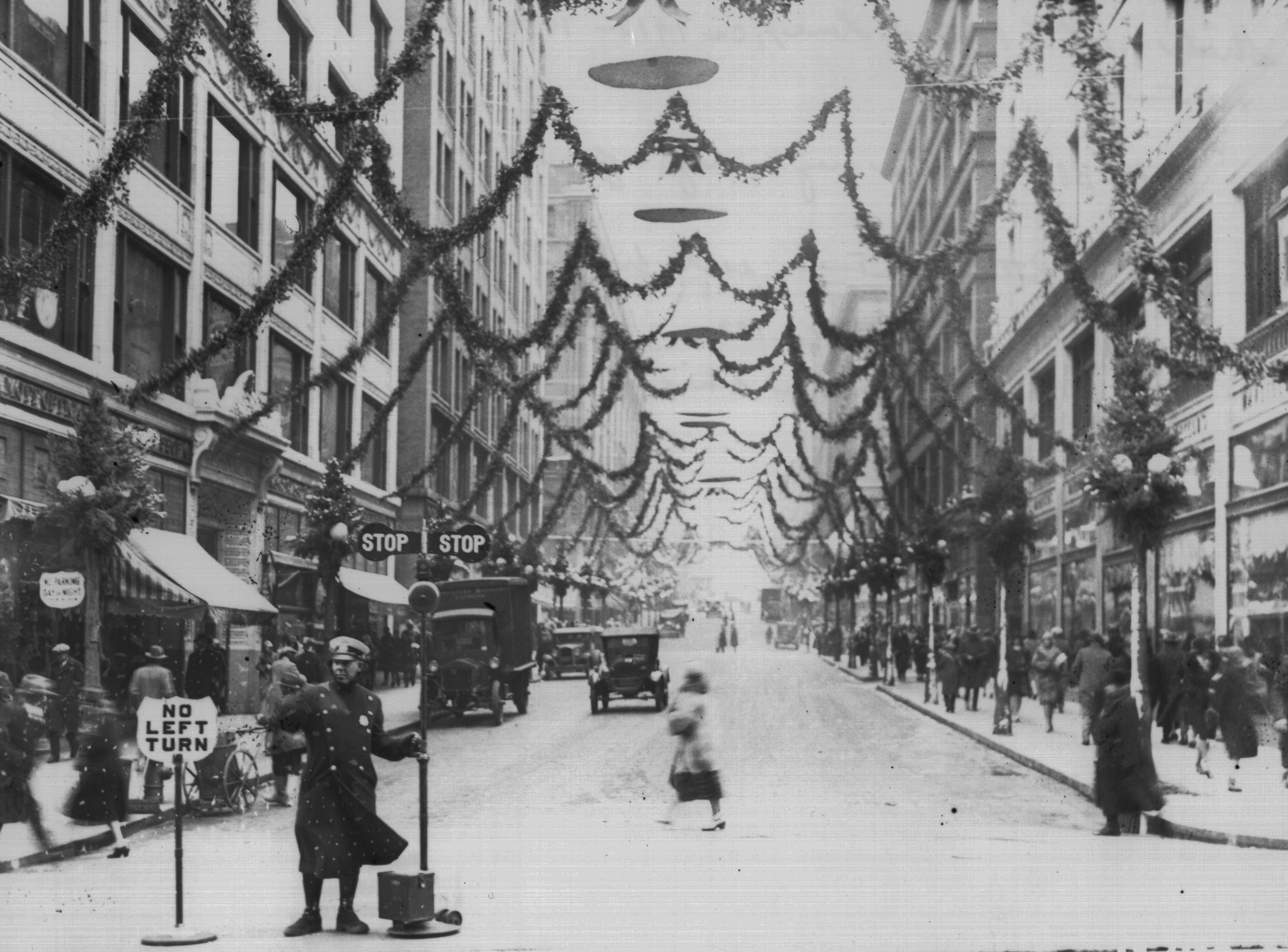 According to Dodd, the Christmas shopping season was a modest affair in the years before World War I. The economic boom that followed the war changed things, and beginning in 1924, a group of downtown retailers pooled their resources to festoon the streets with garland and other decorations. In 1925 they added a parade to kick off the holiday season. 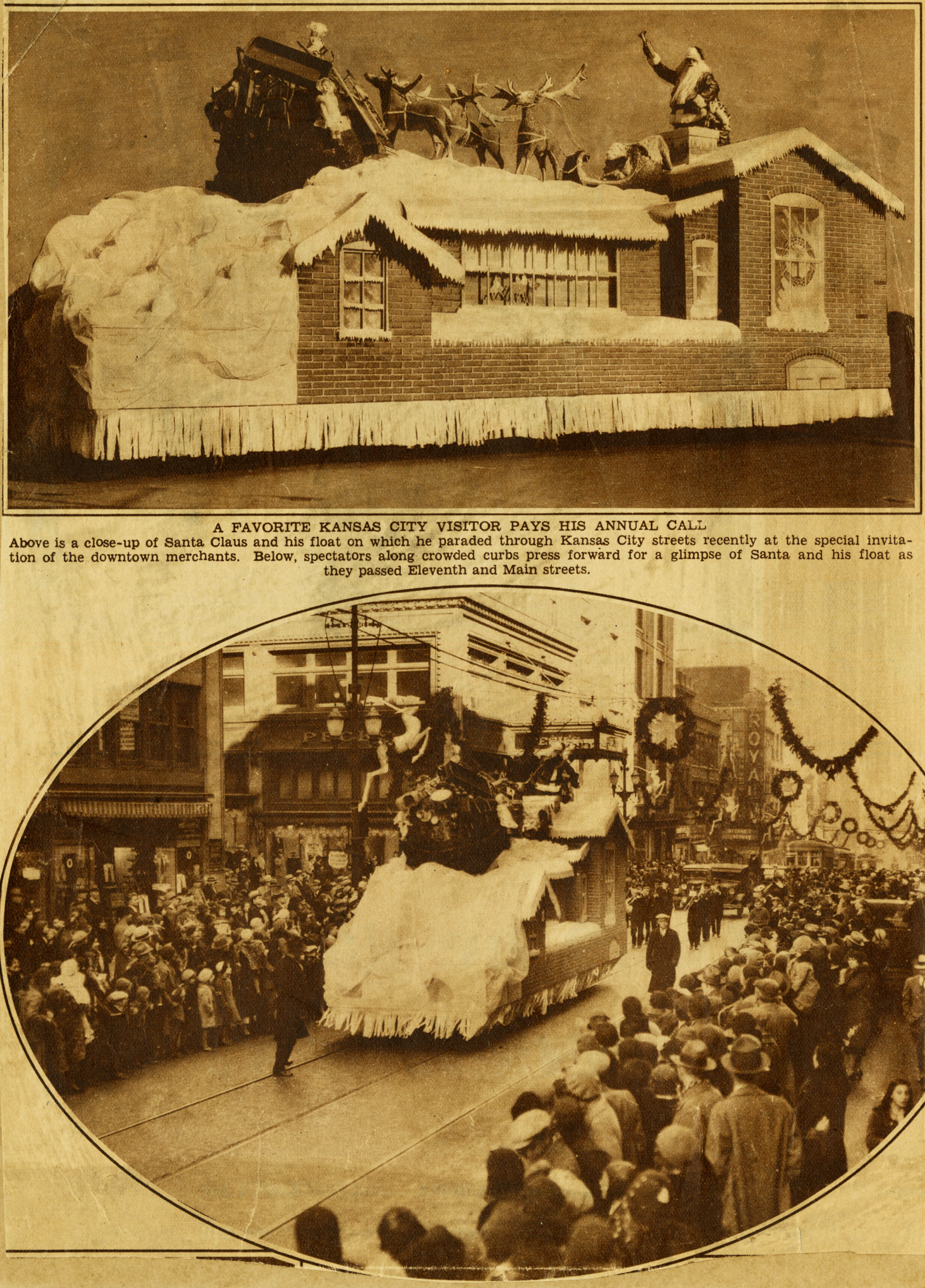 As you might have guessed, holiday shopping took a hit during the Great Depression. The parade was even called off for two seasons beginning in 1930. In what must have been a signal of things to come, a new retail development to the south, the Country Club Plaza, held its first organized Christmas lighting ceremony that same year. 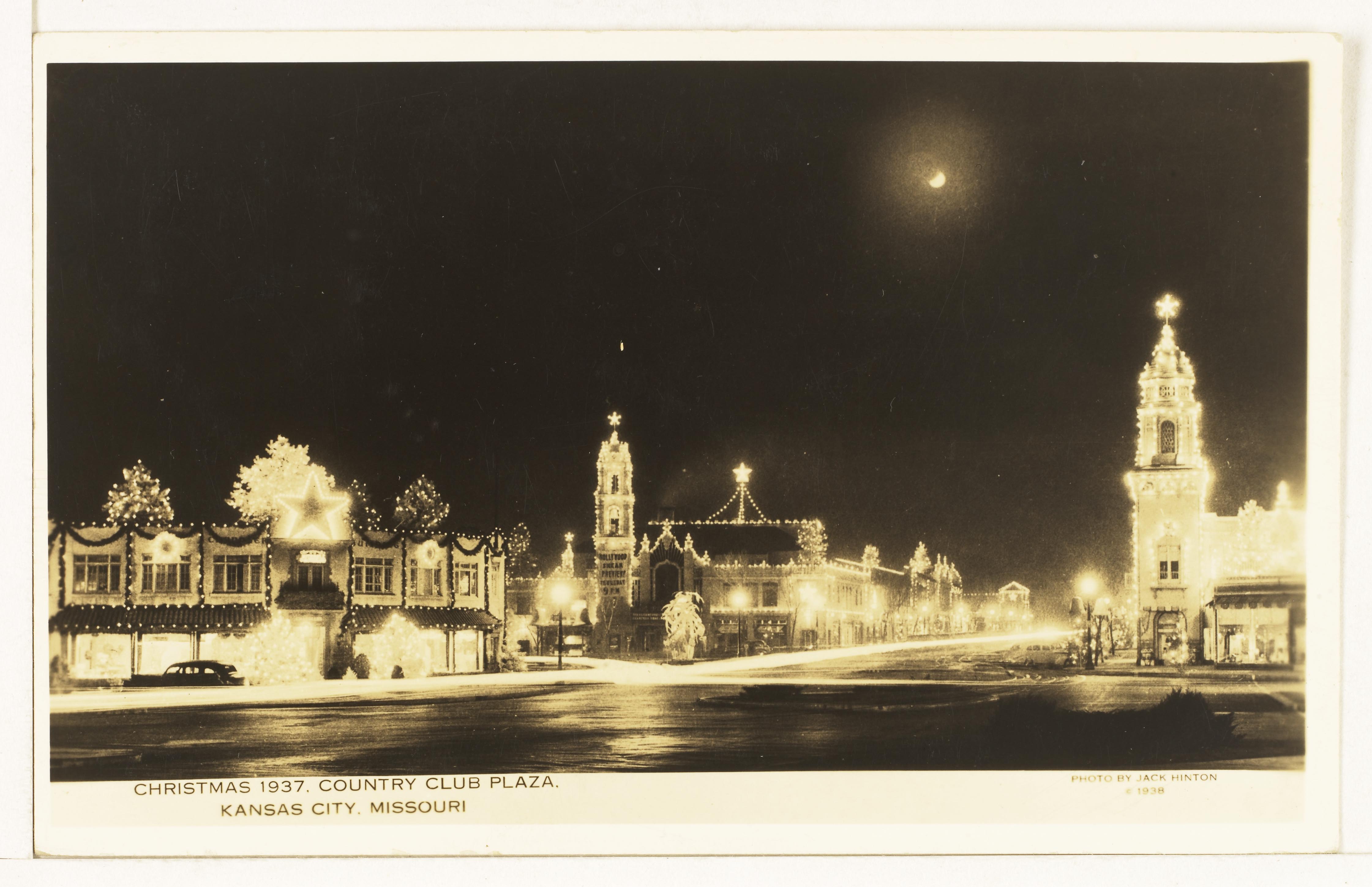 Even with the rise of the Country Club Plaza and other shopping destinations, downtown retail sales remained stable throughout World War II. Just like in the 1920s, spending really picked up after the war, driven by a period of unprecedented prosperity in American history. And while the Downtown Merchants Association (DMA) was poised to take advantage of the economic boom, the forces working against them must have been daunting. Each year cheaper and cheaper automobiles and the rush to the suburbs made downtown trips less and less attractive to shoppers. 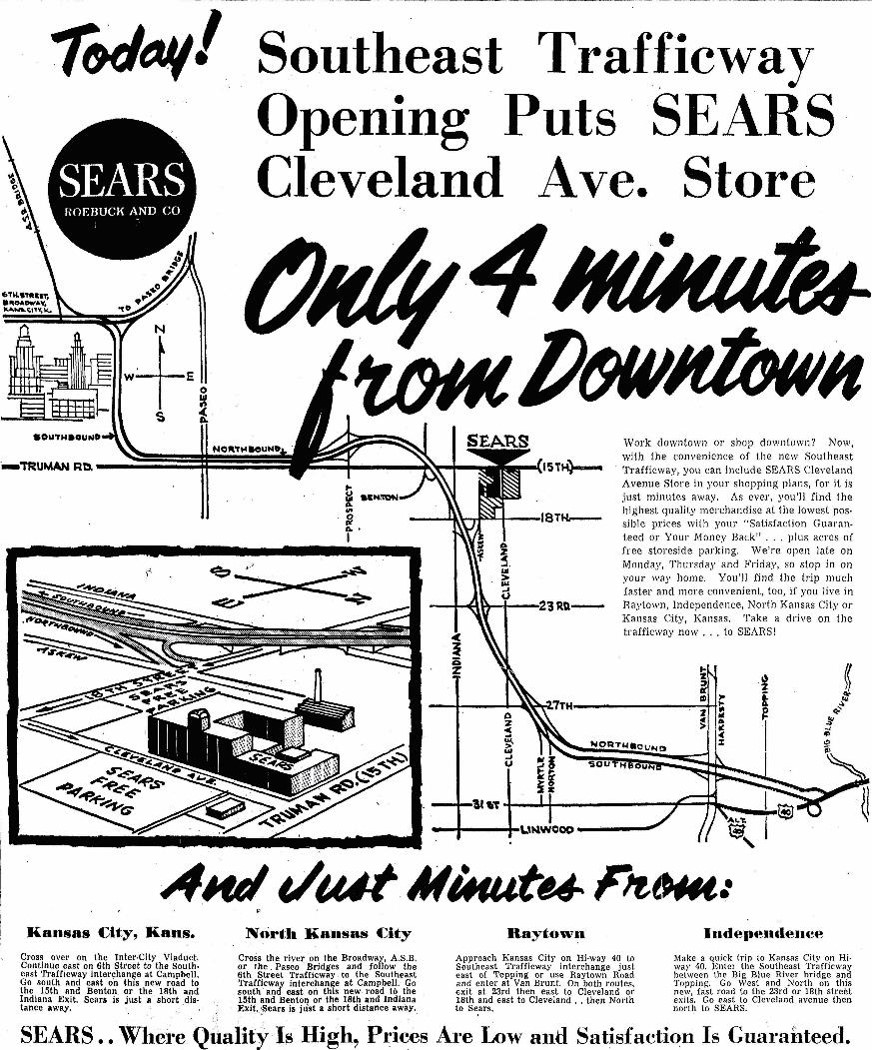 Advertisement promoting the use of new expressways to bypass downtown – 1962

Hoping to make the downtown experience worth the trip, in 1957 the DMA drew up plans for a set of Christmas crowns to be suspended high in the air to dazzle shoppers. The Mannequin Company of Independence, Missouri (now Manneco, Inc.) was contracted to fabricate the crowns, each being about 13 feet high, 17 feet in diameter, and weighing approximately 2,000 pounds. 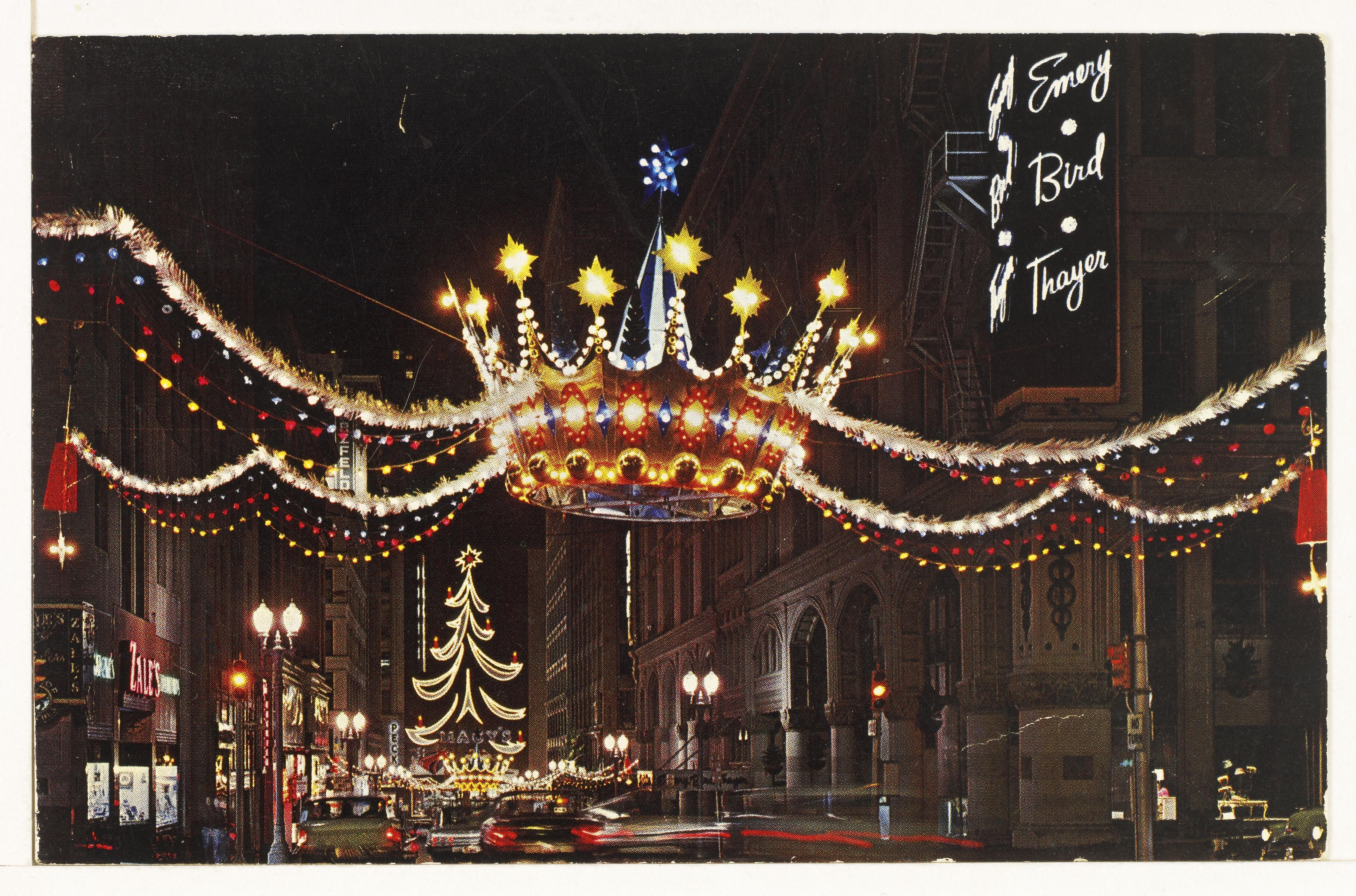 Installing these behemoths each November was quite the undertaking. Specially designed brackets were attached to the 3rd floor of each building at key intersections in the retail district, aircraft grade cable was attached to the crowns, and they were hoisted into position from a flatbed truck. In addition to the manpower needed to install the crowns, a great deal of electricity was also required to produce their warm holiday glow. In fact, each required a dedicated electrical transformer to safely power its over 100 60-watt light bulbs. 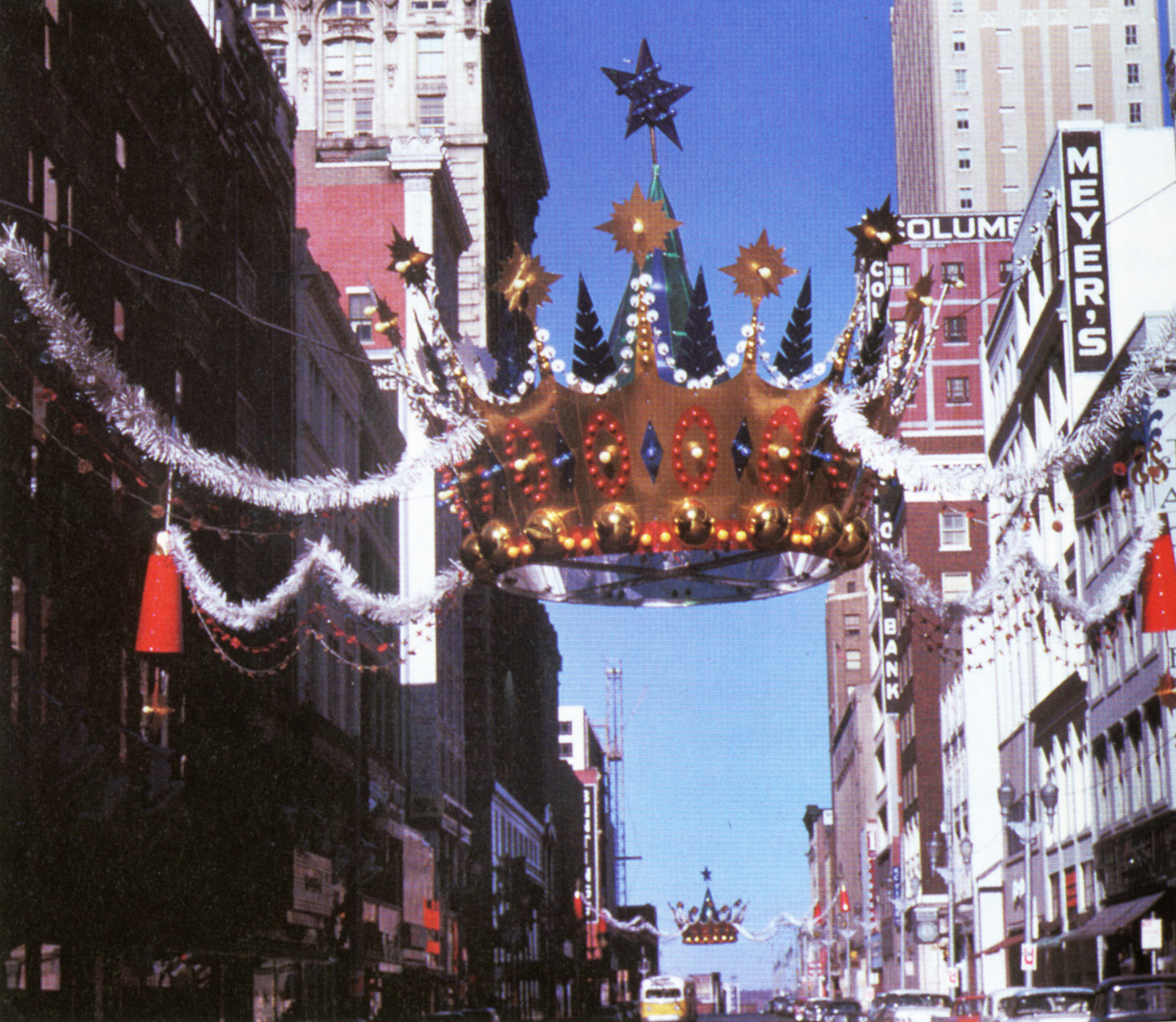 The original crowns were displayed each Christmas season through 1966. The winter elements were hard on them over the years, and a new set of lighter weight, more energy efficient crowns were ordered for Christmas 1967. The DMA also ordered a set of smaller crowns that could be mounted to streetlights.

Unfortunately downtown retail continued to decline through the 1970s, the crowns making their final appearance for Christmas 1976. 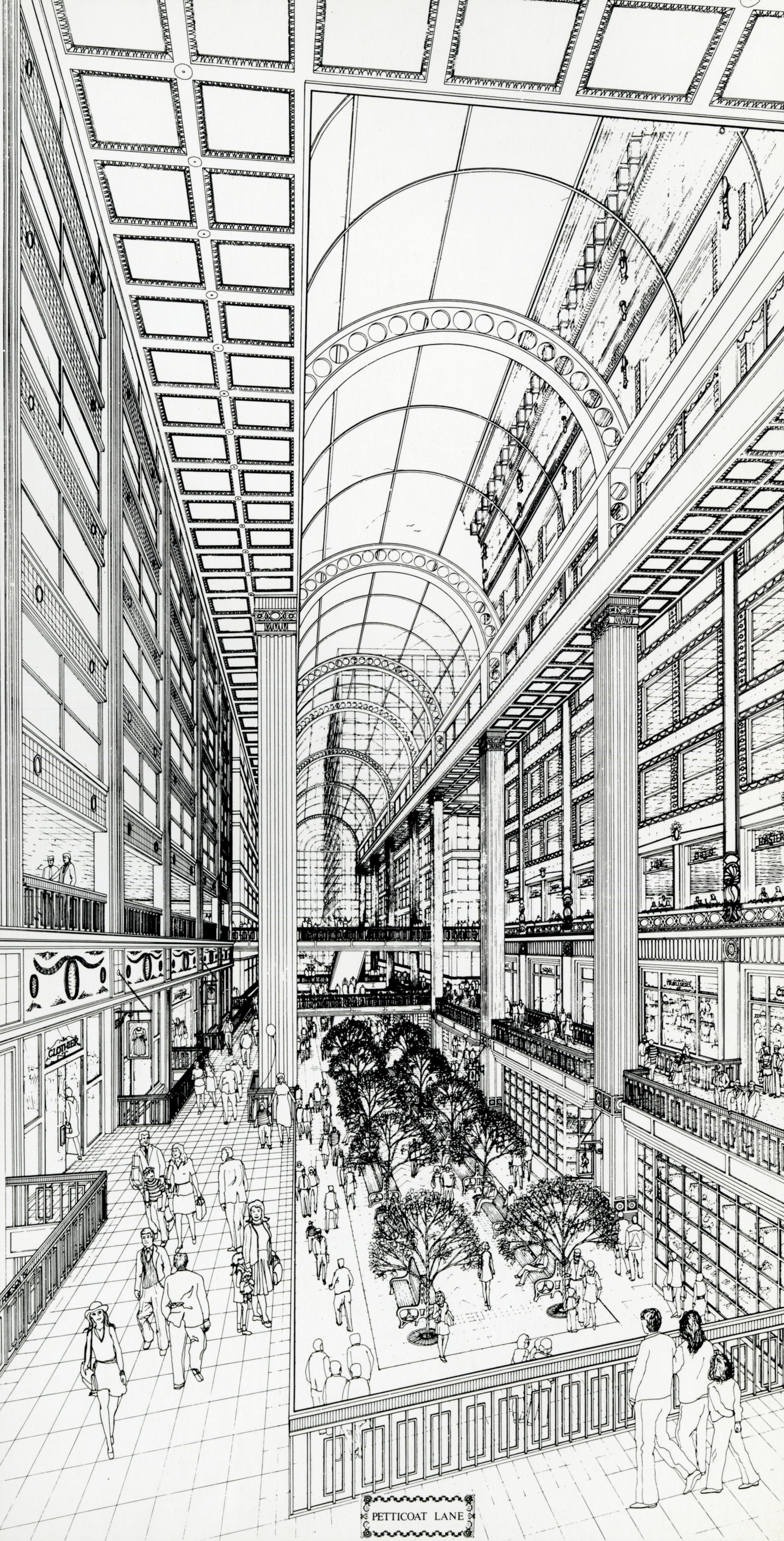 In addition to evolving shopping habits, big changes to the downtown architectural environment also contributed to their demise. Safely installing the crowns required a building at the corner of each intersection. With Kansas City deep in the urban renewal era, buildings in the downtown retail district were coming down fast. Even if the DMA had wanted to keep displaying the crowns, it simply wasn’t physically possible for them to do so. 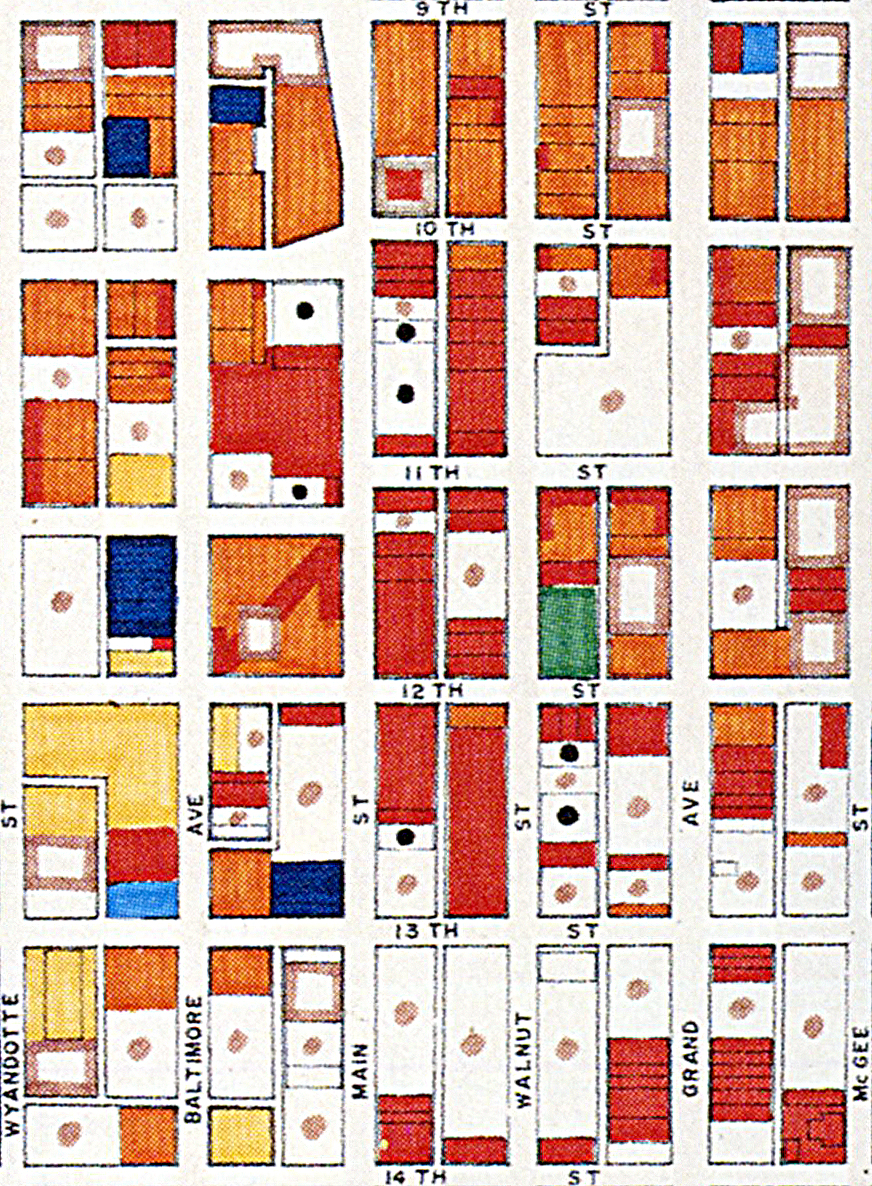 Already struggling against competitors outside of the city center, the opening of Crown Center in the 1970s and modern shopping malls across the metropolitan area drew even more shoppers away from downtown. 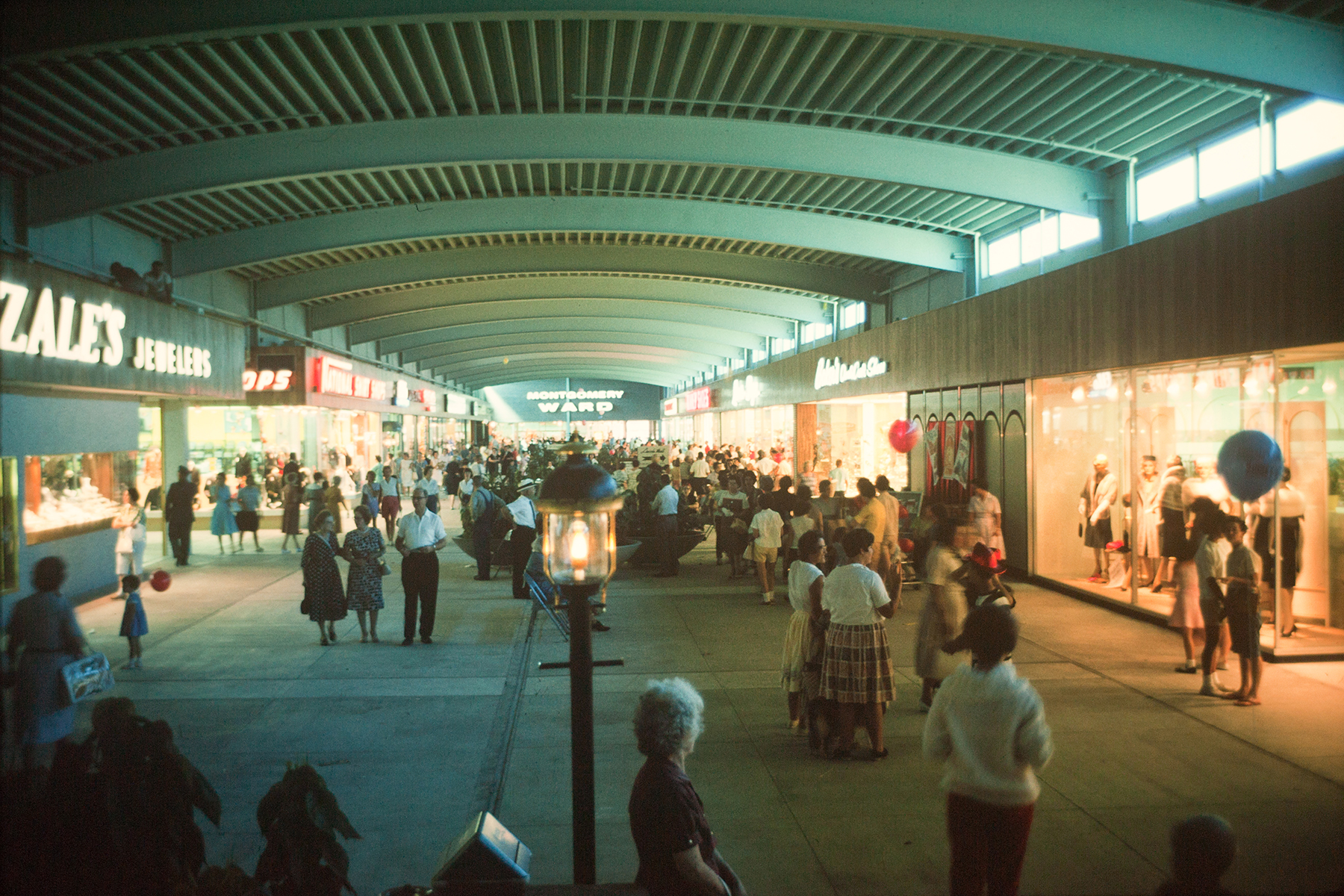 With the future of downtown retail uncertain, the larger crowns were put into storage. The smaller streetlight crowns continued to appear until the early 1980s when the DMA was unable to raise the funds to light them. Shortly thereafter they were sold to Kansas City, Kansas, and were used to decorate their downtown streets through the early 1990s.

The larger crowns remained in storage for a time, before reportedly being sold to the city of Holton, Kansas, to be refashioned into jungle gyms. Writing for the Kansas City Star in 2004, Tim Engle reported that no one in the Holton city clerk’s office, even the old timers, had any memory of the purchase. For the time being at least, the fate of the original downtown crowns remains a bit of a mystery.

Those interested in learning more about Kansas City’s Christmas traditions can check out a copy of Dodd’s book at their local Kansas City Public Library branch. Additional details for this article were found within the Missouri Valley Special Collections Christmas vertical file, which can be viewed by visiting the Missouri Valley Room on the 5th floor of the Central Library.

Read the follow up story about Kansas City’s Christmas Crowns