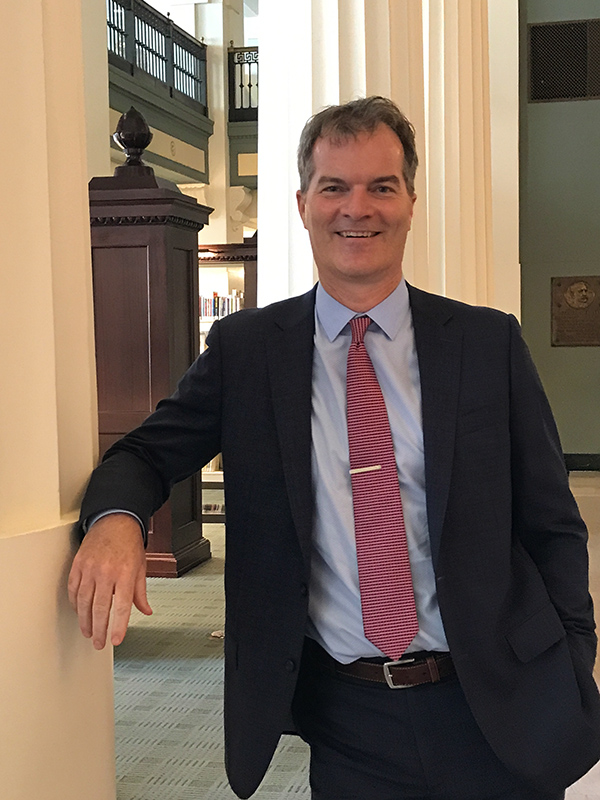 ► Originally from: Northwestern Montana. Grew up just outside Kalispell, next to Glacier National Park. His father, a native of Alberta, Canada, was a wheat and barley farmer who became an eighth-grade math teacher. “It was a very idyllic, Tom Sawyer-esque, outdoor life,” Herron says. “It’s going to sound a little nerdy, but I loved to read. We had this kind of rural existence, and books were the only way I could travel.”

►Education: Graduate of Montana State University, where he originally majored in mechanical engineering but left with a degree in history. Earned a Ph.D. in American history from the University of New Mexico in 2001.

►Academic career: Taught at Tufts University in Boston and the University of San Diego before joining UMKC’s Department of History as an assistant professor in the fall of 2003. He rose to professor and associate director of the UMKC Honors College, then to interim dean of the College of Arts and Sciences. Academic specialty is 19th-century American social and cultural history.

► Family: Wife Jennifer Frost is a family practice physician who is interim chief medical officer for Swope Health Services. They have an 18-year-old daughter and 13-year-old son.

All things being equal, John Herron says he’d prefer to assume leadership of the Kansas City Public Library in more conventional times. Instead, he’s wearing a mask – so are his new staff and everyone else who’s out and about in the city – and preparing to steer the 147-year-old institution through the epochal challenge of a pandemic.

“So much is unknown,” Herron says. “But by the same token, the unknown shouldn’t have to be crippling. It creates these moments of possibility.

“Historians,” he notes, “talk about moments of possibility all the time.”

Herron takes over as the Library’s new director on Monday, July 6, 2020, transitioning from a two-decade career in higher education. He spent the past 17 years at the University of Missouri-Kansas City, where he started as an assistant history professor – indeed, he’s a historian – and rose to interim dean of the College of Arts and Sciences and associate vice provost for innovation.

He succeeds Crosby Kemper III, who was the Library’s director for 15 years before departing in late January to head the federal Institute of Museum and Library Sciences. Assistant Director and Chief Operating Officer Debbie Siragusa has served as interim director since then.

Herron arrives with a game plan that, of course, must be weighed initially against the impediments of the COVID-19 pandemic. He wants to expand the Library’s role as “a community center, a public square, a think tank … helping our citizens figure out the world they inhabit,” he says. He talks of establishing the Library as “the main repository” of local history and culture and spearheading efforts to study and lend scholarly perspective to that history.

He says he’ll look to build on the Library’s already substantial role in attempts to advance digital literacy. Drawing from an area of emphasis at UMKC, where among other things he was involved in the creation of a new Department of Race, Ethnicity, and Gender Studies, he pledges to promote diversity and inclusion through the Library’s public programming and other initiatives and hopes to “populate our libraries with staff that reflect the communities we serve.”

Here, Herron shares more on his move to the Library and his vision for its future:


This is a shift in course for someone on an upward track in higher education. After 17 years at UMKC, what interested you in this job?

John Herron: We are broadly defined, in every role at the Library, as educators. If I’m able to take the skills I learned in the academy as a student, as a scholar, and then as an administrator and apply them to this type of form – education broadly defined, in a community-engaged world – then I think this job makes perfect sense.

Specifically, what skills from your experiences as an educator and historian can you adapt to this job?

JH: My goal in becoming a historian was to figure out ways in which we can use an understanding of the past to better understand the present. If we understand the social, political, and economic environment (of a particular time) and it led to this outcome, can we better prepare now? Can we better adapt? Can we learn from the past to prepare for our present? There’s where I think there’s definitely a crossover between the two jobs.

How do we take all the different, broken-up pieces of knowledge … and put it together in a form that our fellow citizens can use and understand? Academics, and historians in particular, are very good at that. I think the Library does that, as well. Putting people in the same room for a conversation. Figuring out all the different resources in the community that we can put together to solve a problem.

The Library’s public programming is one obvious avenue for that. What others do you see?

JH: Public programming (in person) is certainly something that I can’t wait to get started again post-COVID, when it’s safe for us to gather as community and hear authors and other speakers. That was the first thing that attracted me to this job. By the same token … the kinds of social services we can provide, whether it’s giving the underserved members of our community access to the internet or helping a student fresh out of high school or college with resume building and a job search, are community resources that at their heart are educational. I would hope that colors everything, not just our public programming.

JH: There are certainly opportunities in all things digital. The more that the many different community services offered by our branches can be delivered in a digital frame, the more attractive they’re going to be to our fellow citizens.

I think we should start doing more content delivery, start curating content and delivering it in an online world to provide more access. The Civil War on the Western Border website won basically every scholarly award that was available to that kind of enterprise. The number of online visits is remarkable (while) a very successful academic monograph, in print, is going to sell 500 copies. If you want to engage a community in discussion, you’re going to do it digitally.

And I think information poverty, the digital divide, and digital literacy are all campaigns that the Library should be focused on. We should be one of institutions in the community that helps provide access and services, that enables constituents who have talents but not opportunity (and) bridges some of the cultural divides that have long marked our community. Digital literacy can be the great equalizer.

How can the Library expand on the digital literacy and other social initiatives it already has in place?

JH: As the George Floyd protests have made clear, Kansas City is in many ways cleaved by issues of race and class. Yes, the Library has done a great job of being at the forefront of the initiatives that this city needs to be involved in to help bridge these divides. But let’s also understand that the city has a long way to go.

This is the challenge for the Library. How can we be involved at our branches to be part of this conversation? That’s what I’m referring to when I say: Wouldn’t it be great if the Library was more of a public square in a way in which they became sites of exchange and interaction, civil exchange and civil interaction? … It’s not just the books, right? The Library can be an engine for social change, a mechanism for social uplift.

How will extend your work toward diversity and inclusion at UMKC to the Library?

JH: I intend … to ensure that our all of our public-facing efforts reach as wide an audience as possible. Specific programming to meet the needs of our many different constituent groups, our efforts to help improve digital literacy, and the range of our public programs will continue to focus on community engagement and inclusion. Internally, it is my hope that we populate our libraries with staff that reflect the communities we serve.

Research has shown that the most diverse organizations are also the most open, innovative, and ultimately successful. We in the Library are not concerned with success in a traditional business sense, but we do want to create an environment that is as engaged as it is dynamic. A commitment to inclusion remains a key part of that promise.

What do you see as the Library’s position in arts and culture in Kansas City?

JH: I want the Library to be understood to be a cultural institution, first and foremost. Yes, it has an educational mission that is very practical, very utilitarian. But I don’t want people to think of the Kemper Museum and the Art Institute and the Nelson and the Folly and the Lyric and the Symphony and the Kauffman Center as one thing and see the Library as another thing over there. I want that envelope of arts institutions to include the Library, and I think that’s possible. It’s going to entail some advocacy work that we’re going to have to do and some education on the community’s part (about) what happens in these spaces.

I think we can have this conversation in other fields, as well. The Plaza Branch could partner with the Linda Hall Library, with MRIGlobal and the Stowers Institute for Medical Research, and suddenly you’ve got a scientific corridor. The Library is diverse enough, it has enough resources, to be many things to many people.

You assume leadership at an extraordinary time, amid the pandemic. What challenges does that pose?

JH: My concerns are economic and political but also (about) our infrastructure, and about where we are in our community. If we want to stay bottom line-oriented, the Library is supported by a property tax levy and I would not be honest if I didn’t say I was worried about what could happen to our finances. … We’re going to have to figure out how we can leverage community support, how we can leverage the resources of the city. Sometimes, it’s going to have to be a hard conversation about what’s our core mission and how we can best support that core mission. Does this mean that some of these things get reorganized in priority? Potentially so.

I’m worried about what post-COVID America looks like. Are there things that are fundamentally different because of this crisis, things we’ve done that we can no longer do in their traditional form? If so, we need to make sure we deliver them with the same high quality.

What I hope, of course, is that our citizens realize the Library is more important to their daily lives than they’d thought about. That we’re able to provide a suite of services that make it easier to navigate the hurdles that populate the rest of their lives. That we are, in many ways, a kind of safety net.