From Art to Aviation, Library Exhibits Highlight History and Community

Post date:
Tuesday, July 6, 2021
Library buildings have been back open for a over a month now, and one of the experiences patrons can once again enjoy in person is viewing exhibits in Library galleries and spaces. Below are the current exhibits on display at several Library locations; we invite you to visit and explore these celebrations of community art, culture, and history.

Over a period of nearly a decade, acclaimed photographer, artist, and filmmaker Judy Gelles posed three questions to fourth graders around the world. Who do you live with? What do you wish for? What do you worry about?

The students’ responses spoke to the common human condition and range of societal issues we face today – from violence and global hunger to immigration, the demise of the nuclear family, and the impact of media and popular culture. Gelles incorporated the images and words of 65 of the youngsters, from 10 different countries, in an absorbing traveling exhibition aimed at connecting visitors locally and globally and bridging cultural differences.

Gelles, who died in March 2020 at age 75, described herself as a “conceptual and photo-based artist using words and images to provide social commentary on who we are and how we think.” Her work is included in major collections including the Los Angeles County Museum of Art, Philadelphia Museum of Art, and the Museum of Modern Art in Rio de Janeiro, Brazil. 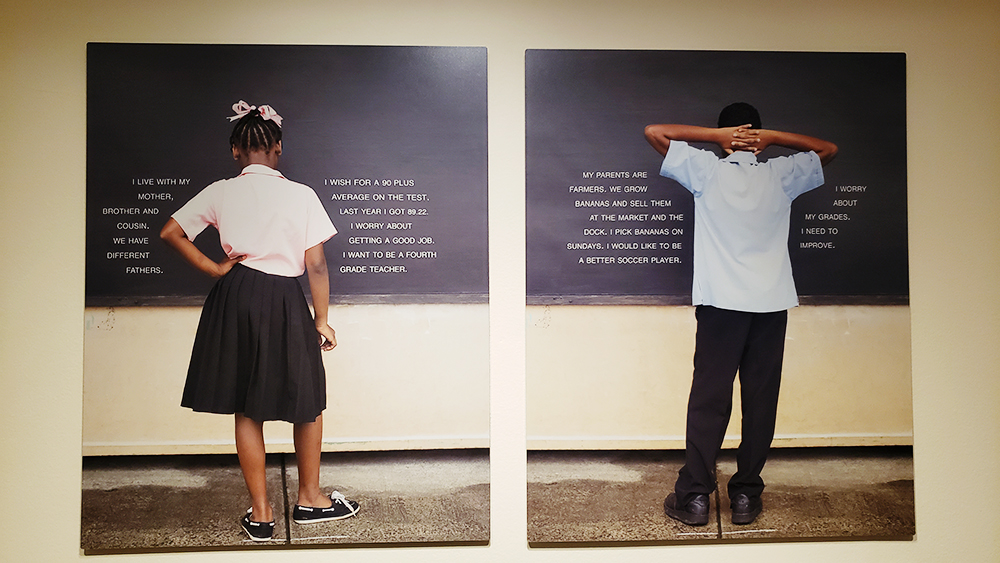 Renowned photographer and artist Patty Carroll has spent much of the past 30 years examining women’s complicated relationships with domesticity. In this, her first “pure installation,” she creates a mesmerizing world populated by ceramic birds in color-saturated settings of floral fabric, artificial flowers and decorative household trinkets – the kinds of past-generation collectibles found in thrift shops and antique stores.  A quilt-like array of approximately 250 panels wraps the gallery space, symbolizing the nesting instincts of women whose homes are a sanctuary of pride and obsession.

Carroll, who keeps a studio in Kansas City’s Crossroads Arts District, has drawn most of her acclaim as a photographer whose work has been exhibited nationally and internationally. Selections from her works are part of the permanent collections of New York’s Museum of Modern Art, the Smithsonian in Washington, D.C., and Kansas City’s Nelson-Atkins Museum of Art, among other places.

About the exhibit | Watch event video 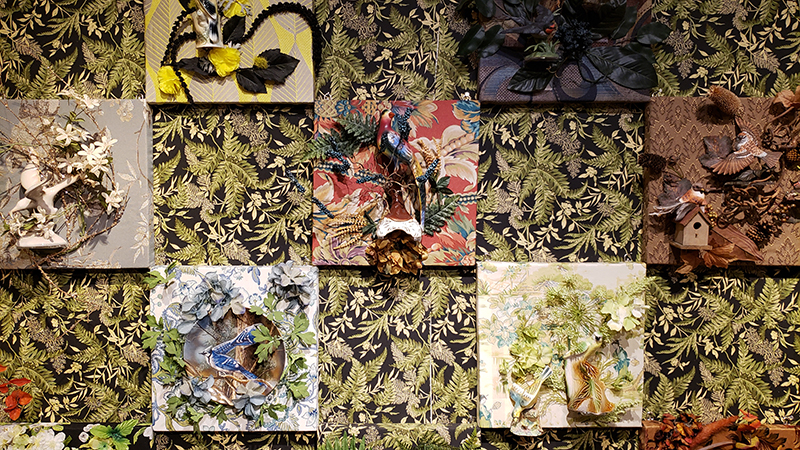 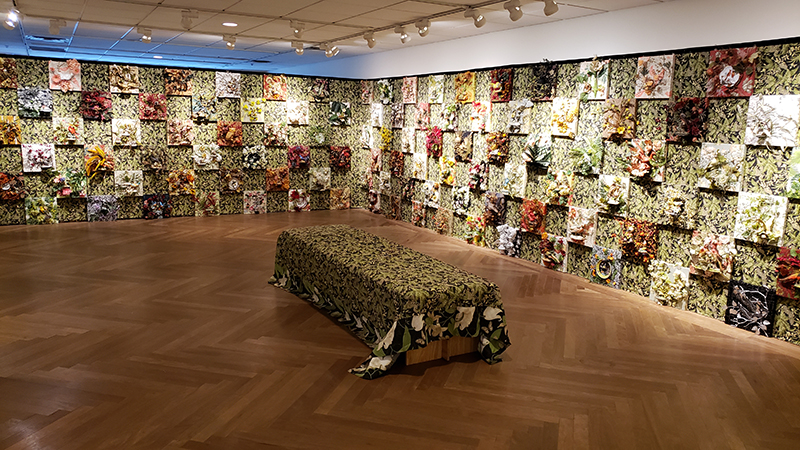 Community in Color: Murals of the Historic Northeast

It has been nearly 20 years since local artist Dianne Dickerson took brush and paint to a drab railroad underpass in Kansas City’s Historic Northeast, creating what would come to be called the Patriotic Mural.  She drew it like a coloring book, inviting others in the community to help fill in the ribbon of bright red, white and blue stars and flowing stripes. “I was so pleased at the response … the students and volunteers who worked on it and the reaction of the community,” Dickerson says, looking back.

Drive by the viaduct at Ninth and Hardesty streets today, and you can still admire their work – perhaps the starting point of a proliferation of colorful murals and other public art that has become a distinguishing feature of the richly diverse Northeast area. Some 40-45 paintings now adorn businesses, schools and abandoned buildings that once were eyesores. They pop out in local parks. Along city streets. In tucked-away alleys.

More than 30 of those images are spotlighted in an exhibit, Community in Color: Murals of the Historic Northeast, at the Kansas City Public Library’s newly renovated North-East Branch. The collection features high-definition, digitally displayed photographs of the murals and other al fresco artwork shot by Kansas City photographer David Remley. 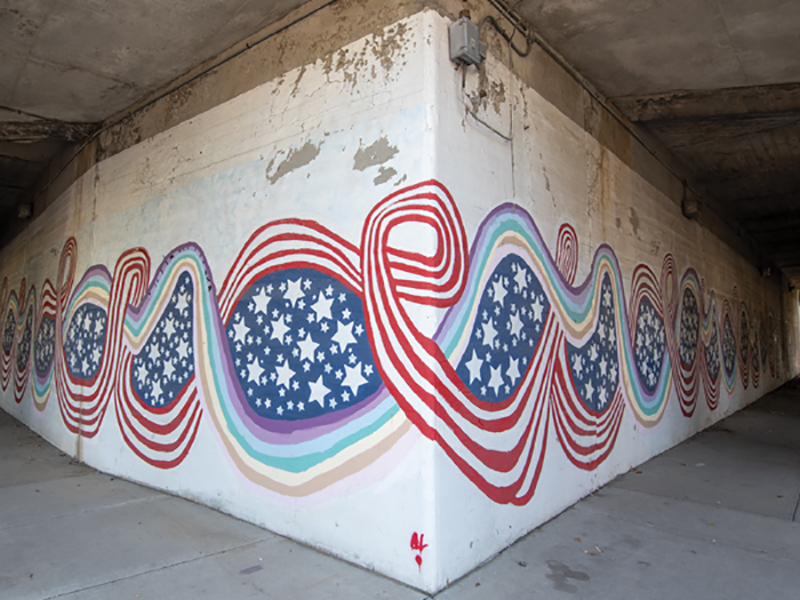 The Historic Northeast’s public art movement might have begun in 2001 with Dianne Dickerson’s Patriotic Mural on an underpass at Ninth and Hardesty streets. (Photo by David Remley) 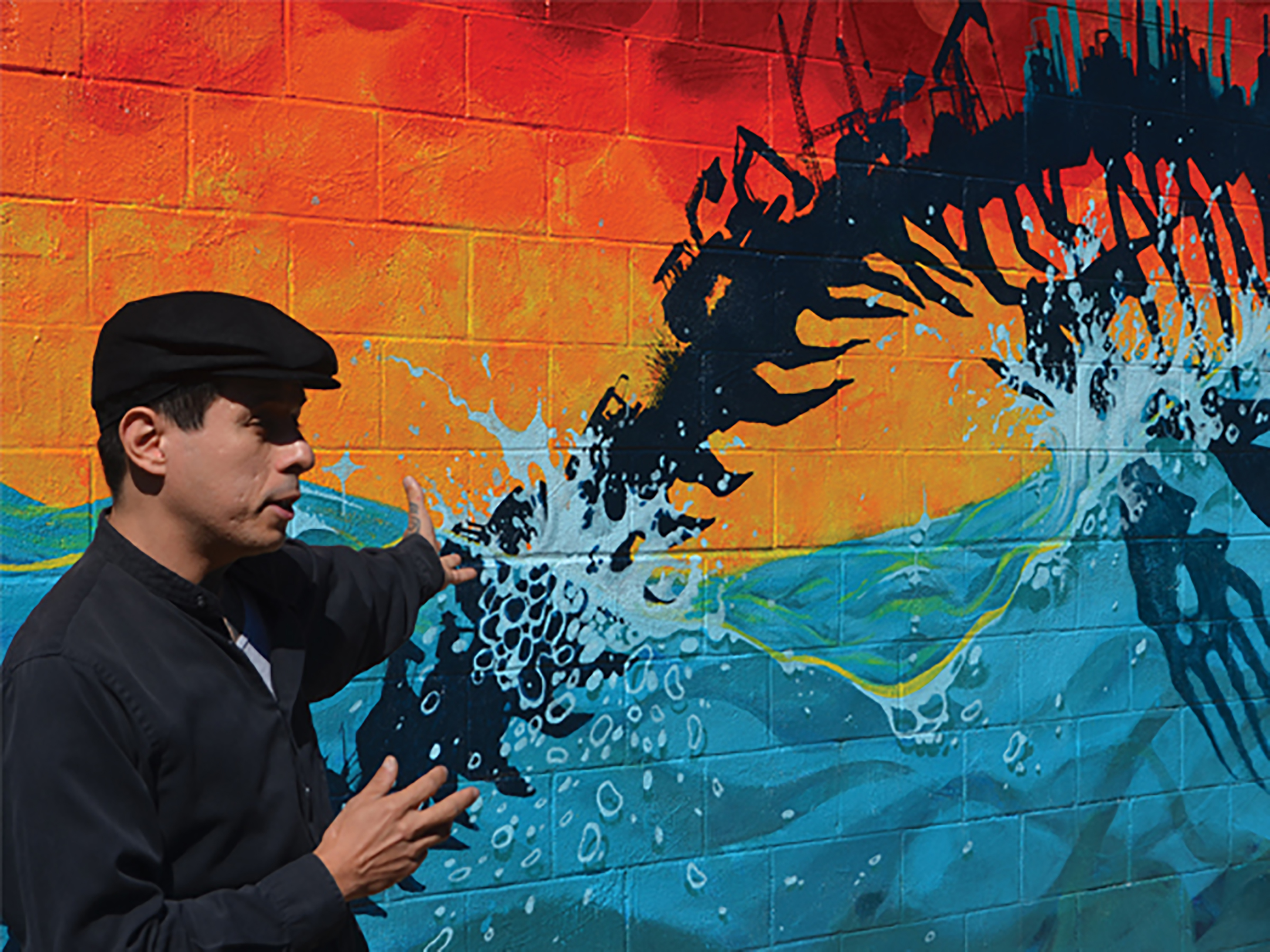 Nearest by Air to Everywhere’: A Tour of Kansas City’s Aviation History

Kansas City’s aviation history dates to the mid-19th century and a scene right out of Oz – the first ascension of a manned hot air balloon in the city, witnessed by thousands of people spilled onto rooftops and other high vantage points. It extends from biplanes to bombers, from dusty airfields to modern airports, from flying schools to the successful pursuit of a hometown airline, TWA.

As the latest chapter unfolds – and construction of a new $1.5 billion, single-terminal iteration of Kansas City International Airport moves toward completion in March 2023 – this new exhibit celebrates that rich heritage, charting the arc of air travel in the city and surrounding area. Kansas City had previously been a hub of transportation by water, by overland trail (the Santa Fe) and by rail. By air, too, it became (and billed itself) “Nearest by Air to Everywhere.”

The exhibit draws heavily from vintage photos and other images in the Library’s Missouri Valley Special Collections, and from the Kansas City Museum, the Jackson County and Overland Park historical societies and other cultural partners. 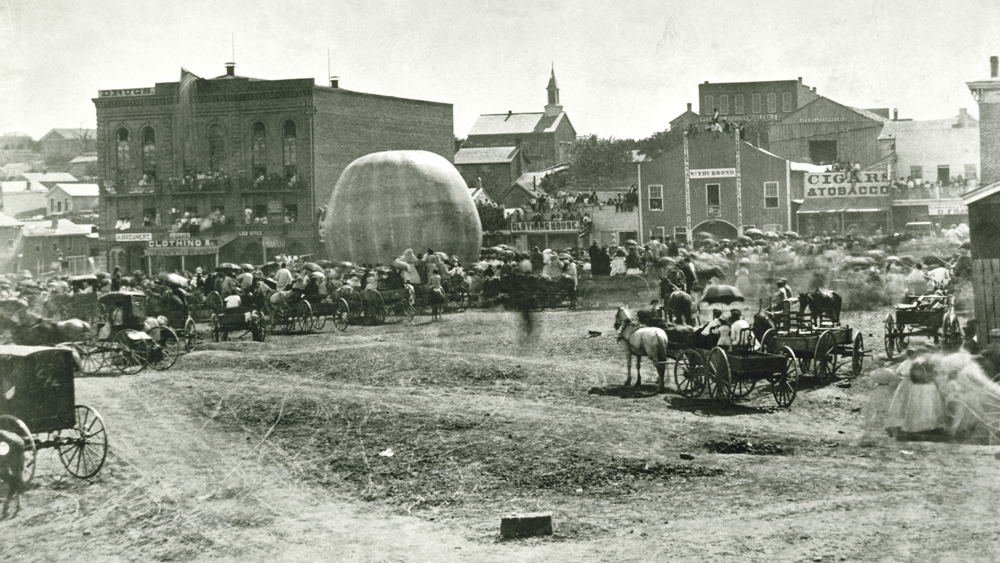 A crowd gathered near Fifth and Main streets to watch the inflation of J.H. Steiner’s hot air balloon before his Fourth of July flight in 1868. (Missouri Valley Special Collections) 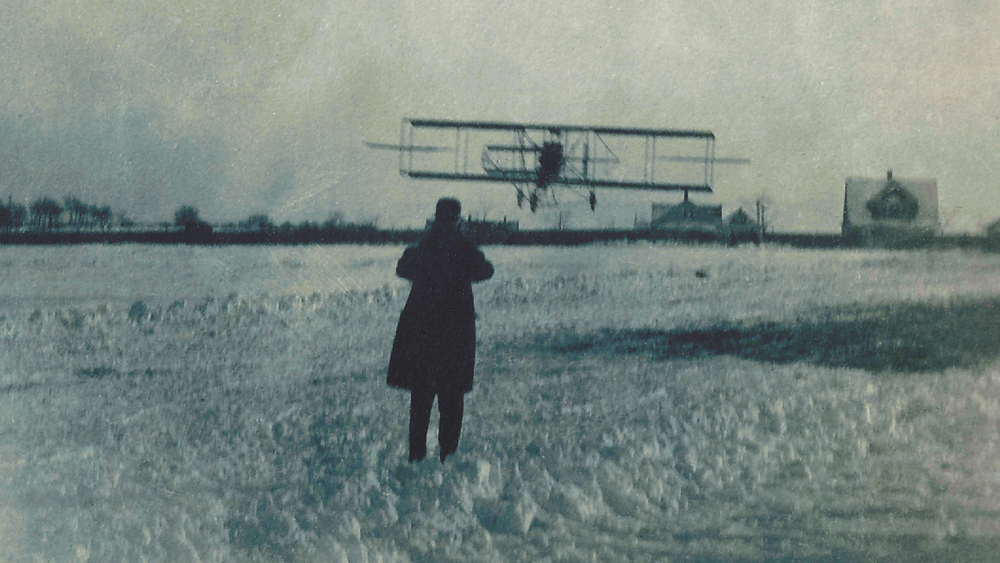 Lucile Bluford – namesake of the Library's L.H. Bluford Branch at 3050 Prospect – was a local civil rights leader and helped The Kansas City Call become a vital source of news and information for the Black community. Bluford’s impact on city and the nation is celebrated in an exhibit located in the lobby of the Bluford Branch; the display features a collection of photos and stories about her legacy. 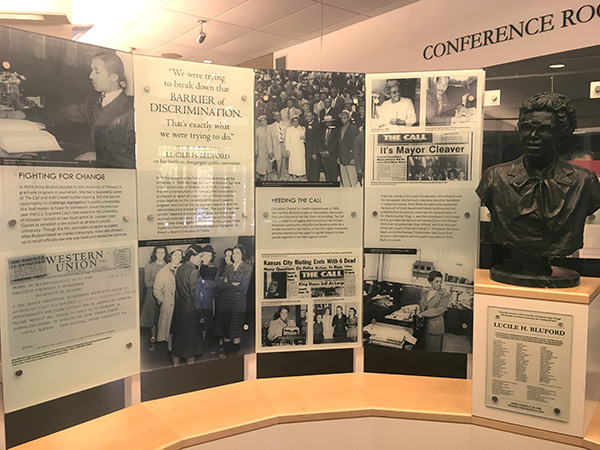 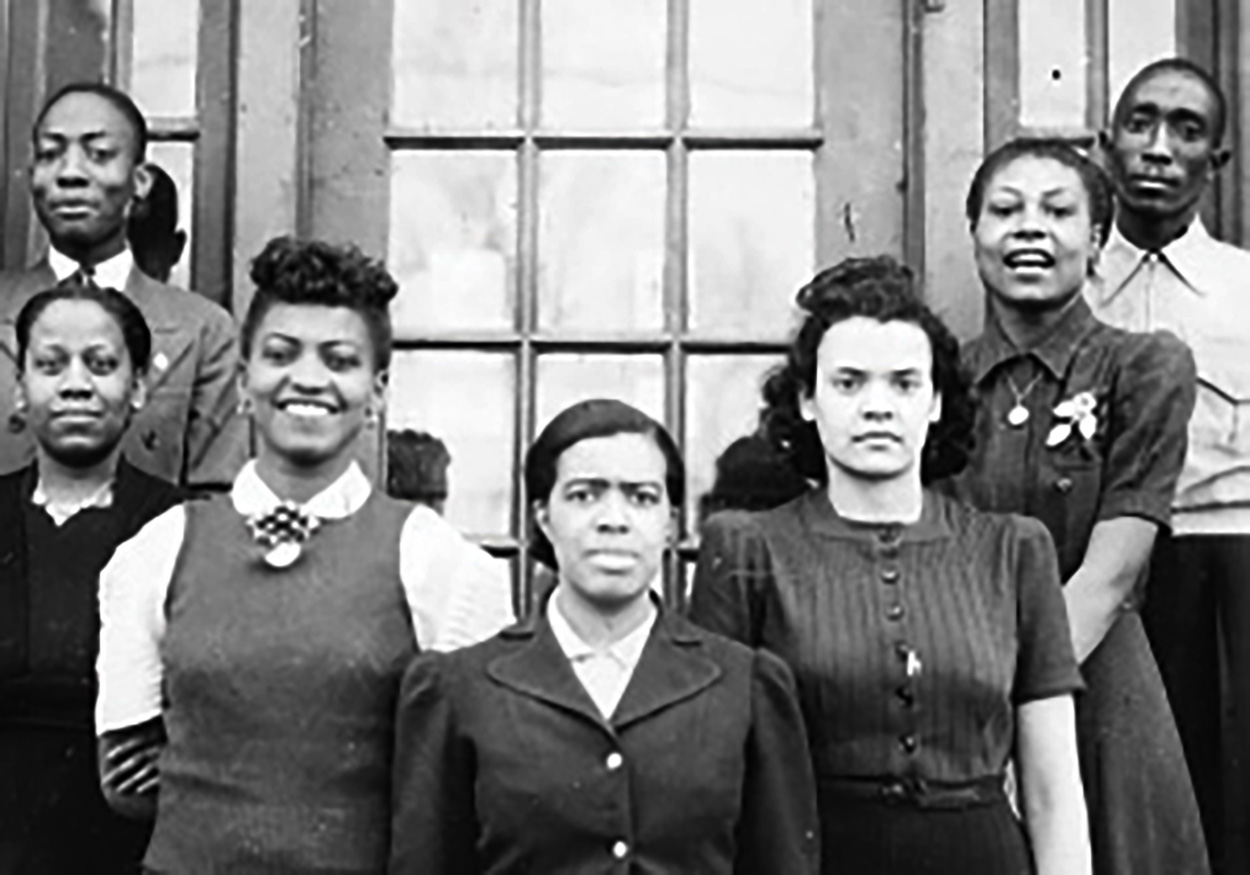