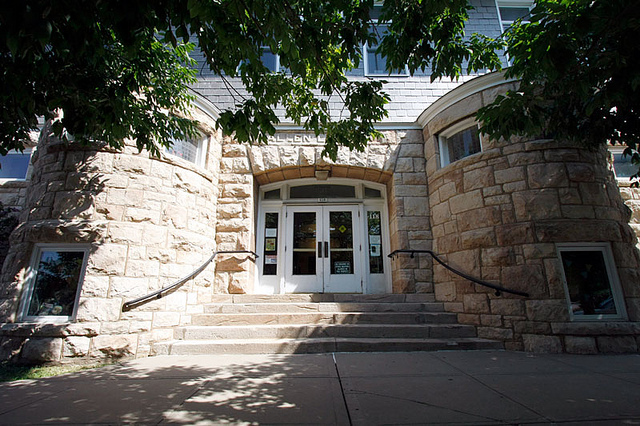 Located in the heart of Westport and only blocks from the Plaza, the historic Westport Branch was the first branch of the Kansas City Public Library, opening its doors to the public in 1898. Today it stands as a prominent landmark in the Midtown community and provides a cozy environment and friendly atmosphere for its many patrons.

The Westport Branch features free Wi-Fi, an easy-access parking lot adjacent to the library, and a spacious meeting room for events and gatherings. It also offers a unique collection of children’s books, music CDs, many fun displays, and a variety of feature films, TV shows, and documentaries on DVD.

Pop In / Pick Up Holds Service

Please note: Due to social distancing guidelines, some computers will be unavailable.

END_OF_DOCUMENT_TOKEN_TO_BE_REPLACED

Originally named the Allen Library, this beautiful stone and slate building first opened its doors to the Westport community on February 22, 1898, with Margurite Smith as its first librarian.

Now known as the Westport Library, the building still bears Arthur M. Allen’s name above the outside front doors because he played such a large role in the creation of the library. It was Allen who helped discover a surplus of $7,500 in taxes collected for the construction of a horse railroad line between Westport and Kansas City. Allen petitioned the neighborhood and determinedly fought the city in court in order to receive the excess money to build the library.

After finally winning the court battle, the land was purchased for $1,800, and the library built for $5,012. The Westport School Board, of which Allen was a member, allocated a $2,000 budget to stock the library with books. Shortly after, Westport was annexed by Kansas City. The Allen Library became part of the Kansas City Public Library and its first branch.

Over the years, the Westport Library has undergone many changes. In 1912, gas lamps were replaced with electric lights. During 1957-58, the home to the east of the library was demolished and a parking lot added. And most recently, in 1998, the library underwent an extensive renovation. When the work was completed in the spring of 1999, the Westport Library proudly reopened its doors and began another century of service to the community.