Will the KCTV5 tower ever light up the KC skyline again? We answer your KC Q

Kansas City native Todd Hembree has been curious about something missing from the skyline.

The KCTV tower at East 31st Street and Grand Avenue once was lit at night with more than 1,300 incandescent bulbs. A local group wants to use LED lights to create "the tallest public art installation in the world."

The KCTV broadcast tower at 31st Street and Grand Avenue once served as a 1,042-foot tall beacon at night, visible for miles around with more than 1,300 white lights tracing its four legs. But the tower has been unlit for more than a decade.

Hembree wonders why — and if — the lights will ever return. “The Western Auto sign is back,” he noted, referring to the iconic rooftop light returned to glory this year by the condo owners in its building. But the old broadcast tower on Union Hill remains dark except for aviation lights. “It’s something that I’ve seen all my life,” Hembree said. “You’d drive into the city and you’d see it all lit up. It’s very much a part of the KC night skyline that is missing.”

For this installment of “What’s Your KCQ?,” a partnership between The Star and the Kansas City Public Library, readers chose Hembree’s question for us to answer.

First, a little history. Construction of the tower began in 1955 by what was then KCMO-TV, according to The Star’s archives. What was billed as the world’s tallest self-supporting steel tower (no guy wires) started transmitting a signal in February 1956. The tower reportedly cost $420,000 at the time and comprises more than 600 tons of steel fastened together with 26,000 bolts. 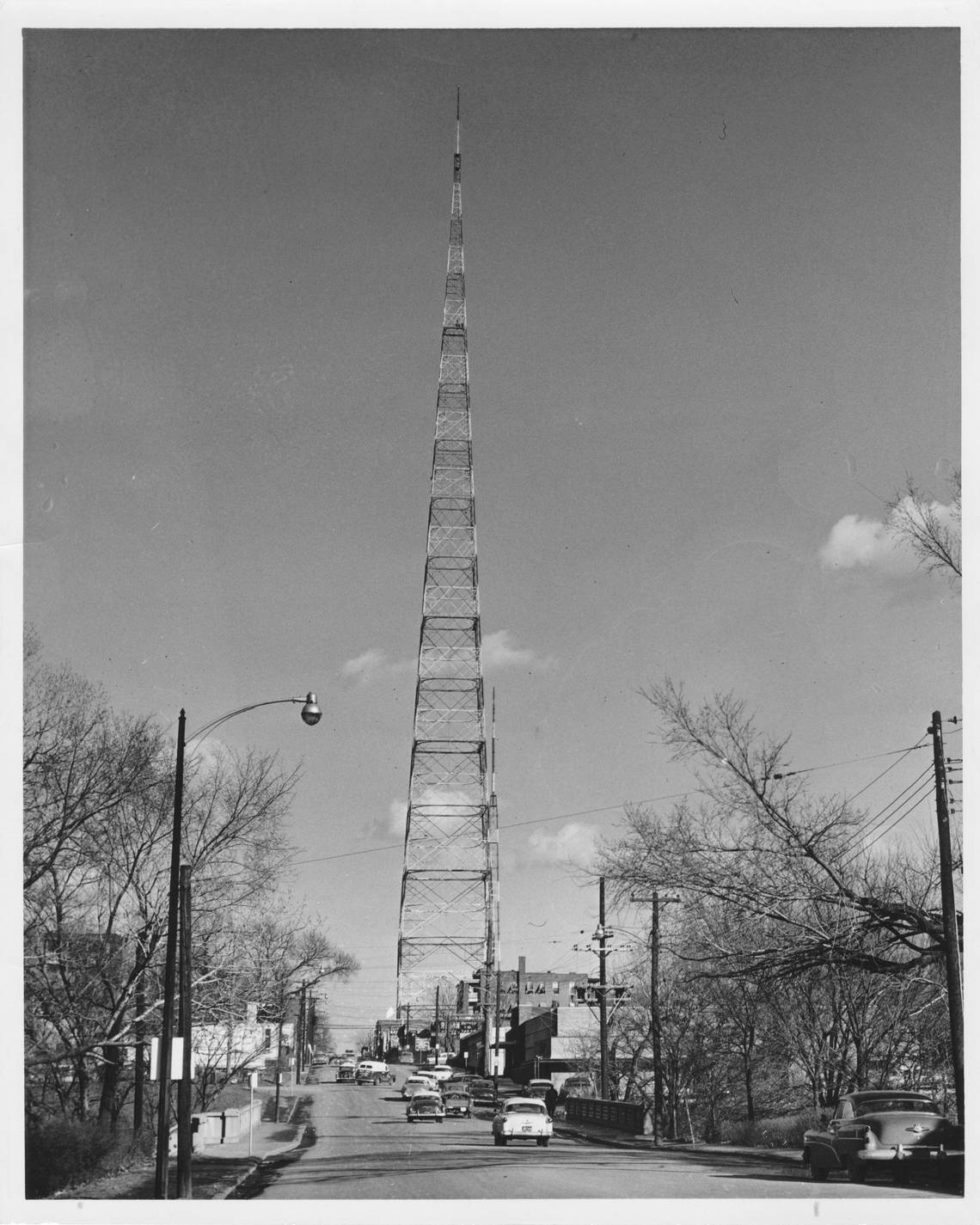 An image of the tower as it looked in the 1950s.
Credit: Missouri Valley Special Collections.

The tower was said to be modeled after the Eiffel Tower in Paris, but its joke nickname became “Eyeful” tower, an allusion to the eye logo for CBS, of which the TV station is an affiliate. As with any fixture of the landscape, there are stories.

In 1972, two Vietnam War protesters climbed the tower and stayed up there for more than 14 hours. The tower went dark during the 1973 energy crisis as a message for citizens to conserve. There was a serious suggestion in the 1980s to fashion the tower to look like a giant saxophone as a nod to the city’s jazz heritage. The lights were changed to a red, white and blue color scheme in the wake of the 9/11 terror attack. And, of course, there’s the ice. After an ice storm, heavy frozen chunks fall from tower, causing potential injury and property damage. At times, 31st Street has had to be blocked off until the ice threat diminished.

But even in the most pleasant weather, there is the issue of all those 25-watt incandescent bulbs and the electricity it takes to light them, plus some pulsating aviation lights. In 1997, The Star reported that about half of the bulbs needed to be replaced each year — by someone who would climb the tower. The bulbs either burned out or were broken by falling ice. There had been complaints that so many dark bulbs made the tower look “sad.” It went completely dark in the fall of 2005.

The TV station had long since moved to Fairway and become KCTV, but the tower remains its main signal transmitter and there is a camera on top. A group called The Tower KC wants to raise $300,000 to relight the tower and create “the tallest public art installation in the world,” but there have been no postings on its Power the Tower Facebook page for more than a year. KCTV has no plans to relight the tower.

“Logistically, it’s very difficult to keep that tower lit,” said KCTV General Manager Chuck Poduska. The tower would probably have to be rewired and fitted with new bulb sockets, at a cost that Poduska could not estimate. And there still would be continuing damage from falling ice. “It’s just not feasible anymore,” Poduska said.