Question: What happened to the really cool looking city hall at 5th and Main?

Really cool looking is definitely an accurate description of Kansas City’s second City Hall building. To gain a better sense of what’s so cool about it, I began by consulting architectural historian George Ehrlich’s Kansas City, Missouri: An Architectural History, 1826-1990. 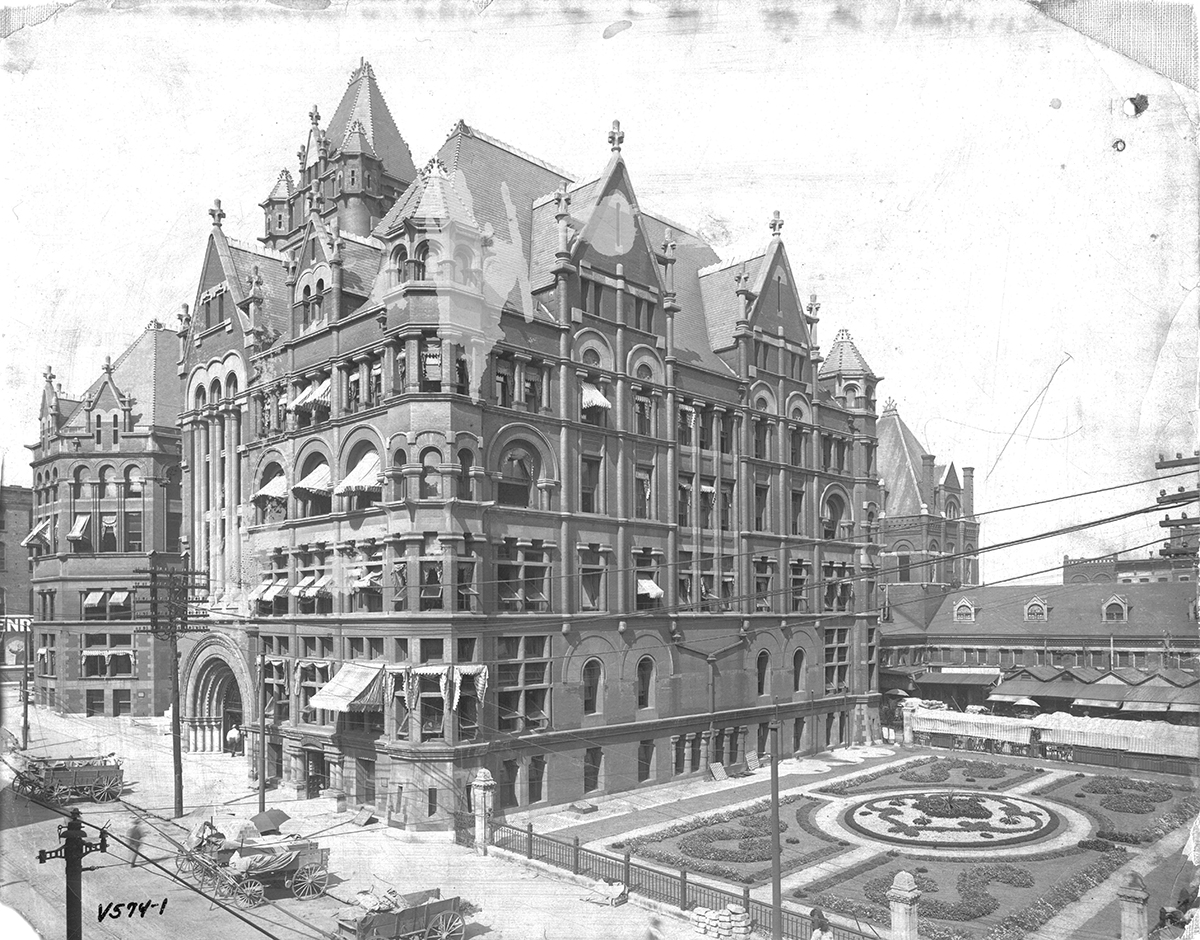 He writes that a building boom was going on in the 1880s as the city rapidly expanded south out of the River Market area, and that many of the city’s early architects were heavily influenced by the Romanesque Revival style, a distinctly “fussy” style according to the author. However, Ehrlich states that the presumably less-fussy neoclassical style gained favor following the 1893 World’s Fair and subsequent explosion of the City Beautiful Movement. The 5th and Main City Hall, built in 1891, is described by Ehrlich as a stylistic outlier – a throwback to a gaudier and fussier era right out of the gate. 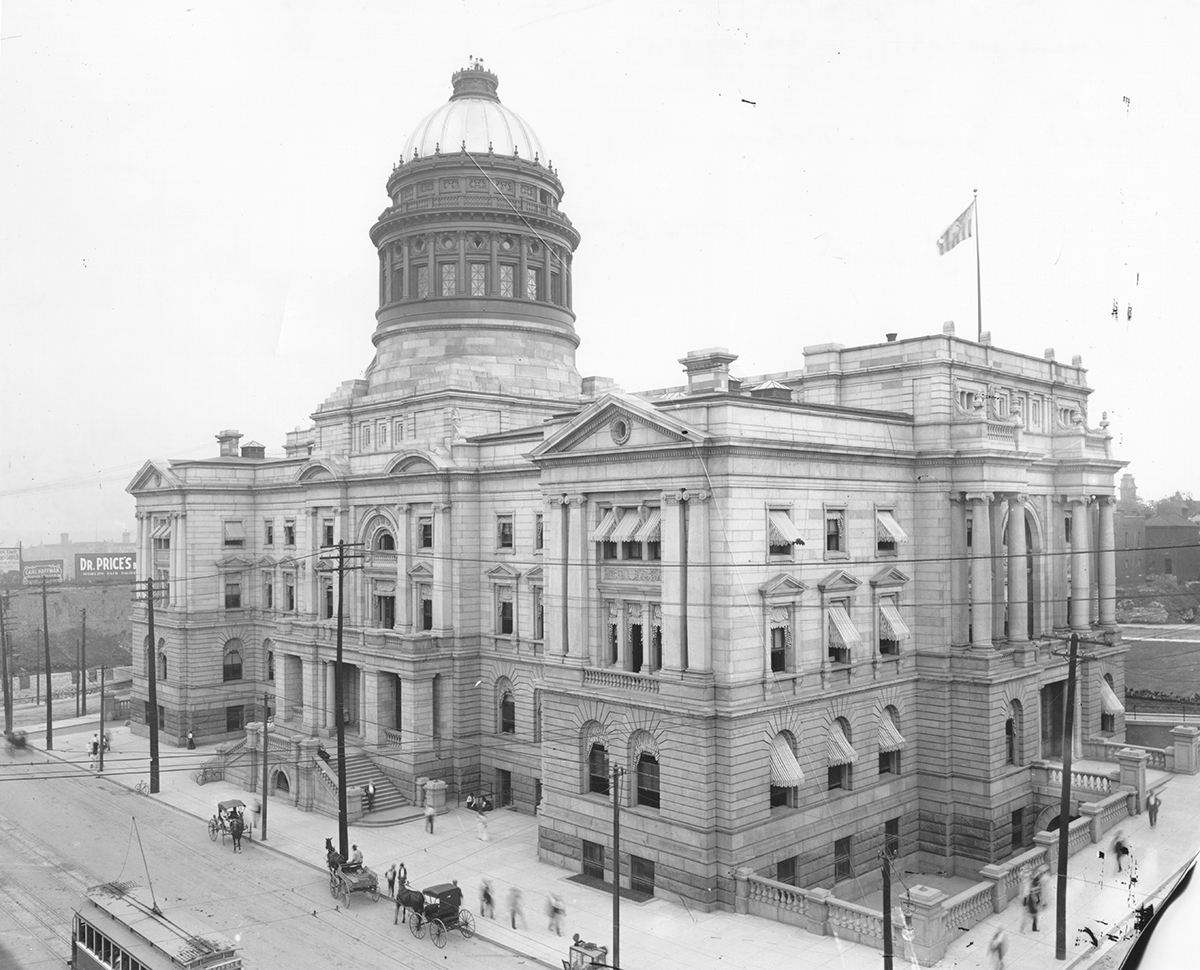 Completed shortly after the 5th and Main City Hall, the old Federal Building that once stood at 8th and Grand streets was more cutting edge for its time, following the neoclassical architectural trend made popular by the 1893 World’s Fair, 1900

Not only was the building a stylistic anomaly when it was completed, its physical location harkened more to the city’s river town past rather than to its southward facing future. Yet, the machinery of municipal government functioned at the 5th and Main location until, as this Building Profile indicates, Kansas City’s third City Hall was completed in 1937. 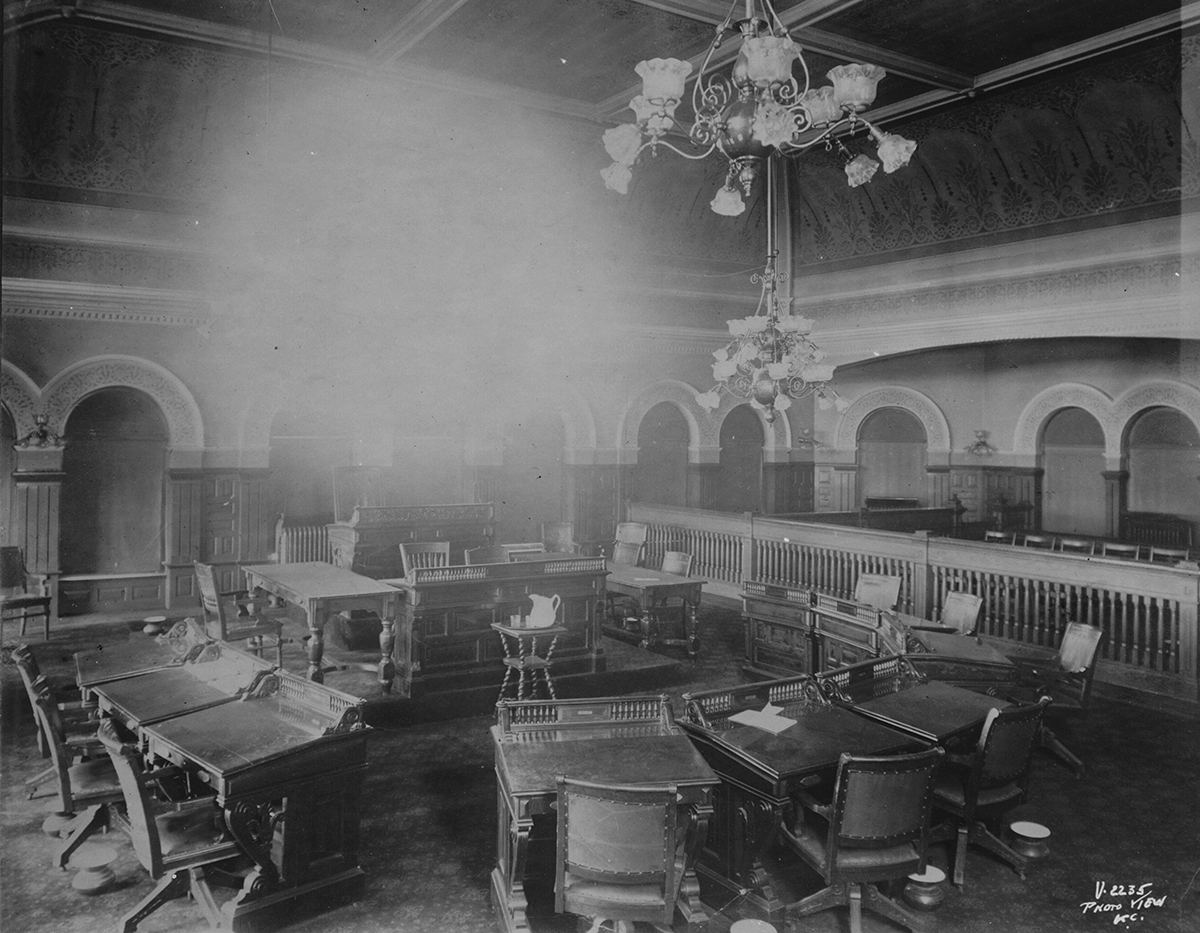 Interior view of the council chambers at the 5th and Main City Hall, n.d.

To understand this move, I turned to George Fuller Green’s A Condensed History of the Kansas City Area. Green, an architect by trade, was appointed City Historian by Mayor H. Roe Bartle in 1959, so his work is an excellent resource for learning about the city government’s physical structures. He writes that by the 1920s, city leaders believed they had outgrown the old building, and that as part of the city’s Ten-Year-Plan for public improvements, voters were asked to approve bonds to finance construction of a new City Hall.

With a little luck, and surely a little assistance from the Pendergast Machine, voters approved the measure. With that, the 5th and Main building’s days were numbered.

In 1938, the Kansas City Chamber of Commerce published Where These Rocky Bluffs Meet, Including the Story of the Kansas City Ten-Year Plan. The fate of the old City Hall is outlined in its pages. They write, “The next scheduled major project of the Ten-Year Plan is the new municipal market. Plans for the new structure…place it on the two blocks bounded by Third, Fifth, Main and Walnut streets. At this writing the old city hall is being razed in order to clear the site for the first market unit.” 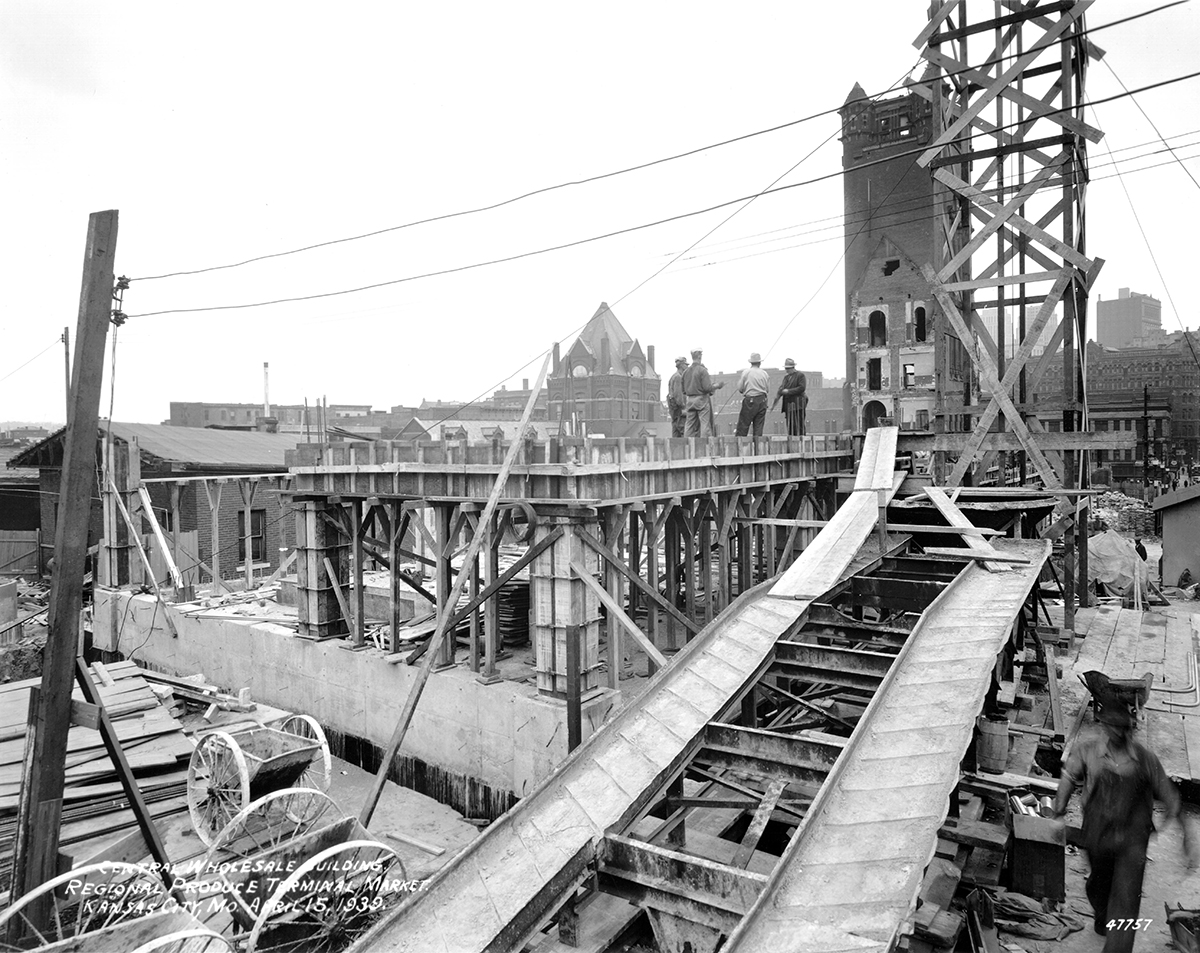 Construction of the new City Market with the tower from the old City Hall still standing in the background, 1939

So, there you have the long answer.

The short answer is that the city simply outgrew the building and it was cleared to make room for the also really cool City Market we know and love today. 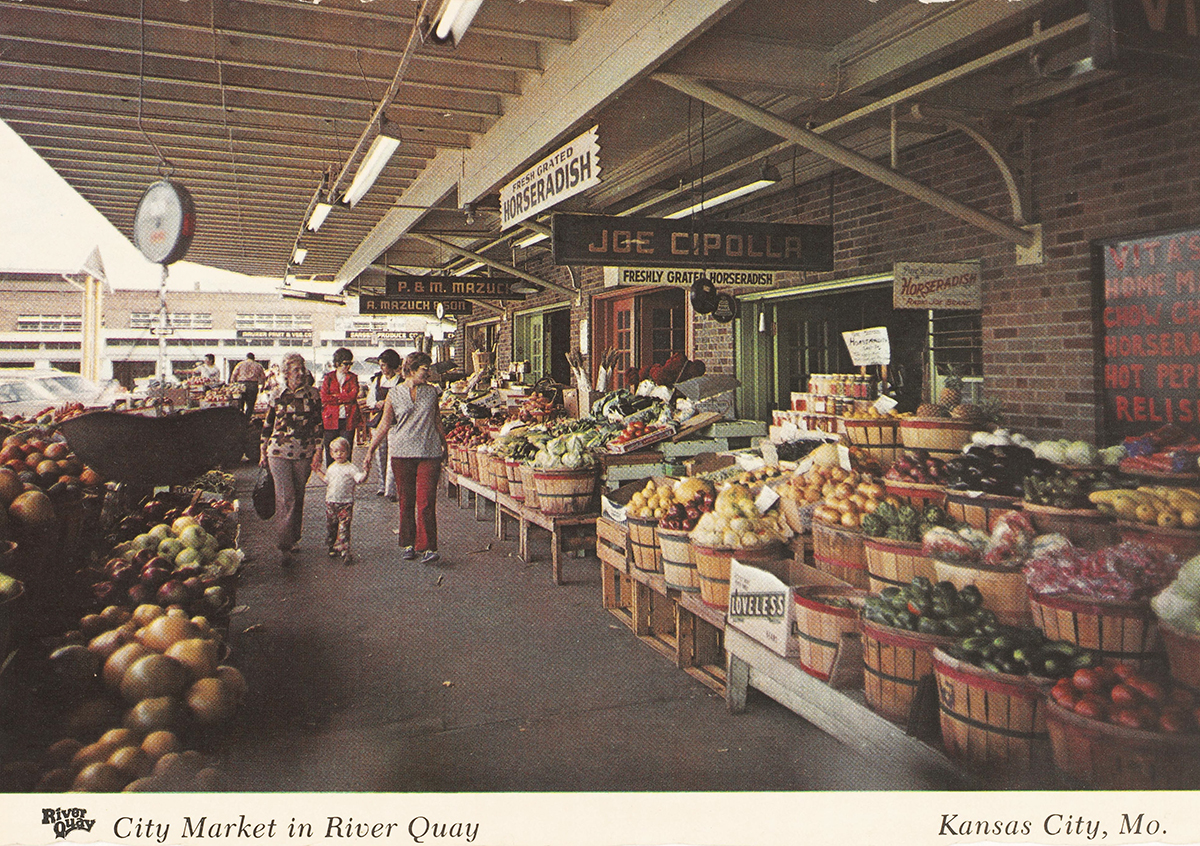 Do you have a burning Kansas City question? Enter it into the module below or Visit www.kansascity.com/kcq.