Carol Rothwell has driven past the sprawling mansion in Grandview on her way to church every Sunday for more than 10 years. A wrought-iron fence surrounds the 96-acre property. A winding gravel path leads past the red "no trespassing" signs on the gate, up a hill, past a pond and a thicket of trees, arriving at a mostly finished white stucco mansion with a red roof.

She sent a query to “What’s Your KCQ?": "What’s the story of the gigantic unfinished mansion at Highgrove and old Raytown Road, south of Longview Lake? Under construction for years!"

What’s Your KCQ is a series in which The Star and the Kansas City Public Library partner to answer reader questions about our region.

"I’ve been passing by it for 12 years or more," Rothwell later told The Star. "And some summers will go by and there’s almost no progress." She wants to know who owns the property, what’s being built there and why it's taking so long. 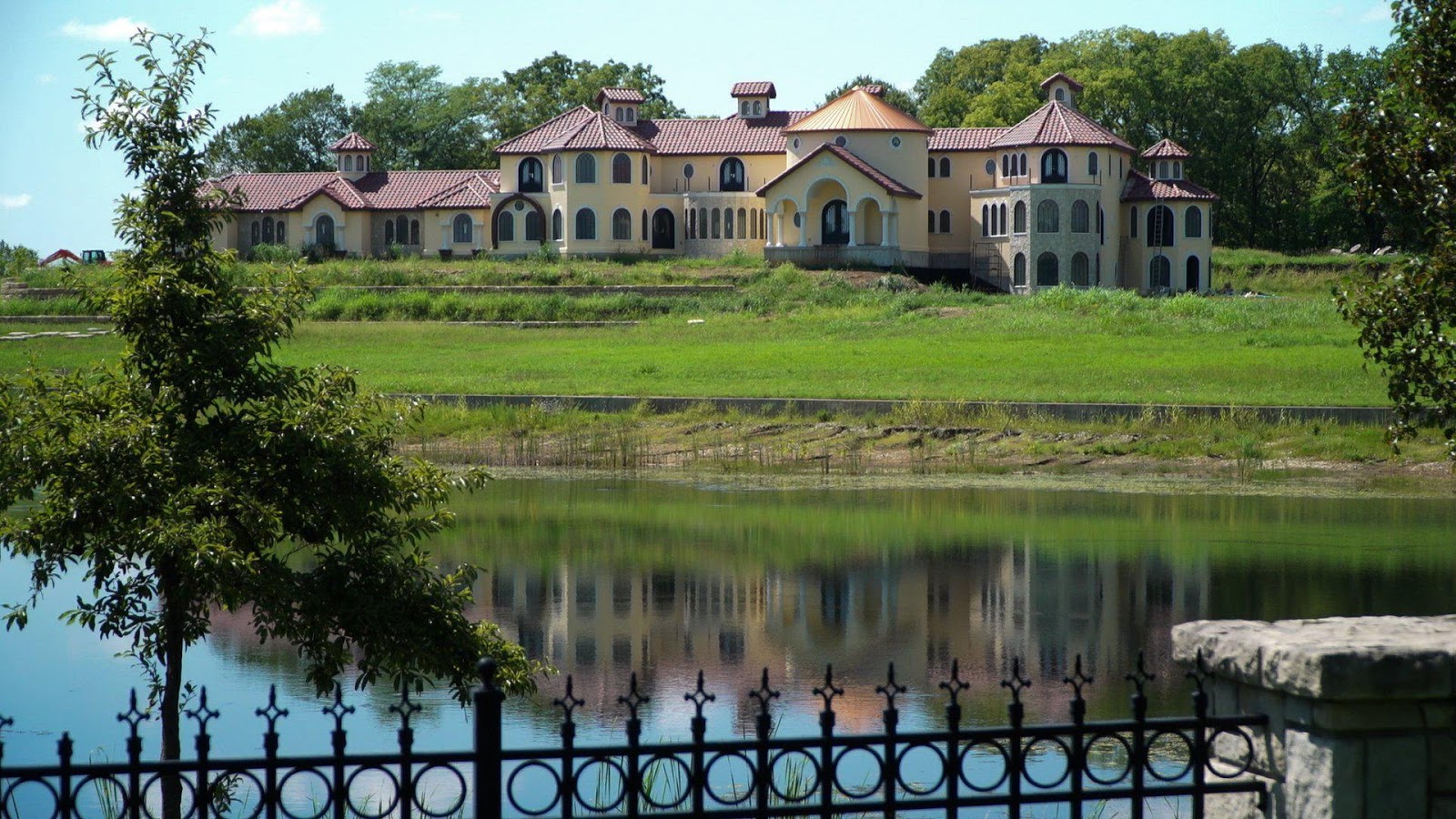 Mike Bauer purchased land off Raytown Road in Grandview for $400,000 in 2002 to build his dream home. It still isn’t finished. Shelly Yang | The Star

Mike Bauer, wealthy and reclusive, purchased the property for $400,000 in 2002 to build his dream home. Just days later, the new owner learned that generations of a local family were buried on the property, as well as Civil War soldiers and slaves, according to family lore.

We’re not saying it’s haunted, but almost 20 years later, the house remains unfinished. The Star could not reach Bauer, and his lawyers did not return repeated requests for comment.

But through a review of court documents and publicly available records, as well as interviews with neighbors, local officials and others, The Star learned that the story of the property not only winds back to the Civil War, but it touches on President Harry Truman and on to a halting construction process delayed by lawsuits and the owner’s slow-going, meticulous manner. 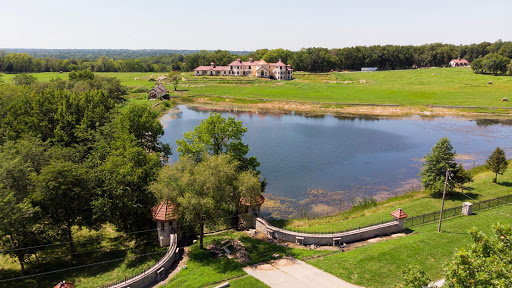 In addition to the mansion under construction, the 96-acre property includes a pond, a covered bridge and a Civil War burial ground. Shelly Yang | The Star

"He’s been building on that thing for 20 years," said Annette Turnbaugh, a Grandview alderman and local historian. "He’s kind of an oddball."

It’s not just reporters who have a hard time getting in touch with the owner.

According to court records, a stucco contractor sued Bauer in 2017 for about $30,000, and lawyers found it nearly impossible to actually find the man to serve him with a summons. Earl Ruhl, who was hired to serve Bauer, tried multiple times to approach the owner, but Bauer would quickly leave without acknowledging who he was. At one point, a man with a large rottweiler approached Ruhl and “ordered” him to leave the property.

Bauer has been waging a protracted legal battle ever since.

Jay Harris, a neighbor, said he once asked Bauer how he made his money, and Bauer told him, "Oh, I have people who do that for me." Harris described his neighbor as a stoic man, close-mouthed but not unkind.

"He’s a worker. Been there every day for 10 years. He’s a perfectionist," Harris said. "That’s his hobby. You think he’s done, but he’s not."

At one point, half the fence had been installed around the property when Bauer decided it wasn’t how he wanted it, Harris said. So Bauer had it torn down and redone. Then Bauer decided he didn’t like the rounded tops of the fence, so he had them all taken off and replaced with pointed tips.

He said that Bauer is the kind of man you don’t want to cross, and that he took one of their other neighbors to court over a dispute. Court records show that Bauer has been involved in dozens of lawsuits over the last 30 years.

In addition to the mansion under construction, the 96-acre property includes a pond, a covered bridge and a Civil War burial ground.

Construction was delayed by another situation that Turnbaugh described as a "brouhaha." Just days after buying the property, Bauer learned of an old family graveyard there dating back to the Civil War. But due to a legal technicality, he didn’t own that bit of land.

The graveyard holds the remains of members of the Strode family going back generations. Buried nearby are as many as 15 slaves and several Civil War "bushwhackers," Missouri’s guerrilla soldiers. Jim Beckner, a local history buff, said that Union soldiers killed the bushwhackers just down the road from the property, leaving them in the sun to rot. The Strodes at the time, deeply religious, wanted to give the departed a proper burial, but the Union soldiers told them they’d kill them if they did. Beckner said the Strodes returned at night, collected the bodies and buried them in a shallow mass grave near their own family plot.

The Strode family had lived on the property until the farm was lost in the Depression, said Kay Harbert, a descendant, but John Strode, her father, visited from time to time. Harbert and much of the remaining Strode family have left the area.

Strode, a former Grandview postmaster, died in August 2007. His family had ties to not only the Civil War but also to Harry Truman and his family"

"The house on the property is one that when Harry Truman was road commissioner he would come by and have dinner or lunch at the house, and I heard tales of these," Harbert said.

Harbert’s grandparents got to know Truman when he was living on his family farm in Grandview. The Strodes used to cook him fried chicken dinners when the future president would visit on summer nights during his work as road commissioner, his first government job. But they were especially close with John Vivian Truman, Harry’s brother.

"We were kind of like Vivian’s boys," John Strode told the Truman Library in 1980 as part of an oral history project. "My dad and my uncle, who was Dad’s younger brother, John R. Strode — they never did, you know, try to capitalize on it. They couldn’t give a damn less. You know, they are proud of the fact and all, but they never have tried to capitalize or commercialize on it, and my family was the same way. We were just friends and that’s it. That’s all it amounted to."

Over the years, the ties have remained between the two families, Harbert said, but not as they once were.

"Dad every two weeks would take Vivian to visit Harry at the library," she said. "The Trumans all came to my wedding and sent baby gifts, so there’s some ties there — but we don’t go back much anymore."

The family that once lived on the Grandview property was friends with President Harry Truman, going back to the days when he was a road commissioner. 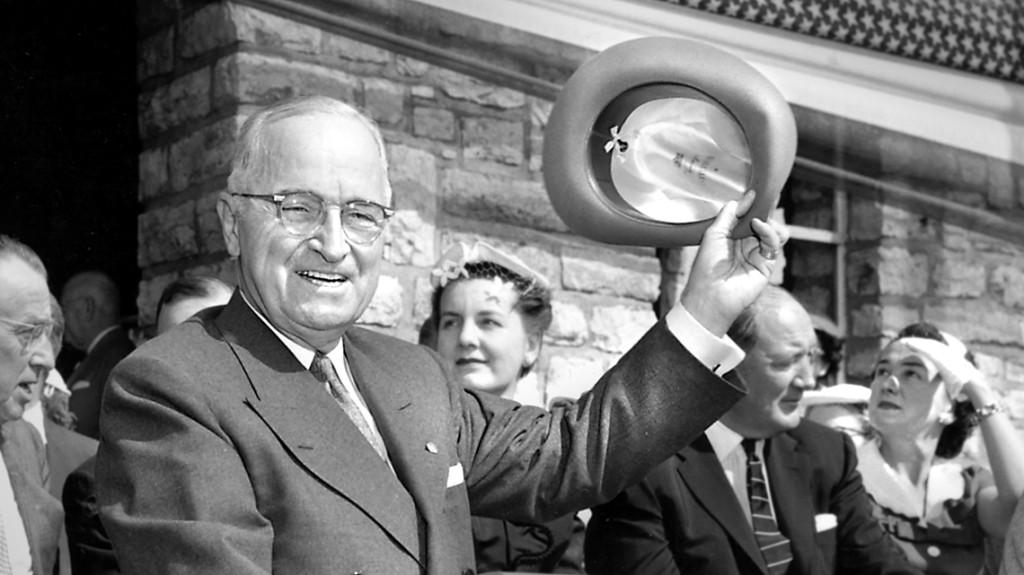 The family that once lived on the Grandview property was friends with President Harry Truman, going back to the days when he was a road commissioner. Courtesy of the Barth family

"Let’s just say he got upset"

When Bauer discovered the 35-by-60-foot graveyard, he was at a standstill. Although it lies inside his property, it had a separate deed, and thus didn’t belong to him. He had wanted to build his home where the cemetery was located, Beckner said, but he couldn’t move the cemetery without contacting the Strodes, and they were scattered around the country.

"When we started to remind him that anyone is a relative has complete rights to go out and put flowers there and clean it up a little bit, he went ballistic. Or let’s just say he got upset," Beckner said.

Bauer thought the graveyard lowered the value of his property and asked his title insurance to cover the difference. But he was denied, so he sued. Court records show he won $100,000 from the company. Finally, instead of relocating the graveyard, Bauer decided to build his house elsewhere on the property, just up the hill.

Now his 18,000-square-foot house is nearly finished. Bauer changed his business’s operating address to the mansion’s in March. Some scaffolding remains, a few windows are missing, and workers can be heard inside listening to music as they continue the job.

Outside, a great deal of landscaping and other work needs to be done. Pieces of scrap metal, an old car and a storage container sit on the driveway, and the road from the main gate on Raytown Road, past the covered bridge and up to the mansion, is not yet built.

The house seems to be Bauer’s hobby, Harris, the neighbor, said, and he seems to just enjoy going every day and working on it.
No one is sure if it will ever really be finished.