On August 17, 1927, a jubilant crowd of 25,000 gathered at the site of the present-day Charles B. Wheeler Downtown Airport to listen to speeches by famed aviator Charles Lindbergh and city officials during the dedication of Municipal Airport. Several Kansas City leaders, including a previously skeptical City Manager Henry F. McElroy, flew in from old Richards Field in Raytown and landed on the soggy turf known as "Peninsula field," just north of downtown Kansas City. Then, Lindbergh landed his plane, the Spirit of St. Louis, and ushered in a new era of aviation in Kansas City.

The new airport was due in large part to the efforts of Lou Holland, who had been president of the Kansas City Chamber of Commerce since 1925. Upon assuming that post, Holland became aware of the U.S. Army's plans to remove its aviation operations from the because of the substandard conditions and limited space at Richards Field. He reasoned that a new airport could keep the Army here. More radically, he foresaw an era in which airplanes would partially displace trucks and trains in the transport of people and goods. It was a bold vision in a time when airplanes were seen as the tools of daredevil barnstormers and risky military operations.

City Manager McElroy first dismissed Holland's requests for an airport, believing that flying was a fad that would disappear as crashes and deaths mounted. Two developments lessened his opposition, however. First, the Army Air Corps Reserve Officers' Association recommended a site for the new airport on the peninsula connected to Kansas City by the second Hannibal Bridge. Second, it came to the attention of political boss Tom Pendergast that the runways and a terminal at a new airport would require extraordinary amounts of concrete -- a demand he was more than willing to supply with the services of his Ready Mixed Concrete Company. 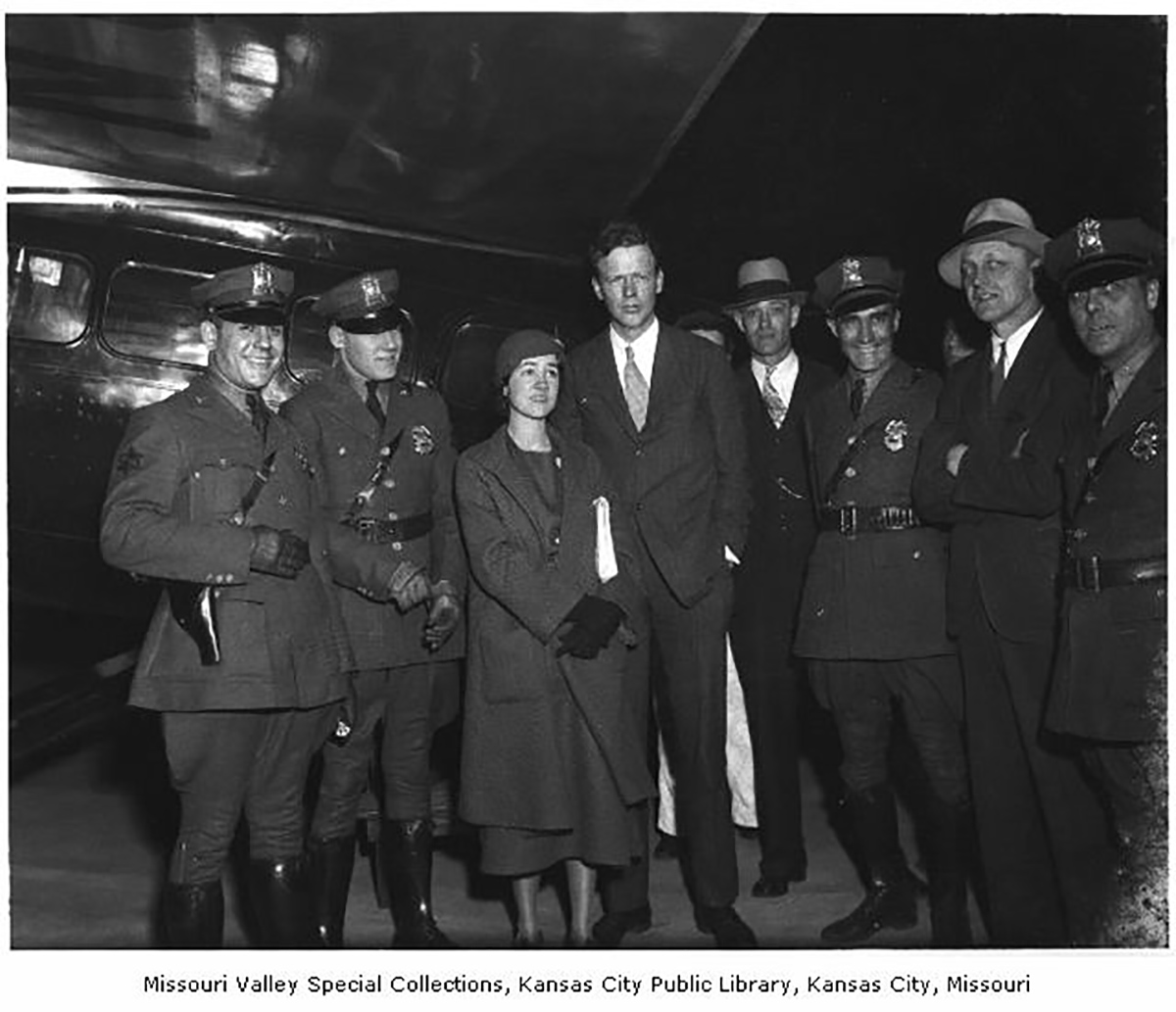 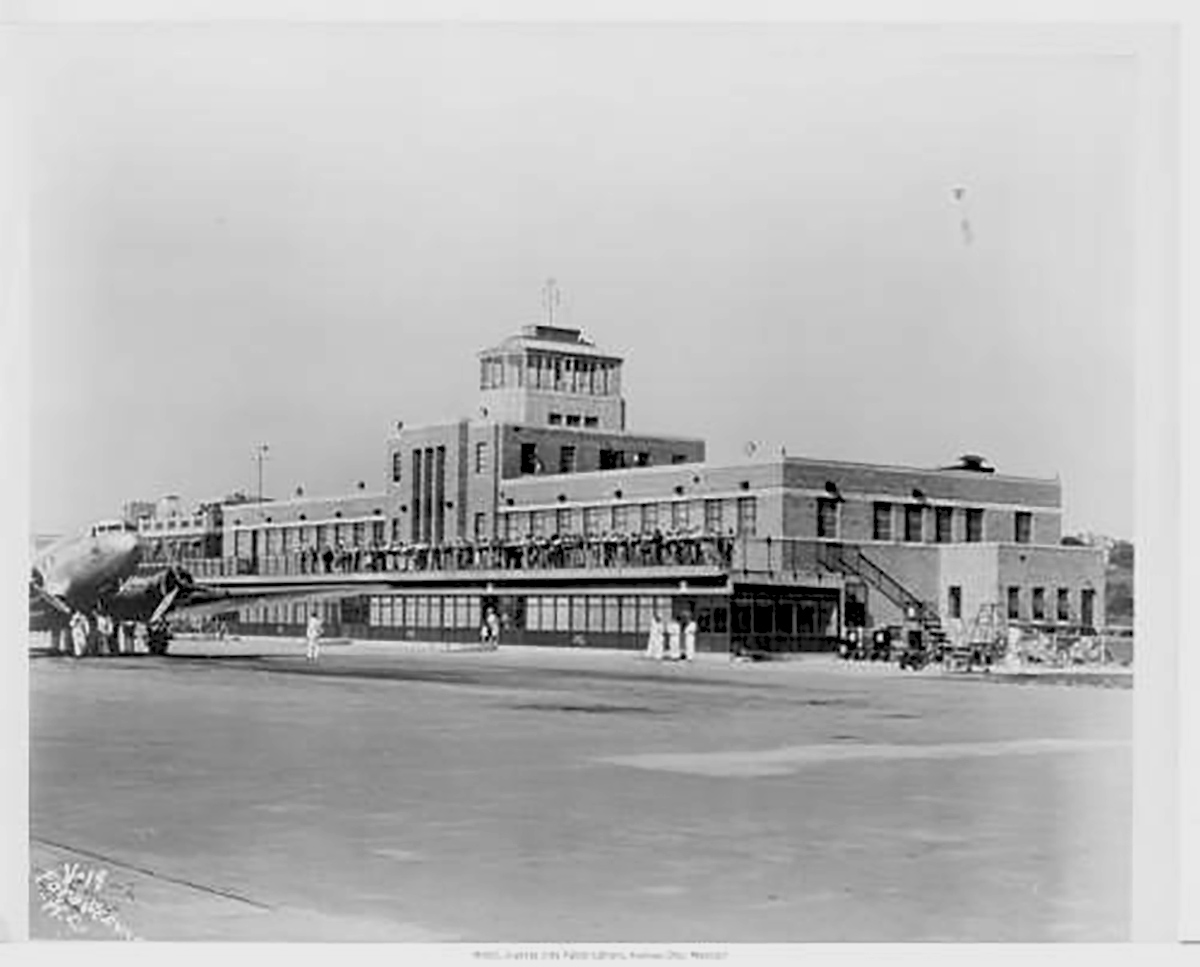 Full front and side view of Municipal Airport's second terminal building with a TWA plane to the left, looking northeast. (ca. 1940s)

The 1951 flood destroyed many Fairfax Airport facilities on the west side of the Missouri River, and compromised operations at the downtown Municipal Airport. With the area’s two main airports shut down, Kansas City began planning a new facility 20 miles to the north.

Opened in 1956, Mid-Continent Airport served as a hub for Braniff Airlines and boasted the main overhaul base for Trans World Airlines (TWA). But the runways and terminals remained undersized for Kansas City’s main airport. Most passenger traffic to Kansas City continued to land at Municipal Airport, where large, fast jets still had difficulty landing on the smaller runways and taking off without hitting the skyscrapers.

In hopes of increasing flight capacity in and out of the city, TWA encouraged the expansion of Mid-Continent Airport. Proponents thought Kansas City had much to gain from a new airport, especially considering the city still had important ties to TWA. The airline originated here in the 1930s, employed more workers than any other business in town, and was among the most prestigious airlines in the world.

On November 11, 1972, the Kansas City International Airport officially opened for commercial service at the same Mid-Continent site. Built at a cost of $250 million, the ambitious design drawn up by the architectural firm of Kivett and Myers reflected TWA’s grandiose ambitions. In land area, the airport was the third largest in the United States. It featured an innovative “Drive to Your Gate” design that allowed passengers to park near the circular terminals and walk roughly 75 feet to their gates. Only flat farmland surrounded the airport, eliminating the risk of flooding on the high plateau and making it a practical location for large new jets such as the Boeing 747. 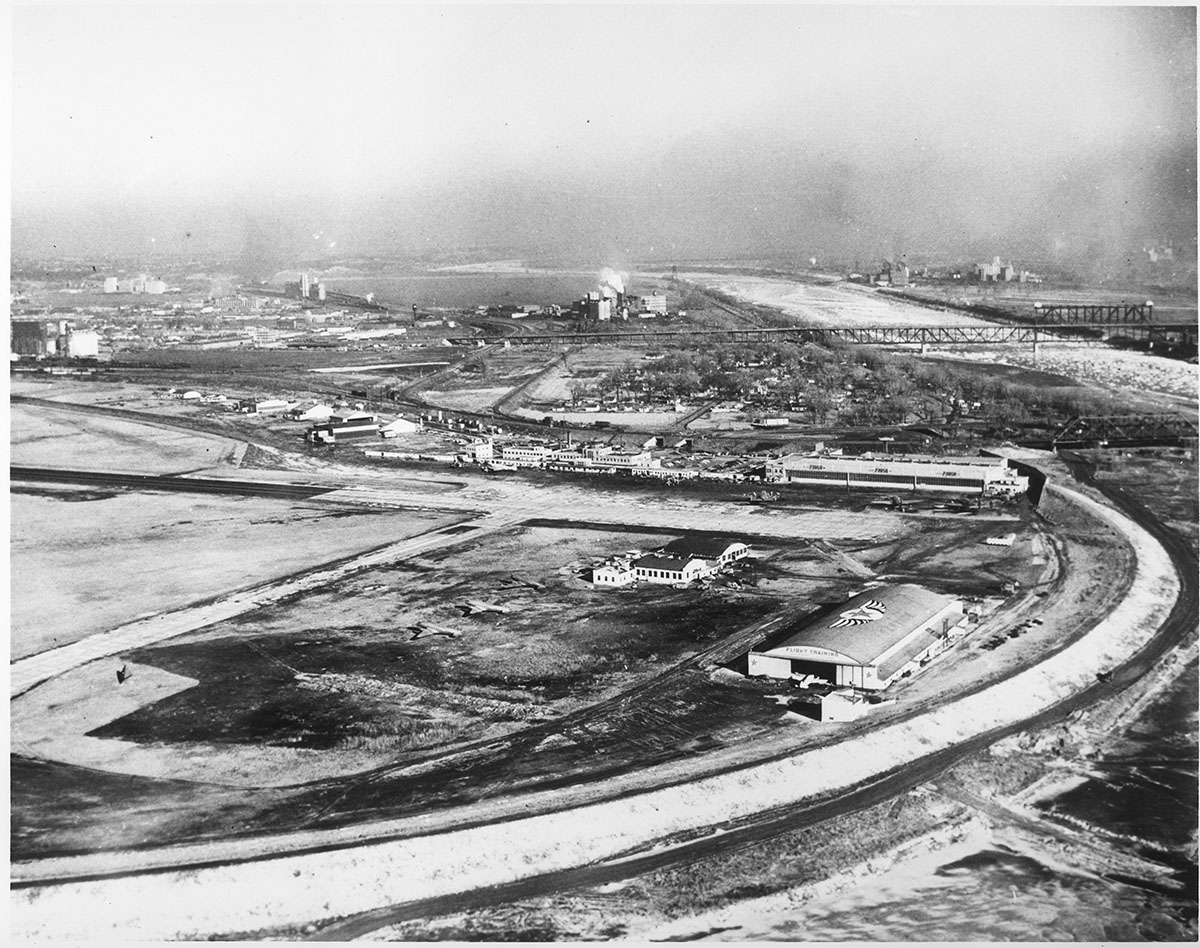 Aerial view looking east, showing the Municipal Airport in Kansas City, Missouri. The Missouri River can be seen with what appears to be ice floating in it. The ASB Bridge is also visible, along with a portion of the second Hannibal Bridge. Also in view: portions of North Kansas City and planes, TWA buildings, the flight training building, and other buildings at the airport. 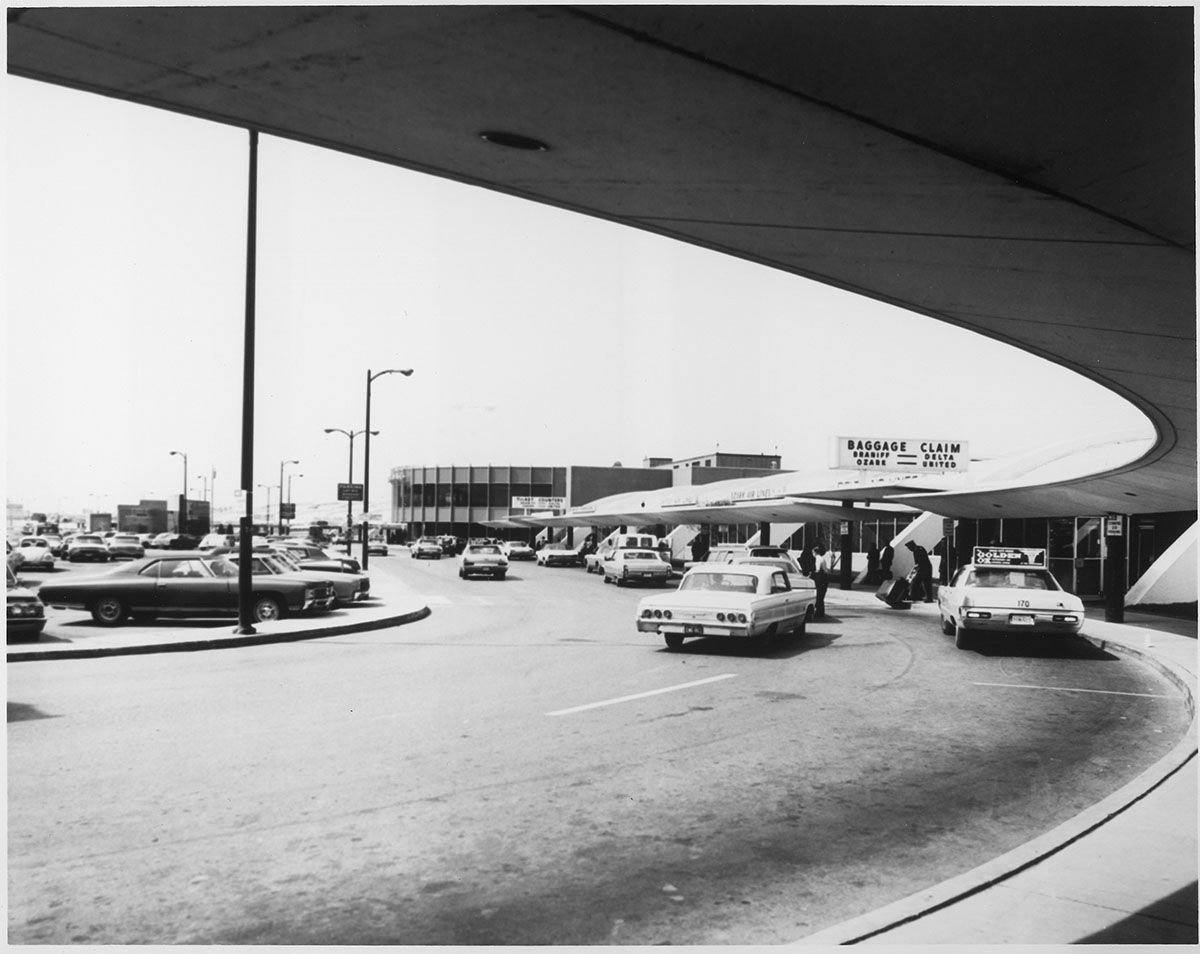 Exterior view of the front drive-by and entrance area of the Municipal Airport, located just north across the Missouri River from downtown. The airport later was called the Kansas City Downtown Airport and the Charles B. Wheeler Downtown Airport. 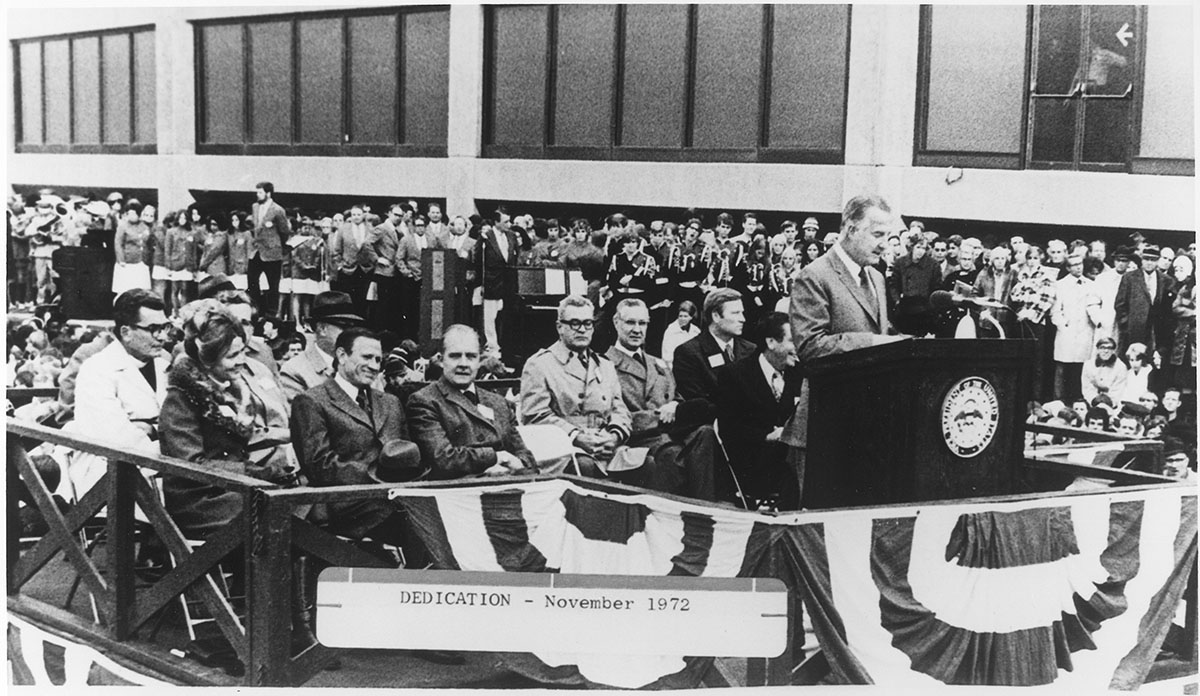 Exterior view of podium and crowd at the dedication of KCI Airport in November 1972. U.S. Vice President Spiro Agnew is standing and speaking at the podium. Others seated nearby: Missouri Gov. Warren Hearnes (behind Agnew), former Mayor Ilus Davis (at right behind Hearnes), Mayor Charles Wheeler (seated third from left on the first row), and probably various city council members. The airport  originally was named Mid-Continent International Airport. 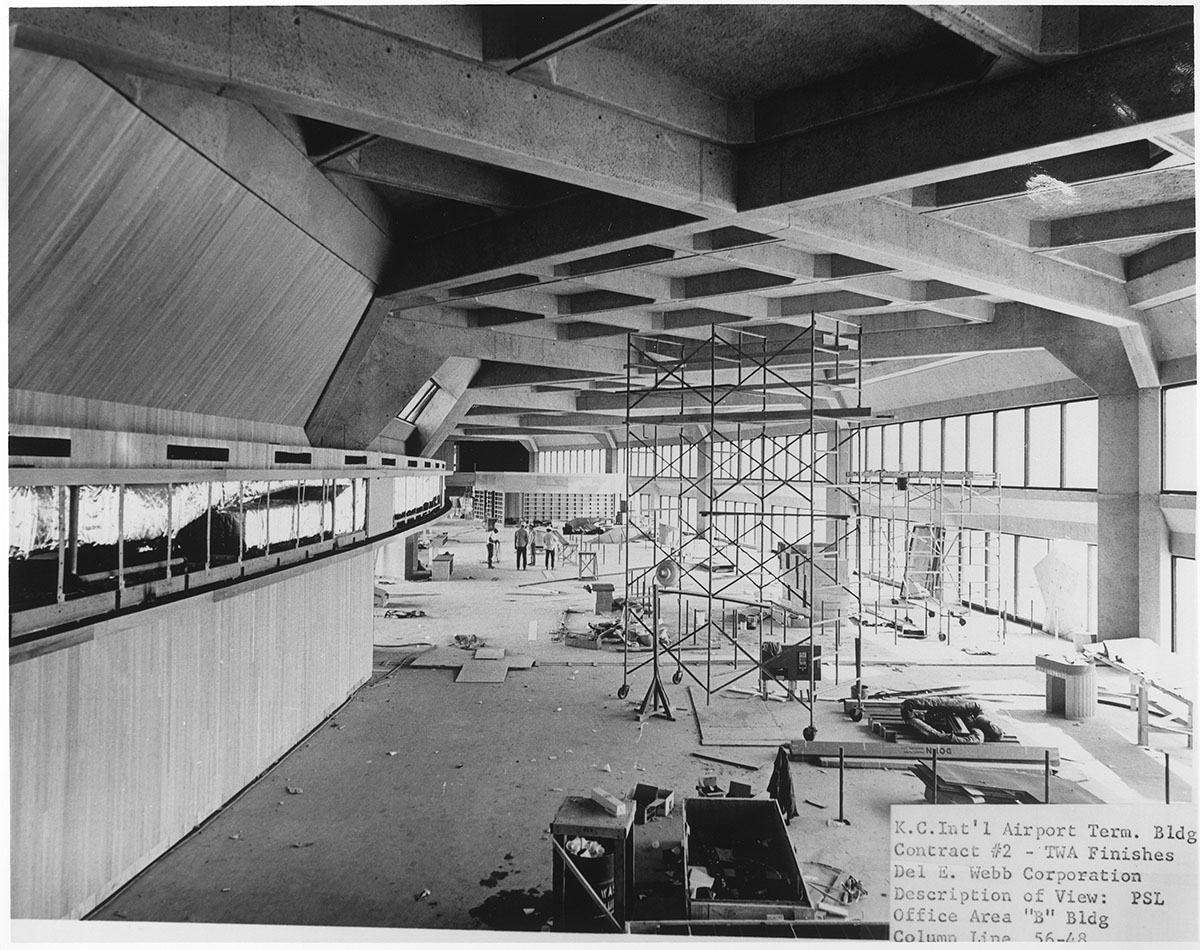 Interior view showing construction of what is believed to be Terminal B at Kansas City International Airport. 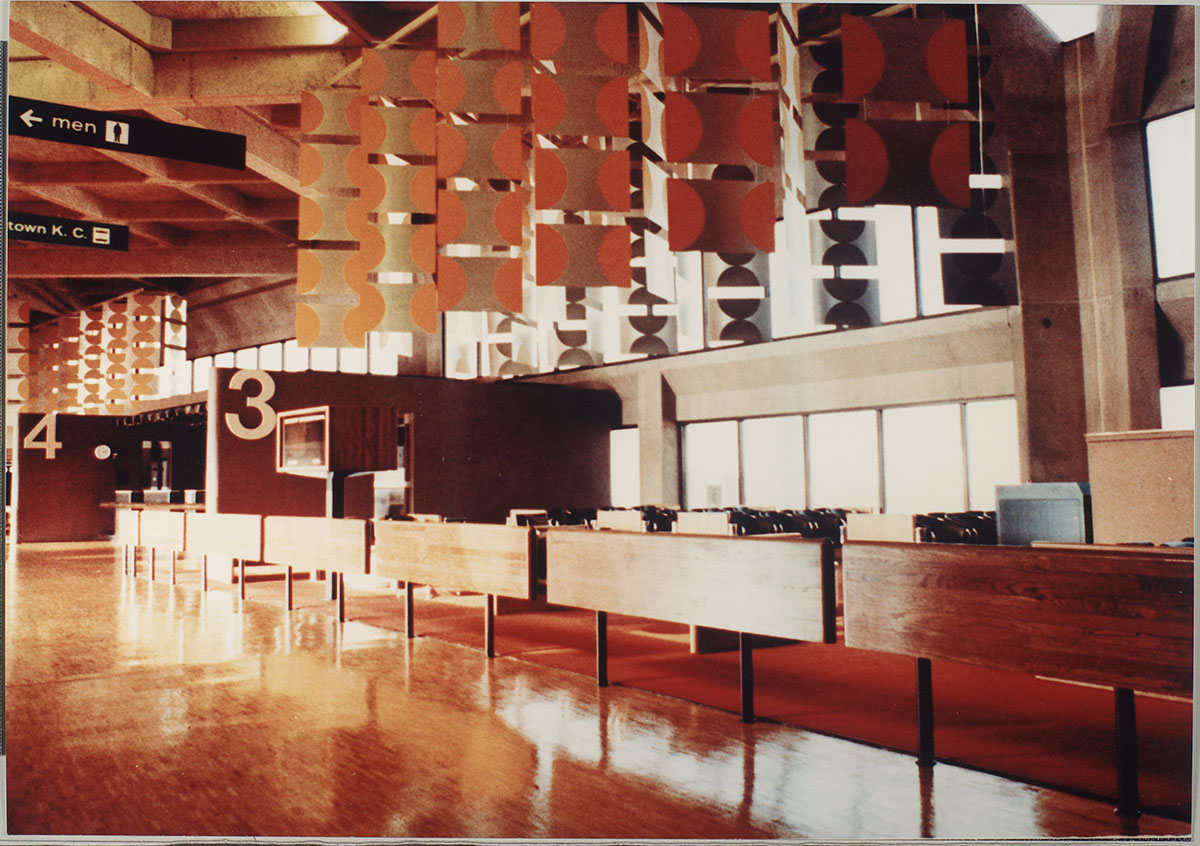 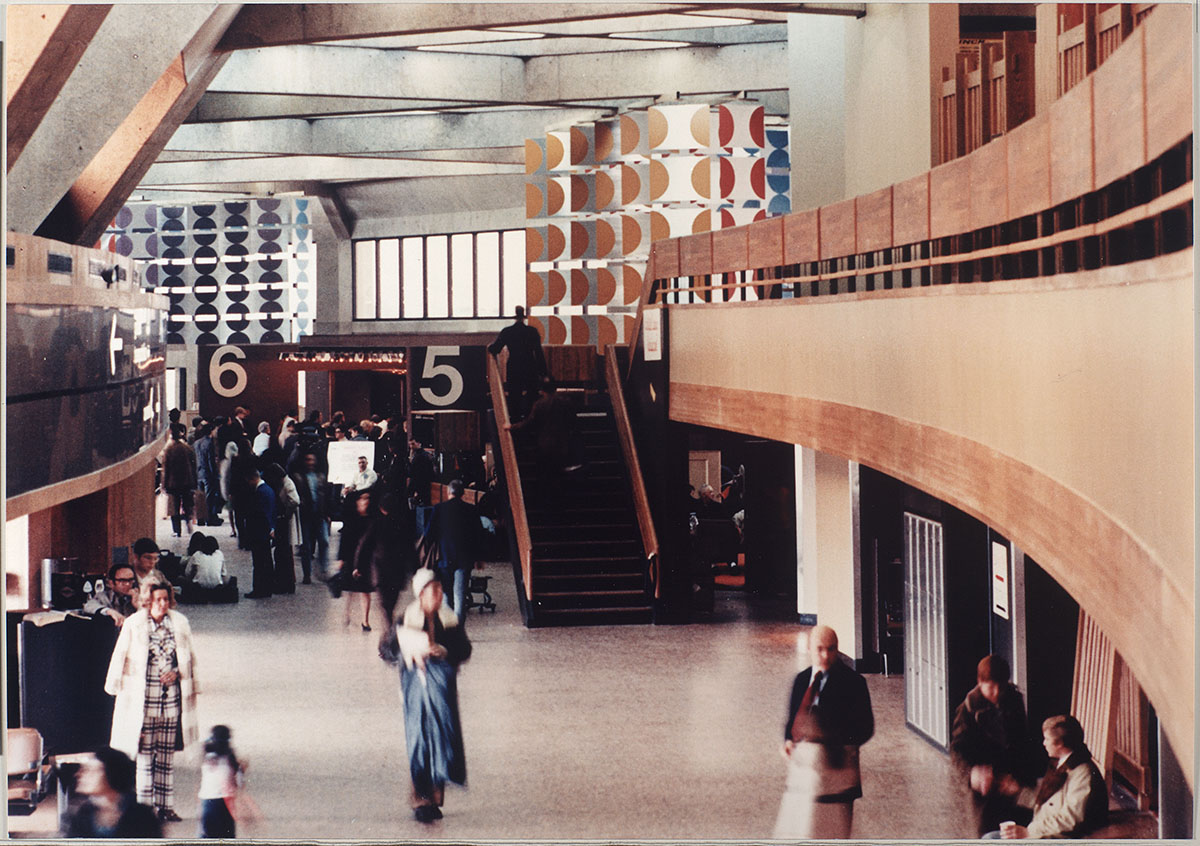 Interior view of passengers in an unidentified terminal at Kansas City International Airport. The photo is believed to have been taken shortly after the airport opened in 1972. 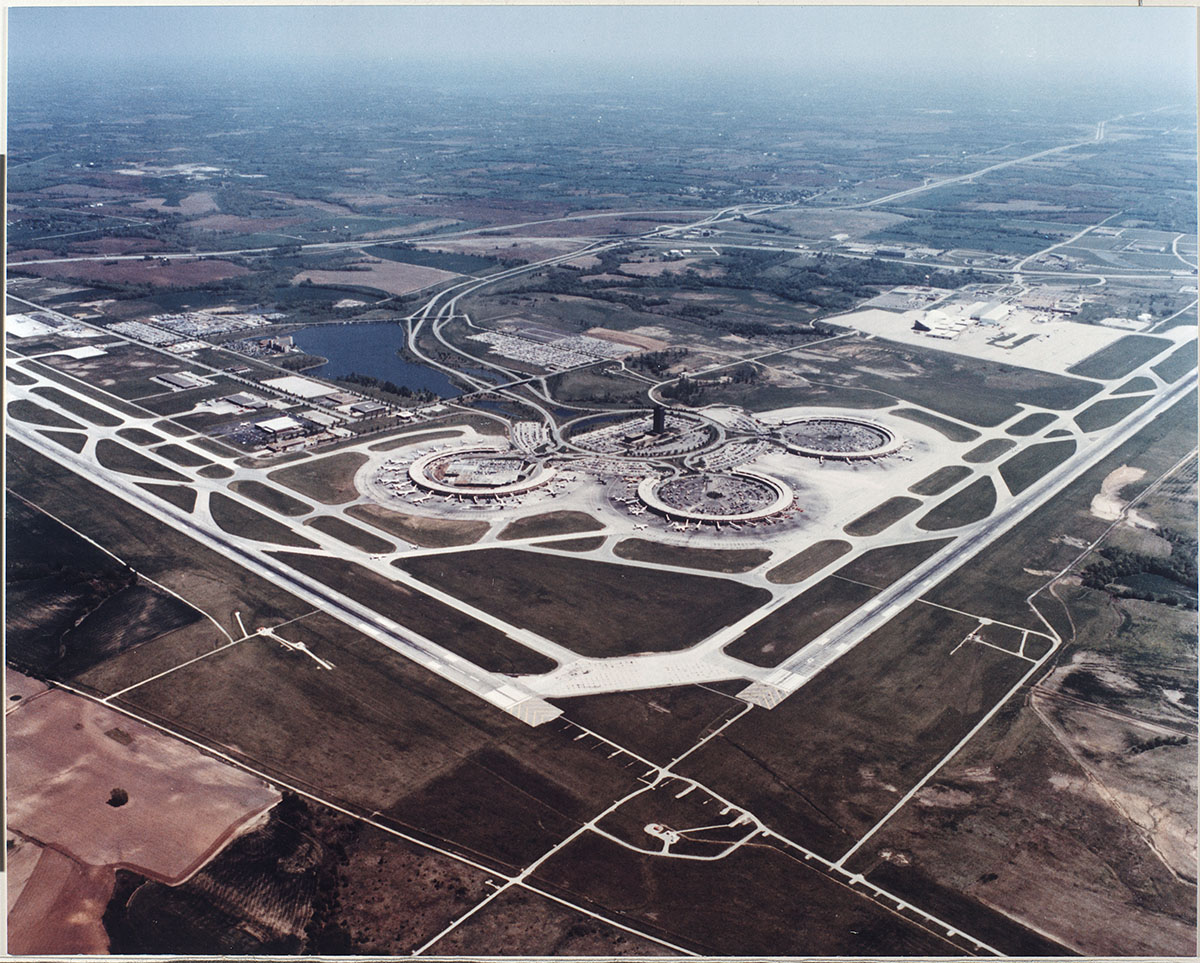 Aerial view of Kansas City International Airport, looking northeast. The TWA overhaul buildings are also in view,  as well as the control tower, runways and planes around the A, B, and C terminals. Parking lots and other buildings adjacent to the airport also can be seen. 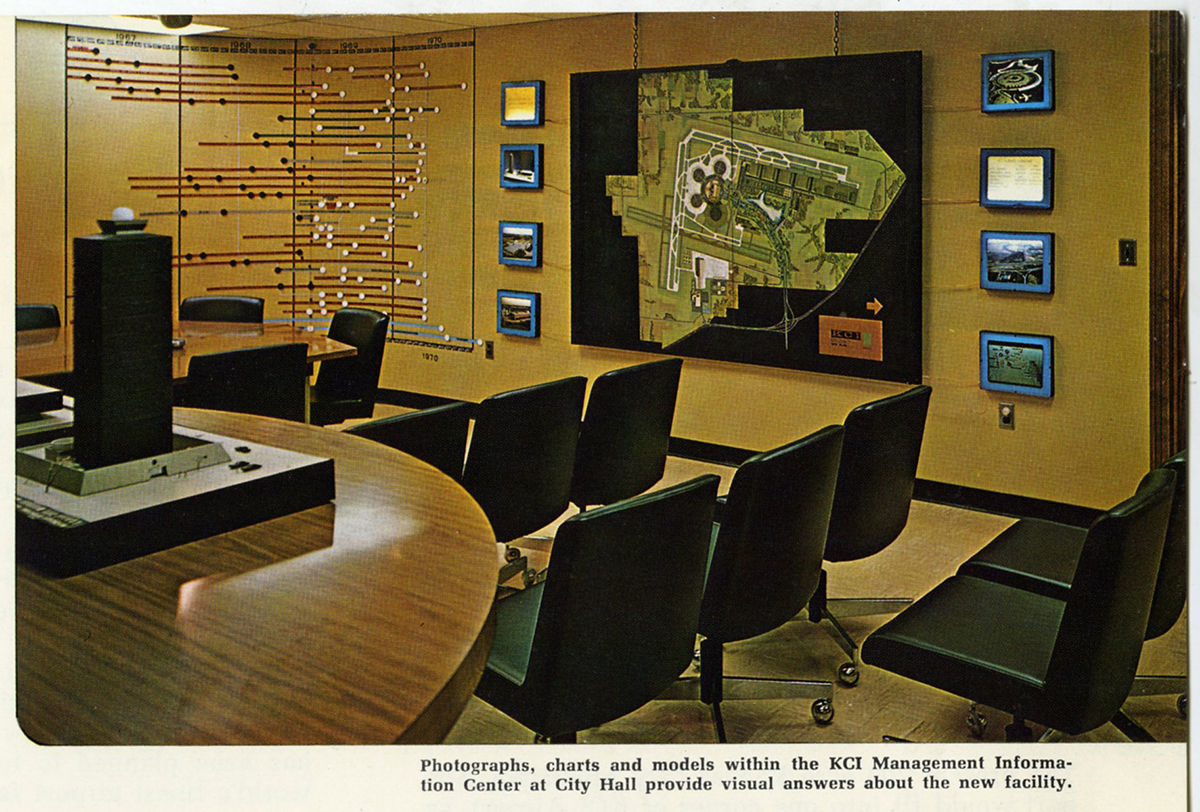 Interior image of the KCI Management Information Center, located in City Hall. The center contained models, charts, and other information related to the new airport. 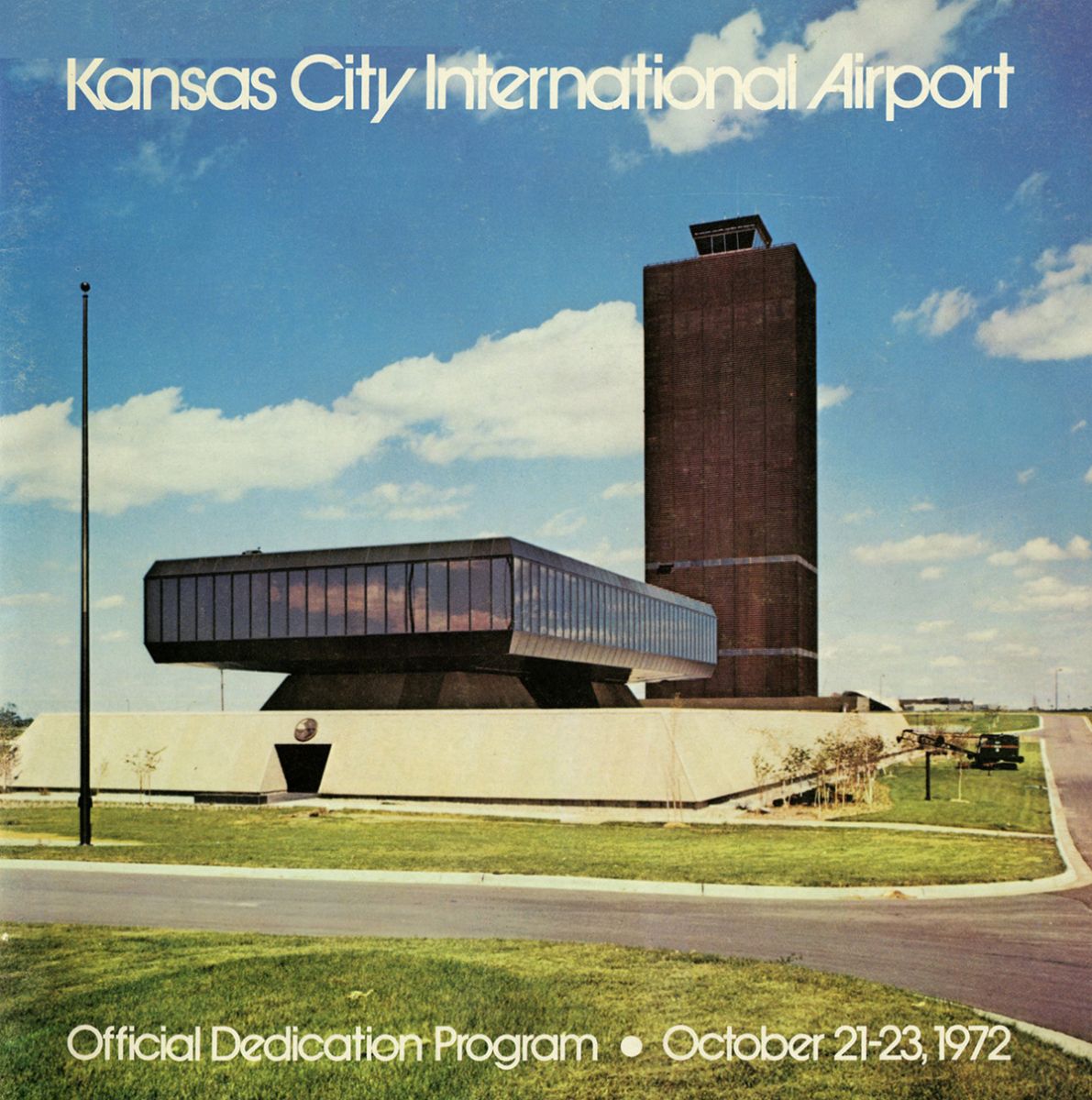 Cover of the official dedication program for Kansas City International Airport. The program details the city's airport history, design and construction of the new airport, and the dedication ceremony. 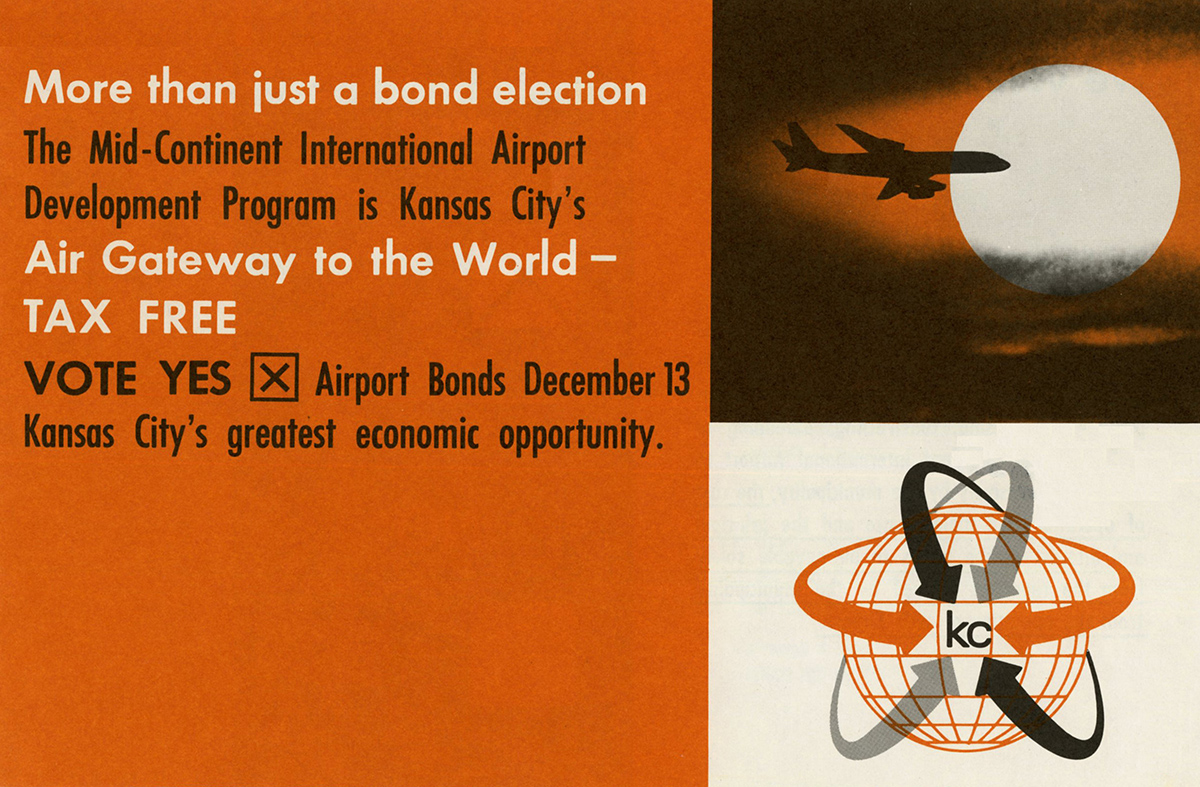 Cross-section illustration of KCI airport showing the straight line from passenger parking to the jetway. The rendering was included in the airport’s official dedication program.