Something's Fishy with this KC Q

Dan Werkowitch recently submitted a question to What’s Your KCQ? regarding a story he heard from his father: "My dad said when he was a child in the 1950s, a whale was brought into town on a semi and packed in ice. He paid a nickel to see it. Did it happen?"

Whale, yes, we think so.

In October 1953, three brief articles appeared in The Kansas City Times (the morning edition of The Star), detailing the exhibition of a 40-ton, 42-foot, embalmed gray whale named Winnie. Winnie had met an untimely end a year earlier, when she encountered a U.S. Navy destroyer off the coast of San Diego and lost her tail. The DuPont Company built and attached a new plastic tail, and Winnie’s preserved remains were sent on a nationwide tour. 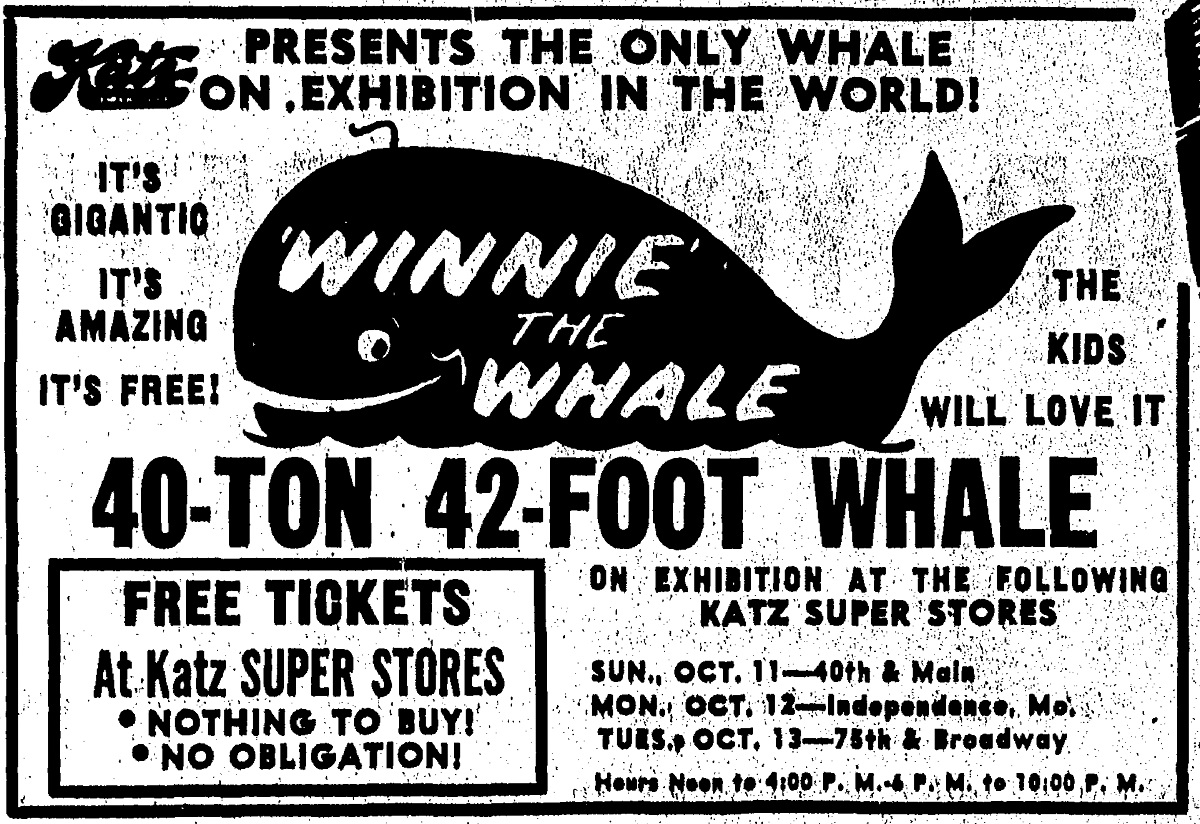 Other newspapers from around the country describe how Winnie traveled the country on a specially designed trailer truck. Accompanying her was an exhibit of whaling equipment used through the ages.

Winnie was on display in Kansas City from October 8-18 in the parking lots of various Katz Drugstores. Visitors could pick up a free ticket to the exhibit at any Katz location.

Some of the details of the story handed down to Werkowitch don’t add up (Winnie wasn’t packed in ice, and admission was free), the whale’s visit was certainly memorable. The Times twice noted how popular the attraction was. On October 11, about 3,800 people – including five full buses of children – turned up at the Katz store at 40th and Main to see her. During her time here, the paper later noted, a total of 74,788 people visited Winnie, a number that today would come close to filling Arrowhead Stadium. 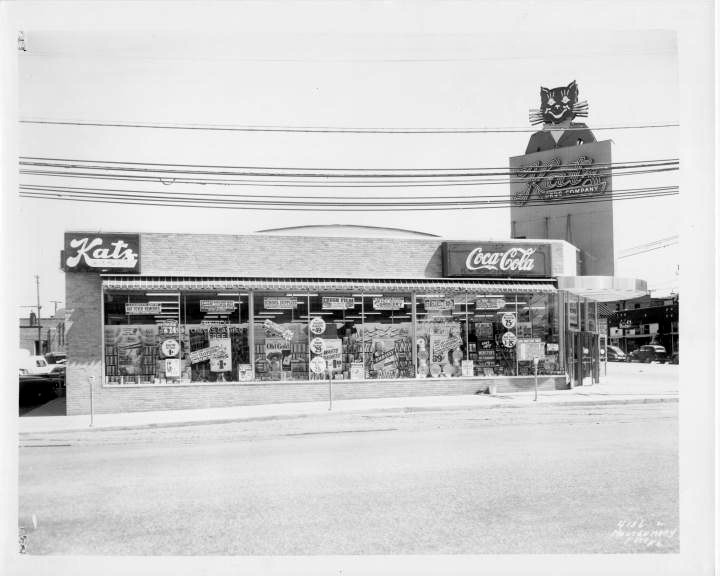 Coincidentally, there’s another Winnie the whale swimming through Kansas City history. In 1956, a two-ton, 16-foot-long concrete whale by the same name made its debut at the zoo. Children and adults could walk through its 7-foot-wide mouth and observe a goldfish tank inside. This Winnie was replaced in 1967 by the concrete Great Blue Whale, which remained an attraction until the 1990s. 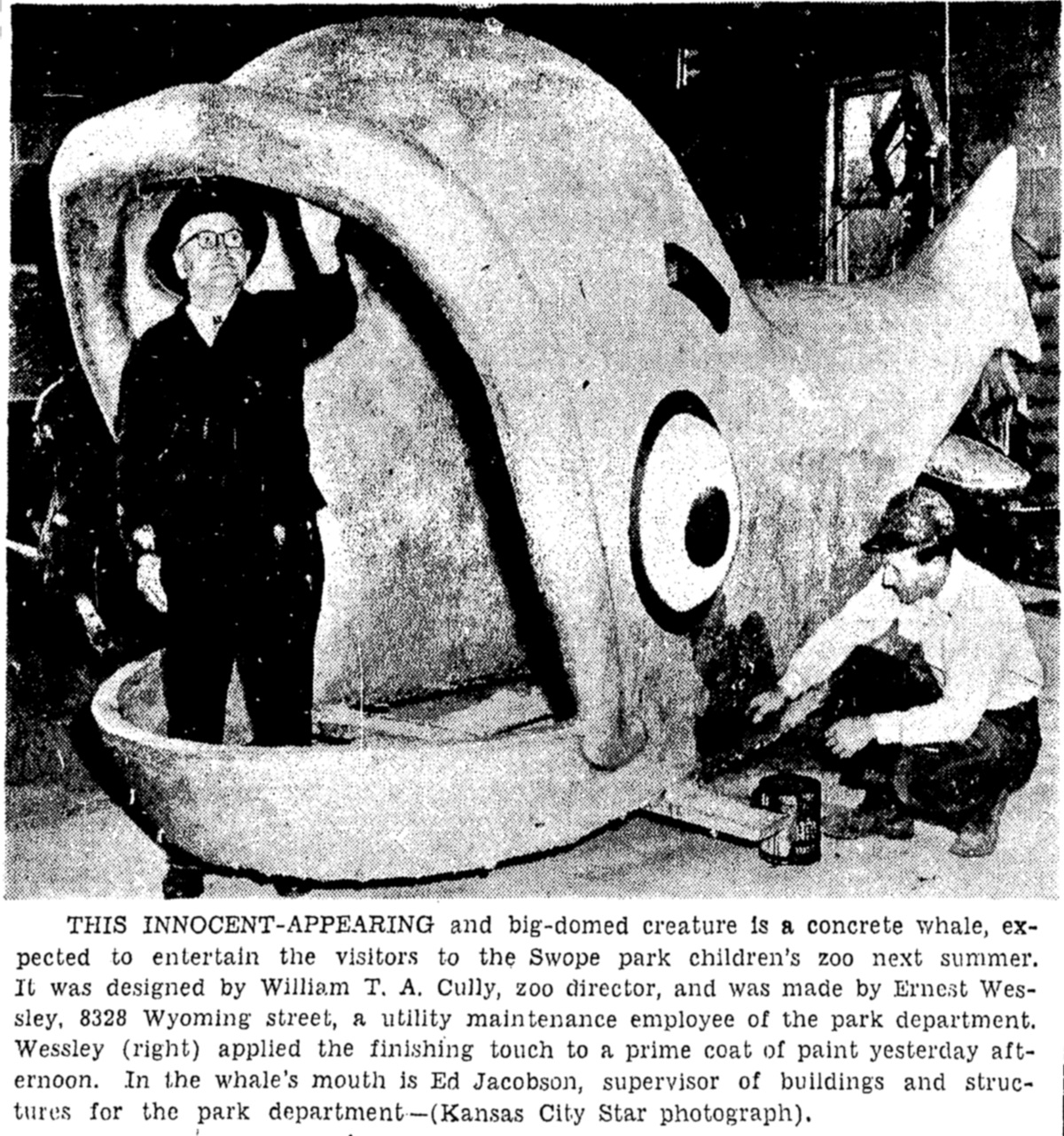 To confirm that the exhibit happened, we went to the newspapers. We consulted online and microfilmed archived versions of The Star and The Times as well as databases offering access to additional newspapers around the country. A guide to searching old newspapers can be found on the Missouri Valley Special Collections website. Information and photos regarding the Katz Drug Company were located in a subject file on the company, the special collections’ General Photograph Collection (P1), and in The Kings of Cut-Rate by Brian Burnes and Steve Katz, which is available for checkout at any Kansas City Public Library branch.