The thought prompted a reader to ask What’s Your KCQ?, a partnership between The Kansas City Star and the Kansas City Public Library: Wasn’t there a time when football was banned in Kansas City high schools?

Believe it or not, yes. There was a period in the sport’s early history when it had a bad reputation among the city’s educators and parents. The Friday night lights, wherever there were lights … went dark. 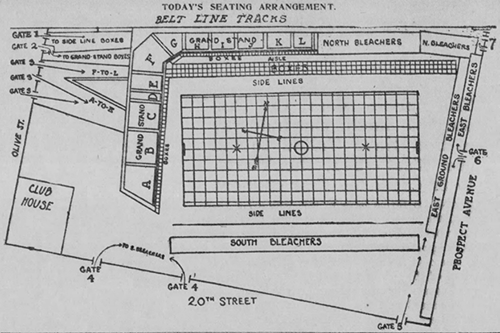 Layout for an early football game at Association Park, including the
grid pattern that give fields their “gridiron” nickname. | The Kansas City Star

Go back a little more than a century. The Northeast and Westport high school football squads met on the grounds of The Parade at 15th Street and The Paseo on a crisp October day in 1918. Westport won unremarkably, 19-0, but a reporter for The Star noted that this was the first time a football game had been played between two of the city’s high schools since 1905, when it was banned following the death of a player during a contest.

If the story was true, a ban would certainly seem appropriate.

What really happened wasn’t quite as harrowing, but still raised a legitimate concern. 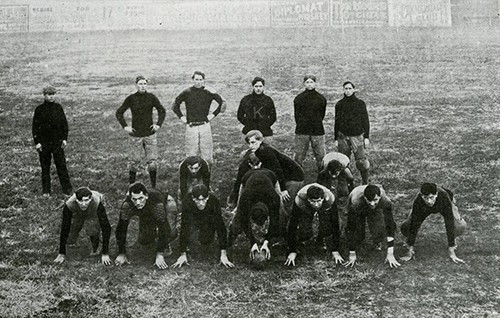 Thirteen years earlier, the Manual High School team had traveled to Lincoln, Nebraska, to play a Thanksgiving Day game. At some point, star halfback Homer Gibson, was kicked in the head. Helmets weren’t widely used in the sport at the time, and even if Gibson had been wearing one, it would have been a cap constructed of leather that didn’t offer much protection.

It was immediately apparent that the injury was serious, and Gibson was rushed to a hospital. There, his condition deteriorated. He lost the ability to speak, and paralysis set in. Doctors determined that a concussion caused a blood clot to form on his brain, and they hurried him into surgery to have the mass removed.

Contrary to the 1918 story in The Star, Gibson survived. The surgery was a success and his condition improved. After nearly a month in the hospital, he was cleared for the trip back to Kansas City.

Despite his recovery, an organized movement against the sport calcified around the incident. All remaining Manual games for the 1905 season were canceled, an action initiated by Gibson’s teammates rather than by school officials. Parents across the city also began pulling their sons out of football.

On December 16, just a few days after Gibson returned from Nebraska, the principals of Kansas City’s schools voted on a measure to ban the sport. Opponents of the censure insisted that football inspired school spirit and was so popular, students would find ways to play outside of school supervision. 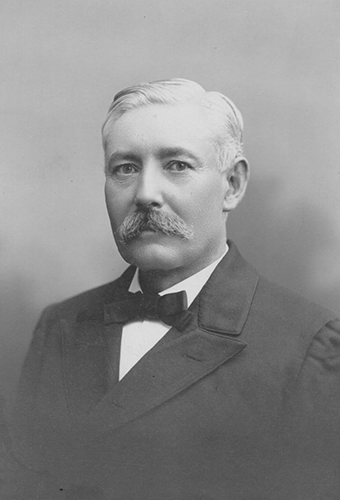 James M. Greenwood, president of the school board, echoed calls by U.S. President Theodore Roosevelt to make the sport safer for players. In keeping with his “strenuous life” philosophy, Roosevelt ardently believed the toil and strife inherent in the game encouraged positive traits in young men. But the injury rate was a problem of national scale.

Estimates differ, but the 1905 season was particularly brutal for players. As the local ban was debated, area principals were told that football had caused 25 deaths and over 140 serious injuries that season alone.

With a 38-8 vote, the ban passed as national outrage over football’s danger was coming to a head.

Experts trace the surge in injuries to the introduction of the flying wedge by Harvard College in a game against Yale in 1892. The play was simple. As soon as the ball was snapped, players on offense aligned into a wedge and locked their arms, the ball carrier tucked behind them. They then plowed into the defense. With only five yards needed for a first down, teams quickly learned they could run the wedge almost exclusively and efficiently move down the field.

Ninety-minute games were a succession of brutal collisions and massive dogpiles. 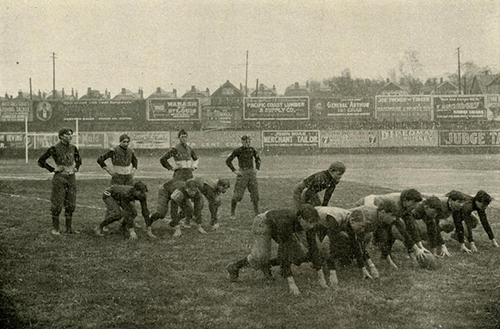 The roughness was compounded by an absence of passing. Players could toss the ball latterally, behind them, or kick it away, but forward passing was illegal. Another problem was the lack of protective equipment. In the early 20th century, helmets had started to appear on football fields but weren’t widely used, and they didn’t become required until 1939. 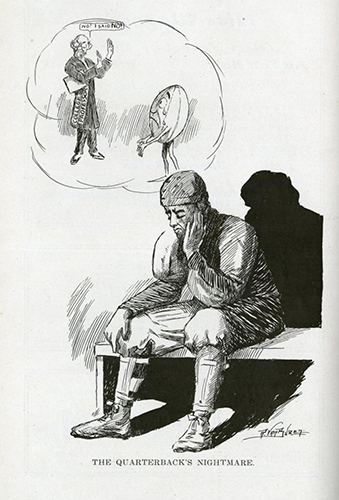 A student-created cartoon in 1909, lamenting the loss of football. | Kansas City Public Library

Led by Roosevelt’s call, the Intercollegiate Athletic Association, the forerunner of today’s NCAA, adopted new rules to improve player safety. The flying wedge would no longer be allowed. The forward pass was added. And to encourage passing, 10 yards would now be necessary for a first down. The length of games was also reduced from 90 to 60 minutes.

Alas, these changes would not be enacted in time to head off the Kansas City ban. High school football was not played in the city in 1906 or 1907. Manual students largely remained steadfast in their support of the ban, but Central High School students led a campaign to revive the sport and convinced their principal to allow a team to take the field for the 1908 season.

Playing schools outside of the Kansas City district, Central’s inexperienced squad faced stiff competition and won only one game. It played just two games in 1909, winning one. The school’s administration then shut the program down again. 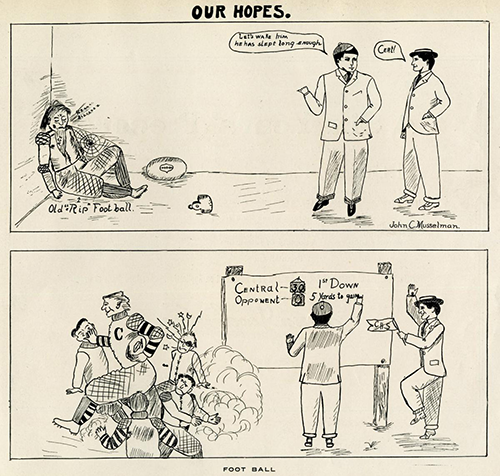 While high school football was banned, Kansas City fans delighted in yearly clashes between the University of Missouri and the University of Kansas teams at Association Park, now called Blues Park, at 20th Street and Prospect Avenue. In certain years, the contest was the only organized game in the city. Additionally, Lincoln High, the city’s school for Black students, allowed football around 1914. 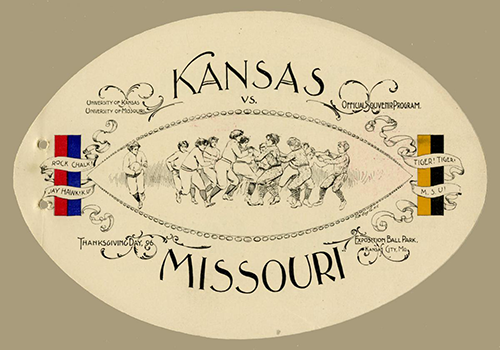 Opponents of the high school ban were correct in their assumption that students would find ways to play in spite of district policy. Privately organized teams representing the YMCA, the Kansas City Athletic Club, and other organizations spring up around the city. 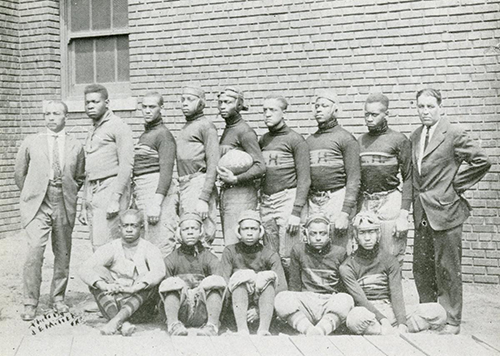 Then, in 1918, teams representing Central, Manual, Northeast, and Westport returned to the gridiron. Accounts of their games noted the sport’s new emphasis on speed over brute force, liberal use of the forward pass, and modified rules to reduce injuries. Players even donned shoulder pads and leather helmets to provide at least a modicum of protection. Westport, with many of its players having played together on a successful Country Club team, won the district’s first championship since the sport was banned. 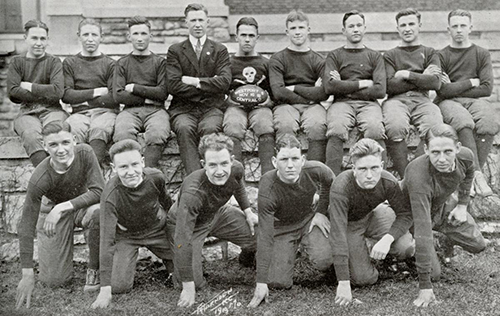 Sadly, the 1918 season was cut short by order of the health department due to the terrible flu pandemic sweeping the city.