Post date:
Friday, April 16, 2021
Vartan Gregorian’s towering legacy as a scholar and humanitarian stretches from his presidencies of Brown University and the philanthropic Carnegie Corporation to eight transformative years as head of the New York Public Library.

It touches, too, on Kansas City and the Library.

Gregorian, who died Thursday night, April 15, at age 87, delivered the keynote address at the 2002 launch of a campaign to relocate the downtown Central Library into the stately but then-empty former First National Bank building. It was an instantly memorable testament to the importance of public libraries to their communities.

“In our democratic society,” he said to the gathering at the Kansas City Club, “the library stands for hope, for learning, for progress, for literacy, for self-improvement and for civic engagement. The library is a symbol of opportunity, citizenship, equality, freedom of speech and freedom of thought, and hence, is a symbol for democracy itself.”

He called libraries “the DNA of our culture … the mirror held up to the face of humankind, the diary and textbook of the human race.”

The Library invited Gregorian back in 2019 to mark the 15th anniversary of the Central Library’s move. He accompanied then-Director Crosby Kemper III in a public conversation on the continuing impact of libraries and the importance of liberal arts, joined near the end of the program by his son, Kansas City Star sports columnist Vahe Gregorian. 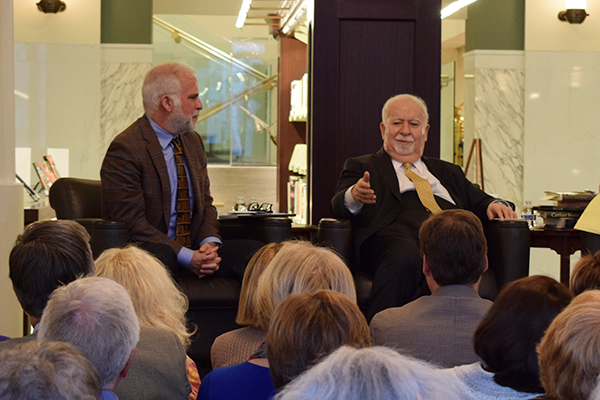 Vartan Gregorian (right) at the Central Library in April 2019 with his son, Vahe.


Born to Armenian parents in Tabriz, Iran, Gregorian received his secondary education at the Collège Arménien in Beirut, Lebanon, and came to the United States in 1956 on scholarship to Stanford University. He became a beloved, much-decorated naturalized citizen.

Gregorian headed the Carnegie Corporation for 24 years until his death in New York City. Prior to that, he spent nine years as the president of Brown and, from 1981-89, as president of the New York Public Library. He was widely credited with restoring the library’s status as a cultural landmark.

He also served as provost at University of Pennsylvania.

Noting his “intellectual excellence, proven administrative savvy, and, perhaps most of all, a rigorous and joyful respect for humanity,” the National Endowment for the Humanities awarded Gregorian the National Humanities Medal – presented by President Bill Clinton – in 1998. Philanthropist and publisher Walter Annenberg described Gregorian as “easily the most unique individual I have ever known.”

President George W. Bush presented him with the Presidential Medal of Freedom, the nation’s highest civilian honor, in 2004.

Gregorian is survived by three sons, including Vahe.


"Libraries as Acts of Civic Renewal," featuring remarks originally given by Vartan Gregorian during the public launch of the capital campaign for the Central Library on October 17, 2002, is available as a digital PDF download here.


Gregorian returned to the Central Library in April 2019 to commemorate the 15th anniversary of the location's move into the First National Bank building. He sat down with Director Crosby Kemper III for a public conversation on the continued significance of libraries, the importance of liberal arts, and the pair was joined by Gregorian’s son, Kansas City Star sports columnist Vahe Gregorian.