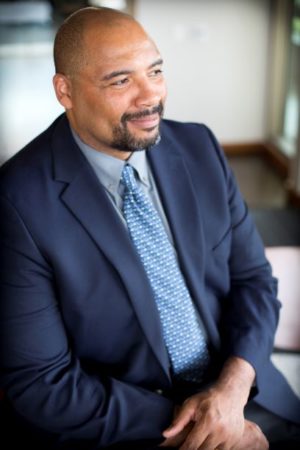 While playing football for the Kansas City Chiefs in the mid- to late 1990s, he founded an afterschool program designed to help children “cultivate a voice” through art and community involvement. Later, he moved into academia at UMKC and then Emory University and broadened his reach through his work as an historian, author, and curator of art.

He became a recurring, and welcome, presence at the Kansas City Public Library, speaking twice about new books he had written and participating in a two-day symposium on KC's “wide-open town” era of the 1920s and ’30s. In both affection and his time, he was generous to organizations across the city. McDaniels served on the boards of the Negro Leagues Baseball Museum, the National World War I Museum, and the Midwest Black Archives, among other institutions. Only five months ago, he was back to deliver the keynote address for Veterans Day activities at the WWI Museum.

“I’ve had a love affair with Kansas City, it seems, since I moved here, especially the history and baseball and jazz and the community,” McDaniels said in 2012, near the end of a five-year teaching tenure at UMKC. “I played for the Chiefs, yes, but I found myself more a part of the community."

The unexpected news reverberated to the office of Kansas City’s mayor. “Professor McDaniels was an outstanding leader and educator,” Quinton Lucas wrote on Twitter. “I extend my deepest condolences to his family, friends, and all the communities he so positively impacted.”

McDaniels’ last visit to the Library was in October 2018, when he discussed his book The Hemp Breakers at the L.H. Bluford Branch. It used an amalgam of poetry, music, historical narrative, and archival materials to examine the arc of African American life in our country, telling the story of a man named Blue from his roots in Africa to his time as a Union soldier and later life in Kentucky.

At the downtown Central Library in April 2016, McDaniels was part of a panel that looked back at arts and culture in Kansas City in the freewheeling time of “Boss Tom” Pendergast. And he talked at the Central Library in May 2014 about his book Prince of Jockeys: The Life of Isaac Burns Murphy, spotlighting the 19th-century rider – an African American – who became the first three-time winner of the Kentucky Derby and highest-paid U.S. athlete of his time.

Originally from California, McDaniels graduated from Oregon State University in 1990 with a degree in communications. He was a standout football player there and eventually worked his way to the NFL and the Chiefs, for whom he played 74 games over six years as a defensive lineman under coach Marty Schottenheimer. In the offseason, he worked toward a master’s degree in history.

After retiring in 2000, he would go on to earn a doctorate in American Studies at Emory.

McDaniels’ multifaceted life was eloquently put in perspective by former Kansas City Star sports columnist Joe Posnanski, who got to know both the player and the man during and after McDaniels' time with the Chiefs. “He had some good moments on the field. He played on some very good defenses,” Posnanski wrote in a blog post Monday morning. “But that was all secondary.

“Once he got to the NFL,” Posnanski went on, “he realized exactly why his instincts had led him there. As an NFL player, he had a platform to do the things that his heart sought. He could run a writing program for kids at the public library, and they would actually come because he was a football player. He could start the ‘Pellom and I Like Art’ program and spur creativity inside children.

“ ‘What makes you feel free?’ he would ask them.

“He could speak out on the haunting beauty of 18th and Vine, which had once been the center of African American culture in Kansas City, and try to bring some of that wonder back. He could write a book of poetry and publish it. He could invent a dental product called ‘Dr. Brizzly,’ to make going to the dentist a bit less painful and scary and sell it. He could write a book called So You Want to Be a Pro? where he would talk to kids about using their sports skills to become a professional -- not only in sports (where, he wrote, the odds are against you) but in life.

“He could eventually go to Emory and get his Masters and then his doctorate in American Studies. In time, he became a husband, a father, a professor, a painter, a poet, a biographer, an activist, an artist, a curator of the African American collections at Emory. He, perhaps more than anyone I’ve ever known, followed his heart wherever it led.” 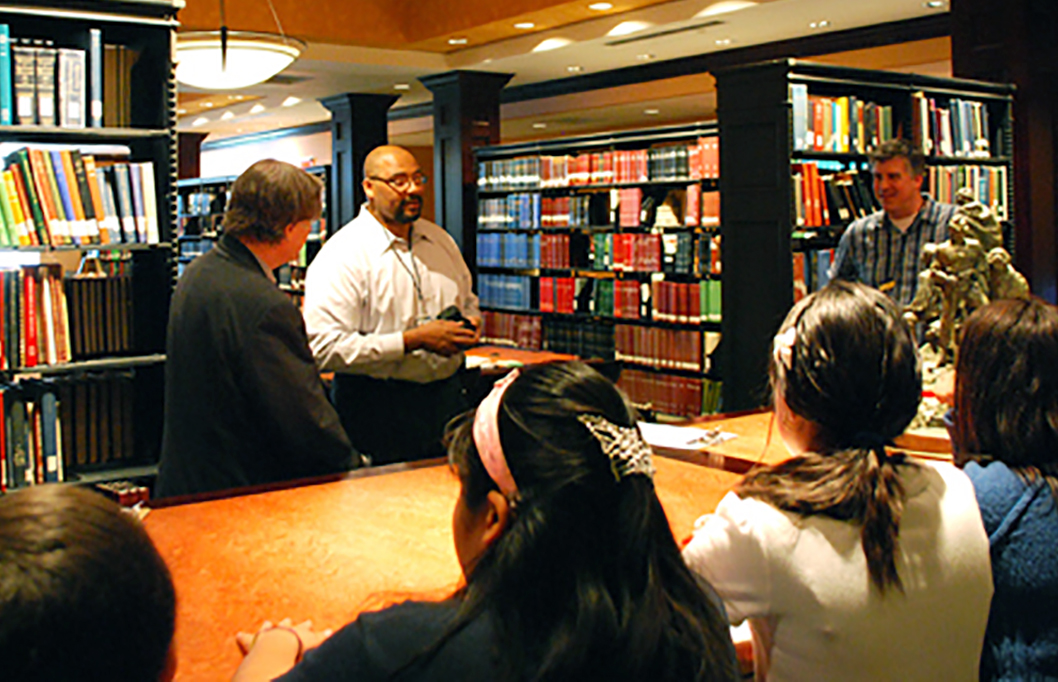 Pellom McDaniels (center), during a 2011 meeting with fifth graders from Trailwoods Elementary in the Central Library's Missouri Valley Room.