It’s been almost two years since “What’s Your KCQ?” whiffed on a question that sounded simple.

Lewis Jones asked us, “What happened to the giant chandelier at the old Glenwood Theatre?” 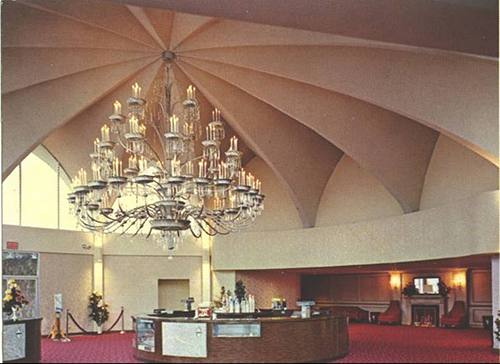 Turns out that tracking it down wasn’t simple at all.

In fact, “epic quest” might be its cinematic equivalent.

Let’s start with a flashback to November 1966, a time when Johnson County was seriously flexing its new economic muscle. It’s when Dickinson Theaters opened the Glenwood Theatre at Metcalf Avenue and 91st Street in Overland Park.

The building combined elements of an old school movie palace with mid-century modern flair. Its 800-seat auditorium featured a giant curved screen and plush red seats. The lobby dazzled with fireplaces and a circular concession stand topped by a 15 feet by 15 feet crystal chandelier, reported to have been imported from Italy. 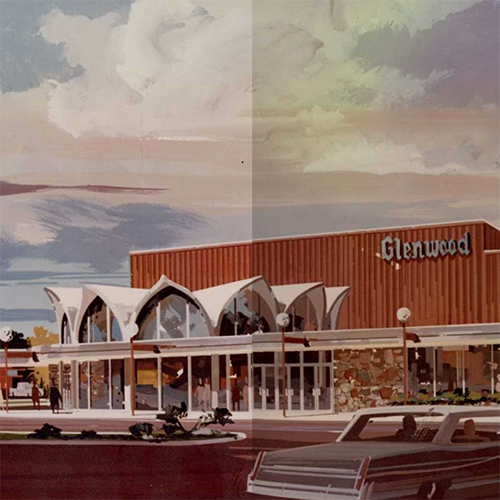 A rendering of the Glenwood Theater, courtesy Johnson County Museum.

Business at the Glenwood was very good. Tons of tickets were taken, particularly in 1977, when a little film called “Star Wars” landed in its lap!

Through four decades, many a date night unfolded there. But eventually the age of the multiplex and the purchasing power in more distant suburbs began to take a toll.

In 1999, Dickinson sold the Glenwood to Goodrich Quality Theatres. They closed it for good in May 2000 and auctioned off the contents a few months later. 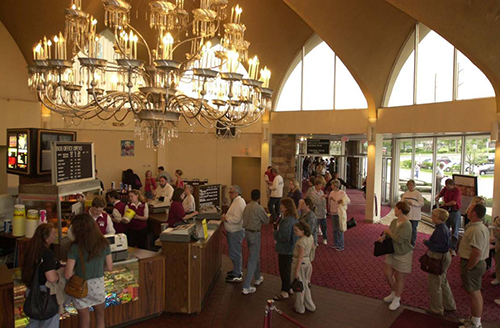 Under the lobby’s chandelier with more than 500 crystals and 200 lights,
Glenwood Theatre patrons stood in line for tickets and concessions for the last time
before the theater closed. | Julie Jacobson, Kansas City Star

We do know that the space-age sign and many of those fancy red seats went to the Fine Arts Group, which repurposed them for a “sequel” to the Glenwood at the Metcalf South Mall. When the mall was demolished in 2015, the seats (but not the sign) moved to what’s now called the Glenwood Arts Theatre on Mission Road. 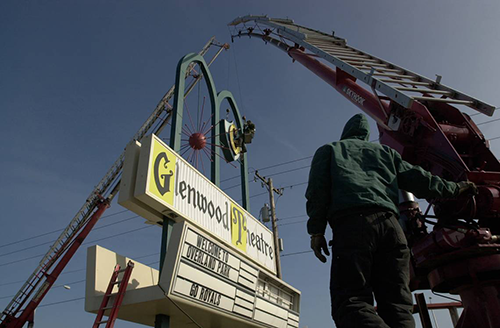 Suspended from a crane, Dave Brunner of the Acme Sign Co. cuts through a metal support
on the ‘G’ in the soon-to-be razed Glenwood Theatre, in 2000. The ‘G’ and other parts of
the sign were purchased by The Fine Arts Theatre Group. | Todd Feeback, Kansas City Star

Ben and Brian Mossman, who own the Fine Arts Group, are well-versed in theater salvage and restoration. But neither of them, nor their partner, Wade Williams, knew what happened to the iconic chandelier.

In true detective movie tradition, they could only tell us who dismantled it—a former Dickinson employee named David M. Smith.

Surely, he’d know where it went!

Smith did indeed remember that it “took a whole day” for him to take apart the chandelier and pack up the pieces to “put in storage” until it could be re-installed. 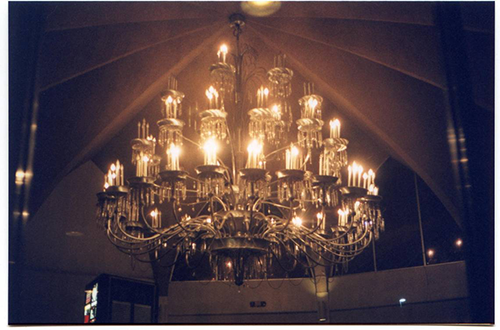 Twenty years later he couldn’t say for sure, but he’d always believed it was headed for “a big church out south.”

Like Leawood’s Church of the Resurrection perhaps? A rumor to that effect had apparently been circulating for years. But Kathy Bien, the church’s communications director, made it clear that “we don’t have it and never did.”

Around that time, another character joined the chase—Mike Keller. He’d written extensively about Dickinson’s history, and the missing chandelier, in a blog for the Johnson County Library.

Thanks to a tipster, we turned our attention to another megachurch. The First Family Church on 143rd Street was certainly big enough for a huge chandelier. Until Pastor Jerry Johnson and his congregation started to fracture.

After the church folded in 2011, the building and most of its contents were purchased by the Blue Valley School District.

Could the treasure be tucked away somewhere deep inside the district’s Hilltop Learning Center? We thought we were on to something, but Blue Valley checked all the paperwork. No record of wayward chandeliers.

We called the Goodrich headquarters in Grand Rapids, Michigan. The folks there sent us to a developer in Wichita whose company had handled the theater liquidation. Every conversation ended pretty much the same way: “Well…that was twenty years ago.”

As screenplays go, our “whodunnit” was sorely lacking a “gotcha.” Then late last year, an unexpected hero rode to the rescue: Facebook.

The Glenwood Antique Mall--newly opened in the old TJ Maxx space at Metcalf Avenue and 91st Street—logged on to announce that they had the chandelier! 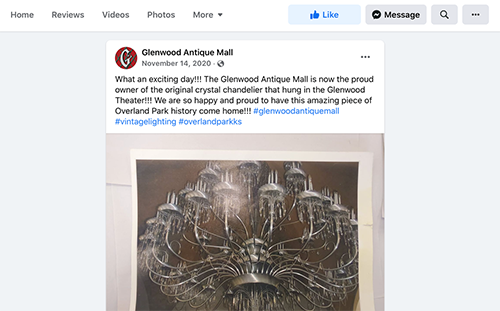 Screengrab from the Glenwood Antique Mall

The details were frustratingly sketchy. The post said only that they’d obtained it from a “private owner” who’d kept the item in storage.

Most of the commenters were thrilled to hear that the chandelier was “coming home.” (It’s literally across the street from the old theater’s site.) But social media being what it is, a few also wondered if displaying it in a museum setting might be more appropriate.

Finally, a real third act for this crazy drama!

As shoppers roam throughout the antique mall, owner Kirsten Rowland winds her way toward a secret closet. It’s time for the “Big Reveal.”

“I grew up around 122nd and State Line,” she says. “The Glenwood is where we went to see movies.”

Rowland also owns Lily’s Estate Sales, which helps explain how she came to possess the celebrated chandelier. “The private owner was looking to sell it, and one of our clients made us aware. We wanted to make sure it stayed here in Overland Park.” 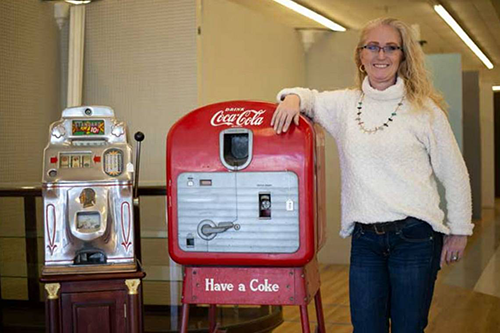 Rowland’s did not reveal that owner’s name. She didn’t reveal much of anything except that her purchase arrived as promised: in a U-Haul trailer filled with carefully packed boxes containing crystal pendants, poles and detailed instructions on how to reassemble it all in the right order--just like David Smith told us.

“He did a good job,” she smiles. “Everything is accounted for.” 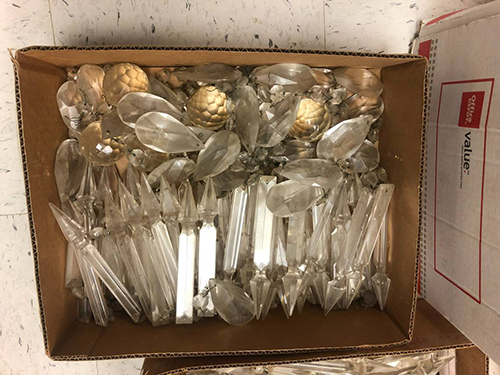 Pieces of the chandelier sit in boxes at the Glenwood Antique Mall. Randy Mason

But there is a hitch. The antique mall’s ceiling is neither high enough nor stout enough to hold the chandelier safely.

“It’s bigger than I remembered,” she admits. “It’s fifteen feet tall and the ceiling is only fourteen. I don’t want to cut the chandelier down by a foot or compromise its integrity.”

Rowland said she’s deciding precisely where in the store the big bling should reside, then will alter the infrastructure to handle it.

But don’t hold your breath--Rowland says the process won’t even begin until sometime in mid-2022.

After that, they’ll hire someone who can assemble chandeliers from a diagram.

The important thing, she said emphatically is, “It’s here and it’s not going anywhere.”

That’s good news to Brad Moore, president of the Overland Park Historical Society. He’s aware how few private owners would “have the space for it,” or take the actions necessary to keep local history like this in public view.

At the Glenwood Arts Theatre, Brian Mossman said simply, “It will be nice to see the chandelier hanging again.”

And our fellow sleuth Mike Keller still marvels that “something so big could be so hard to find.”

But hey, we finally found it, complete with a happy ending.