Does Kansas City show its heart as you fly over airport? KCQ looks out the window seat.

Dave Shull remembers a group planting “a heart-shaped grove of trees” that airplane passengers could see as they touched down or took off at Kansas City International Airport.

His first recollection is from when the group was trying to raise money for the project. And then, nearly 30 years ago, The Star covered the story when volunteers began planting the trees.

Shull, who flies in and out of Kansas City almost every week, says he tries to look for the heart sometimes but hasn’t spotted it yet. So for this matter of the heart he turned to “What’s Your KCQ?” — the partnership between The Star and the Kansas City Public Library — in hopes of an answer to his question: After all these years, “is it there?”

As far as we are able to tell from land records and Google Maps, yes, Kansas City has a heart.

But to get a glimpse at the heart-shaped forest from an airplane, you have to know where to look — and be lucky enough to nab a window seat. 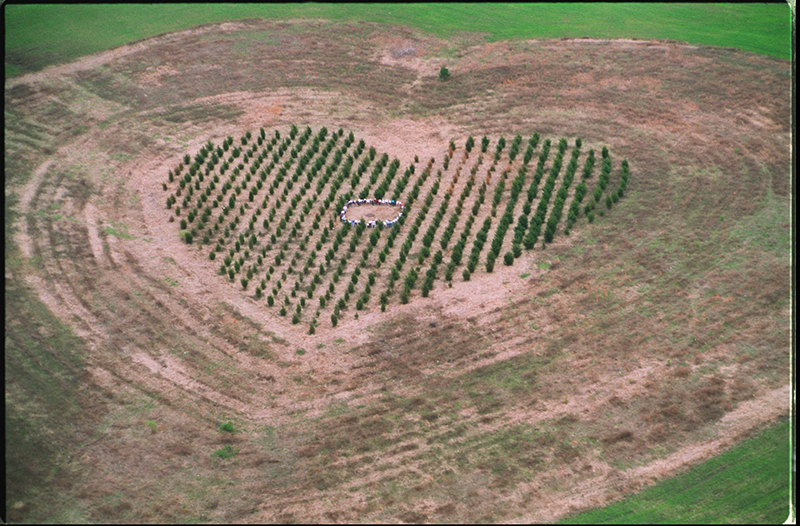 The project, known as the “Heart Forest,” is located southwest of the airport, off North Brightwell Road and N.W. 104th Street on a property owned by the city, according to records provided by Platte County.

The design was chosen to represent Kansas City as the “heart of America,” according to Rick McDermott, one of the Kansas City architects who was quoted in a 1990 article in The Star about the project.

“Basically, it could be the first thing you see as you arrive in Kansas City or the last thing as you leave,” McDermott said at the time. “It symbolizes the spirit of Kansas City and us being the geographical heart of America.”

Bob Berkebile, another local architect who led the project, told The Star in 1991 that inspiration for the heart forest came from Chief Leon Shenandoah, leader of the Iroquois Nation, who spoke at a local breakfast meeting during a World Peace Celebration in 1987. “’When in Kansas City, my heart warms, my spirit soars. ... You need to understand that this spirit is unique,’” Berkebile recalled the chief saying of his visit to the city.

Berkebile told the newspaper Robert Muller, former assistant-secretary general of the United Nations, then challenged Kansas City residents at the meeting to create a symbol for the city.

According to Berkebile, Muller suggested designing and planting rows of trees around the city to look like a heart, “big enough to be seen from outer space.”

“As I and others worked on implementing the concept, we realized that if we had taken Muller’s advice literally, and if we had been able to manage the land agreements with thousands of property owners to implement Muller’s vision, Kansas Citians would never have seen the heart,” Berkebile said in a recent email to The Star. “They would have only seen a curving line of trees on the landscape from private or commercial aircraft, and it could have only been seen from outer space on a cloudless day.”

Described as “an environmental statement and a symbol of the people and region,” the steering committee decided a forest of about 20 acres planted near the runways would be the most ideal scenario as it would be large enough to be seen by airplane passengers flying overhead, Berkebile said.

The group planned that the forest would measure about 1,000 feet across and contain five concentric heart-shaped rings of different types of trees, including cedar, hardwood, pine, oak, ash, hackberry and redbud, according to a brief history of the Heart Forest provided by the Kansas City Library.

A search for the best spot to plant the trees led the committee to the site at North Brightwell Road and N.W. 104th Street. At the time, the city had been leasing the land to a farming family. But after meeting with members of the committee, a father-son farming duo, Charlie and Steve Peterson, embraced the idea of the heart forest and offered up the land, according to the history.

The Aviation Department then agreed to lease 22 acres to the Heart Forest Foundation, which was established to collect donations for the project. They also received assistance of the Aviation Department; Stan Herd; a painter from Lawrence; a forester from Missouri Department of Conservation; and hundreds of volunteers.

Coinciding with Earth Week, volunteers on April 28, 1990, completed the first phase of the project, planting hundreds of cedar trees to make up the center of the heart.

For at least 10 years, volunteers returned to the site to plant more trees, adding to the rings. 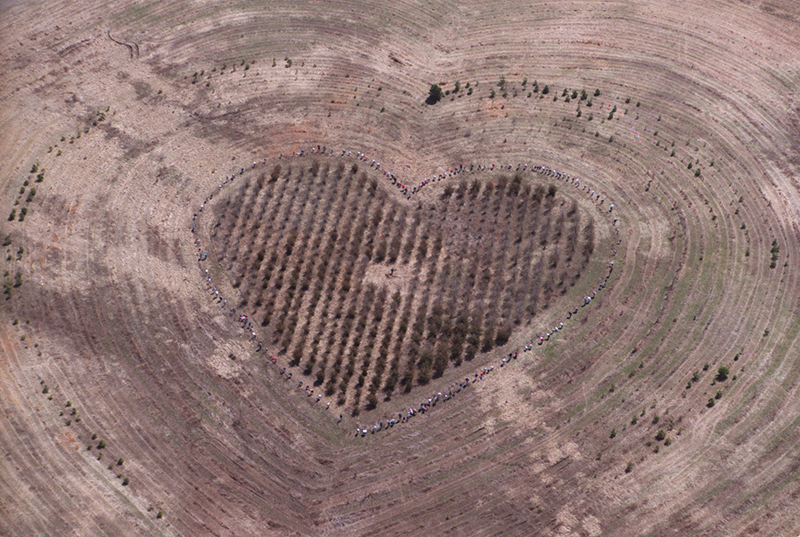 This is a 1997 file photo of the early stages of the Heart Forest, located at N.W. 104th Street and Brightwell Road near the Kansas City International Airport. The photo was captured after volunteers worked at the eighth annual spring planting.

Years after it was completed, volunteers continued coming back to pull weeds, replant and water the trees as needed.

As the forest matured, Berkebile said the farm leases changed, the Aviation Department’s leadership evolved and the management of the forest and the foundation grew dormant. Several years have passed since volunteers last got together to work on the forest.

However, Berkbile said there has been talk of refreshing and updating the forest as construction of the new terminal is underway.

“Several of the core volunteers have been in conversation about the importance of the unique KC Heart Spirit that Shenandoah and Muller first identified years ago,” Berkebile wrote to The Star, “and we are convinced that it is more critical today than it was when they first shared the idea.”

A brochure for the Heart Forest also gives a short summary of the history.