"When did Westport start becoming the entertainment district that it is today?"

In June we asked readers which Kansas City-centric question we should answer in our series “What’s your KCQ?” in partnership with the Kansas City Star. Westport tied for the winning question. The other top vote-getter — about the old road remnants near the Town of Kansas — will be answered soon.

Reader David Wilcox was walking around Westport one day recently, wondering when Westport lost its distinctiveness from Kansas City. And that led him to also wonder how the entertainment district was born.

Well, it depends on what you consider an entertainment district.

In the mid-1800s, Westport was the last point of civilization before pioneers headed west — serving as a trading post and outfitters.

"The draw here was it was the last place to get provisions if you were traveling on the Santa Fe, California and Oregon trails, which is now Westport Road,” said Alana Smith, president of the Westport Historical Society. "I tell the kids, it was the last QuikTrip — the gas for your car was the grain for the oxen. Your bag of chips, the grain for your flour."

But Westport also was a town with churches, blacksmiths, a couple of brothels, and “whatever you would find in a typical town,” Smith said.

Soon after Prohibition ended, the building now housing Kelly’s Westport Inn (500 Westport Road) was granted a liquor license and began its life as a saloon known as “The Wrestlers Inn.” It featured live wrestling (where bands now often set up) and a shuffleboard table, according to the Wiedenmann family, which owned the building from 1904 to 1996, when they sold it to Pat and Kyle Kelly. 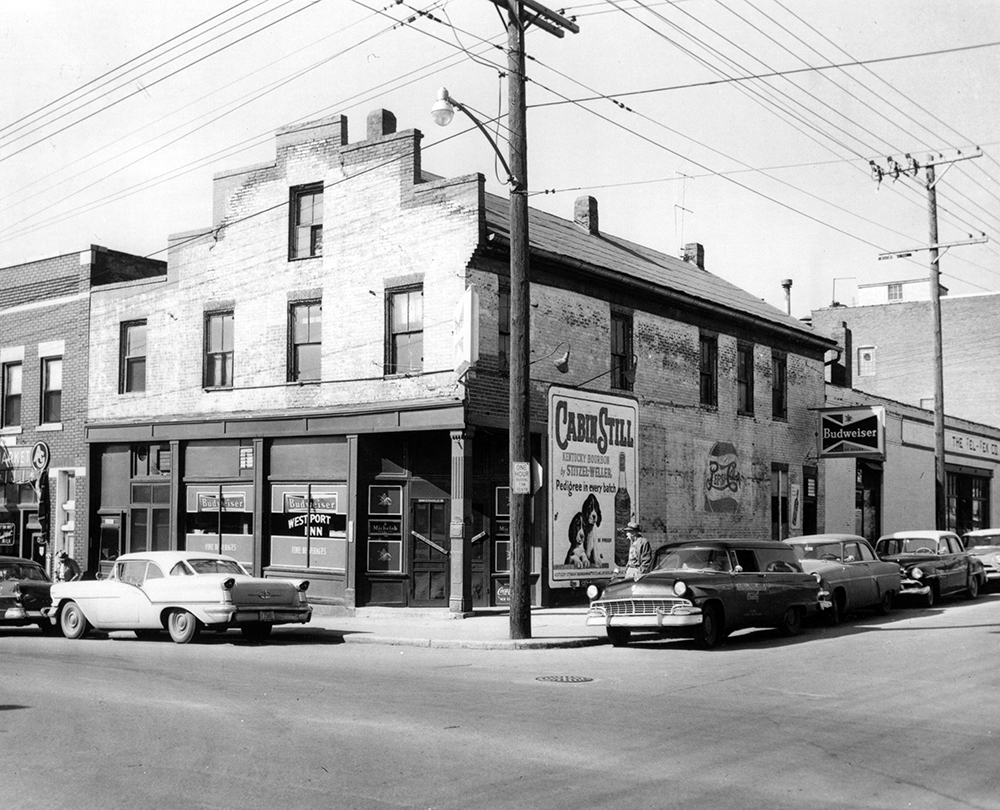 "I think it was a bit of a phenomenon," said Pat Wiedenmann, who married John Wiedenmann in 1948. "There were farms close by and when I was in high school in the 1940s and dating my husband, we would go in and have Cokes and see people in formal attire and people in bib overalls."

Kyle Kelly, son of the founder of Kelly’s and a current owner of the bar, said Westport then went from “a sleepy neighborhood to a ’60s transient, flophouse spot to a college student destination.

Then came the first major redevelopment in the early 1970s — Westport Square — on Westport Road between Broadway and Pennsylvania Avenue. By August 1976, Westport magazine said it was key to drawing city residents and visitors to the area.

"Ask any Kansas Citian where to find history, beauty and entertainment in one package and they’ll say 'Westport,'" the magazine said.

The Bijou Theater was the first to open on the revamped block, showing such films as Casablanca and Citizen Kane. Soon, it was joined by Blayney’s (meat and cheese boards with a basement bar), Chuck’s Steak House of Hawaii (steaks, lobster and prime rib), and The Souper Place to Eat (known as just the Souper, it served fresh bread, house-made soups, sandwiches and desserts).

More upscale restaurants then made Westport their home: The Prospect of Westport, where many Kansas Citians took their out-of-town guests for chicken a l’Orange on the patio or under the second story skylight, surrounded by lush plants; Stanford & Sons restaurant with its prime rib and popular flower pot bread; and the Classic Cup, first a tiny shop selling coffee beans that later expanded to a full-service restaurant offering wine tastings, cooking classes, catering, carry-out and a small retail shop.

"People weren’t used to cappuccinos. It was too strong," said Charlene Welling, former owner of the Classic Cup. "So we would serve them more like a latte and out-of-towners would criticize us. But that’s where we had to start."

A July 1977 article in The Star said Westport was known as an open-air strolling, drinking and dining area. It noted that there seemed to be a well-worn path from Kelly’s to the Harris House (then at 4057 Pennsylvania with an open-air deck on the roof) to Jack Straws Courtyard and Blayney’s and then down the alley to the Happy Buzzard where “de rigueur attire was a striped rugby shirt.” All had outdoor decks that would fill up during pleasant weather. Part of the courtyard behind the Prospect became a stage for free evening performances of the Westport Ballet.

"People were down there with their kids, more family entertainment, families on that lovely patio at the Prospect, Haagen-Dazs Ice Cream on Westport Road," said Charlene Welling, former owner of the Classic Cup.

Across Broadway at 3935 Central St., upscale Fanny’s Restaurant quickly became a regional draw with its modern Italian restaurant on the upper level — servers in black tie and ruffled shirts. As customers dined, they could watch the “show” through glass walls overlooking a disco on the lower level.

Loy Edge started bartending at Happy Buzzard in 1977 and then opened a design studio in the area. He later owned and operated several Westport bars and restaurants.

"I don’t think anybody thought of it as an entertainment district. People thought of it as a place with some really cool bars," Edge said. "It picked up a lot of momentum from the (River) Quay being destroyed. It was a post-collegiate, baby boomer scene. The beginning of casual dining."

Then in 1987, Manor Square opened at 4050 Pennsylvania as a multi-million dollar redevelopment of the Manor Baking Co. It was designed to draw customers throughout the metro.

The 170,000-square-foot complex featured office space, 40 retail and restaurant tenants and movie theaters. It had two nightclubs: London’s, with a sunken dance floor on one corner; and the 16,000-square-foot Heartthrob with a heart-shaped bar and three-tiered dance floor on the other. Manor Square had a five-level garage with 750 parking spaces. 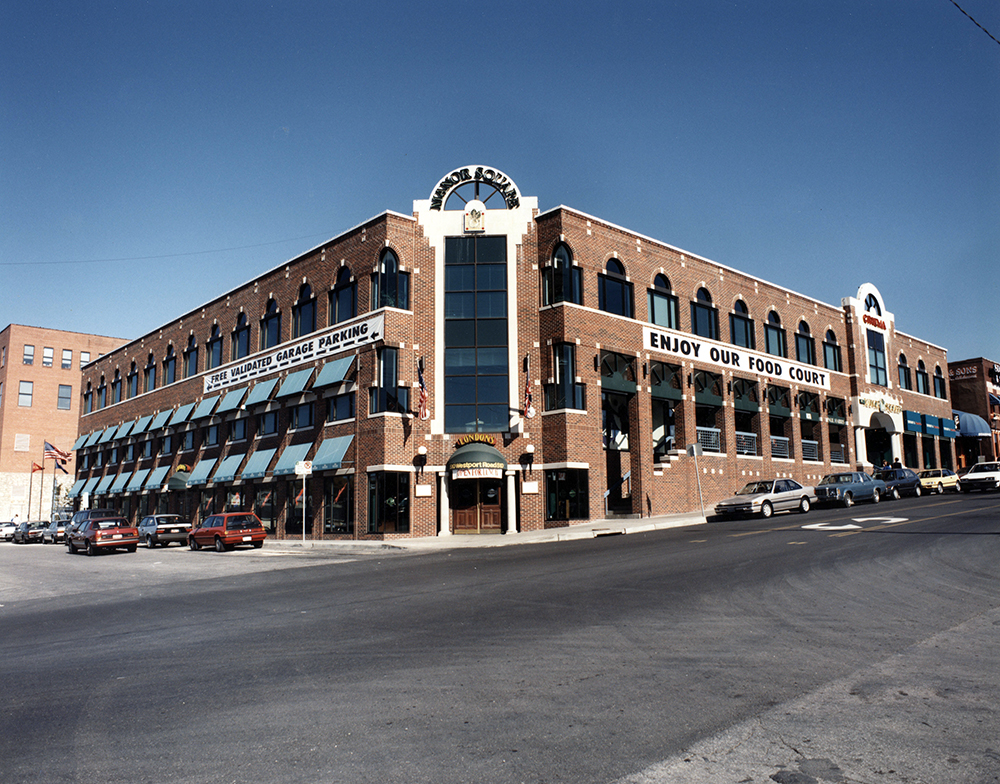 Then the owners of Stanford & Sons restaurant opened Stanford’s Comedy House around 1980, which became a starting place for young comedians who went on to become nationally known — Rosanne, Louie Anderson, Ellen DeGeneres and Jerry Seinfeld, according to The Star’s archives.