In this week’s installment of “What’s your KCQ,” a nostalgic reader asks: “What was the name of the upscale restaurant in the downtown Kansas City airport? I remember eating there as a kid about 50 years ago.”

The eatery in question was The Four Winds, established by renowned restauranteur Joe Gilbert. Located on the second floor of the Municipal Airport terminal, it was hailed as one of the best in town. Both travelers and locals, dressed in their Sunday best, gathered at the Four Winds to enjoy the cozy décor, thrilling view, first-class service, and—of course—the food. 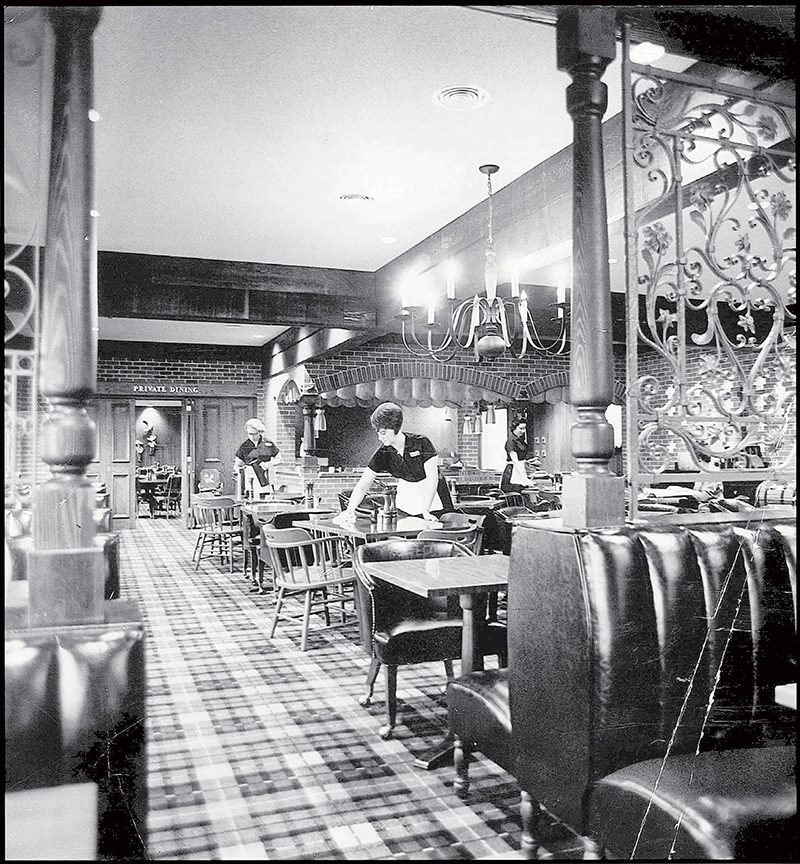 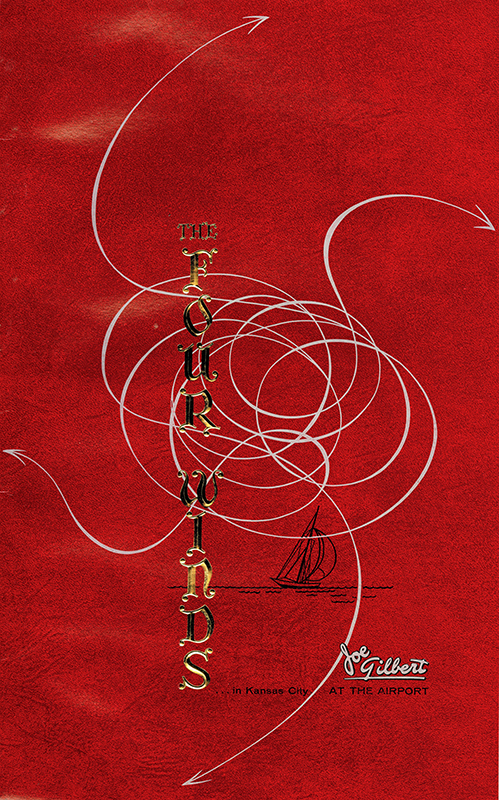 While the restaurant opened as The Four Winds around 1964, its origins dated back to 1940, when Joe Gilbert began leasing concessions at the old terminal in the downtown airport. As a young man, Gilbert started in the business as a dishwasher and then became manager of Fowler’s Lunch at the Westgate Hotel during the late 1920s. When he moved to airport concessions, he partnered with True N. Milleman, former manager of the Fred Harvey restaurant at Union Station. Together, they planned to create a Harvey-esque enterprise for air travel, providing classy and affordable dining along flight routes. 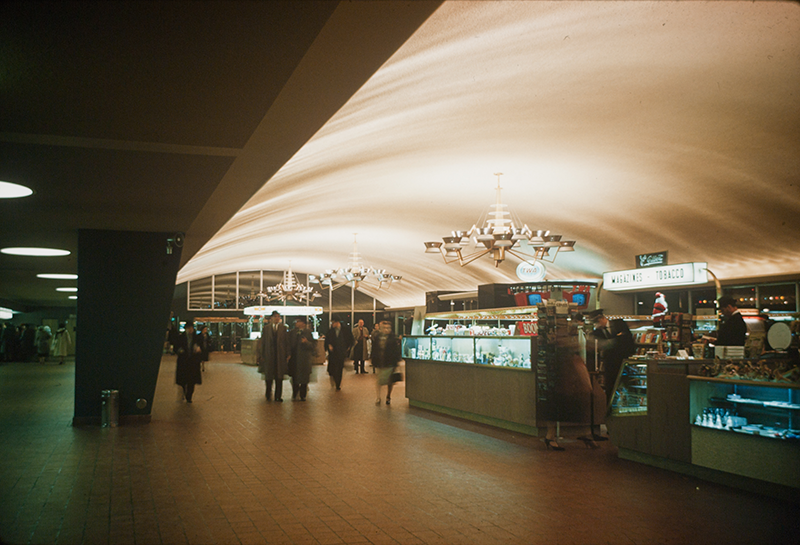 Their venture grew rapidly, with Gilbert’s son joining the business in 1945. Soon, they began providing in-flight meals for airlines, becoming pioneers in the airline catering industry. They continued to operate all of the food, beverage, news, and gift stands at the airport, including the main Milleman & Gilbert restaurant. The Kansas City Star introduced the establishment as “a de luxe restaurant to go hand in hand with the luxury of air travel.”

Milleman sold his share of the business to Gilbert in 1951 and, over a decade later, the restaurant was reborn in the new Terminal Building as The Four Winds. It opened along with three other Joe Gilbert establishments—the 24-hour Weathervane Coffee Shop, The Magic Carpet cocktail lounge, and the Lion’s Den pub. Now an expansive operation, the Four Winds sat 166 guests with additional private dining areas. Its kitchen supplied food not only for the airport lounges, but also for 1,500 to 2,500 in-flight meals per day. Insisting on the best possible service, Gilbert outfitted the waitresses with electronic receivers that beeped when their orders were ready. 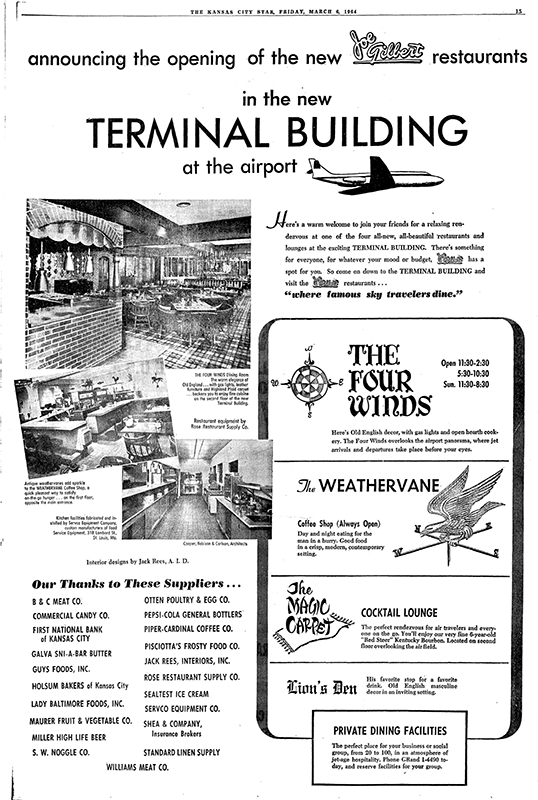 The bustle behind-the-scenes didn’t seem to hinder the relaxed dining experience. The Star described the dining room as having “an atmosphere of considerable charm and cheerfulness,” with “wood paneling, comfortable black leather or shiny red-enameled chairs and a plaid carpet of red, green and yellow.” 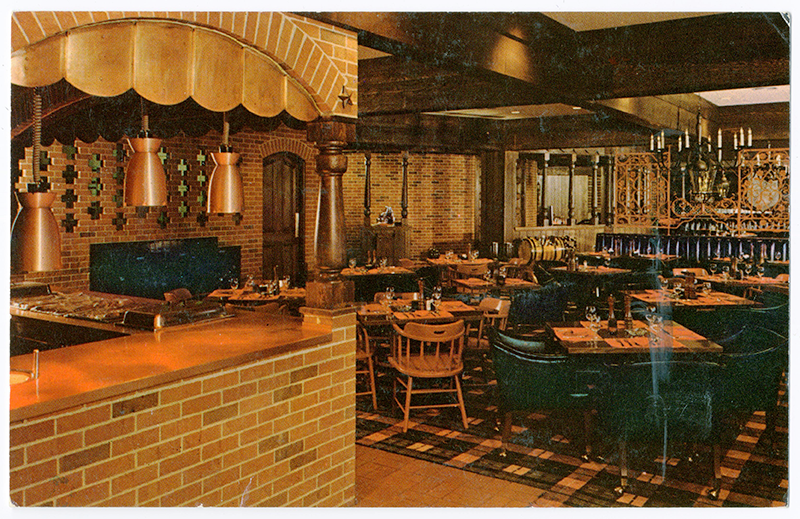 The newspaper went on, “A large antique brass fixture has been mounted at one end of the room, with both electric and gas lights. The outstanding feature, of course, is the view. The restaurant windows look out on the runway of the airport, and some of the excitement and romance of taking off and landing carry into the room.”

The “open hearth cookery” was also a draw for guests, who could watch as their charcoal-broiled steaks were prepared. 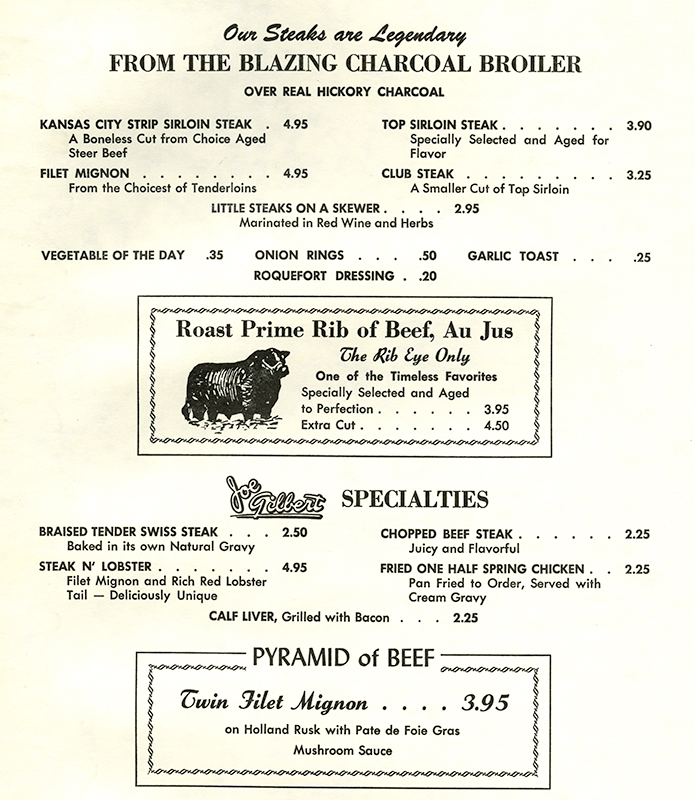 In 1964, it was estimated that only half of Four Winds customers were travelers; the other half were locals looking for a good meal. Diners weary of typical Kansas City beef and potatoes could choose from a variety of more exotic selections on the menu, including Icelandic flounder, lobster tail, and stuffed rainbow trout amandine. Many came for the roast turkey served on Sundays or a slice of Four Winds’ famous cream pie.

Since the Municipal Airport was a stopover for transcontinental flights, locals also came to the restaurant hoping to catch a glimpse of traveling celebrities. Stories of sightings date to the 1940s at the old Milleman & Gilbert restaurant. Legend has it that actress Carole Lombard ate her last meal there before her TWA flight crashed in Nevada. Ernest Hemingway reportedly worked on For Whom the Bell Tolls in a restaurant booth while waiting for a flight in 1939. Local broadcast personality Walt Bodine recalled seeing Bing Crosby and Bob Hope sitting together at the airport concessions.

Eventually, the autographs of several celebrity guests were incorporated into the menu, and Four Winds adopted the slogan, “Where famous sky travelers dine.” 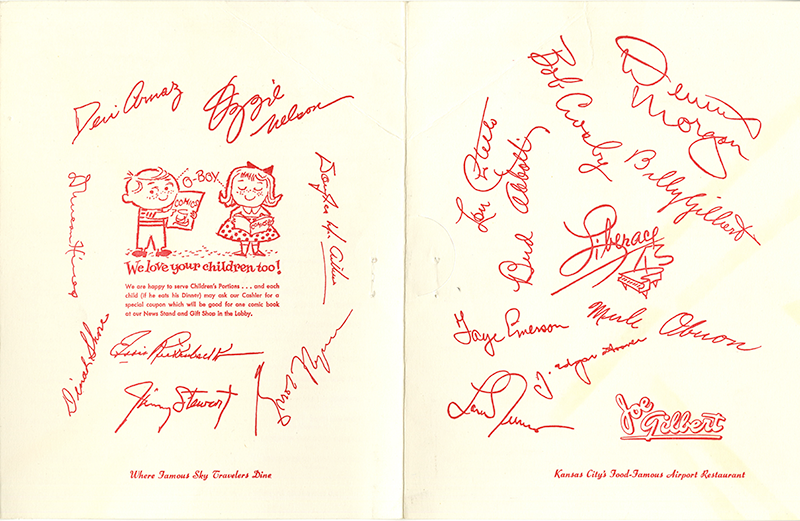 Despite the restaurant’s success, the transfer of airline service from downtown to the new Kansas City International Airport signaled its closing. Joe Gilbert’s company, by then Gilbert-Robinson, Inc., began operating the concessions at the new airport and could no longer justify maintaining The Four Winds. The restaurant closed in 1973, causing many of its loyal customers to lament the end of an era for airport fine dining. 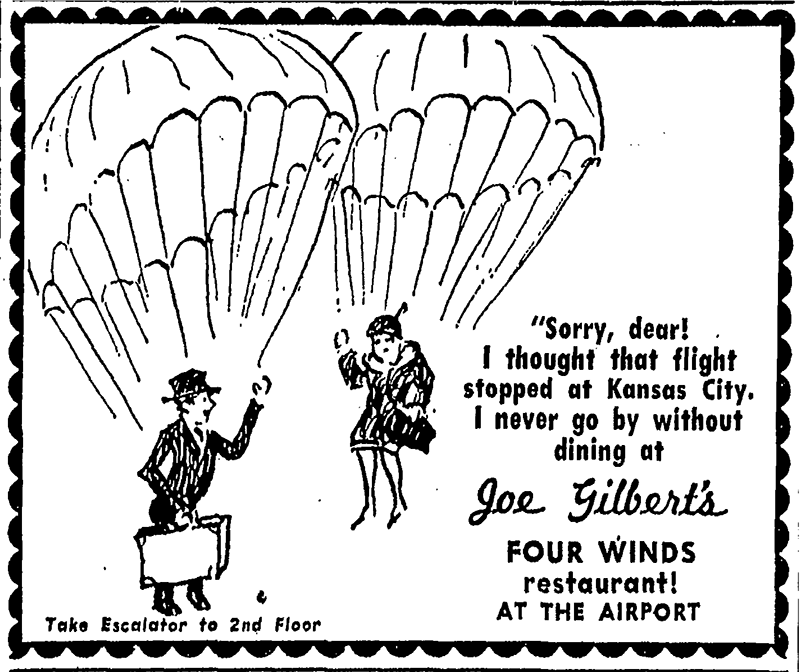 The Gilbert-Robinson business continued to grow, moving beyond airport dining. Its other projects included Top of the Tower, the Inn at the Landing, Annie’s Santa Fe, Plaza III, the Alameda Plaza Hotel restaurants, Bristol Bar & Grill, and Houlihan’s. The company eventually was sold to a conglomerate in 1978. Many of its employees, inspired by the Joe Gilbert ethic, went on to start restaurants of their own.

HOW WE FOUND IT

Information on Joe Gilbert and The Four Winds restaurant was found through searches of newspapers and magazines available in the Missouri Valley Special Collections, including Kansas City Magazine, Kansas Citian, and clippings from The Kansas City Star/Times. The Four Winds menus, designed by commercial artist Steve Lispi, are from the S. Stephen Lispi Collection. Additional images can be found in MVSC’s postcard and photograph collections.