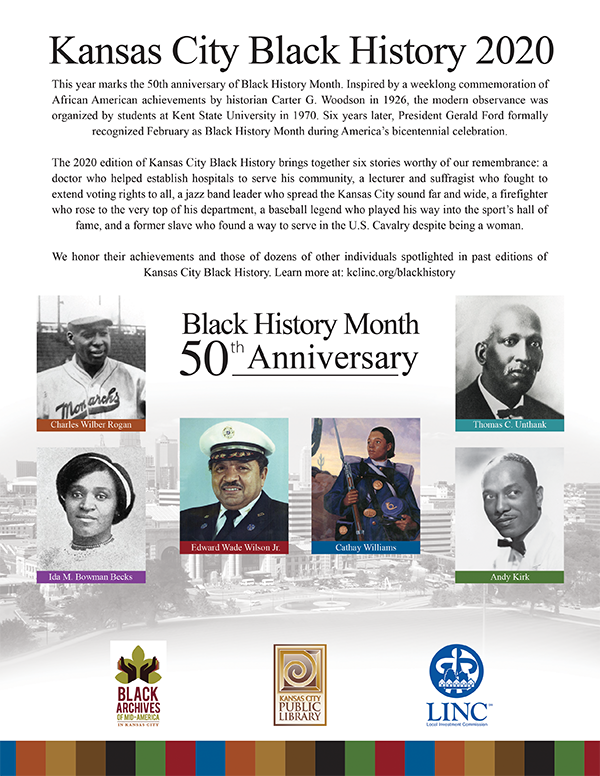 The 2020 edition of Kansas City Black History brings together six stories worthy of our remembrance: a doctor who helped establish hospitals to serve his community, a lecturer and suffragist who fought to extend voting rights to all, a jazz band leader who spread the Kansas City sound far and wide, a firefighter who rose to the very top of his department, a baseball legend who played his way into the sport’s hall of fame, and a former slave who found a way to serve in the U.S. Cavalry despite being a woman.

Read profiles of all of the Black History Month honorees below. A limited number of posters and booklets are available at Kansas City Public Library locations and the Black Archives of Mid-America. Files are also available to download and print for free on LINC's website using these links: 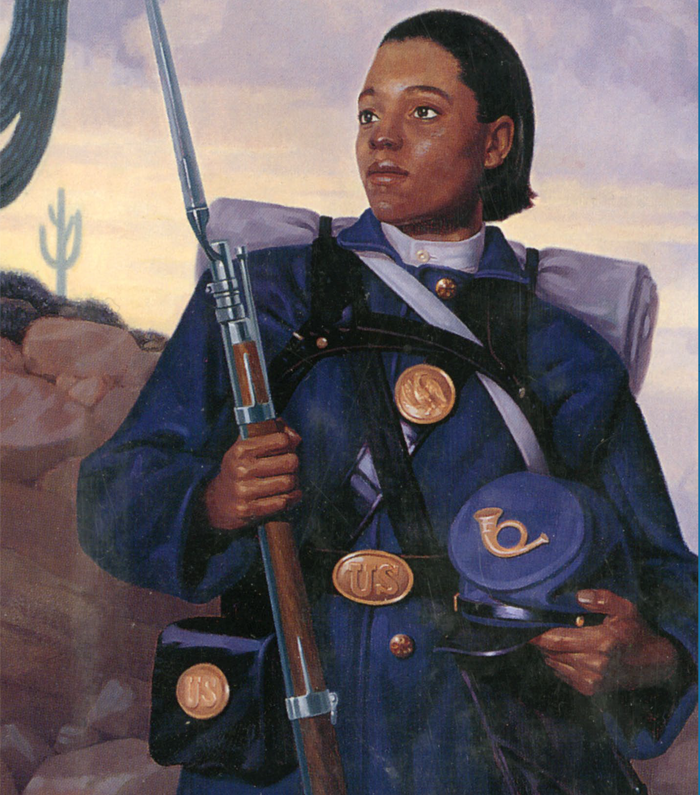 Cathay Williams was the first African American woman to enlist in the U.S. Army — in a time when women were prohibited from serving. She did it, remarkably, by posing as a man. Born into slavery in Independence, Missouri, Williams relocated with her family to a farm outside Jefferson City while she was still a child and did domestic work there until the Civil War. When Union forces took control of the capital city in 1861, area slaves were pressed into military service and Williams worked as an Army laundress and cook. She made her way after the war to St. Louis, had trouble finding employment, and in desperation disguised herself as a man and enlisted in the Army. William Cathay, as she called herself, was assigned to the 38th Infantry Regiment, one of the African American divisions that became known as the Buffalo Soldiers. While never seeing combat, Williams served at Jefferson Barracks outside St. Louis and later at Fort Cummings and Fort Bayard in New Mexico Territory before being honorably discharged in 1868. She applied for a soldier’s pension in 1892, but her application was denied and she died soon afterward. A monument to her legacy as the only female Buffalo Soldier now stands in Leavenworth, Kansas. 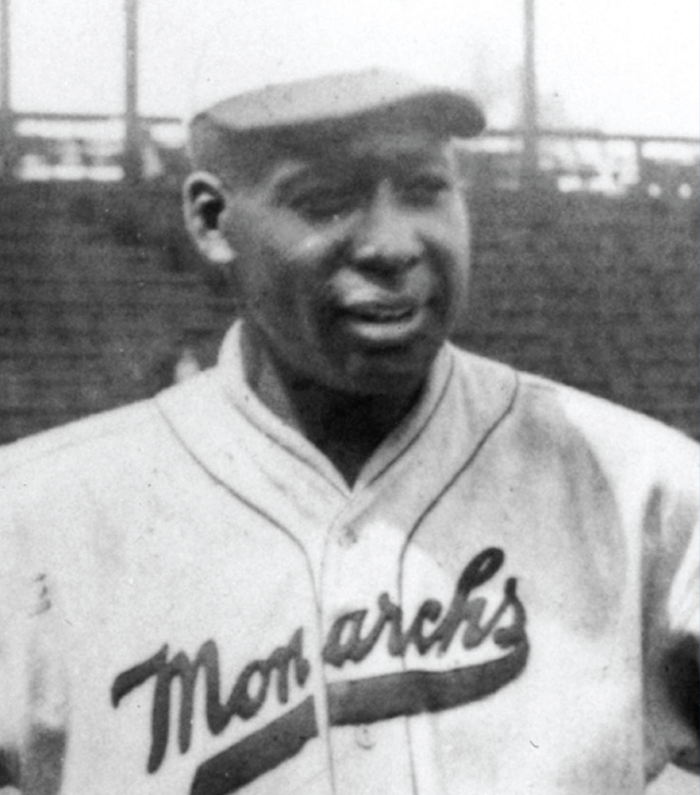 Charles Wilber "Bullet" Rogan was one of the greatest players in the history of the Negro Baseball Leagues, a multifaceted star who earned enshrinement in the Baseball Hall of Fame. Born in Oklahoma City, he moved as boy with his family to Kansas City, Kansas. Rogan attended Sumner High School and played on several local baseball teams before enlisting in the U.S. Army and serving in the Philippines. He was honorably discharged in 1914, reenlisted, and was recruited to play for the all-black 25th Infantry’s powerhouse Wreckers baseball team. Among those he impressed was future New York Yankees manager Casey Stengal, a fellow Kansas Citian who’d played against Rogan and recommended him to the owner of the Kansas City Monarchs of the new Negro National League. Dominant as both a pitcher and hitter, Rogan helped the team win three consecutive league championships (from 1923-25) and a Negro League World Series title (in 1924). He later managed the Monarchs — while continuing to play — and worked as an umpire in the Negro American League. Rogan died in Kansas City in 1964, and was inducted into the Hall of Fame in 1998. 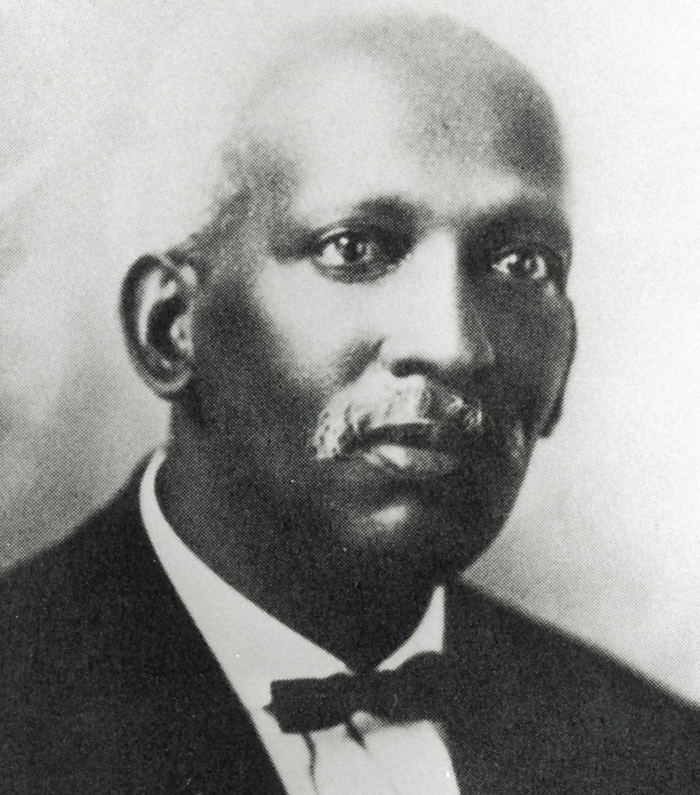 Thomas Unthank rose from a son of former slaves to prominence as a physician and the “father of Kansas City's Negro hospitals.” As a youngster, he focused on education and in 1894 gained admittance to the Howard University School of Medicine in Washington, D.C. Settling after graduation in Kansas City, Unthank joined other African American doctors in establishing Douglass Hospital, Lange Hospital, and the Jackson County Home for Aged Negroes. When a serious flood hit the area in 1903 and an emergency hospital was set up in Convention Hall to help deal with the resulting medical disaster, Unthank was struck by the poor treatment of African Americans there and the need for a city hospital expressly to serve them. Five years later, as General Hospital was set to move into a new facility, he persuaded the city to allow African American patients to be treated in the building left behind. He would twice serve as superintendent of General Hospital No. 2, as it came to be known. After decades of dedication to Kansas City’s medical community, Unthank passed away in 1932 at age 66. A bust was placed in his honor in front of General Hospital No. 2, which was merged late in 1957 with the all-white General Hospital No. 1. 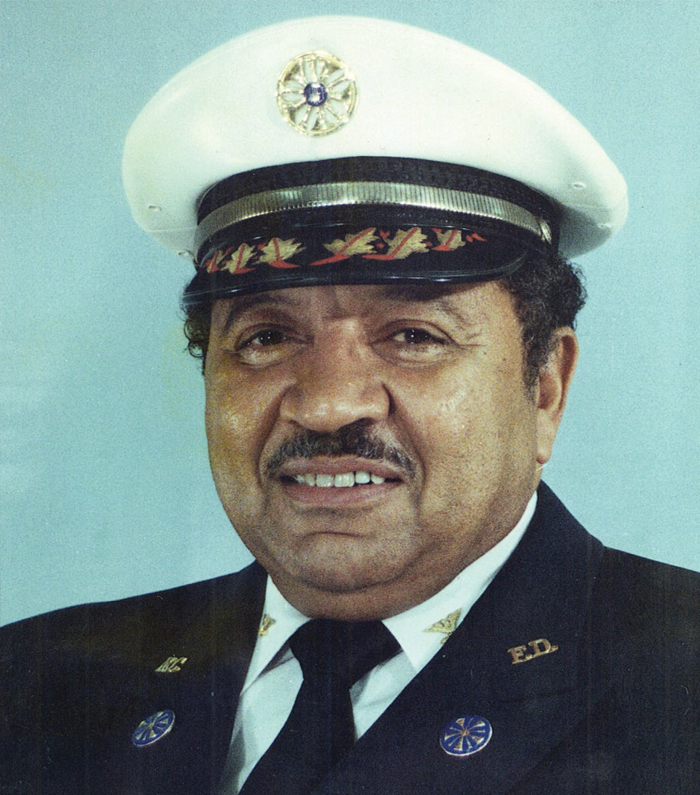 More than a century after the Kansas City Fire Department was established, Edward Wade Wilson became its first African American chief, capping a trailblazing career of nearly 46 years. Born in Parsons, Kansas, Wilson moved with his family to Kansas City during his elementary school years and attended R.T. Coles and Lincoln high schools. After graduating in 1943, he joined the fire department as a cadet. He left briefly — to fight with the U.S. Army in Germany during World War II — and returned to firefighting, rising from fire motor operator to captain by the time he was 23. No one that young had previously achieved that rank. Wilson became a battalion chief in 1960, a deputy chief in 1975, and set another, more important precedent with his appointment as chief in 1980. His tenure encompassed the Hyatt Regency skywalk collapse in 1981 and deaths of six firemen in a construction site explosion in 1988. Wilson retired from the department in 1989, going on to work as an insurance investigator and for The Kansas City Star. He passed away in October 2019. 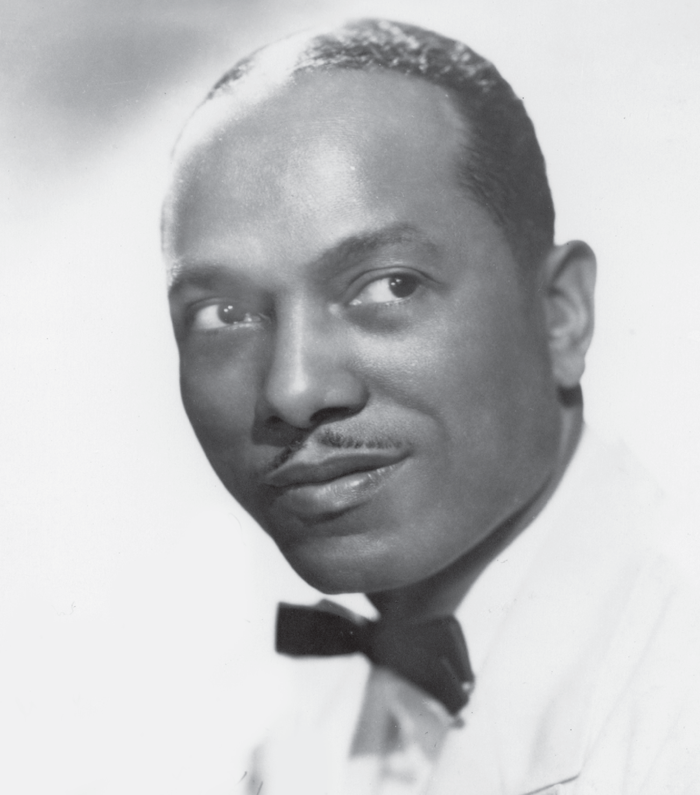 As a prominent big band leader, Andy Kirk popularized the Kansas City sound nationwide. Not a virtuoso musician or charismatic showman like his contemporaries Bennie Moten and Count Basie, the unassuming Kirk excelled at arranging music, organizing musicians, and conducting. Growing up in Denver, he did not play an instrument until his late teens. He started his career in 1919, performing on alto saxophone and tuba in George Morrison’s band, and by 1925 had moved on to Terrance Holder’s band, the Dark Clouds of Joy. When Holder left four years later, the band members elected Kirk as their new leader. He renamed the group the Twelve Clouds of Joy and moved it to Kansas City, playing regular shows at the Pla-Mor Ballroom and Paseo Hall. Under his leadership, the Clouds went on to tour the United States through the 1930s and 1940s. “For us,” Kirk wrote, “Kansas City was like the hub of a wheel with spokes that extended in all directions.” He dissolved the band in 1948 and went on to careers in real estate and as an administrator for musician’s unions in New York. 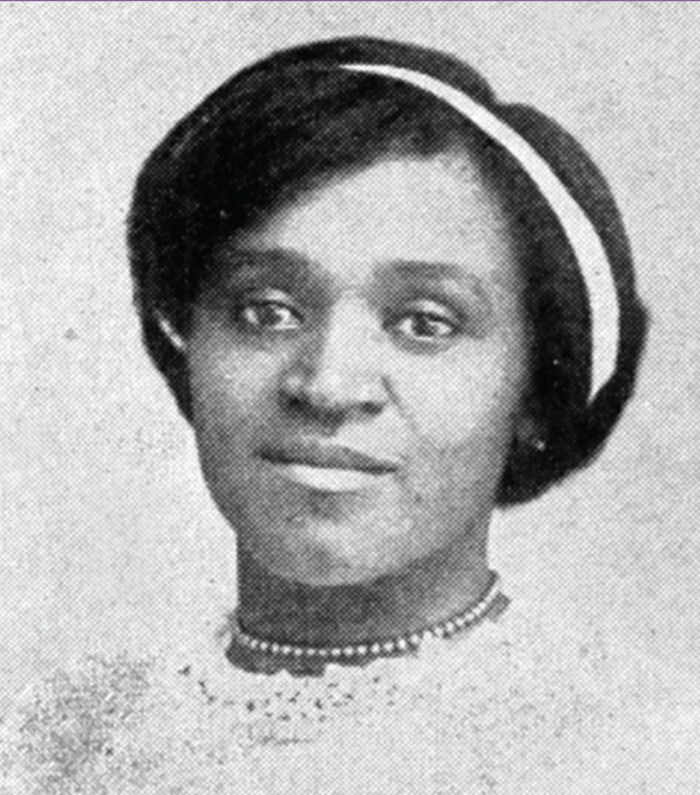 As a renowned lecturer, clubwoman, and suffragist, Ida Bowman Becks led the local African American community in the pursuit of equality. Becks was born in Armstrong, Missouri, and showed promise as a student at Lincoln School, where she graduated as class valedictorian in 1899. She then attended the Chicago School of Elocution, using that training to gain national attention as a public speaker. In 1908, she moved to Kansas City and worked as a field representative for the Florence Crittenton Home and the Foreign Mission Board of the National Baptist Convention. Becks became active in several charities and women’s clubs, and she was instrumental in the establishment of the Yates YWCA and the Kansas City Urban League. Her speeches in favor of women’s suffrage, given at numerous churches and clubs, were praised for their eloquence. Audience members described Becks as fearless and persuasive, and her participation in public debates furthered her oratorical reputation. She went on to become a delegate to the 1921 NAACP convention in Detroit, a board member of Wheatley-Provident Hospital, and organizer and chair of the Kansas City chapter of the Negro Women’s National Republican League.