Start your engines! Classic sports cars and performing arts collide in this week’s installment of What’s Your KCQ?, a partnership between The Star and the Kansas City Public Library. This time we explore the Folly Classic Vintage Grand Prix, a short-lived vintage auto race designed to benefit the Folly Theater during the 1980s.

Some readers may remember classic Ferraris, Jaguars, Maseratis, Porsches, and Alfa Romeos circling Liberty Memorial in this high-speed road race, all to help a restored theater repay its debts. But how did this unusual fundraiser come to be? 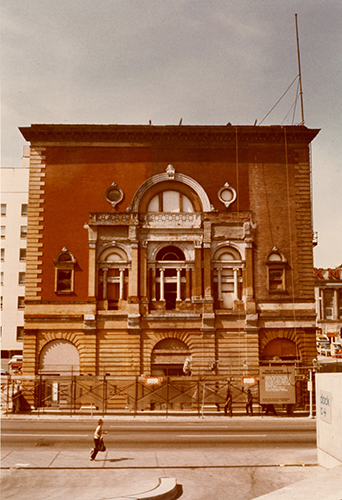 In the early 1980s, the newly reopened Folly Theater found itself in desperate need of financial support. The Folly, which originated as the Standard Theater in 1900, had assumed various identities over the decades—from a vaudeville, burlesque, and Shakespearean playhouse to an X-rated movie theater—before closing in 1973. The building was slated for demolition until Joan Kent Dillon, a historic preservation activist, led a campaign that resulted in its placement on the National Register of Historic Places.

After a $4.4 million restoration, the Folly Theater reopened in 1981. By 1983, however, it still owed around $1.5 million in loans and outstanding contractors’ fees. Low ticket and rental prices also led to cash flow problems, prompting staff and budget cuts. The Folly Council, a volunteer organization, brainstormed fundraising campaigns with member Jane Bruening at the helm. What began as an idea involving Paul Newman's salad dressing and classic cars eventually evolved into something a little different—a vintage auto race.

Plans for the Folly Classic Vintage Grand Prix quickly began with hopes of it becoming an annual event to benefit the theater. Bruening directed the project. The proposed 1.5-mile course would circle Liberty Memorial, and the Kansas City chapter of the Sports Car Club of America (SCCA) would sanction the race.

Having gained the support of the city—including a temporary removal of the 35 mph speed limit—Bruening would have succeeded in holding the Grand Prix in July 1983 if not for one issue. The SCCA required at least 1,300 cement barriers along the track. The Folly could not acquire them in time, and the race was postponed to the following year. 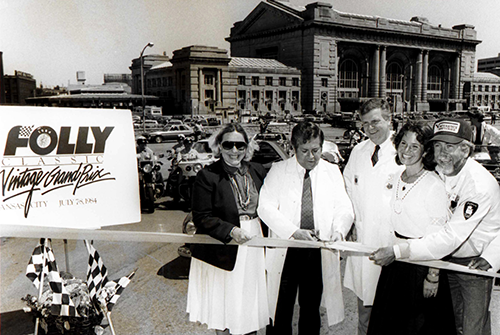 The first Folly Classic Vintage Grand Prix was scheduled for July 7-8, 1984. It would be the grand finale of the Kansas City Spirit Festival, a nine-day civic celebration. The Folly advertised the Grand Prix as “A Monte Carlo-style race on the streets of Kansas City … A first ever in the Midwest” and promised spectators a variety of exotic automobiles.

The race course would start and finish in front of Union Station and run along Pershing Road, Kessler Road, and Main Street. The SCCA’s Peter Talbot, who designed the course, chose the location to avoid disrupting downtown businesses. Race planners even ran a noise test to ensure the cars would not disturb patients at the nearby St. Mary’s Hospital. 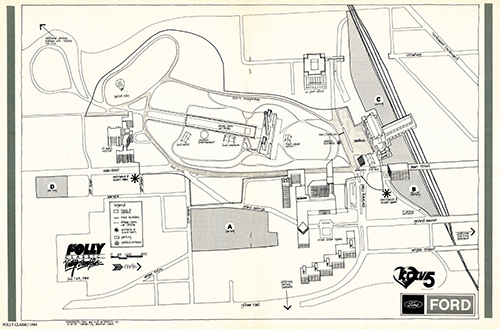 Safety was paramount. Cars entering the race, all built before 1965, were required to meet the strict standards of the Historic Motor Sports Association. According to the suburban newspaper The Town Squire, race authorities nixed an early idea to plot the course near the Folly at 12th and Central, as various obstacles would make the race “dangerous and unacceptable.” The Grand Prix would also be strictly amateur, with no cash prizes to incentivize overly aggressive driving.

Around 70 drivers came from across the country to participate. Drivers were split into five groups based on their car’s specifications and model year, which ranged from 1927 to 1965. Older cars with engines smaller than 2,000 cc, such as a 1927 Bugatti T37A, were placed in Group 1, while Group 5 included those akin to the 1956 Ferrari Testa Rossa, which had an engine capacity of more than 2,900 cc. Group 5 cars could reach up to 130 mph on straightaways. 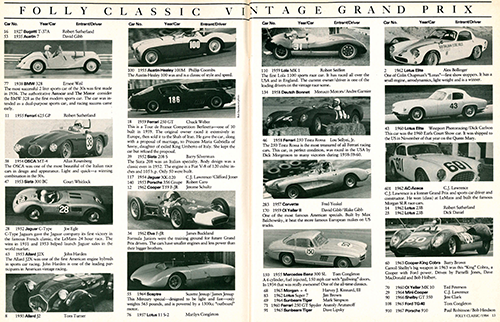 Some of the participants in the 1984 Folly Classic Vintage Grand Prix. | Kansas City Public Library.

Opening day drew a crowd of over 10,000. In addition to practice sessions, time trials, and races, the two-day program also included an auto show and parade. Patrons and sponsors sat in a specially built grandstand, while most spectators paid $10 to watch from the slopes of Liberty Memorial Mall in Penn Valley Park.

The Town Squire reported: “Local favorites in the event include Joe Egle and his 1952 Jaguar C that was built strictly for the Le Mans, in France, Marilyn Congleton who calls herself the ‘Galloping Grandma’ in her Luscious Lotus Eleven, and her husband Tom who drives a historic Ford GT 40.” 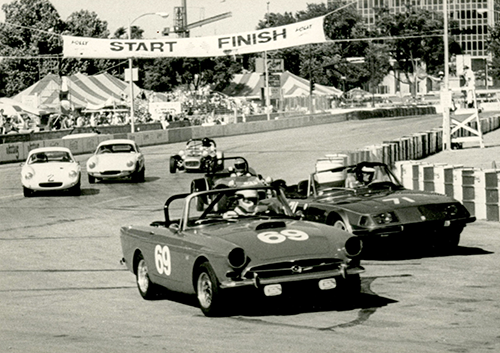 The Grand Prix went smoothly outside of a few weather and technical delays. One minor accident occurred when former world champion Phil Hill nudged another car in the Group 5 race, damaging the headlight of his Ferrari. Hill, who had traveled in from Santa Monica, California, proceeded to win the race.

Kansas Citian Craig Sutherland placed first in Group 4, while winners of other groups hailed from Illinois, Oklahoma, and Connecticut. Joe Egle celebrated by drinking champagne out of his second-place trophy. Overall, the event met with enthusiasm from the drivers, who enjoyed the street course and appreciated Kansas City as a central location. 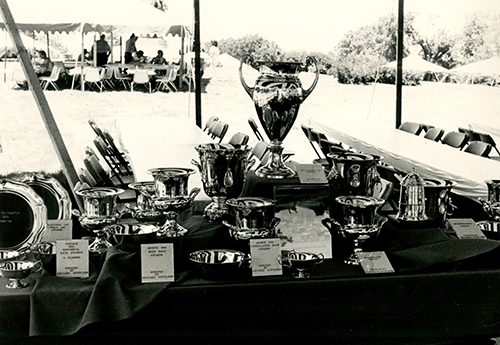 Despite the positive response, the Grand Prix was not a financial success. Attendance was around 34,000 rather than the projected 50,000, and ticket sales couldn’t cover the cost of the event. A percentage of the proceeds were earmarked for Kansas City Parks and Recreation, which had partnered with the Folly to charge admission at Penn Valley Park. While Bruening reported that the 1984 race would not be making any money for the theater, participants expected it to gain traction over the next few years. 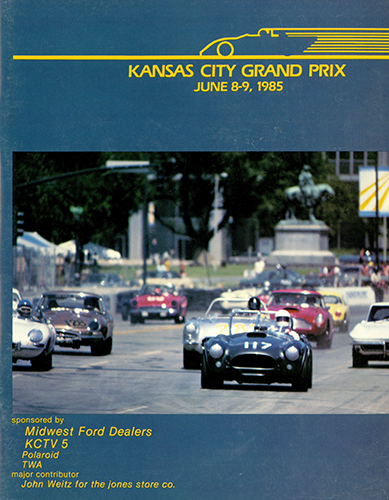 Unfortunately for the Folly, the race only lasted one more year. The 1985 event, renamed The Kansas City Grand Prix, took place in June and was more ambitious than the first. In addition to roughly 100 vintage drivers, it included over 40 professional drivers and was to be the first race in the 1985 Pro Sports 2000 championships. Races ranged from 10 to 40 laps around the same course, and two pedestrian bridges costing an estimated $92,000 were built over the street. 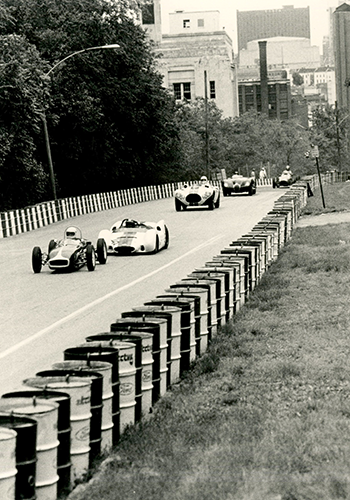 Despite efforts to continue the tradition in 1986, the Grand Prix was canceled due to a major increase in insurance fees. A required $20 million policy became too costly for the fundraiser. Meanwhile, the Folly Theater had successfully negotiated with several banks to forgive the majority of its $1.35 million loan, due in May of that year. The theater survived, and the Kansas City Grand Prix became a fond, if distant, memory. 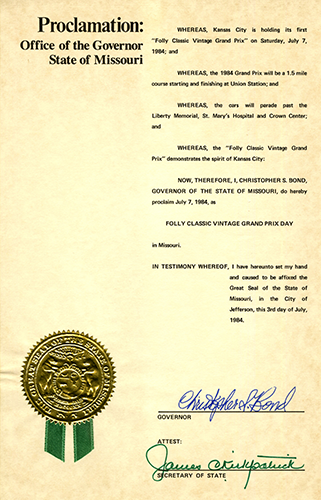