Flipping recently through a copy of the almanac On This Day in America, a Library staff member saw that a Kansas City newspaper is supposed to have made the first-ever reference to followers of baseball as “fans” a little more than 130 years ago – in March 1889.

She wondered: Is there merit to the claim?

With Major League Baseball’s opening day upon us and Royals fans ready to cheer on their boys in blue, it seems a perfect time to investigate. (By the way, if you have questions of your own, you can submit them to our What’s Your KC Q series in partnership with The Kansas City Star).

In proclaiming Kansas City as home of the game’s original “fans,” the almanac points to an entry in the “Kansas Times and Star” on March 26, 1889. We can assume it means The Kansas City Star or The Times. A search of the two newspapers that day reveals no specific use of the term in a sports context, though baseball was reported. 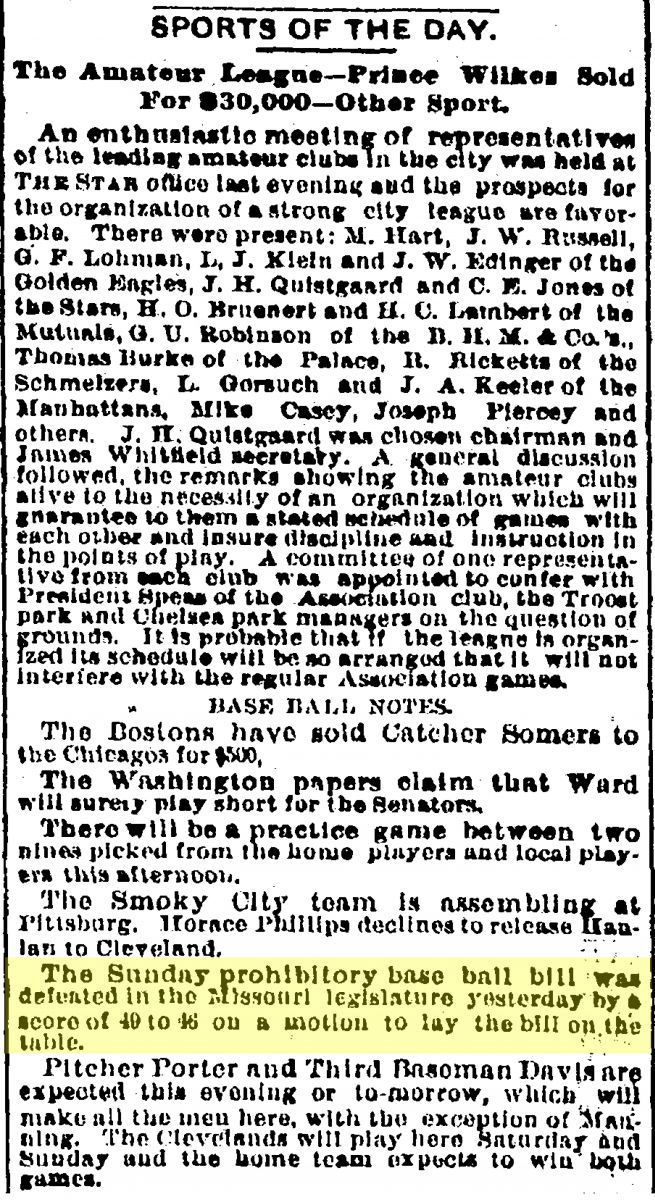 The major announcement was a meeting of representatives of the city’s amateur baseball clubs that took place the previous evening at The Star’s office building. The purpose was to organize a city league that would guarantee a schedule of games and “ensure discipline and instruction in the points of play.” In that era, dozens of amateur teams played in city leagues and traveled to neighboring cities to challenge their best “nines.” Many were sponsored by local businesses and athletic clubs and went by such names as the Schmelzers, Golden Eagles, Kansas City Stars, and Manhattans.

Also of interest was a blurb under “Base Ball Notes” that the Missouri legislature had voted down a measure to prohibit the playing of baseball on Sundays, surely to the chagrin of churchgoers throughout the state. 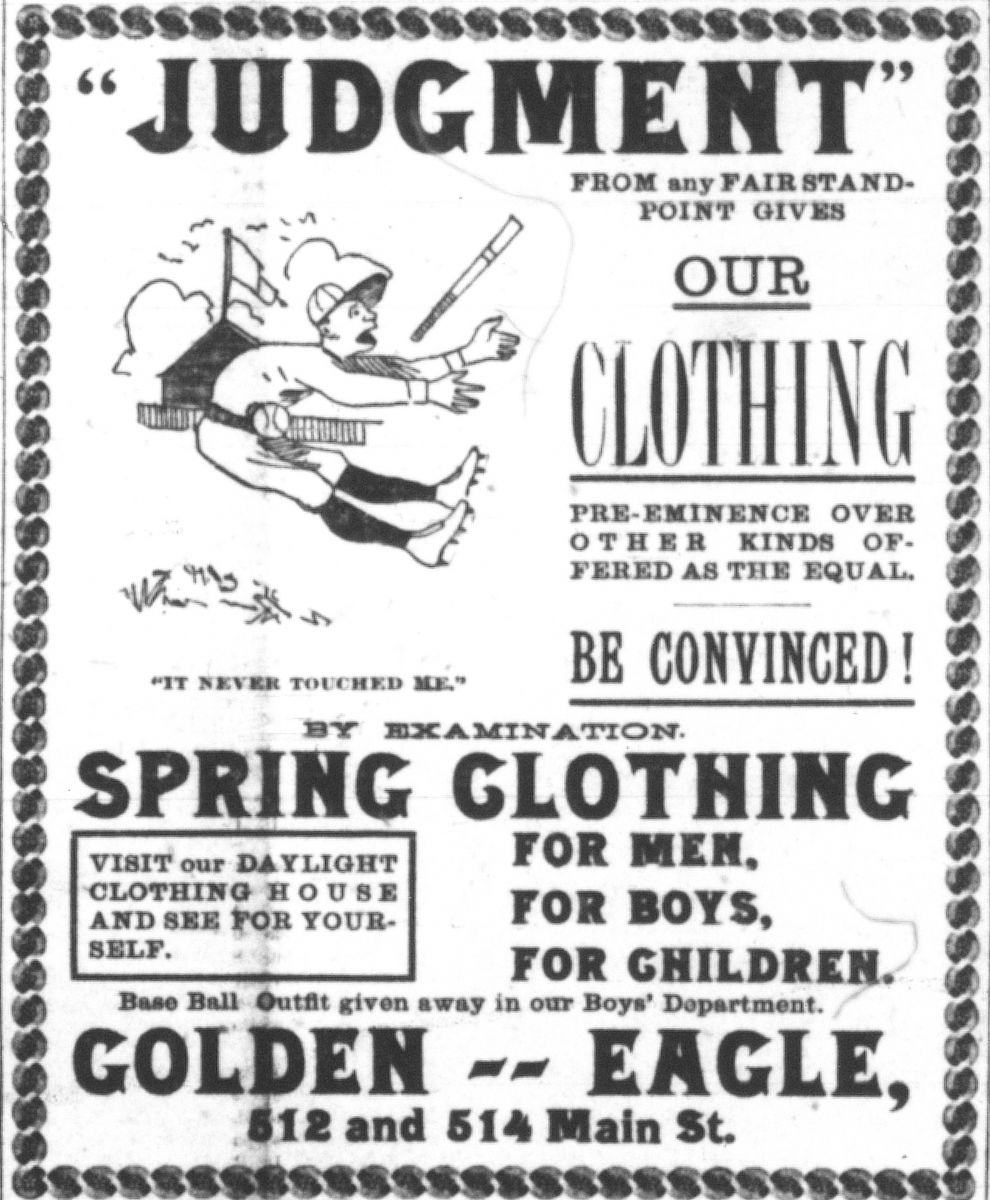 Golden Eagle ad, Kansas City Times, March 27, 1889. The Golden Eagle Clothing House was an early supporter of local baseball, sponsoring a Golden Eagles team that was dominant for many years in city leagues.

Another story in The Times – published four years earlier – is cited in Merriam Webster’s entry on the origin of "fan" as a shortened form of fanatical:

“In English, fan made an early appearance in the late 17th century only to disappear for two centuries, resurfacing in the late 19th century. In this later period of use, it often referred to the devoted observers of, or participants in, a sport. An 1885 article from The Kansas City Times, for example, contains the line “The base ball ‘fans’ of the ploice [sic] force and fire department engage in a ball game.”

The dictionary doesn’t claim that “fan” was first introduced or popularized by The Star/Times, but it’s noteworthy that another source mentions the Kansas City newspaper. 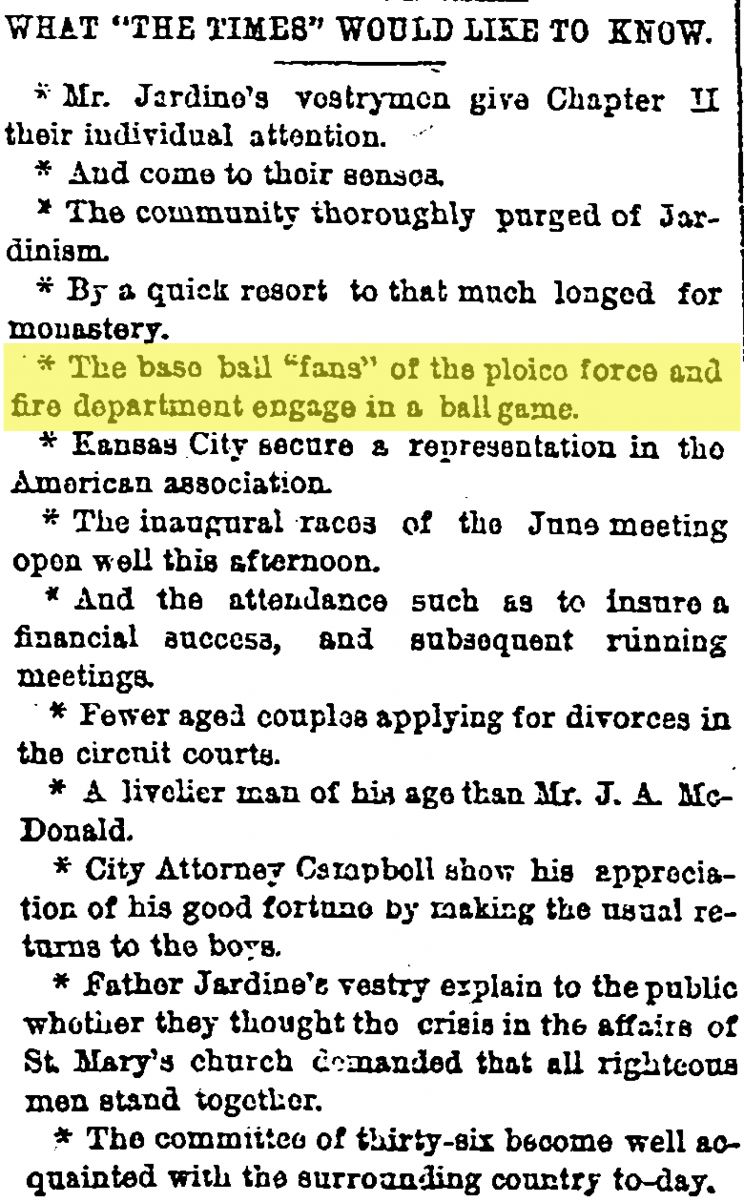 An early mention of baseball “fans” in the June 16, 1885 edition of The Kansas City Times.

Before they were fans: ‘Cranks, fiends, and rooters’

Baseball in the 1880s was a raucous game that in turn attracted its share of rowdy spectators. Drinking, gambling and cursing were prevalent, and umpiring was a hazard, especially if calls went against the home team. Baseball – albeit growing in popularity – suffered from a low-class image. Newspaper writers used terms such as “cranks,” “fiends” and “rooters” to describe baseball enthusiasts. The now prevalent “fans” was not commonly used until the 1900s. 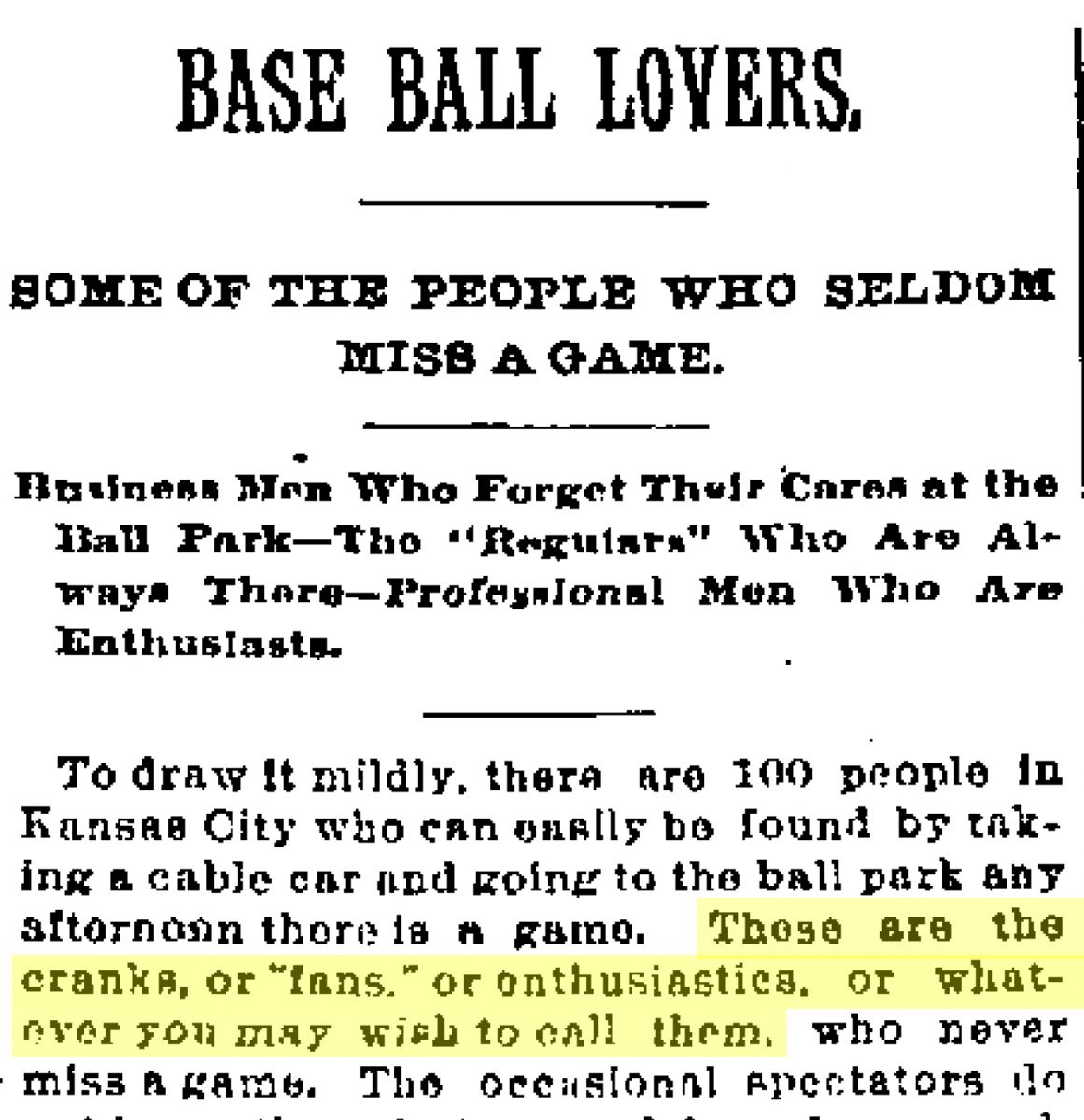 Chicago Herald article published in the June 21, 1887, Kansas City Times. The presence of women at male-dominated baseball games was such an uncommon occurrence that it warranted coverage in the newspapers.

Many baseball historians credit Timothy Paul “Ted” Sullivan with coining the term “fan.” Coincidentally, he, too, has a tie to Kansas City.

Sullivan, an Irish immigrant, was an early baseball player, manager, league organizer and scout during the sport’s infancy in the decades after the Civil War. He formed the Northeast League in Iowa in 1879 and managed the Dubuque Rabbits to a league championship the same year.  In 1883, he was recruited to manage the St. Louis Browns of the newly formed American Association professional league.

In his 1903 book Humorous Stories of the Ball Field: A Complete History of the Game and Its Exponents, Sullivan recounts an incident with an unruly man who confronted him at the Browns’ headquarters. The man purported to know “every player in the country with a record of 90 in the shade and 100 in the sun,” and pestered Sullivan with “opinions on all matters pertaining to the ball” until Sullivan called on some of his players to have him removed.

When Sullivan asked, “What name could you apply to such a fiend as that,” his star first baseman and protégé, Charlie Comiskey (the eventual founding owner of the Chicago White Sox and namesake of Comiskey Park) proclaimed, “He is a fanatic.”

Sullivan responded, "I will abbreviate that word and call him a 'fan.’” Whenever the man was seen around headquarters after that, team members would say "the fan" was around again.

If you’re skeptical of Sullivan’s account, you are not alone. He was known as a legendary storyteller who spun several different versions of that tale with one detail unchanged: It was he who first came up with the term. It has also been suggested that “fan” was first used in a conversation between Sullivan and St. Louis Browns owner Chris Von der Ahe.

What is not in dispute is Sullivan’s connection with professional baseball in Kansas City. 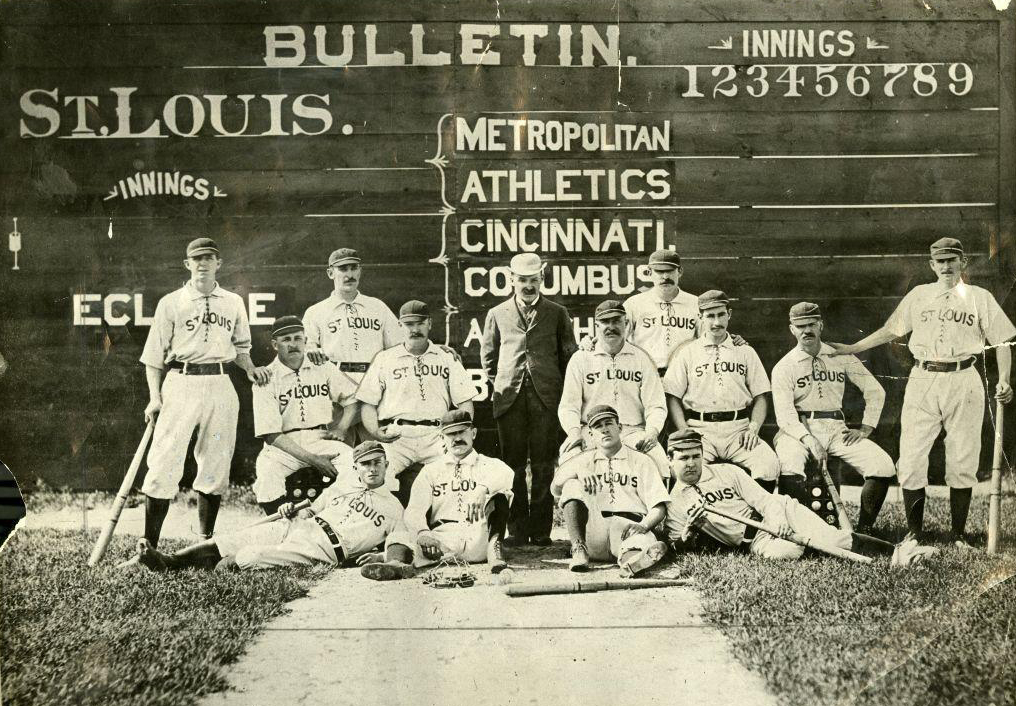 Sullivan left the Browns in the middle of the 1883 season after a dispute with Von der Ahe, and took over as manager the St. Louis Maroons of the upstart Union Association.

That eight-team league formed in 1884 as a rival to the National League and American Association. Kansas City joined 25 games into its inaugural season when the Altoona, Pennsylvania, franchise folded due to financial difficulties. The Unions, as they were known, became Kansas City’s first professional baseball team. 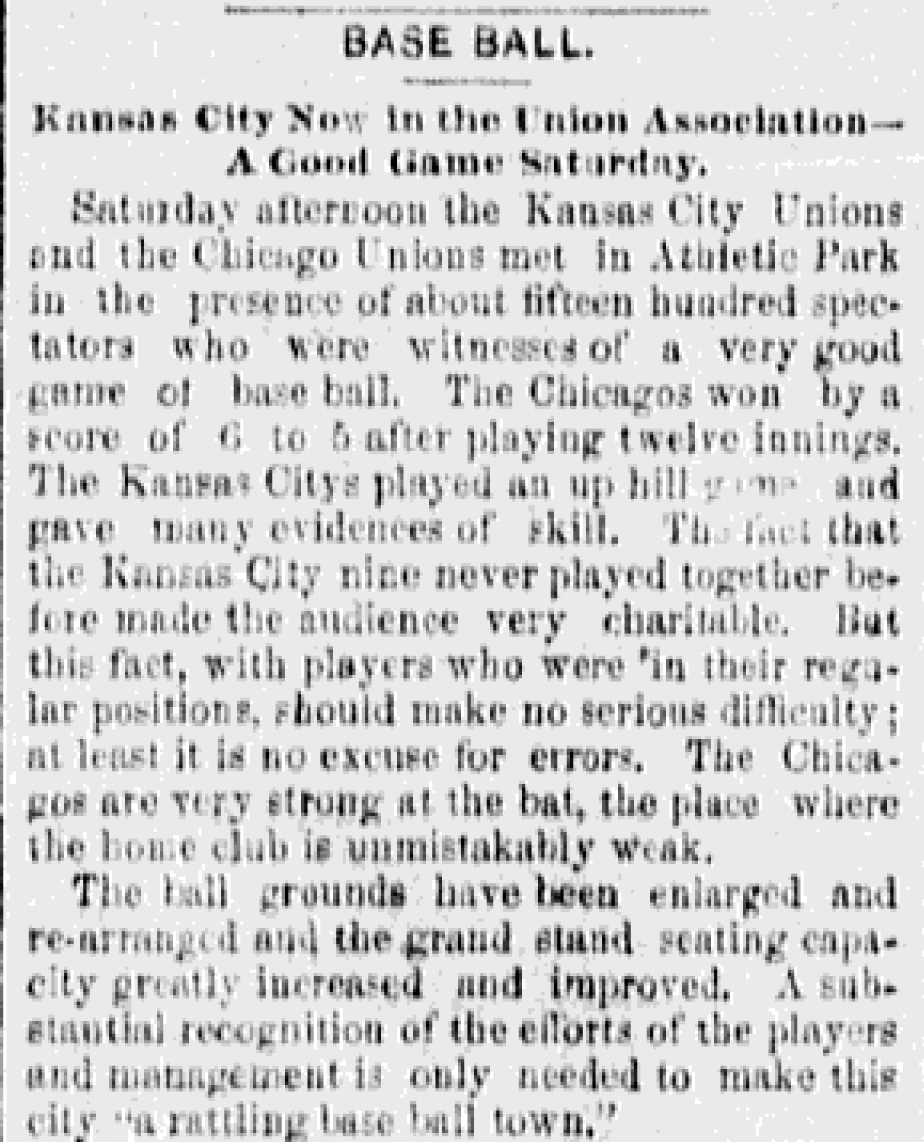 The Kansas City Evening Star, June 9, 1884. An estimated 1,500 spectators were in attendance for Kansas City’s first professional baseball game against the Chicago Unions, a 6-5 loss.

On the other side of the state, Ted Sullivan’s Maroons started the season on a 21-game winning streak. But another fallout with his team owner led to him joining the Kansas City Unions midseason as manager and partial owner (he even played in three games). The Kansas City club finished at the bottom of the standings with a 16-63 record, while Sullivan’s former team in St. Louis won the league title.

The Union Association disbanded at the end of the season when not enough owners showed interest in keeping it going.

Determined to keep baseball in Kansas City, Sullivan and other team owners reached out to other cities to form a new league. The following year, the Western League was founded with Sullivan managing the Kansas City team (nicknamed the Cowboys).

The season got off to a promising start on April 18, 1885, with Kansas City beating Omaha 12-4. Despite some early success, the Western League proved to be unsustainable and the teams disbanded before a full season was played.

Sullivan would leave Kansas City to take a manager’s position in Memphis in the newly established Southern League. He remained in active baseball as a manager, scout, and promotor until his death in 1929.

Professional baseball survived in Kansas City, with fans supporting teams such as the Cowboys, Packers, Blues, Monarchs, Athletics, and now the independent league T-Bones and our beloved Royals.

And the call is …

The term “fan” has endured since it was first used in a baseball context in the 1880s. It has since become part of the American lexicon and evolved to describe devotees and enthusiasts beyond the world of sports.

However, the claim that the term was first used in a March 26, 1889, Kansas City newspaper article is unfounded. One can search sports sections of local papers prior to 1889 and find numerous mentions of “base ball fans.”

Nonetheless, while Sullivan’s story of how he coined the word in 1883 was published 20 years after the fact, many baseball historians support his claim and point to him as the originator. 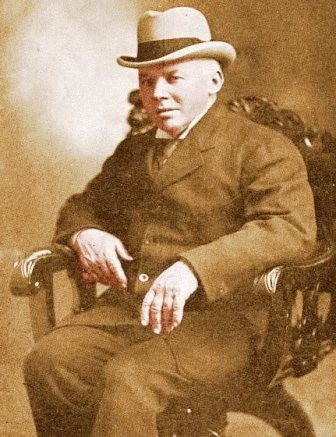 More information about Kansas City’s early baseball history can be found in the Library’s Missouri Valley Special Collections. In addition to searching digital and print newspaper archives, several  books were consulted in researching this question:  Unions to Royals: The Story of Professional Baseball in Kansas City, The 1884 Unions:  A History of Kansas City’s First Major League Baseball Team, From Dust to Dust: An Account of the 1885 Western League, and Summer of Beer and Whiskey:  How  Brewers, Barkeeps,  Rowdies, Immigrants, and a Wild Pennant Fight Made Baseball Great Again.