In this week’s installment of What’s Your KC Q?, Kansas City Public Library staff members respond to a question from Chet Trutzel. He asked if there was once an amusement park located along Woodland Avenue near Brush Creek.

Conceived as a ploy to bring customers to visit the Heim Brewing Company in 1899, the original Electric Park at Chestnut and Guinotte streets grew into an attraction in its own right. Each night, the 100,000 lights that gave the park its name illuminated a roller coaster, scenic railway, carousel, skating rink, swimming pool, bowling alley, alligator farm, dime museum, theaters, dance pavilions, bandstand, penny arcade, shooting gallery, flower beds, lake, and rental boats. Most alluring were the nightly performances of costumed young women who danced to a colorful electric light show on a platform in a large fountain in the center of the lake. Sometimes known as Kansas City's Coney Island, it served as the city's greatest amusement park for nearly two decades. 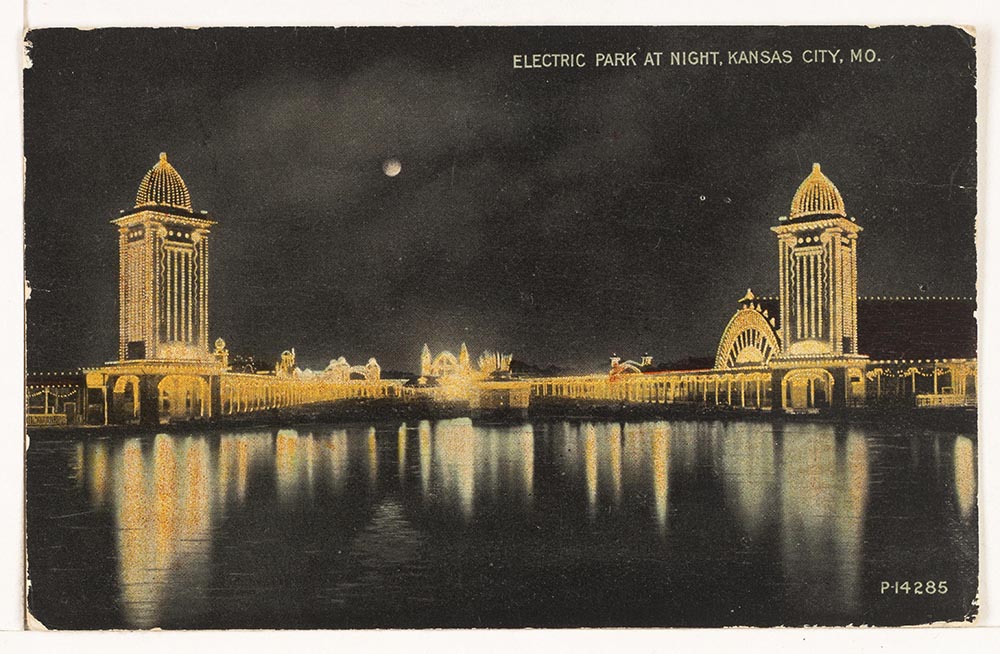 Both that park and a second one – also called Electric Park – were built by brothers Joseph, Ferdinand, and Michael Heim, owners of the Heim Brewing Company. As brewers, they followed in the footsteps of their father Ferdinand Sr. The elder Heim had emigrated in 1854 from Austria to the United States, where he operated a small brewery in Manchester, Missouri, from 1857 to 1862, and a larger one in East St. Louis, Illinois, from 1870 to 1889. As an expansion of this business in 1884, the father and sons jointly purchased the Star Ale Brewery in the East Bottoms of Kansas City, specializing in the brewing of German lager beer. 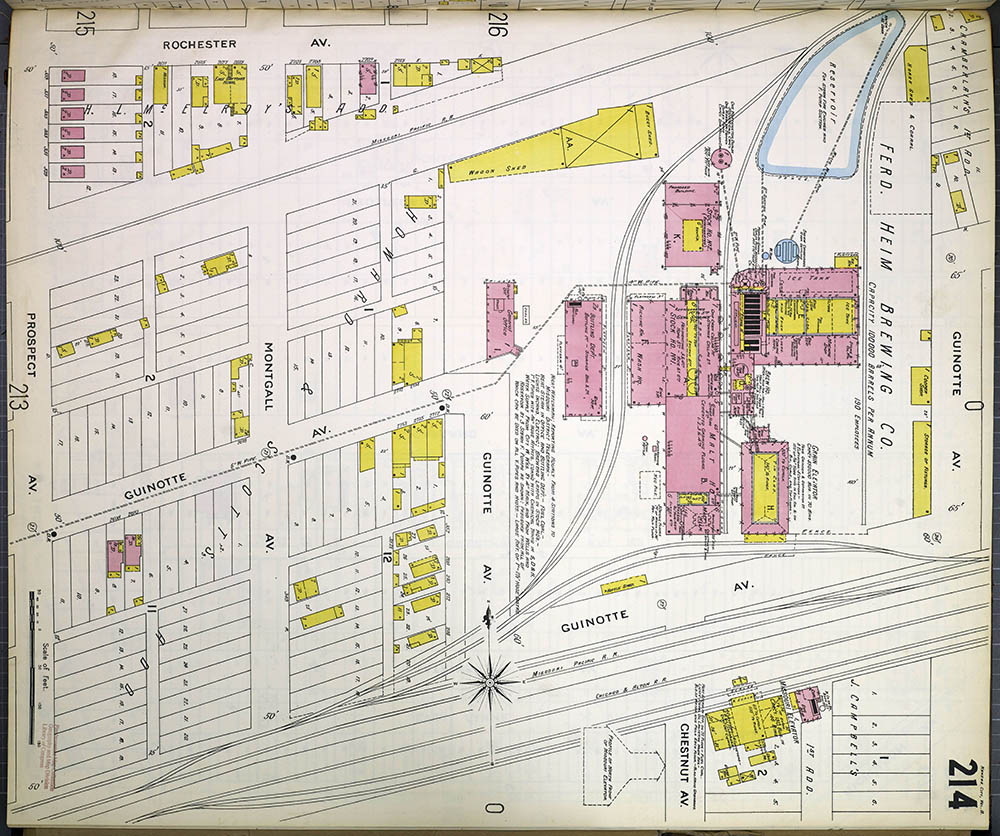 The three brothers quickly built the Heim Brewing Company into the largest-capacity pre-prohibition brewery in Kansas City. Beyond their success in beer making, the Heims took an interest in technological novelties. They were the first in Kansas City to open a telephone exchange and operate a 25-horsepower steam engine. They designed the original vertical top-loading icebox. Ferdinand Jr. was the first Kansas City resident who drove an automobile with a back seat. 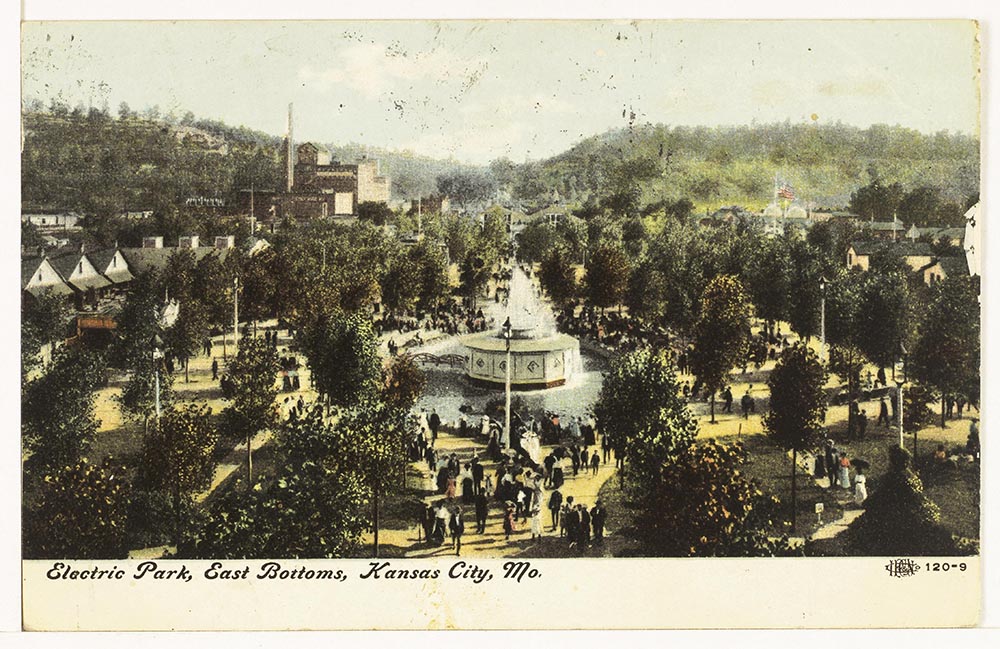 One of their riskiest and most important ventures was the construction of a $96,000 streetcar line from the Market Square that would carry visitors directly to the brewery to buy fresh beer. At first, this very expensive investment was a dismal failure. Instead of abandoning the venture, the brothers decided to open Electric Park to attract streetcar riders and perhaps visitors to the nearby brewery. The Heims' streetcar line soon carried droves of passengers to the amusement park, allowing the family to sell the line for $250,000. 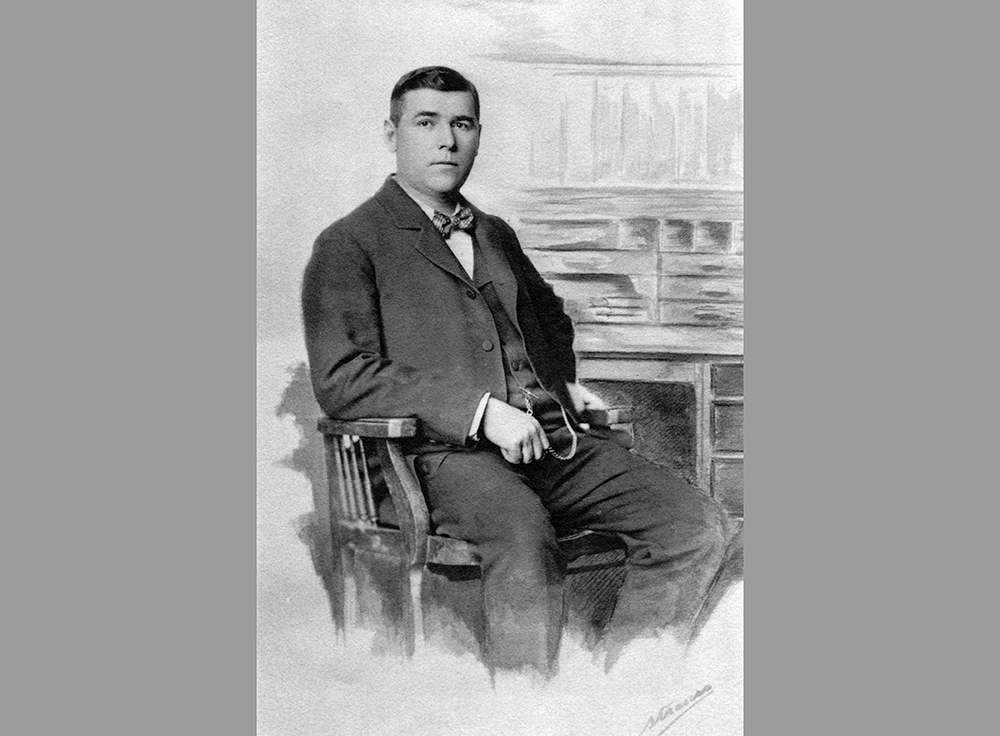 Portrait of Ferdinand Heim, one of the three brothers who built Electric Park, 1907.

In addition to a roller coaster and other rides, fountains, gardens, a dance pavilion, and a vaudeville theater with seating for 2,800, Electric Park provided a giant, German-style beer garden. A pipeline carried beer from the nearby Heim brewery directly into the garden. The arrangement was perfect for business because the still-novel electric lighting provided an illuminated experience after dark, when thousands of day workers and their families wanted to leave home to relax and play. In short, it was the most popular working-class entertainment venue available in Kansas City. 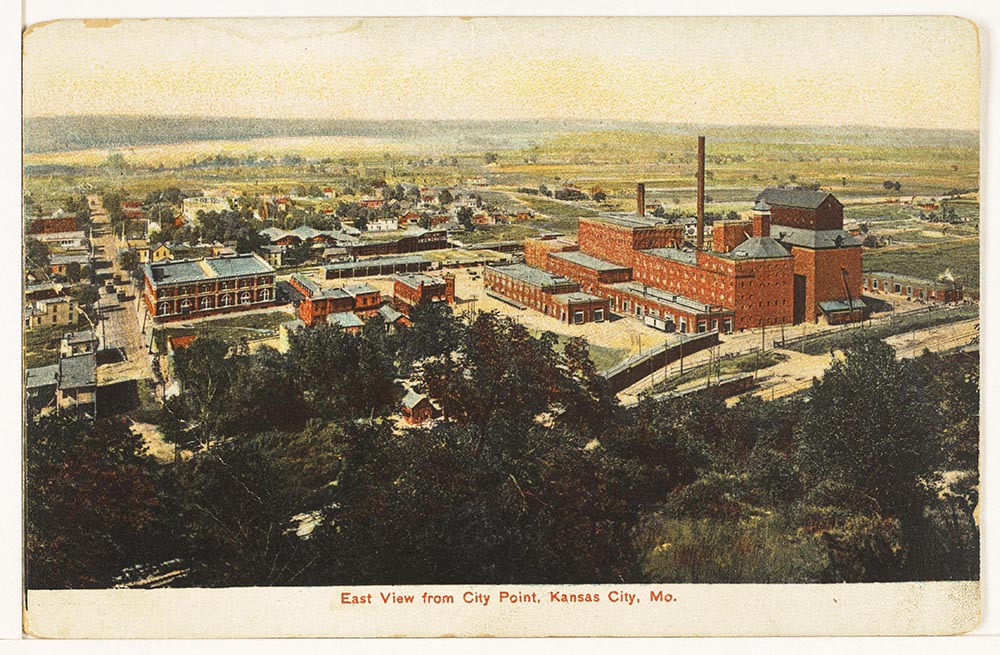 Postcard showing the Heim Brewery in the East Bottoms, 1907.

In the early 1900s, the city was expanding toward the south and the Heim brothers determined that Electric Park should follow. They picked a location at 47th and The Paseo, and built a larger, 27-acre Electric Park there. The old park closed, and the new one opened May 19, 1907, with a boisterous crowd of 53,000. Despite the Heim brothers' close involvement, no beer was available at the second park: a city ordinance now prohibited its sale there. Nonetheless, the park thrived with carryovers from the first park as well as additional amenities such as an alligator farm, a shooting gallery, a lake and boat rentals. 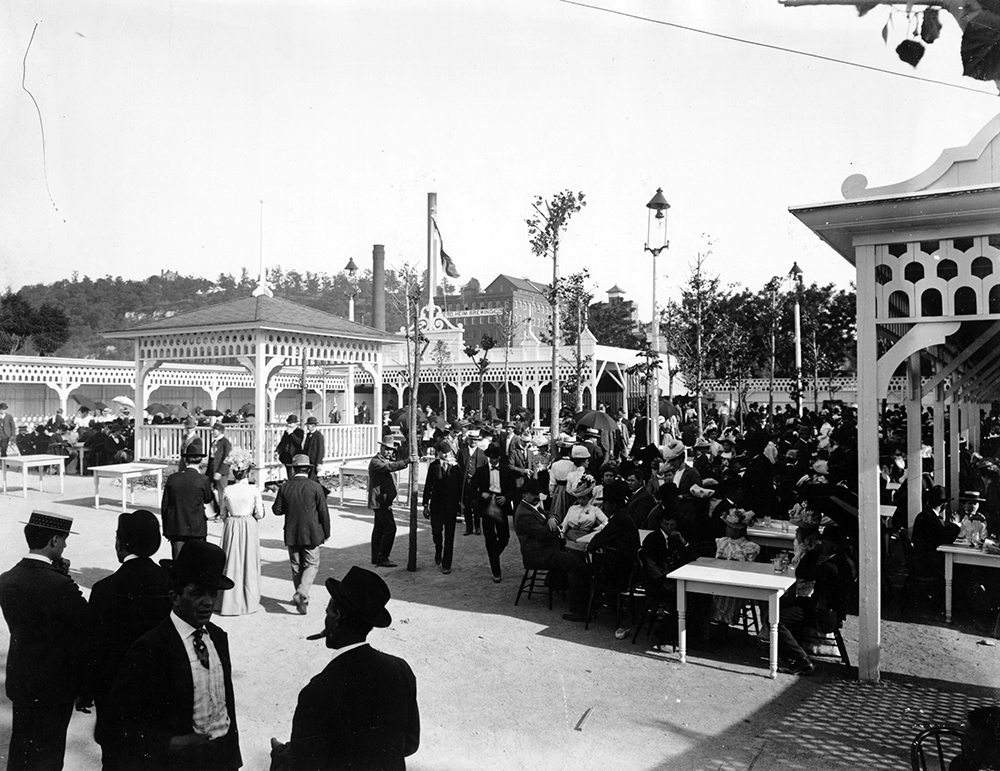 Crowd at the first Electric Park in the East Bottoms with the Heim Brewery in the background, 1900.

The Living Statuary, which featured elaborately costumed female dancers and a colorful light and water show, was one of the most popular nightly attractions. Equally important was the bandstand, which attracted top performers including famous American composer and conductor John Philip Sousa. Sousa reportedly remarked that the bandstand at Electric Park was the best in which his band had played. Living just a few blocks away, another notable and frequent visitor to the park was a young Walt Disney. Many of the attractions he enjoyed at Electric Park as a child served as inspiration for his Disneyland theme park. 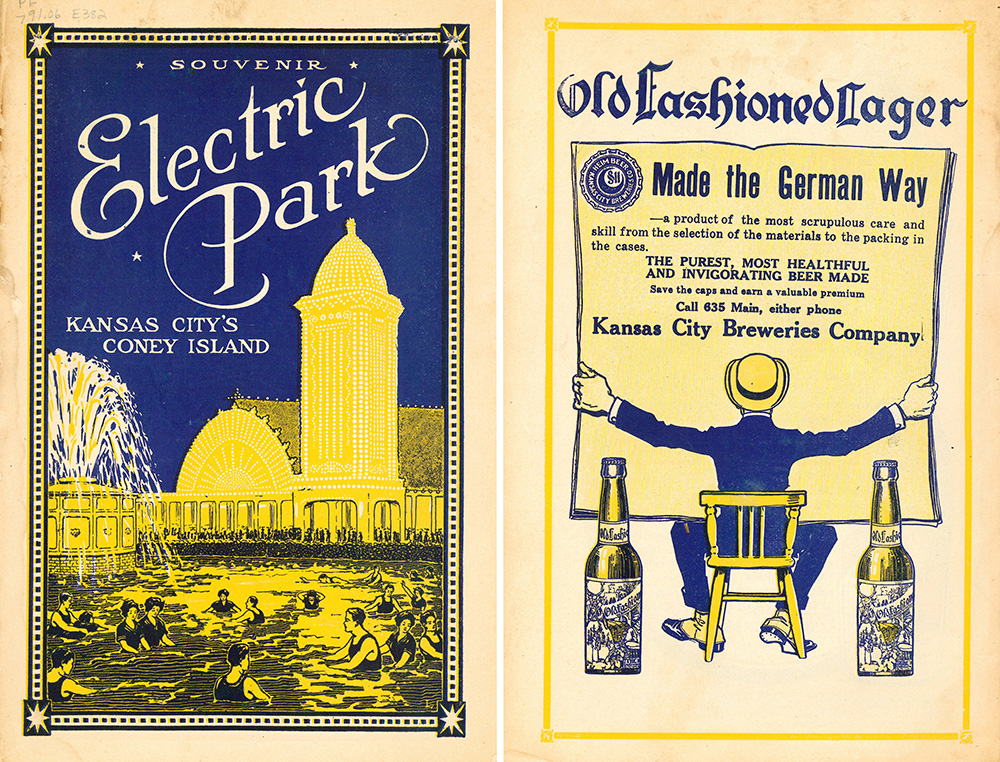 Front and back covers of a souvenir program for the second Electric Park, 1913.

Amusement parks and other forms of entertainment ebb and flow with popular whims, and Electric Park was no exception. By the 1920s and 1930s, radio and movies drew interest away and the park’s lights, fountains, and rides were no longer a great attraction. In 1925, a fire destroyed many of its buildings. Swimming and public dances remained popular there until a second fire in 1934 forced what remained of the park to shut down. The Heim brothers could not reinvest in the park as their brewing company had gone out of business with Prohibition. In 1948, the remnants of the Electric Park roller coaster were razed to make way for the Village Green Apartments. By then, all three of the Heim brothers had passed away and their entrepreneurial legacy had largely disappeared. 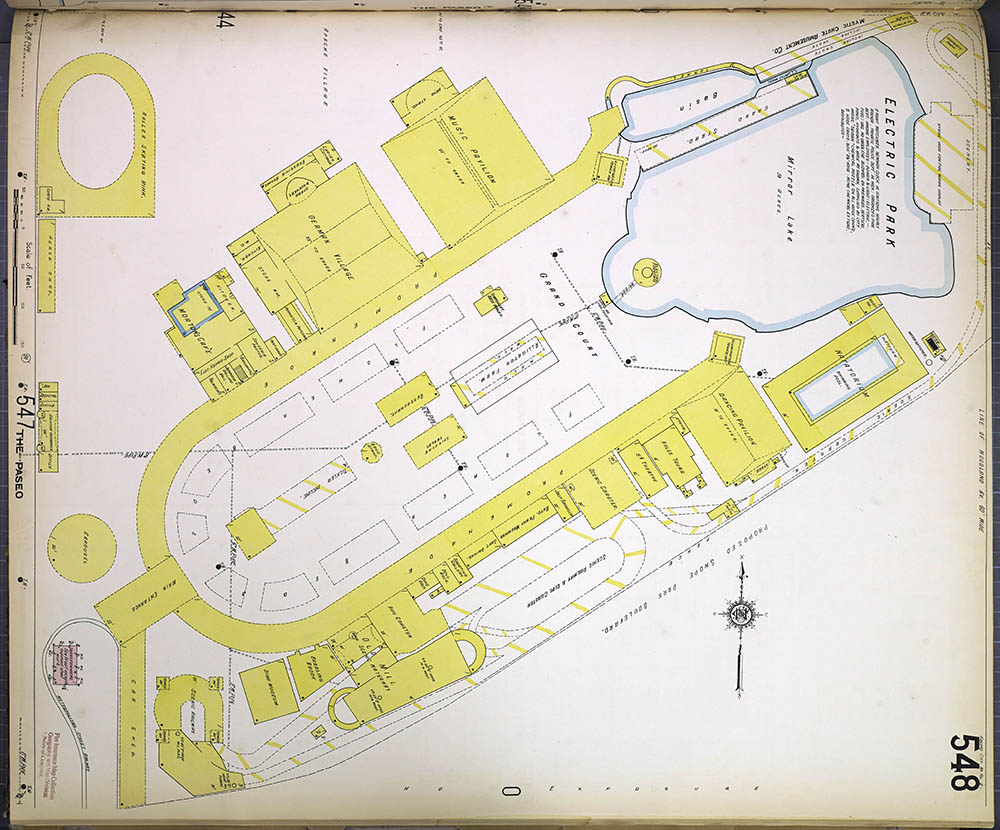 Today, the J. Rieger & Co. operates its distillery out of the old Heim Brewery’s bottling facility, adjacent to the original Electric Park in the East Bottoms. Its public opening will be this Friday. 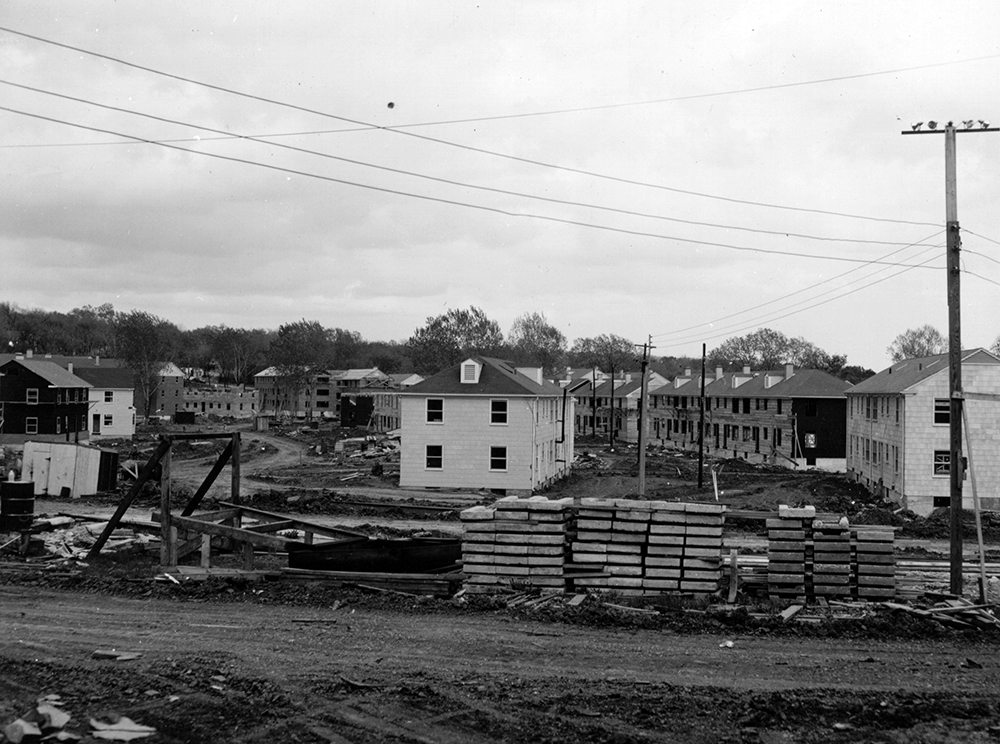