These old stone buildings off Rockhill hit close to home for KCQ. What’s their story?

Ever heard of Pierce Avenue?

But don’t worry. You’re about to learn more. Thanks to Brenda Kay Hoff, who recently asked “What’s your KCQ?, a partnership with the Kansas City Public Library, “What’s the history of the old stone houses just north of the Kauffman Memorial Garden?”

Over the years, those eight identical houses on Pierce Avenue, between Locust Street and Rockhill Road have sometimes been called Printer’s Row. The nickname comes as William Rockhill Nelson is believed to have built them as rental housing for employees of The Star, which he co-founded in 1880. 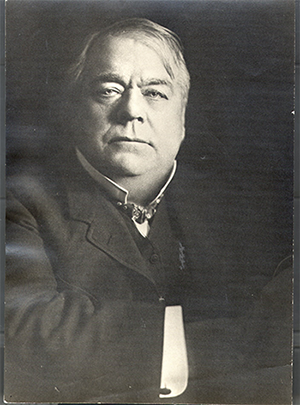 Nelson’s own home was known as Oak Hall, a sprawling estate where the Nelson-Atkins Museum of Art now stands. A proponent of the City Beautiful movement, Nelson practiced what he preached while developing the Rockhill neighborhood around its perimeter. Winding roads, rambling rock walls and lots of greenery were the district’s hallmarks.

Nelson added the Pierce Street​ houses (originally there were eleven of them) to Rockhill around 1908.

Today, we’d be skeptical of most employer-built housing — but these were the real deal. Seriously solid limestone and frame structures evoking Cape Cod or perhaps the English countryside. They rented for roughly $30 a month — about $857 in today’s world. 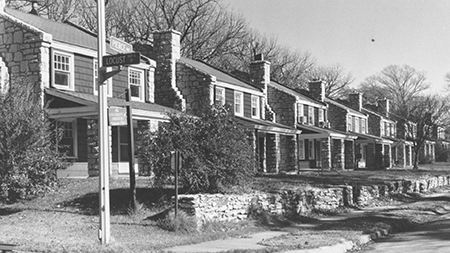 The houses on Printer’s Row weren’t large — roughly 1600 square feet. They had three bedrooms and a fireplace on both the first and second floors. Nelson wanted unobstructed views for his renters, so he built only on one side of the street (he also used the same strategy with a row of larger homes on 47th Street Terrace. As an aid to “privacy,” he only placed windows on one side of each house. 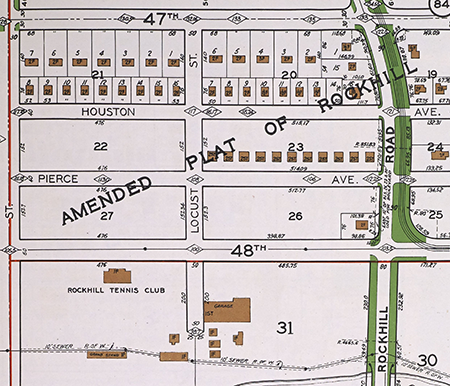 Nelson died in 1914, and somewhere along the way, people without ties to the newspaper began to occupy the houses. Libby Gordon, now 92, said her parents moved to 524 Pierce St. in 1925, and were living there when she was born three years later.

Among other things, Gordon remembers that because the homes had no garages, the family car was delivered each day from the Rockhill Garage across the street (where the Kauffman Garden is today.)

The Nelson Trust held onto the houses until 1949, when Kansas City University, now UMKC, purchased them for $5,500 apiece. Their first role was as low-cost housing for faculty members.

According to school documents, renters were only allowed to stay in them for three years.

By the 1960s, the houses had been converted for a variety of uses — office space, classrooms, theatrical supplies. The location at 524 Pierce St. was even repurposed to serve as the studios of KCUR-FM.

A decade later, things began to look dire for the historic complex when UMKC eyed the block as a potential site for its new Performing Arts Center. Fearing public reaction if the landmarks were razed, the school and the Historic KC Foundation devised a plan to relocate at least some of them.

As it turned out, the university chose to build the center elsewhere. In the meantime, the houses (and the rest of the Rockhill Historic District) were added to the National Register of Historic Places.

When UMKC put the houses on the market in 1999, institutions like the Kauffman Foundation jumped in. So did a few private buyers, excited by the first chance to own a Pierce Avenue property in nearly a century. Karen Moninger, a UMKC employee, and her husband Jim were at the head of the line. 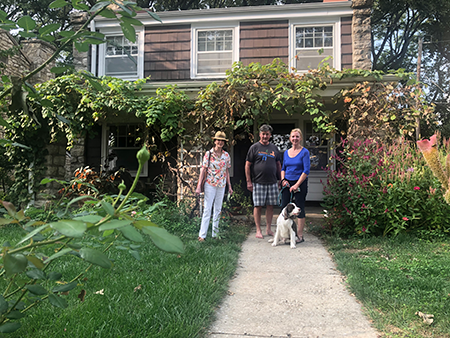 Even now, life on this unique block pleases them.

“Everybody knows each other,” Karen said. She points out that the high degree of neighborliness is due in part to another notable aspect of these homes: There are no fences between them. And there never will be, thanks to restrictions that come with their historic designation.

The result is a block-long communal backyard that Susannah Evans describes as “a lovely run of trees and flowers.”

On a crisp fall morning, Evans and her husband Mark Dehner checked in on a pair of Pierce Avenue rentals that her mother bought 20 years ago. Dehner noted that despite the uniform nature of the street’s structures, the interiors of each residence have been creatively reimagined.

For Jack Lapping and Jocelyn Diehl-Lapping, the house they’d rented at 720 Pierce had only one big problem, their growing family. With 2-year-old Sabine added to the mix, the couple simply needed more space, which they found (along with a garage) in one of those bigger versions that Nelson built just a block away.

They moved in this summer.

“It’s crazy how many people come by and ask about these houses. It’s even on Segway tours!” Jocelyn Diehl-Lapping laughs. “But best of all it’s close to so much green space — Theis Park, the garden, the Nelson’s lawn. This really is a hidden gem.”