There’s a ‘Bridge to Nowhere’ in Kansas City. This Week's KC Q Explains Where and Why

J.P. Morgan of Olathe suspects most people haven’t noticed the bridge that goes nowhere in Kansas City, even though thousands of drivers pass it on their daily commutes.

It’s in the Benton Curve on Interstate 70, between Benton Boulevard and Indiana Avenue.

"I’ve seen it for years and I was always wondering,” Morgan said. “I’ve tried to look it up online but found no information on it whatsoever."

What Morgan has noticed is an old highway bridge that spans Truman Road, connecting nothing but one patch of grass to another. It appears to serve no purpose and seems out of place, plopped down on the small green spaces between busy sections of active highway.

"My sister lives four blocks away from it and she’s never noticed it’s even there," Morgan said. 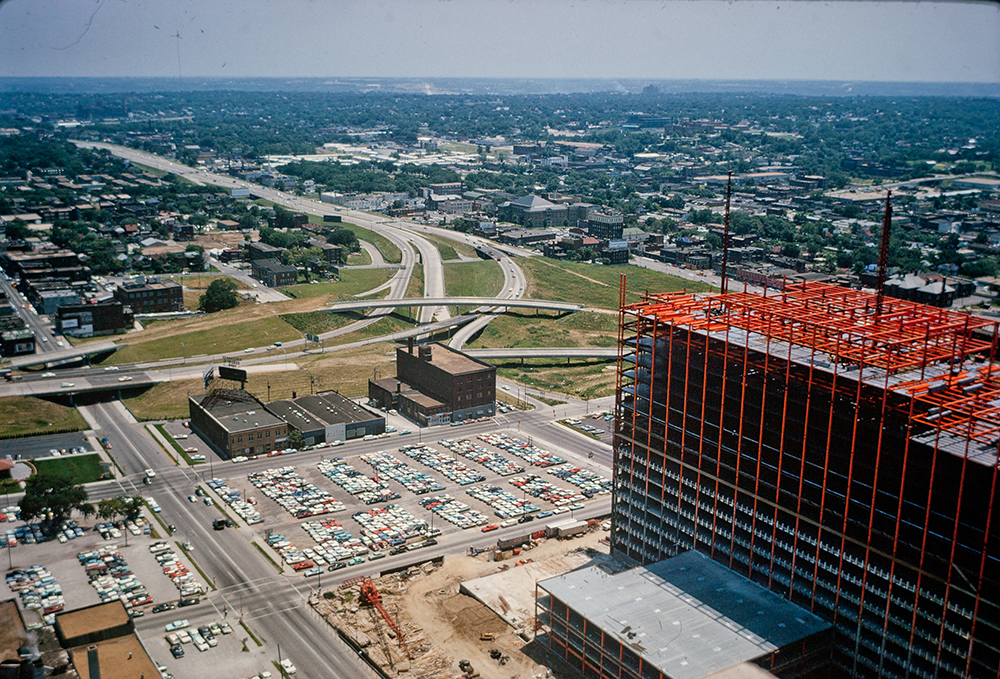 But he had. And his inquiry would eventually lead him to talk about the TV show "Doctor Who," but he began by reaching out to KC Q with this question:

"What’s with bridge to nowhere located between the E. & W. Lane bridges of I-70 at Truman & Indiana?"

The answer takes us 50 years back into Kansas City’s transportation history. Jeff Hardy, district design engineer for the Missouri Department of Transportation’s Kansas City District, explained what happened. The bridge was built in the 1960s as part of the interstate system and was used as an on-ramp from Benton to eastbound I-70 for several years. 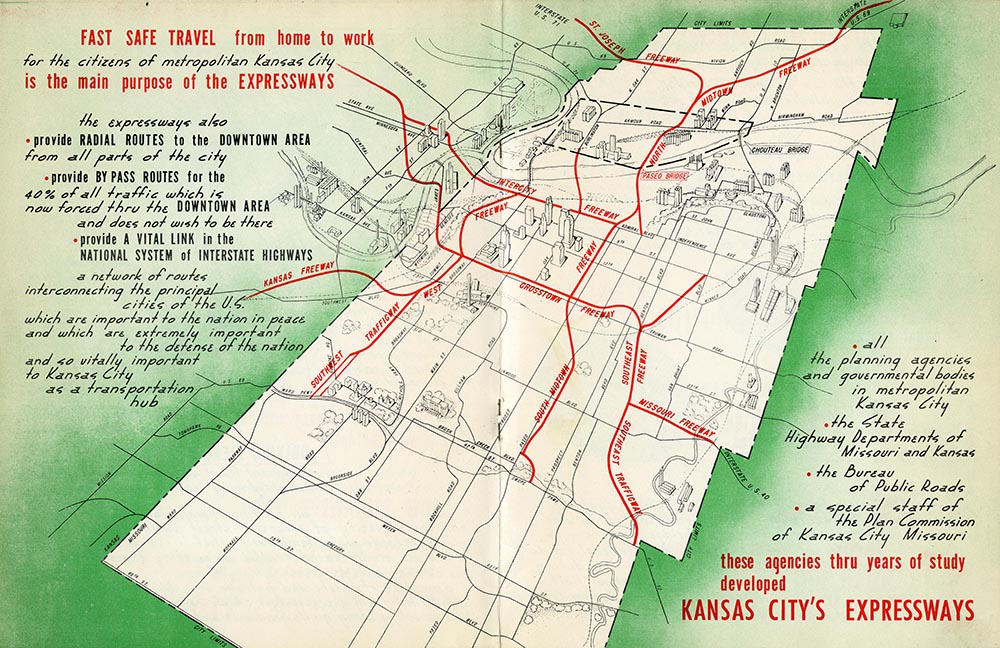 An Illustrated map showing the planned expressway system in the Kansas City area in 1952. Text printed on the map explains how the freeway system will work and how it will benefit the public. The planned connection from the Southeast Freeway to the Southeast Trafficway that was discarded in favor of the Bruce R. Watkins Drive plan can be seen. Kansas City Public Library

Originally, the area was intended to be a system interchange with another freeway. But plans changed, and the freeway was never built. Instead, the Bruce R. Watkins Parkway was built to the west. In the mid-1970s, the ramp was removed but the bridge remained. Most recently, the bridge has been an object of scientific study by the University of Missouri. 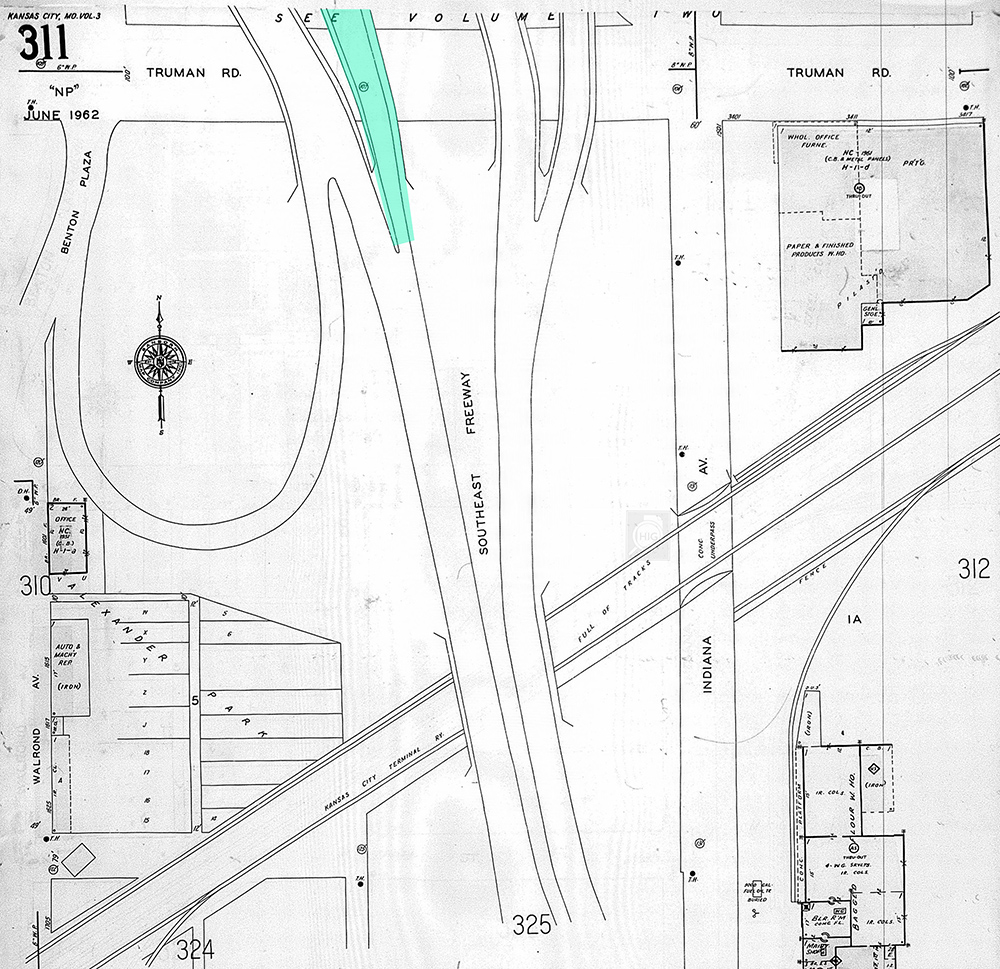 A 1962 Sanborn fire insurance map showing the so-called Bridge to Nowhere (highlighted in green) when it was a functional part of the Southeast Freeway. Kansas City Public Library

They have been studying to see the effects of weather on a bridge that you don’t throw salt or traffic on," Hardy said.

The study is complete and the transportation department plans to eventually remove the bridge, but that won’t happen for years. It could be removed as bridges in that area are replaced and the curves at Jackson Avenue and Benton are reconfigured. Thinking about the vestigial bridge put Morgan in mind of a plan he never put into action.

"I don’t suppose you know who Doctor Who is?" he asked.

That question came out of left field. KC Q wondered how the British science fiction television program produced by the BBC since the early 1960s was relevant to Kansas City’s highways. Morgan explained.

As a fan of the show, he had built a portable TARDIS, a model of the machine used in the show to travel through space and time. It resembled an old-style blue police box.

"I was going to put it in different places around Kansas City," he said. Kauffman Stadium, and other spots that would make for good photo opportunities. He thought the Bridge to Nowhere on the Benton Curve could be one.

"I thought it would be pretty cool if people driving into downtown to work one day would see that Doctor Who booth right in the middle of that bridge." It would be like an art installation, he said.

"But I didn’t want to get arrested for trespassing." He also feared the TARDIS might distract enough drivers to cause a wreck. "I decided not to do that."

J.P. asked this question as part of our ongoing series "What’s Your KC Q?" Do you have a burning Kansas City question? Tell us below or click here if you are unable to see the form.