Taking a 'Cue from the Master: Henry Perry, Barbecue King of Kansas City

July 3 is Henry Perry Day in Kansas City, honoring one of the pioneering pitmasters of the barbecue arts.  In celebration of Perry's culinary legacy, the Library's Missouri Valley Special Collections offers some choice cuts of the history behind the "Barbecue King of Kansas City,"

Looking for more smokin' information about barbecue? Check out the suggested topic list in our catalog.

The man who first assumed the title of Barbecue King of Kansas City was born on March 16, 1874, in Shelby County, Tennessee. By the age of 15, Henry Perry had started learning his trade working in steamboat kitchens traveling up and down the Mississippi River. Eventually he made his way to Kansas City, initially finding work as a porter in a Quality Hill saloon by 1907.

The future king had other ideas for his future in mind. By 1908, he had started selling smoked meats to downtown workers from a stand in the Garment District. Perry relocated to the east side, first setting up shop at 17th and Lydia before landing at his famed 19th and Highland location. From here, Perry satisfied generations of hungry Kansas Citians and trained the next generation of barbecue gurus. Arthur Pinkard worked for Perry before helping George Gates establish the Gates Barbecue empire. And when Perry died on March 22, 1940, the business was inherited by Charlie Bryant, older brother of Arthur Bryant, who took over the business in 1946.

While we know when Perry passed at General Hospital #2, his ultimate resting place is unknown. The remains of Kansas City’s preeminent "Barbecue Man," the occupation listed on his Missouri death certificate, were taken to Osceola, Arkansas, where the trail goes cold.

The following is an article covering Henry Perry’s life and career printed in the February 26, 1932, edition of The Call. A typed transcription follows the image. 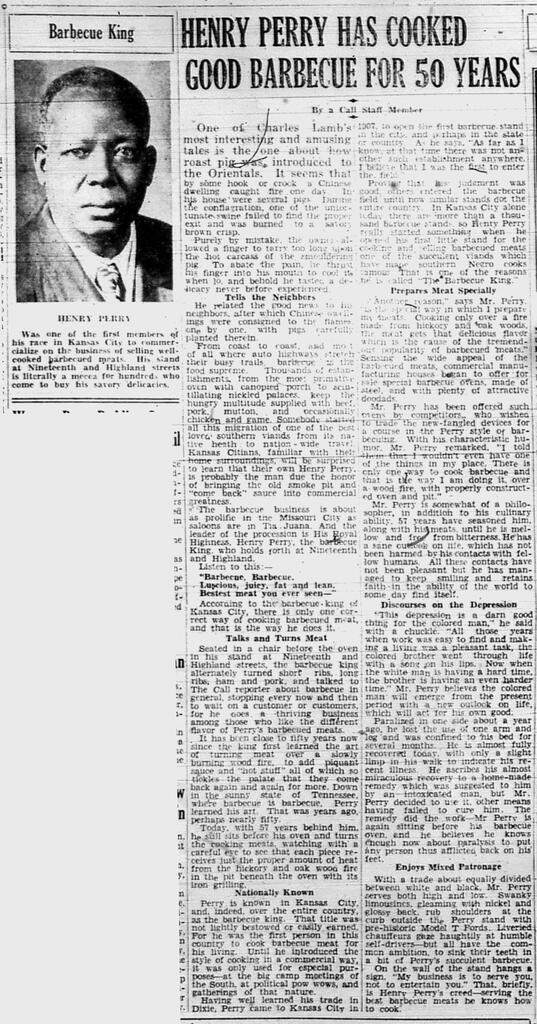 Scan of the original article from The Call

Henry Perry was one of the first members of his race in Kansas City to commercialize on the business of selling well-cooked barbecued meats. His stand at Nineteenth and Highland streets is literally a mecca for hundreds who come to buy his savory delicacies.

By a Call Staff Member

From coast to coast, and most of all where auto highways stretch their busy trails, barbecue is the food supreme. Thousands of establishments from the most primitive oven with canopied porch to scintillating nicked palaces, keep the hungry multitude supplied with beef, pork, mutton, and occasionally chicken and game. Somebody started all this migration of one of the best loved southern viands from its native hearth to nation-wide travel. Kansas Citians, familiar with their home surroundings, will be surprised to learn that their own Henry Perry is probably the man due the honor of bringing the old smoke pit and “come back” sauce into commercial greatness.

The barbecue business is about as prolific in the Missouri City as saloons are in Tijuana. And the leader of the procession is His Royal Highness, Henry Perry, the barbecue King, who holds forth at Nineteenth and Highland.

According to the barbecue king of Kansas City, there is only one correct way of cooking barbecued meat, and that is the way he does it.

Seated in a chair before the oven in his stand at Nineteenth and Highland streets, the barbecue king alternately turned short ribs, long ribs, ham and pork, and talked to The Call reported about barbecue in general, stopping every now and then to wait on a customer or customers, for he does a thriving business among those who like the different flavor of Perry’s barbecued meats. 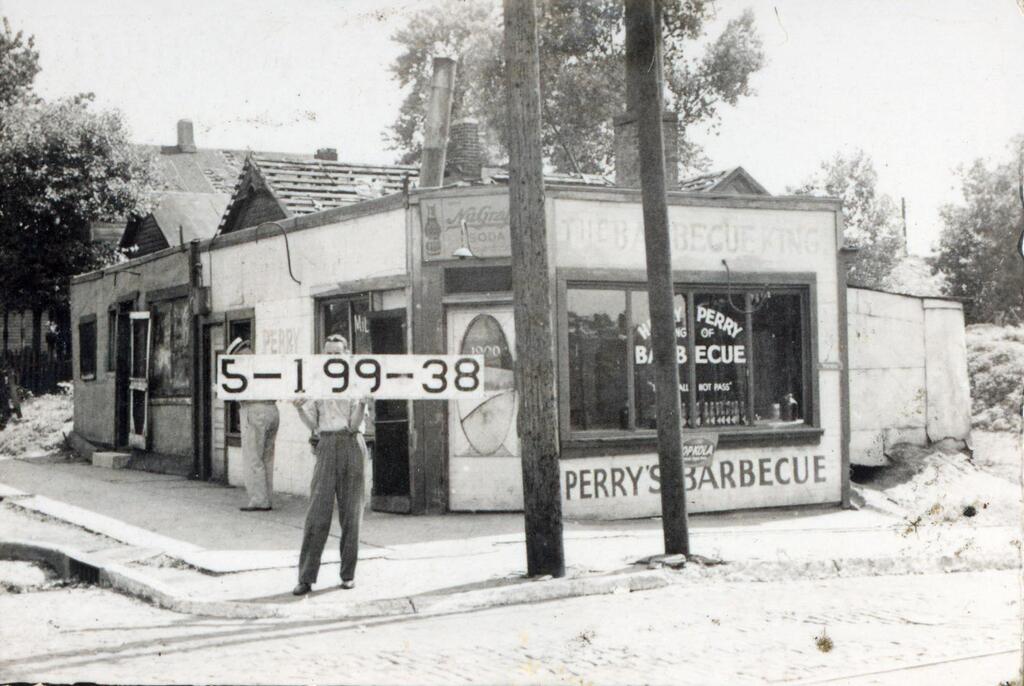 It has been closed to fifty years now since the king first learned the art of turning meat over a slowing burning wood fire, to add piquant sauce and “hot stuff” all of which so tickles the palate that they come back again and again for more. Down in the sunny state of Tennessee, where barbecue is barbecue., Perry learned his art. That was years ago, perhaps nearly fifty.

Today, with 57 years behind him, he still sits before his oven and turns the cooking meats, watching with a careful eye to see that each piece receives just the proper amount of heat from the hickory and oak wood fire in the pit beneath the oven with its iron grilling.

Perry is known in Kansas City, and, indeed over the entire country, as the barbecue king. That title was not lightly bestowed or easily earned. For he was the first person in this country to cook barbecue meat for his living. Until he introduced the style of cooking in a commercial way, it was only used for especial purposes – at the big camp meetings of the South, at political pow wows, and gatherings of that nature.

Having well learned his trade in Dixie, Perry came to Kansas City in 1907 to open the first barbecue stand in the city and perhaps in the state or country. As he says, "As far as I know, at that time there was not another such establishment anywhere. I believe that I was the first to enter the field." 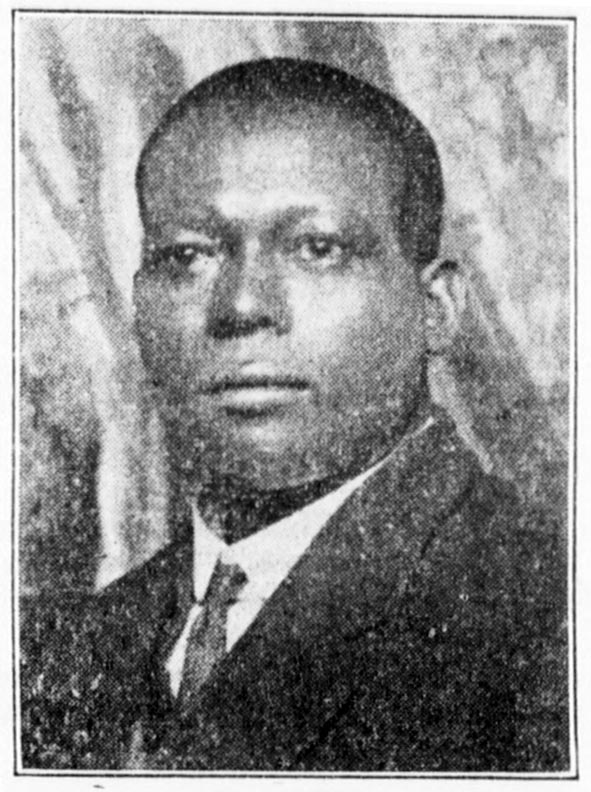 Henry Perry portrait that appeared in The Kansas City Sun in 1917.

Proving that his judgement was good, others entered the barbecue filed until now similar stands dot the entire country. In Kansas City alone today there are more than a thousand barbecue stands, so Henry Perry really started something when he opened his first little stand for the cooking and selling barbecued meats, one of the succulent viands which have made southern Negro cooks famous. That is one of the reasons he is called "The Barbecue King."

"Another reason," says Mr. Perry, "is the special way in which I prepare my meats." Cooking only over a fire made from hickory and oak woods, the meat gets that delicious flavor which is the cause of the tremendous popularity of barbecued meats." Sensing the wide appeal of the barbecued meats, commercial manufacturing houses began to offer for sale special barbecue ovens, made of steel, and with plenty of attractive doodads.

Mr. Perry has been offered such ovens by competitors, who wish to trade the new-fangled devices for a course in the Perry style of barbecuing. With his characteristic humor, Mr. Perry remarked, "I told them that I wouldn’t even have one of the tings in my place. There is only one way to cook barbecue and that is the way I am doing it, over a wood fire, with properly constructed oven and pit." 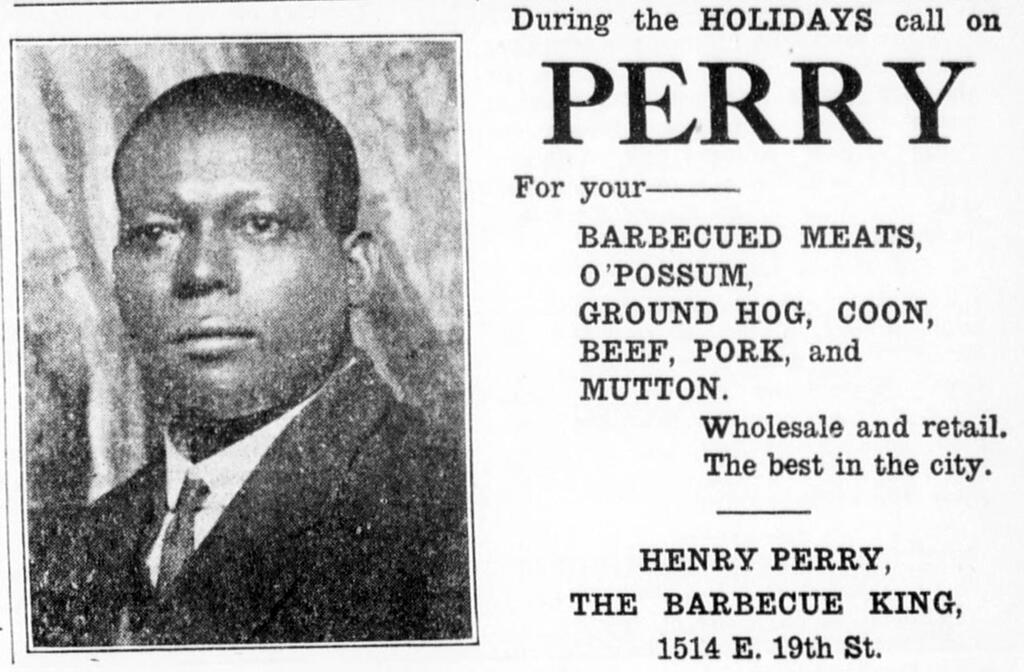 Mr. Perry is somewhat of a philosopher, in addition to his culinary ability, 57 years have seasoned him, along with his meats, until he is mellow and free from bitterness. He has a sane outlook on life, which has not been harmed by his contacts with fellow humans. All these contacts have not been pleasant, but he had managed to keep smiling and retains faith in the ability of the world to some day find itself.

Discourses on the Depression

"This depression is a darn good thing for the colored man," he said with a chuckle. "All those years when work was easy to find and making a living was a pleasant task, the colored brother went through life with a song on his lips. Now when the white man is having a hard time, the brother is having an even harder time." Mr. Perry believed the colored man will emerge from the present period with a new outlook on life, which will act for his own good.

Paralyzed in one side about a year ago, he lost the use of one arm and leg and was confined to his bed for several months. He is almost fully recovered today, with only a slight limp in his walk to indicate his recent illness. He ascribes his almost miraculous recovery to a home-made remedy which was suggested to him by an intoxicated man, but Mr. Perry decided to use it, other means having failed to cure him. The remedy did the work – Mr. Perry is again sitting before his barbecue oven, and he believes he knows enough now about paralysis to put any person thus afflicted back on his feet.

With a trade about equally divided between white and black, Mr. Perry serves both high and low. Swanky limousines, gleaming with nickel and glossy back rub shoulders at the curb outside the Perry stand with per-historic Model T Fords. Liveried chauffeurs gaze haughtily at the humble self-drivers – but all have the common ambition, to sink their teeth in a bit of Perry’s succulent barbecue.

On the wall of the stand hangs a sign, My business is to serve you, not to entertain you. That, briefly, is Henry Perry’s creed – serving the best barbecued meats he knows how to cook.

Feed your hunger for more barbecue background with this list of books, resources, and more.