Post date:
Monday, November 19, 2018
Some of the wishes were neatly spelled out. Others spilled out in a scrawl. Most all were warm, and wistful and from the heart.

I wish I could hug my mom again

I wish I could stop drinking

All told, visitors to the Kansas City Public Library’s downtown Central Library left some 7,000 handwritten expressions at an altar that was part of Ryan Wilks’ immersive exhibit, Here Where You Wish, earlier this year. “More than I could have fathomed,” he says. “The sheer number of people who came – I would assume mostly because they just stumbled upon it – was incredible. I’ve never reached as many people with art as I have with this show.

“I have eyes on me that I haven’t had before,” he says. “People know what I’m doing.” 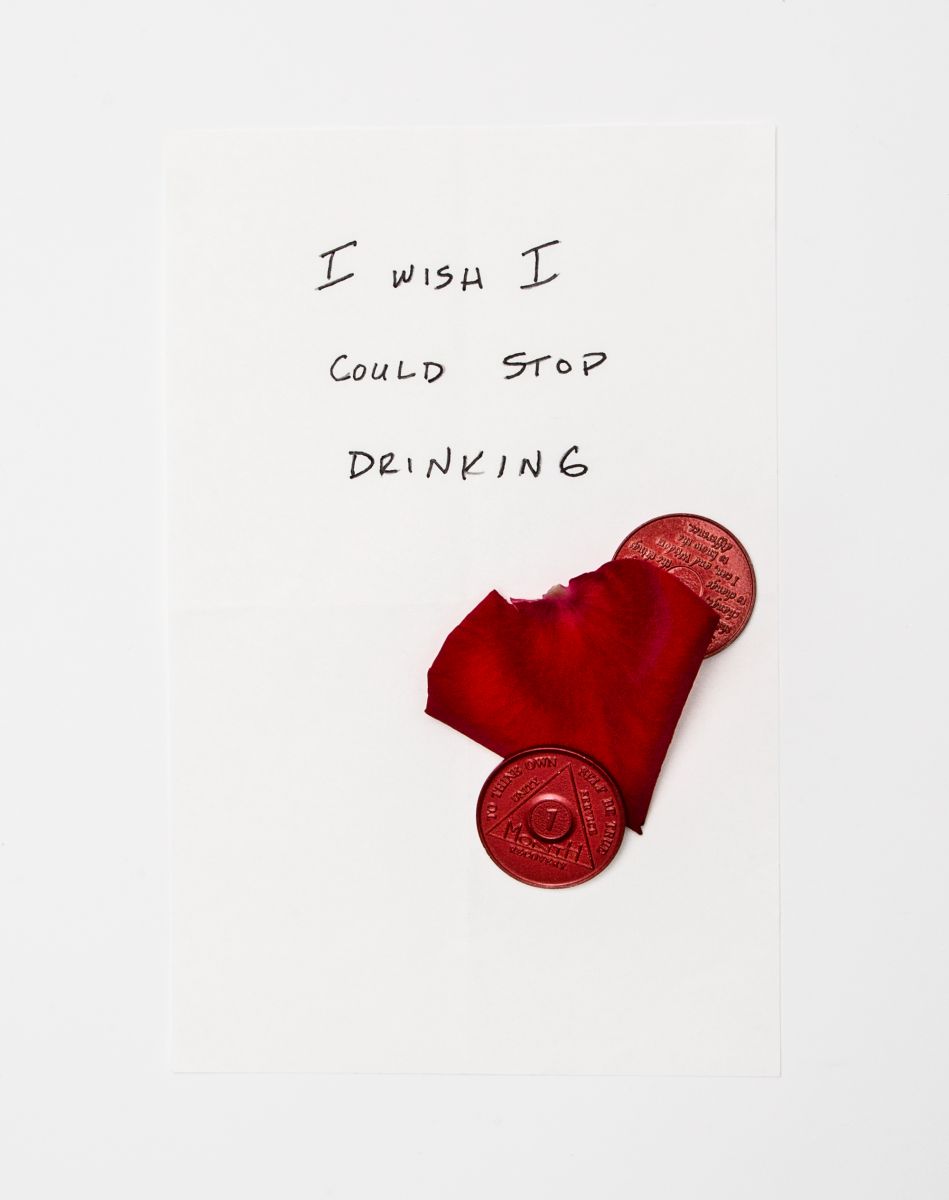 One of more than 7,000 wishes left at Ryan Wilks’ exhibit Here Where You Wish. The writer also left sobriety coins. (Photo by Stuart Heidmann) 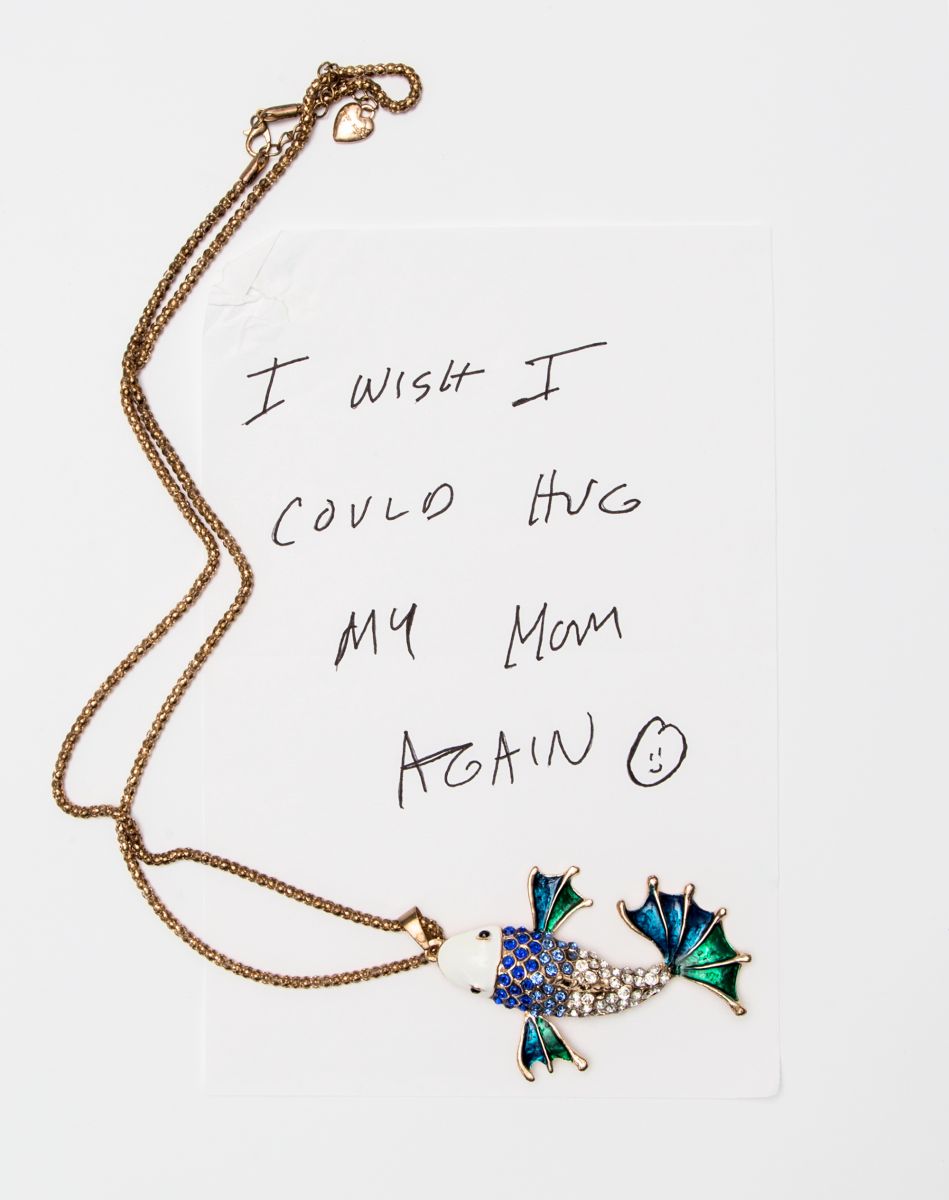 One of more than 7,000 wishes left – with pendants and a chain – at Ryan Wilks’ exhibit Here Where You Wish. (Photo by Stuart Heidmann)
It underscores the emergence of the Central Library and its two formal galleries as a presence in Kansas City’s flourishing art community.

Nearly 103,000 people visited eight exhibits in the first-floor Genevieve Guldner and second-floor Rocky and Gabriella Polony Mountain galleries in 2017-18, an average of 302 each day the Library was open. Both numbers were Library records. The daily average spiked further, to 375, in the first few months of ’18-19.

Wilks’ Here Where You Wish, a collaboration with fellow visual artists Ari Fish and Sean Prudden and musician Tim J. Harte, pulled in more than 28,000 people over a 10-week run in April, May and June. That made it KCPL’s most popular exhibit outside a 23-day visit – the only one in Missouri – by one of Shakespeare’s rare, nearly 400-year-old First Folios in June 2016. 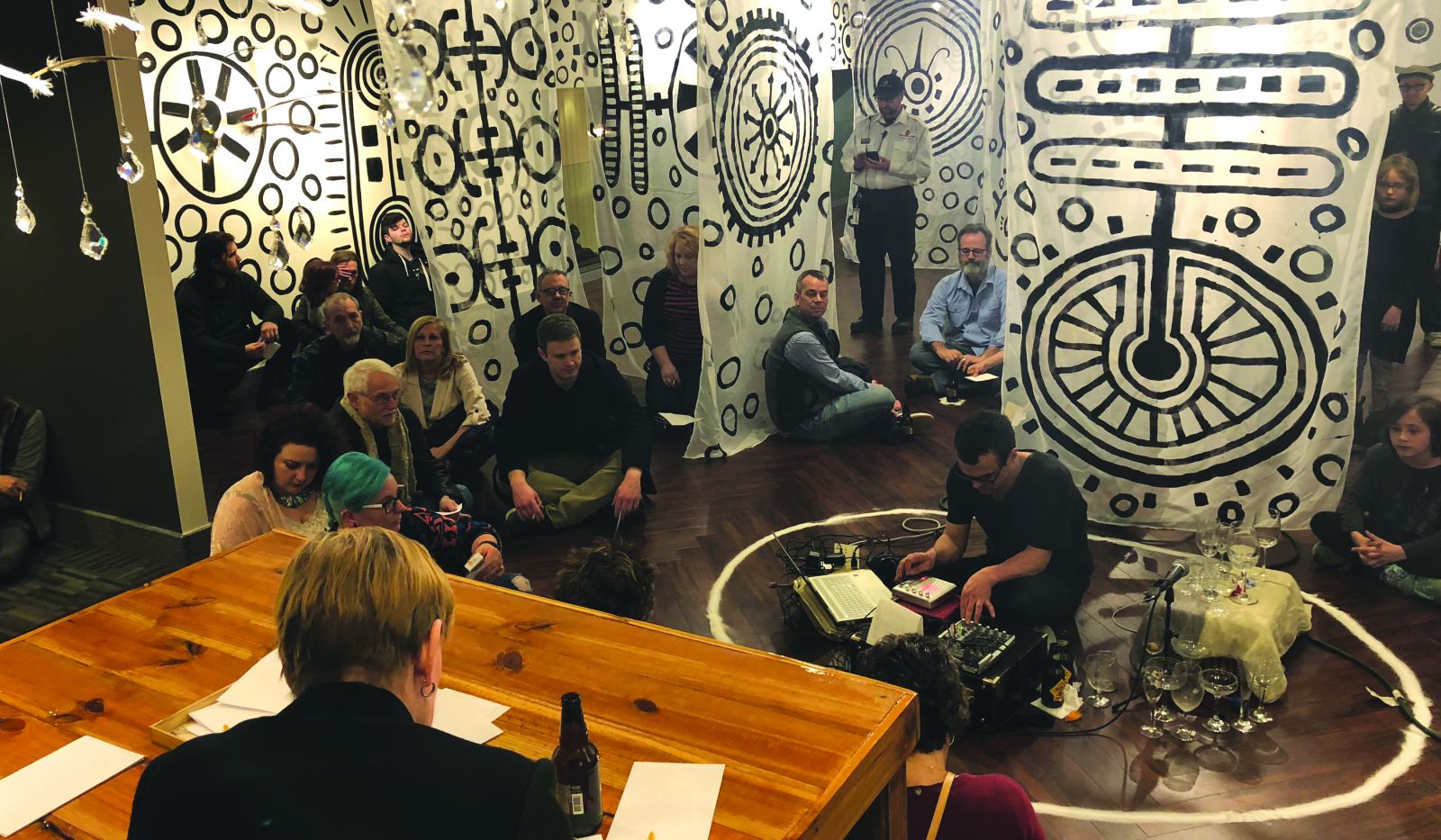 Musician and composer Tim J. Harte (center right) executes the musical component of Ryan Wilks’ multisensory Here Where You Wish during the exhibit’s closing event at the Central Library in May. (Photo by Luis Mortera)

Preceding the Wilks exhibit in the Mountain Gallery was Cattle, Cowboys and Culture: Kansas City and Amarillo, Building an Urban West, a sprawling collection of artifacts, photos and art illuminating the shared history of the two cities. It drew almost 33,000 people over an extended, 25-week stay.

A couple of traveling exhibit also have proven popular in the past year: Will Eisner: The Centennial Celebration, 1917-2017, spotlighting the artwork of the comics and graphic novel icon; and the Smithsonian Institution’s inventive Things Come Apart, which exposed the inner workings of a watch, camera, iPod and other everyday possessions.

It further attests to today’s libraries as destinations for far more than books and other traditional library services. 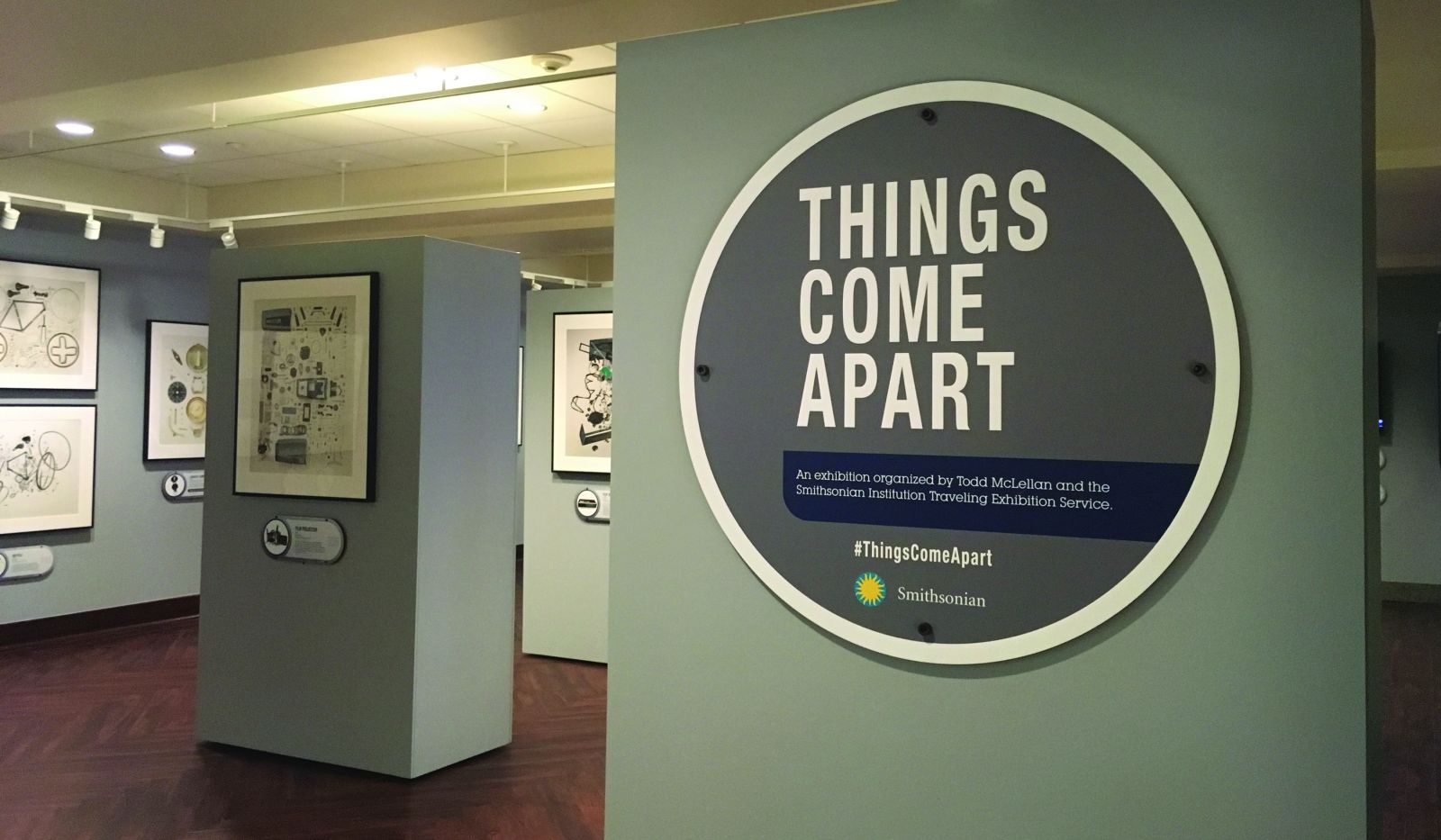 The Smithsonian Institution’s traveling exhibit Things Come Apart, on display at the Central Library in 2017, artfully illustrated the disassembly of many of our everyday possessions. (Kansas City Public Library photo) 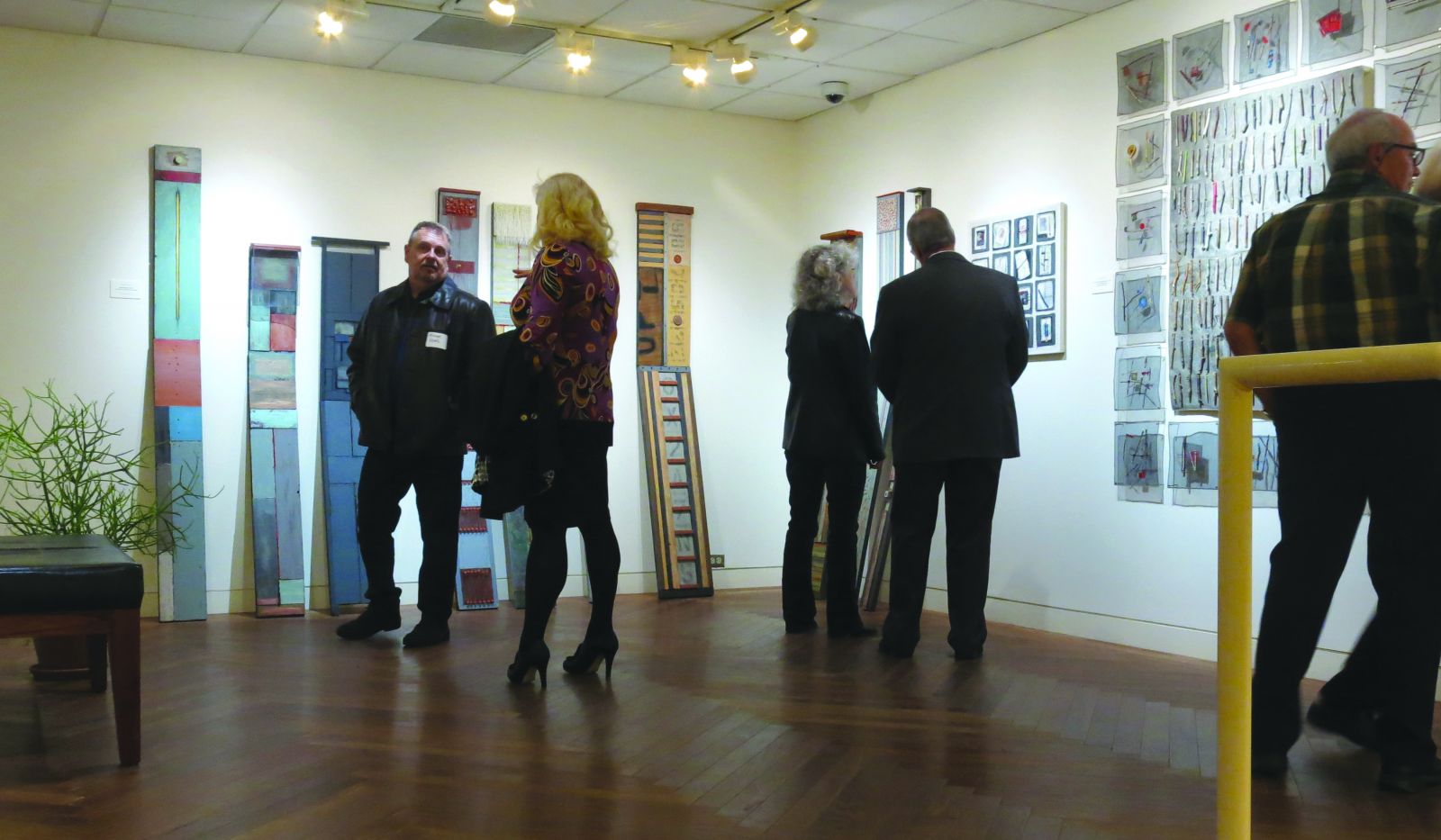 Visitors take in Jason Pollen’s Unfurled at the downtown Central Library. The two-part exhibit ran in 2014 and early 2015. (Kansas City Public Library photo)
“Usually, one thinks of having shows in the kind of tried-and-true places in the gallery circuit, the known spaces,” says noted Kansas City textile artist, designer, and painter Jason Pollen. “But for art to branch out in terms of where it’s experienced is a pretty wonderful thing to happen.

“In the Crossroads, you’re preaching to the choir, right? Everybody knows about the galleries, and the people who love them go and do their thing. But art can happen in so many different places. You have people who don’t come the library for that particular reason. But while they’re there, they notice there are galleries and they wander in, and they’re exposed to something they hadn’t imagined. Maybe by doing that, they become more curious about going to other museums or finding out what other artists are doing in town.

“Think of kids coming in and seeing something that’s not usually part of their agenda for the day. It opens them to possibilities.”

“I’ve seen a lot of work that’s really interesting, but I don’t think it would necessarily appeal to the cross section of people we get here,” she says. “There are things I try to be cognizant of. How is the work relevant in the Library environment? Is the artist local? Will the content appeal to a relatively large group of people? Is it somehow informed by the Kansas City area? Is there an educational component? All of that plays into it.”

Ducey has partnered with the Charlotte Street Foundation and the Kansas City Art Institute on separate yearlong series of exhibits. Meanwhile, she’s fielding an increasing number of inquiries from artists interested in displaying their work at the Library.

“I think it has become a place for up-and-coming artists to want to exhibit,” she says. “That’s very exciting, and to see the attendance numbers continue to increase means we’re on to something.” 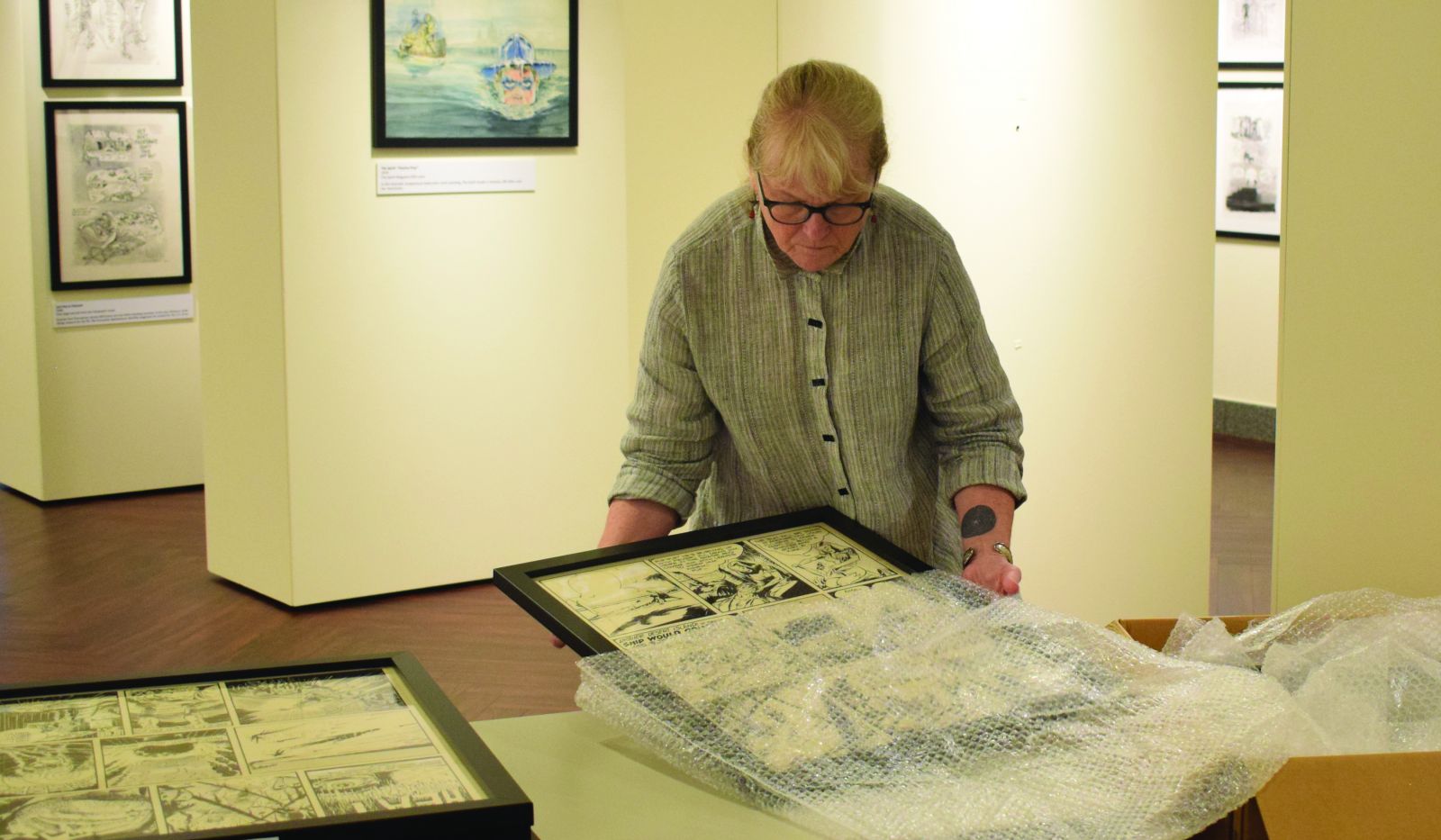 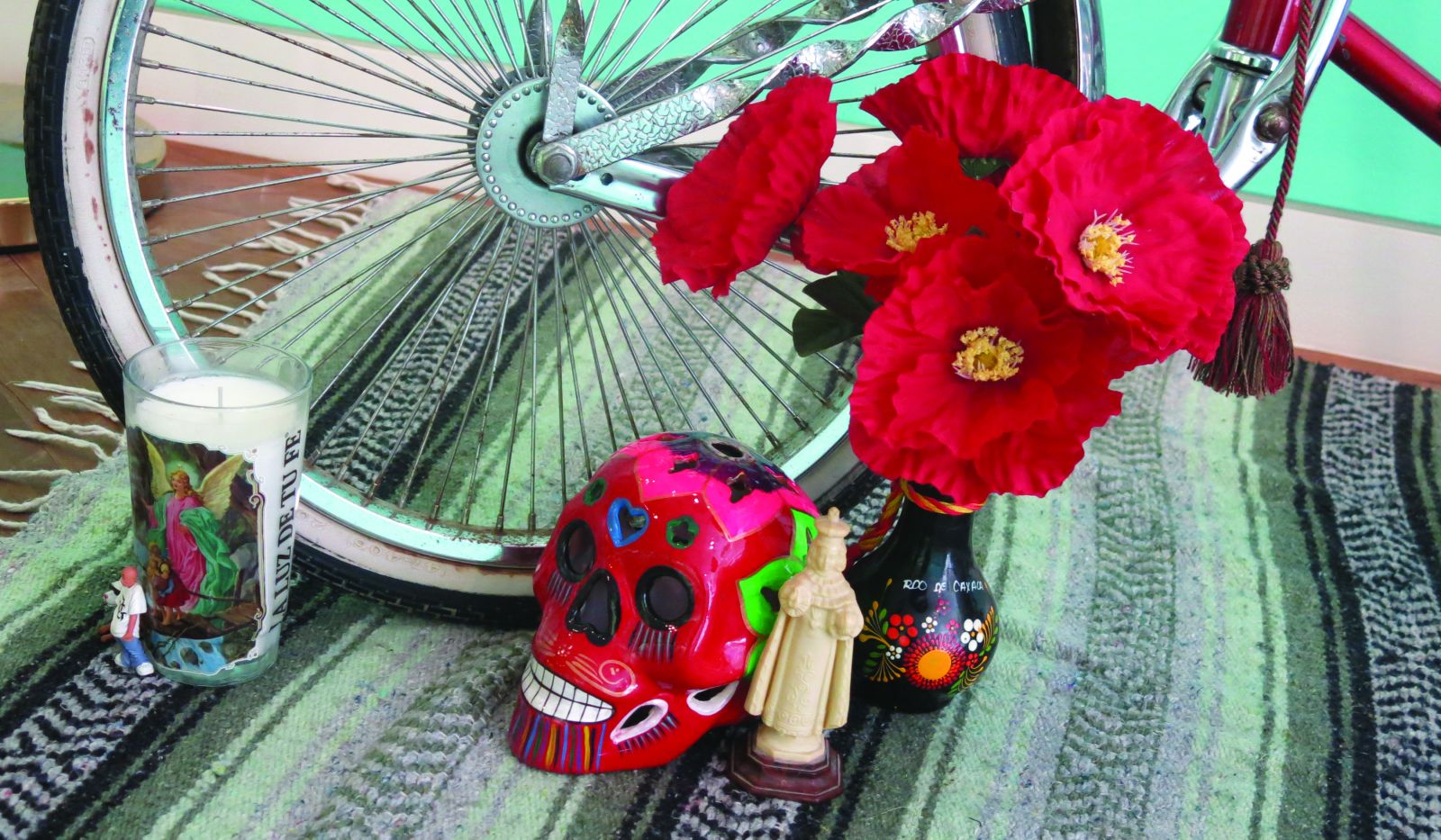 Kansas City artist Rodolfo Marron III created a new collection of works for This Is for La Raza, the last in a series of Library exhibitions commemorating the 20th anniversary of the Charlotte Street Foundation in 2017. (Kansas City Public Library photo)
The 30-year-old Wilks was one of those inquiring artists, putting together a proposal for Here Where You Wish with Ken Petti of Kansas City’s Heidmann Art Salon. Ducey liked the sound of it, and both she and Wilks marveled at connection the exhibit made with those who took in its multisensory experience.

The Library, Wilks says, “is like a soft-landing spot. Everyone is welcome. It doesn’t matter what you wear. It doesn’t matter how much money you have. You can go in and enjoy art regardless of your social status.
“There are no limitations.”

A longer version of this entry, written by the Library’s Steve Wieberg, appears in the January-February edition of KC Studio magazine.