All locations will be closed from Thursday, Nov. 26 to Monday, Nov. 30 (reopening Tuesday, December 1) to allow extra time to prepare, coordinate and ensure adequate staffing amid rising cases of COVID-19. Get the latest updates on the Library's COVID-19 response 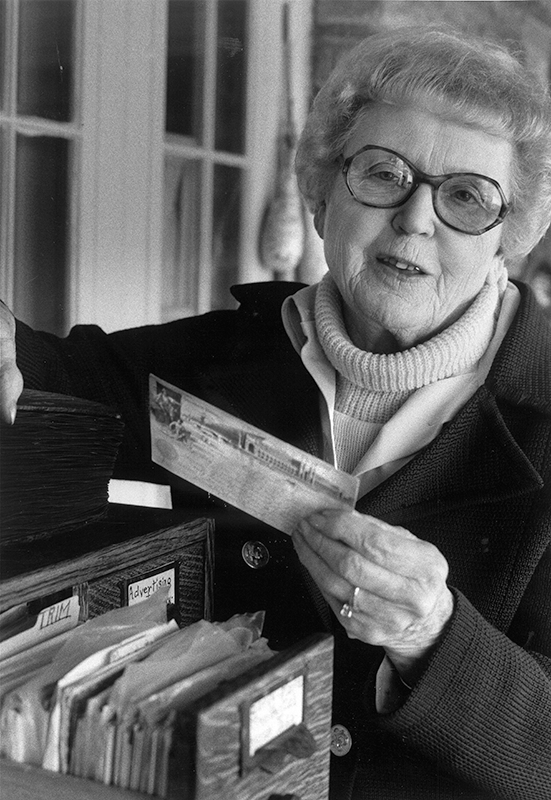 Missouri Valley Special Collections is pleased to announce an update and large addition to one of the first digital history collections made available on KCHistory.org.

Beginning at the age of 72, longtime Kansas Citian and avid postcard collector began writing her “Postcards from Old Kansas City” columns for the Kansas City Times and the Kansas City Star newspapers. For nearly 30 years, Ray would select one of her many postcards and explain its history and significance to her readers.

When she passed away in 1996 at the age of 100, Ray’s extensive postcard collection was left to the Kansas City Public Library, where she had frequently conducted research for her articles over the years.

In the 2000s, over 600 postcards from the Mrs. Sam Ray Postcard Collection were scanned and added to the site. In addition to the postcard images, transcriptions of her articles were included with each record, which have been an invaluable resource for those interested in Kansas City history. While they did offer important glimpses into Kansas City’s past, the poor quality of the original scans made viewing them on the site very frustrating.

Finally, in 2019, MVSC staff members began the long and methodical process of replacing the inferior postcard images with new, high resolution files. In addition, our staff discovered 55 postcard images with articles that were not previously uploaded to the site. Some of the missing postcards display important Kansas City buildings, monuments and street scenes. Records have been created for these images and they are now available to researchers.

Before and after postcard of Union Station during the dedication of the Liberty Memorial, 1921.

Before and after postcard of Main Street, looking north from 12th Street, 1909.

Before and after postcard of aviator Roger Fowler and his dog Bill, n.d.

Before and after postcard of Walnut Street, looking north from 10th Street, ca. 1918.