Post date:
Wednesday, February 27, 2019
Street signs along Kansas City's Paseo Boulevard began coming down in late February, replaced with new ones proclaiming the street’s new name: Martin Luther King Jr. Boulevard. Following a long period of local debate (some of it still ongoing) a mayoral task force, and a measure passed by the city council in October, the iconic roadway is now officially renamed after the civil rights leader.

The street traces its history to the beginning of the city’s adoption of planning and projects associated with the City Beautiful movement toward the end of the 19th century. In 1893, landscape architect George Kessler submitted a report to the city’s Board of Park and Boulevard Commissioners. With that came the birth of Kansas City’s robust system of parkways and boulevards, which connected people to green, natural spaces within the city.

The Paseo was among the notable routes touted in the report. One section read, "The city should have some place where everybody can see beautiful flowers, and flowers more or less rare, in abundance and under conditions of artistic grouping or display. The 'Paseo' offers this opportunity."

Jeremy Drouin, manager of the Library's Missouri Valley Special Collections, explains that Kessler named The Paseo after the "Paseo de la Reforma," a major thoroughfare in Mexico City. Completed in 1899, the boulevard became a source of local pride.

“The Paseo was such an attraction, numerous postcard views were printed of the gardens, fountains, and other scenic features along the boulevard,” Drouin says.

On the occasion of the historic boulevard’s name change, the Library has pulled together a selection of images from the Missouri Valley Special Collections that provide snapshots of The Paseo’s past. 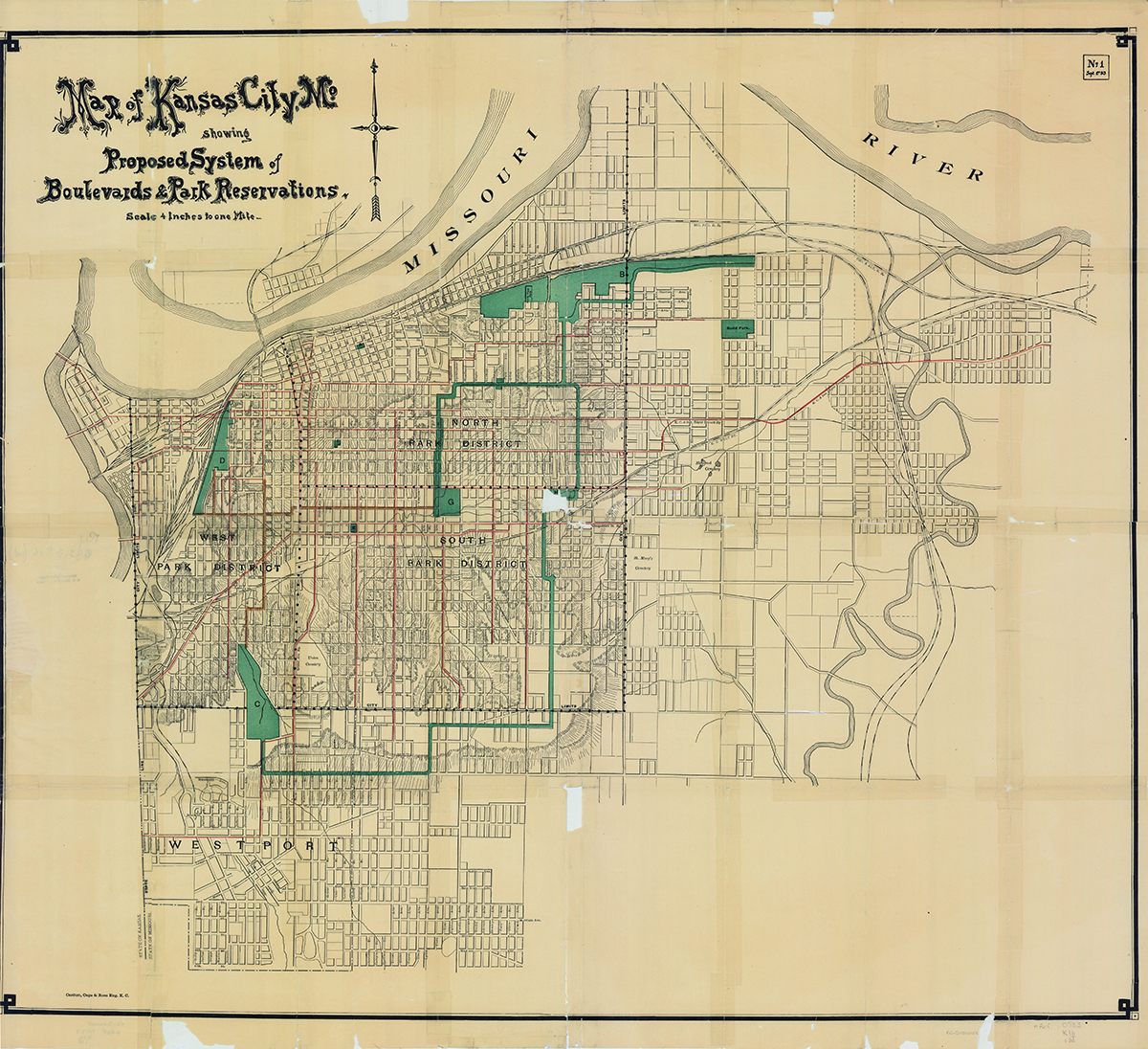 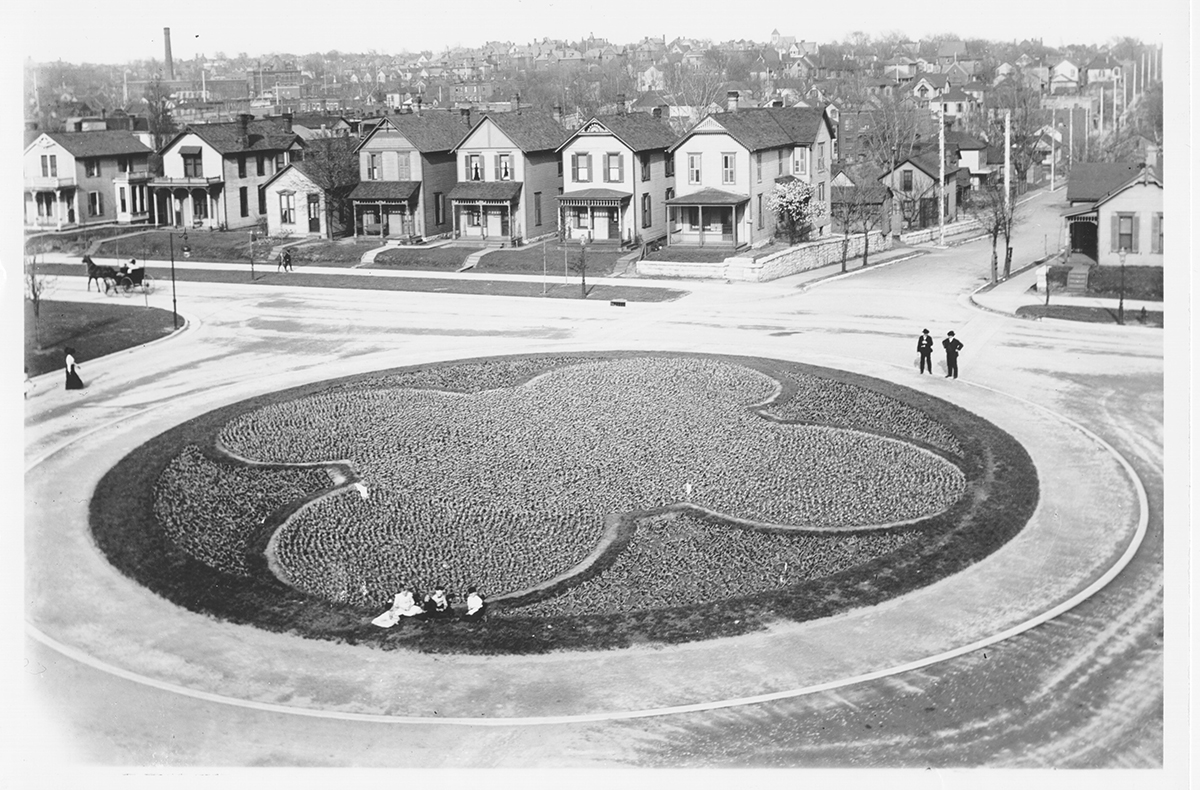 The Paseo from 9th Street to 18th Street was completed in 1899. While many dilapidated houses were removed along the route, others remained providing those residents scenic views of beautiful gardens, such as this one in the traffic circle at 13th Street. 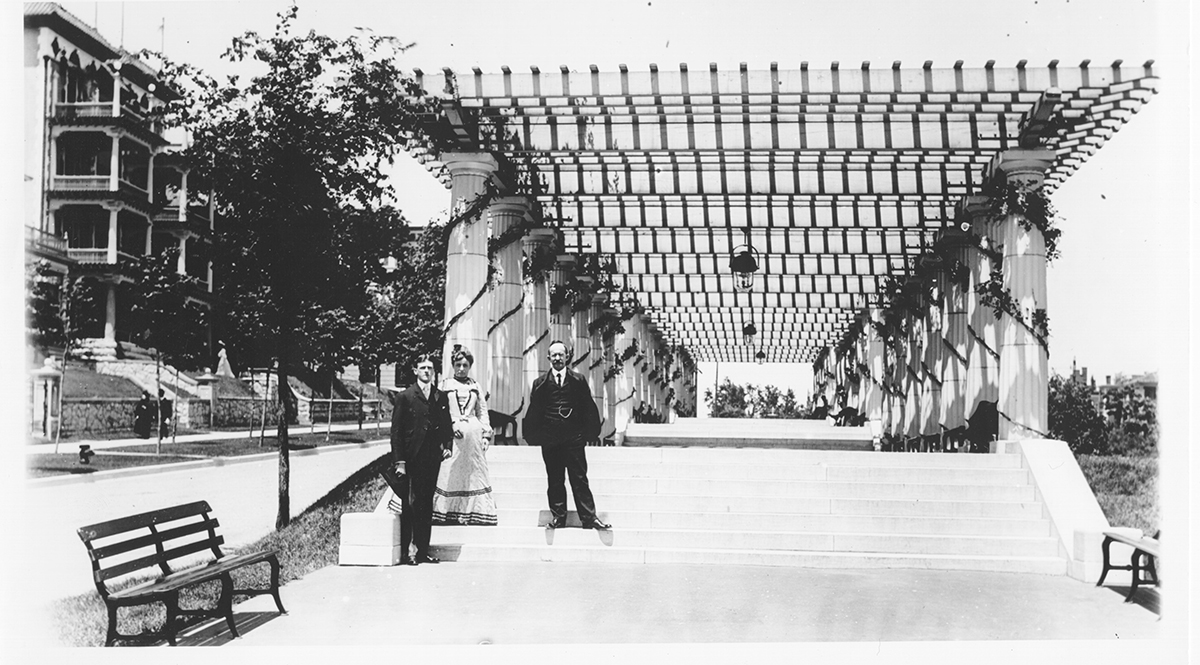 Located on the west side of the median, The Pergola consists of the three terraced levels descending from 10th Street southward towards 11th Street (where there this photo was taken), and a latticed wood roof supported by columns wound with vines. 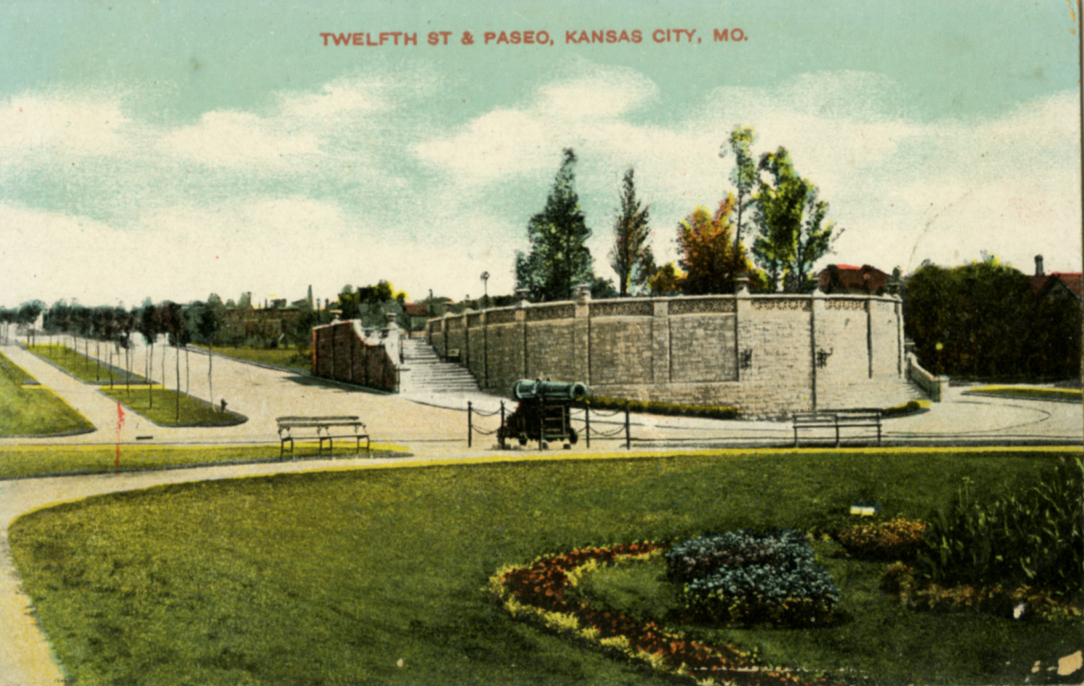 This postcard view, looking north from around 12th Street, shows the Sunken Garden, Spanish Cannon and Terrace, a 19-foot circular retaining wall constructed of limestone. In 1922, the William T. Fitzsimons Memorial Fountain was installed in the south end of the wall. Lieutenant Fitzsimmons, an officer in the U.S. Army’s Medical Reserves Corps., was the first American officer to die in World War I. 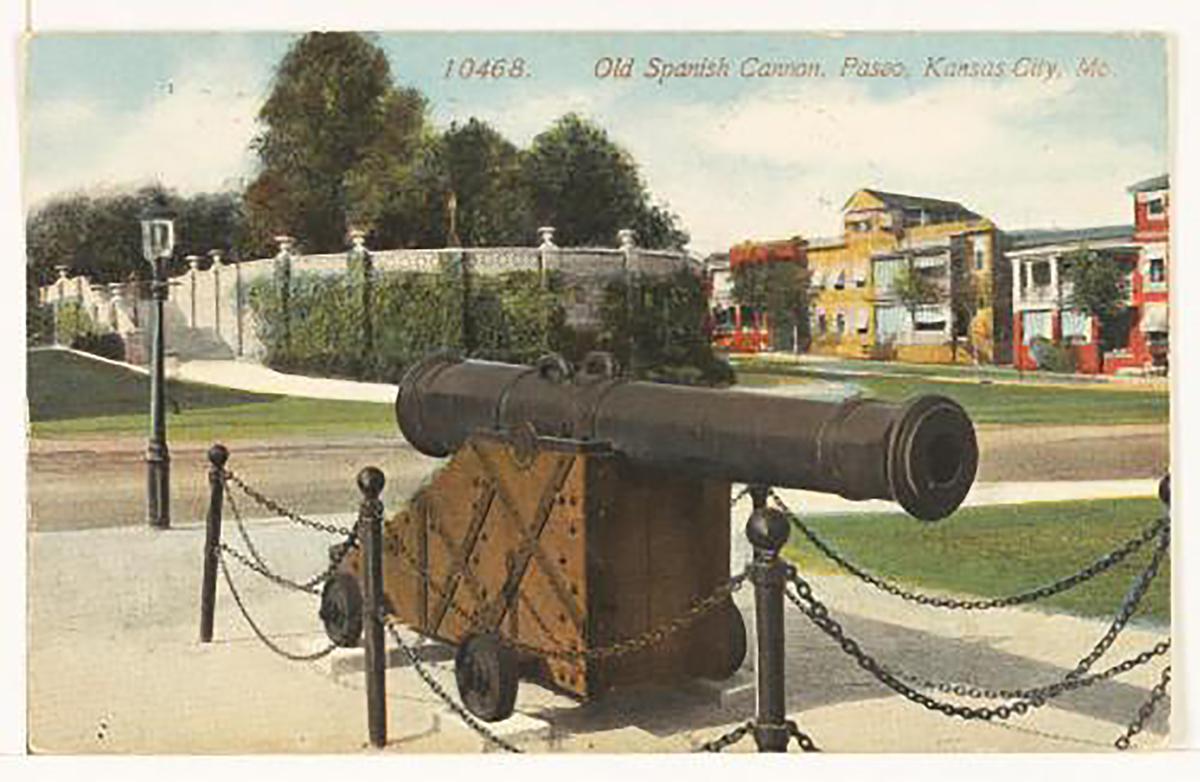 The old 11-foot-long Spanish cannon, cast in Seville, Spain, in 1865 from 6,500 pounds of bronze, with the crest of Spain inscribed near the breech and the words Sancho El Bravo inscribed near the muzzle, was a gift from the United States government to the Kansas City Board of Park Commissioners Aug. 22, 1899. The cannon had been captured by the U.S. Navy the year before during the Spanish-American war, in the battle of Santiago. For years, every evening at sunset, it had been fired in a ceremony in Santiago. After its presentation to Kansas City several locations were suggested for its placement: 15th and the Paseo, Gladstone Boulevard near Scarritt Point, 12th and the Paseo, and 9th and the Paseo. It was placed at 12th and the Paseo, as shown on the old post card, at the north end of the colorful sunken flower gardens and was pointed south. The fashionable Paseo had just been completed as far south as 17th. 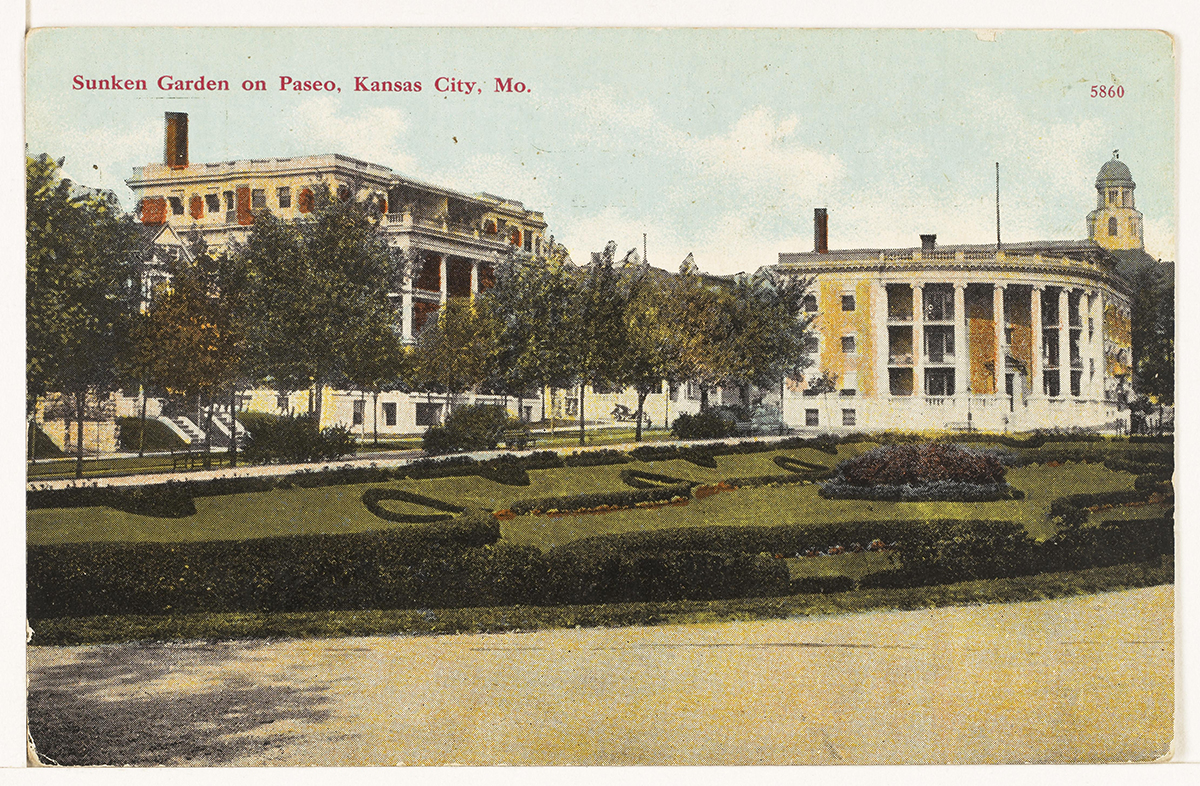 The New York apartments at the northwest corner of 12th and the Paseo, shown at the right side of the post card, served a quality clientele early in this century, and the sturdy building with the rounded facade and eight tall Ionic columns became a landmark. This apartment house was one of the four pictured in Emery-Bird-Thayer's 24-page 1908 brochure extolling the beauty spots and accomplishments of Kansas City at the time. (Other apartments pictured were the Elsmere, the Eleanor and the Maryland.) In the foreground are the carefully landscaped sunken gardens of the park board, their pride, as was all of the Paseo, Kansas City's finest and longest of the boulevard system. The church dome seen in the background, is that of the newly finished central Methodist Church at 11th and the Paseo. It seated 2,500 persons and was one of the largest and best-equipped in the city. 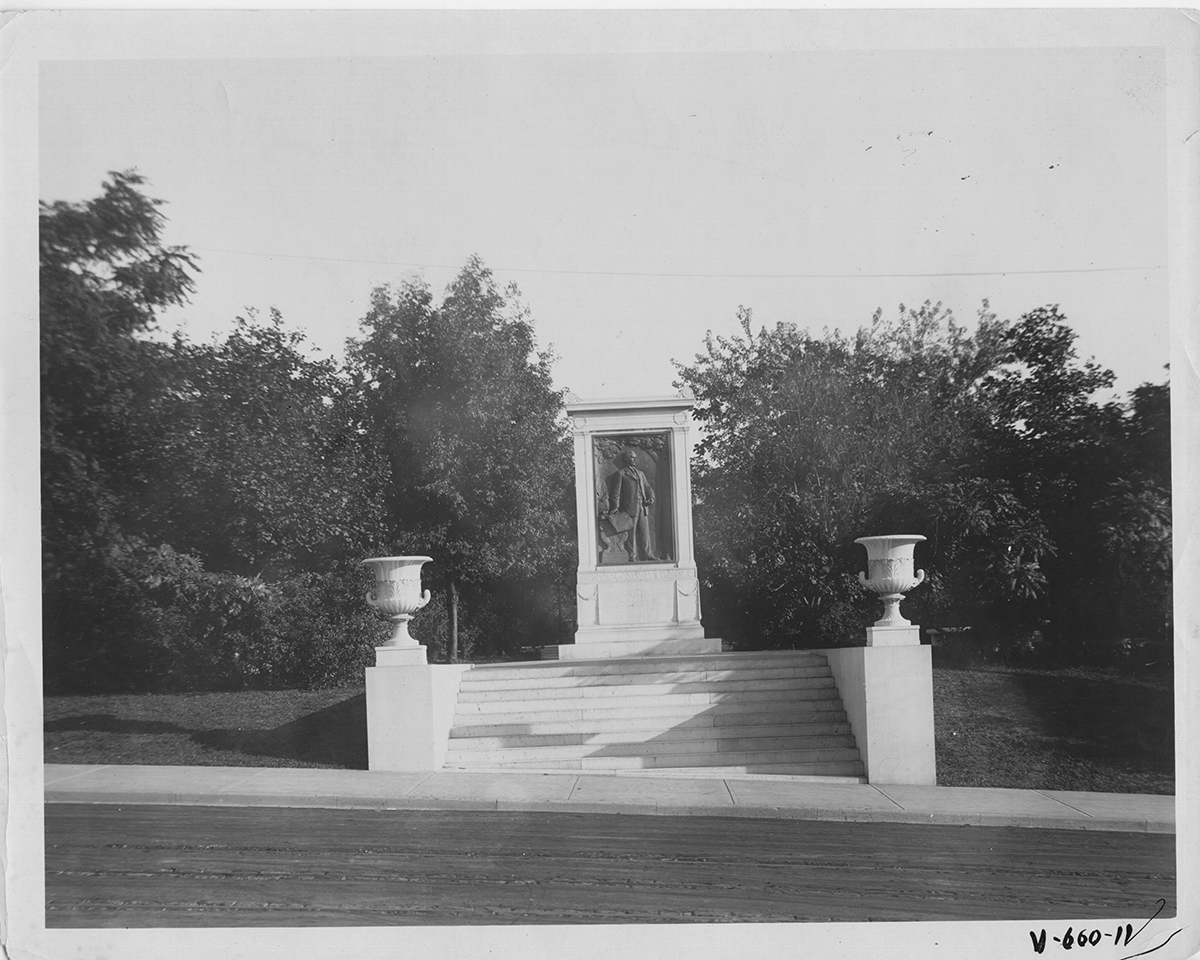 August R. Meyer, a nature enthusiast with a fortune made in mining and smelting before coming to Kansas City, was president of the park board from 1892 to 1901. One of his ambitions was construction of a grand boulevard equal to the Paseo in Mexico City. His knowledge of the design of European cities made him a leader in the early KC parks movement. He even hired experts with his own funds to come to Kansas City.

Meyer – also the namesake of Meyer Boulevard – was honored by the Kansas City Commercial Club through this memorial, dedicated in 1909 and the first to be placed in Kansas City parks. The inscription carved on the monument beneath the bronze tablet reads as:

In memory of August Robert Meyer, First President of Park Commission of Kansas City.
On the opposite side of the memorial:
Houses and shops are man’s
But grass and trees and flowers
Are God’s own handiwork.
Undaunted this man planned and toiled
That dwellers in this place might ever
Freely taste the sweet delights of nature. 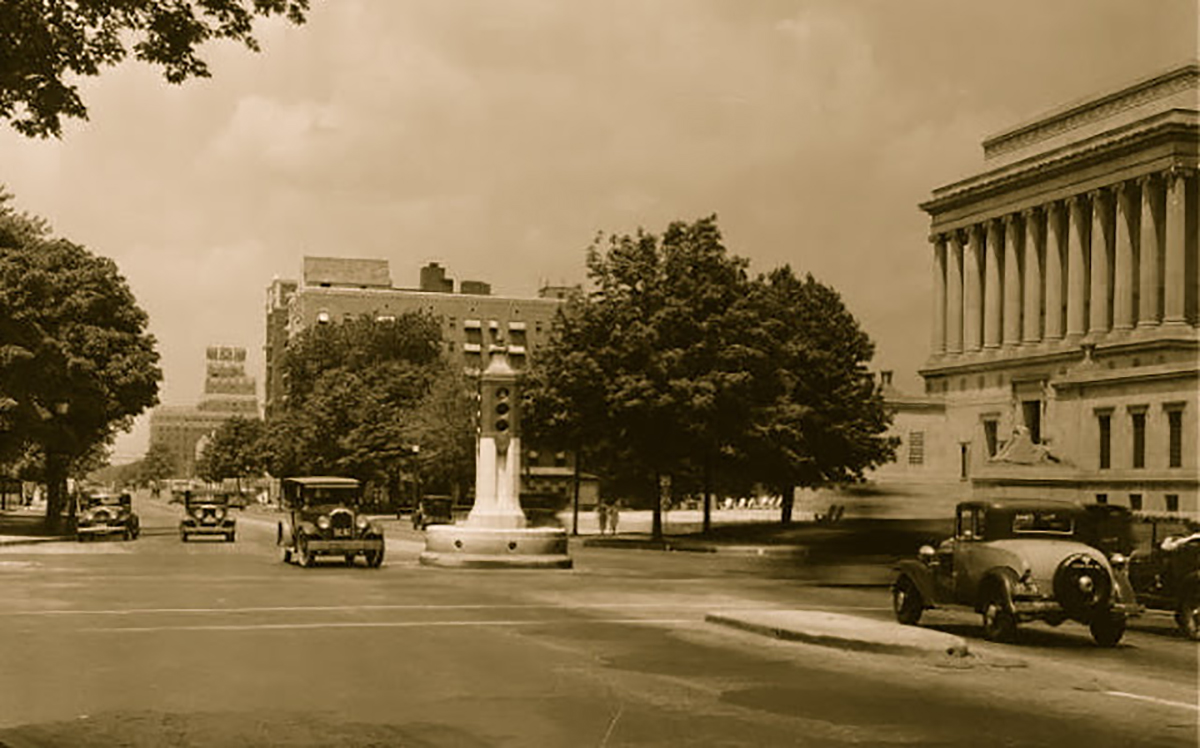 Looking west on Linwood Boulevard, a traffic signal sits at The Paseo intersection. The 17-foot traffic light was designed by Country Club Plaza architect Edward Delk and installed in the 1920s. The Scottish Rite Temple (pictured on the right) and traffic signal island are still located at that intersection today. 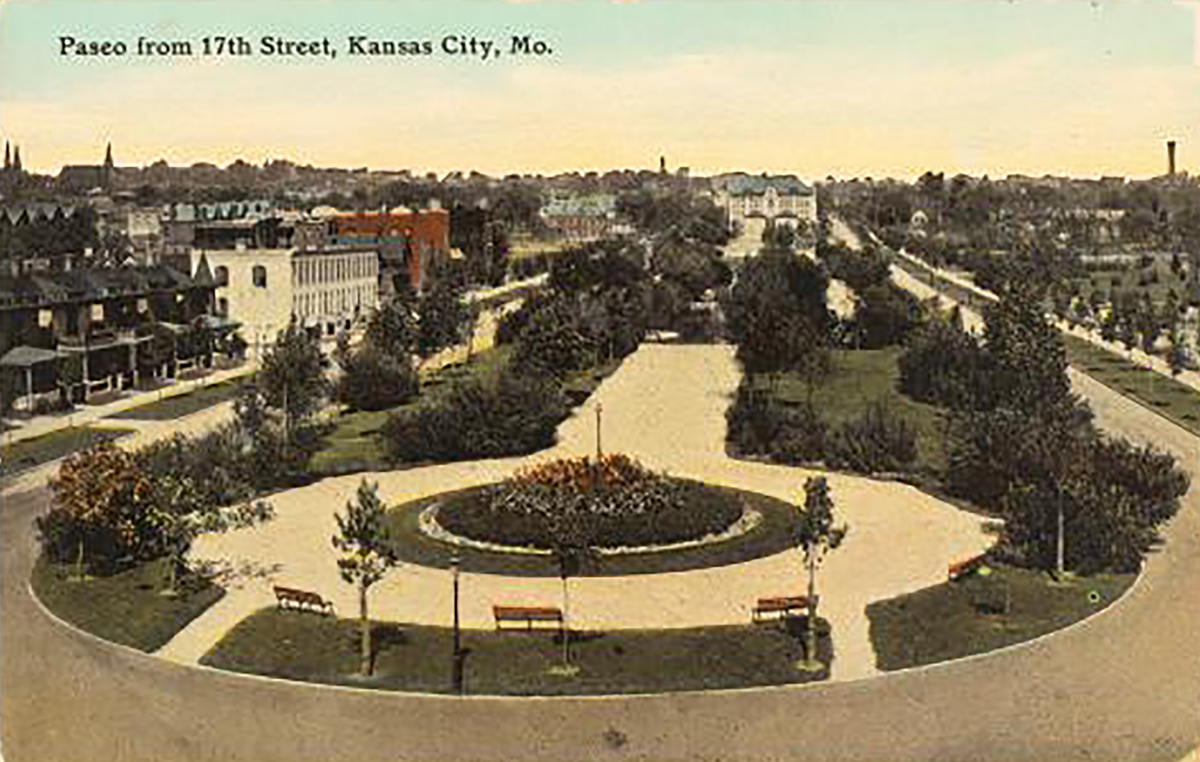 The broad, tree-lined double roadway with narrow interior parks was completed from Admiral to 17th in 1899. By 1919 it had been extended far to the south. On Sunday outings Kansas Citians in carriages traveled along the boulevard, viewing the colorful plantings in the sunken gardens, the fountains, pergolas and playgrounds. (via Missouri Valley Special Collections). 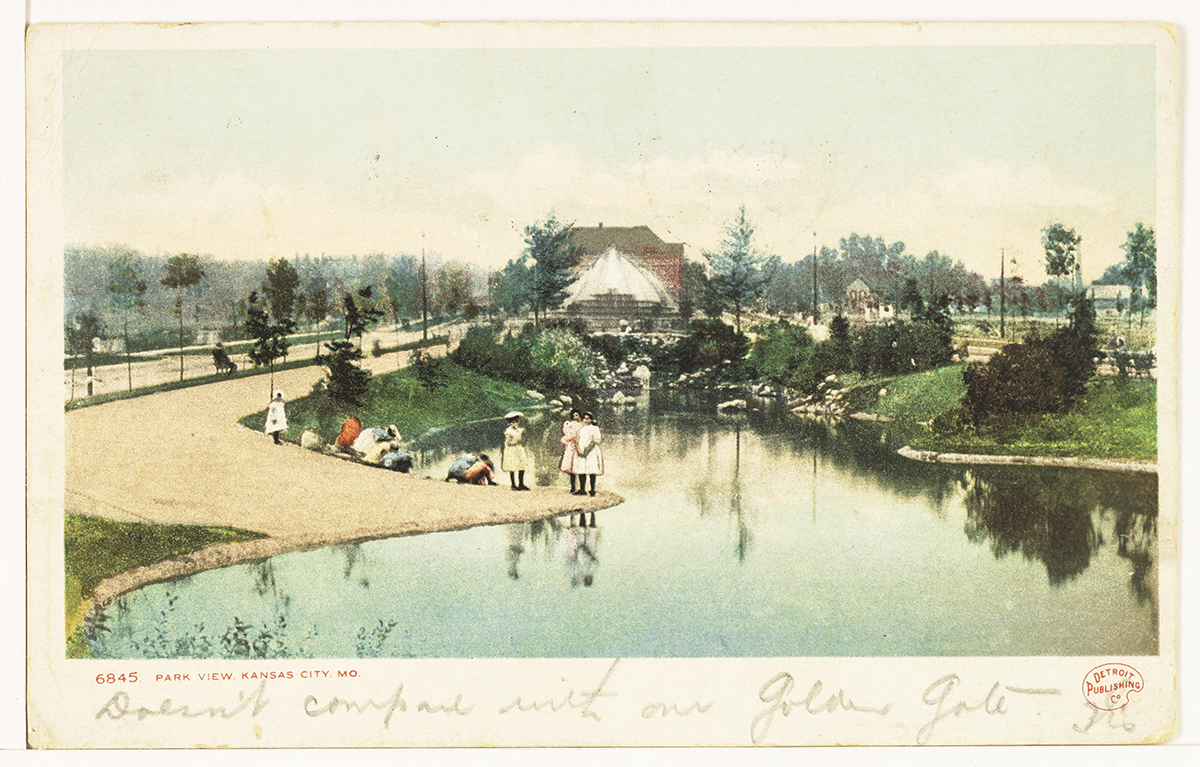 The nicely balanced picture of lade, fountain school and homes was taken in 1906 in a sparely inhabited neighborhood on the Paseo, looking north from Seventeenth street. Beyond the lake is Chace school, built in 1881 on the site of an earlier school, in the center of what was later the Paseo. The school was named for Charles A. Chace, school board member mayor of Kansas City in 1880, and a founder of Provident association. The lake was drained in 1907, and later filled and covered with shrubs and flowers by the park board. The school was razed in 1913. Today the support, approaches and exits of elevated I-70 dominate the scene, as it bridges the Paseo, and traffic races east and west. Kansas City Star, September 14, 1968. 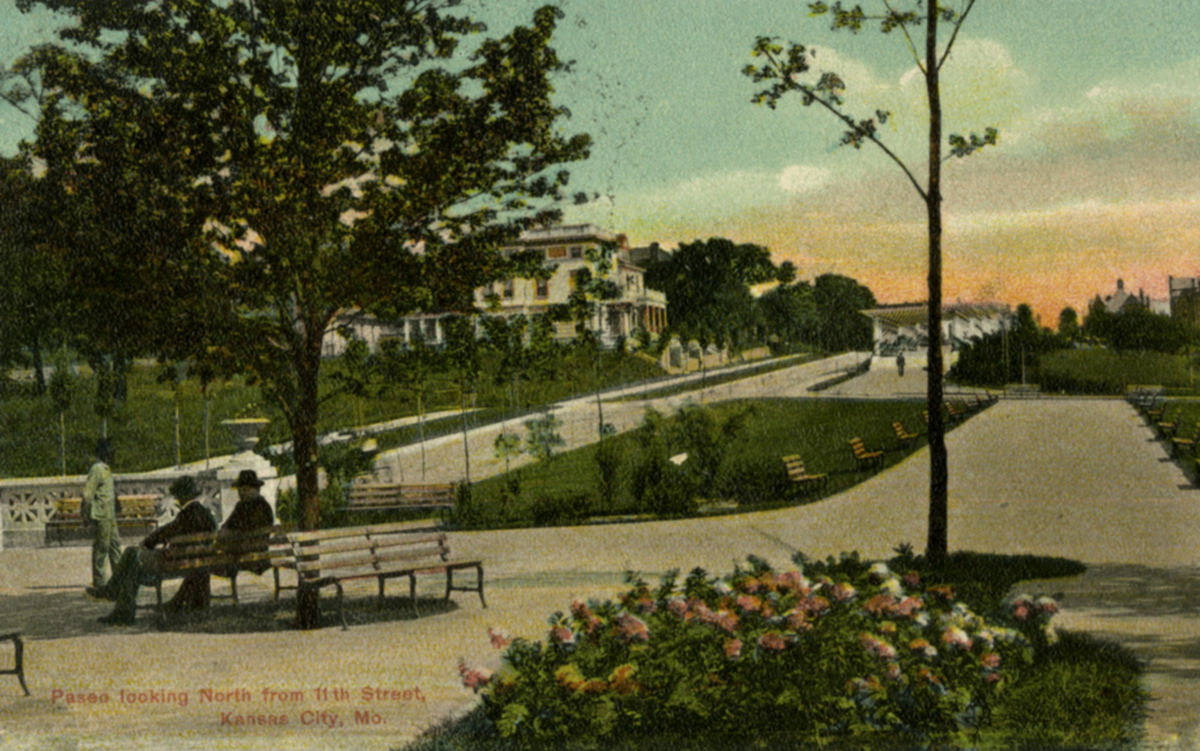 Park benches along the stretch of The Paseo between and 11th and 12th streets provided an excellent vantage for relaxing and watching passersby. From this view looking north, the Pergola can be seen in the distance. 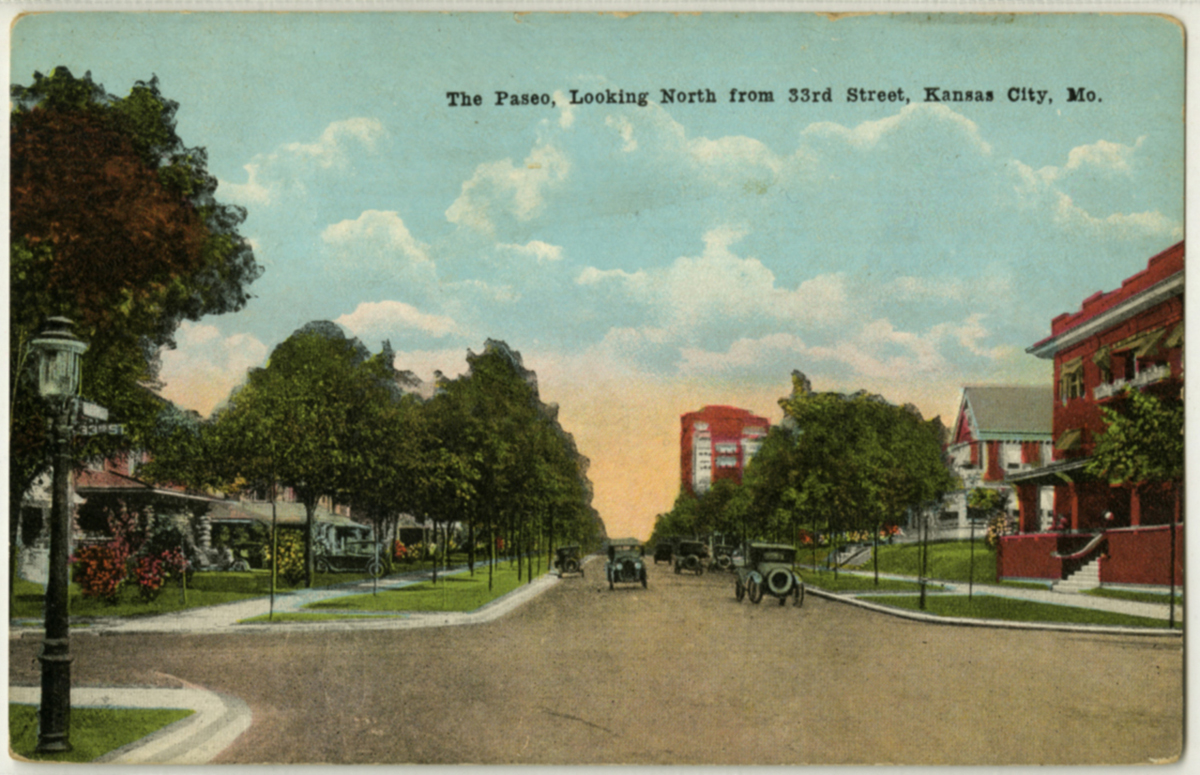 The Paseo from Armour Boulevard to 47th Street—lined with elegant apartments and homes—was acquired in 1906. However, the stretch of road shown in this postcard was not completed until 1914. The St. Regis Hotel at Linwood Boulevard and The Paseo is seen in the distance. In the foreground, a northbound automobile passes the Princeton Hotel on the right. 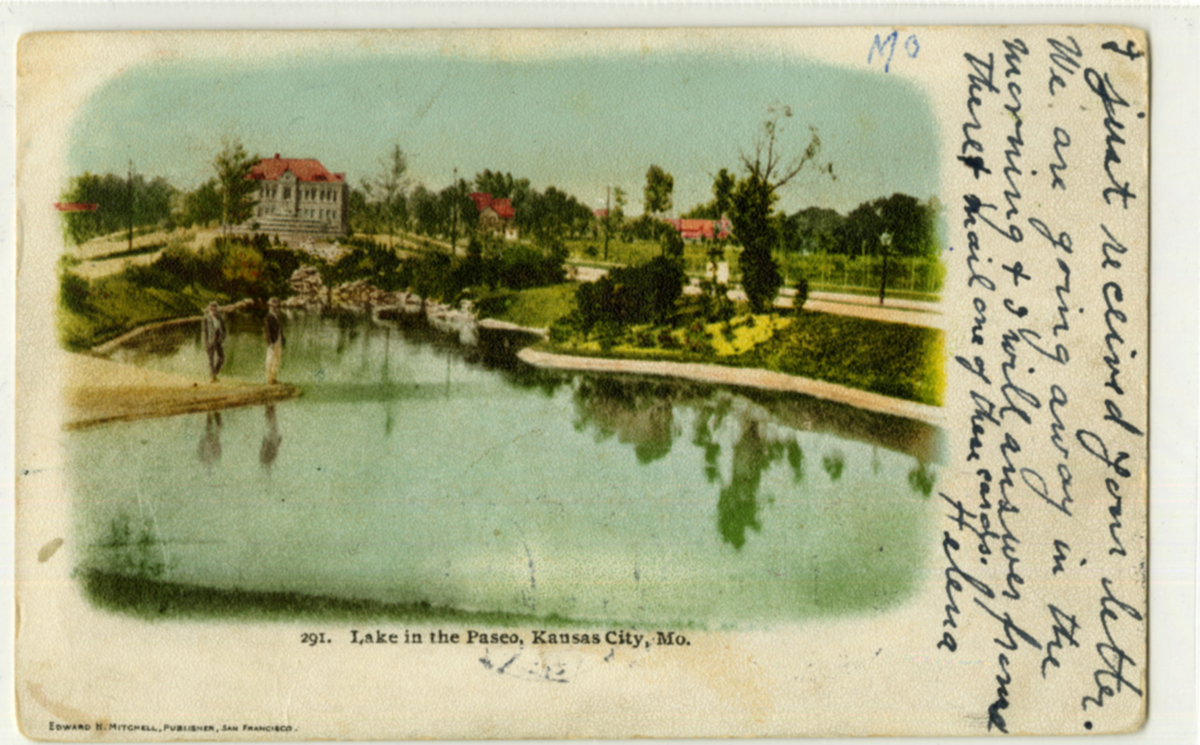 A motorist traveling on the Paseo today finds it difficult to believe so large a body of water as that pictured once occupied the center of this busy thoroughfare. Paseo Lake was drained in 1907. 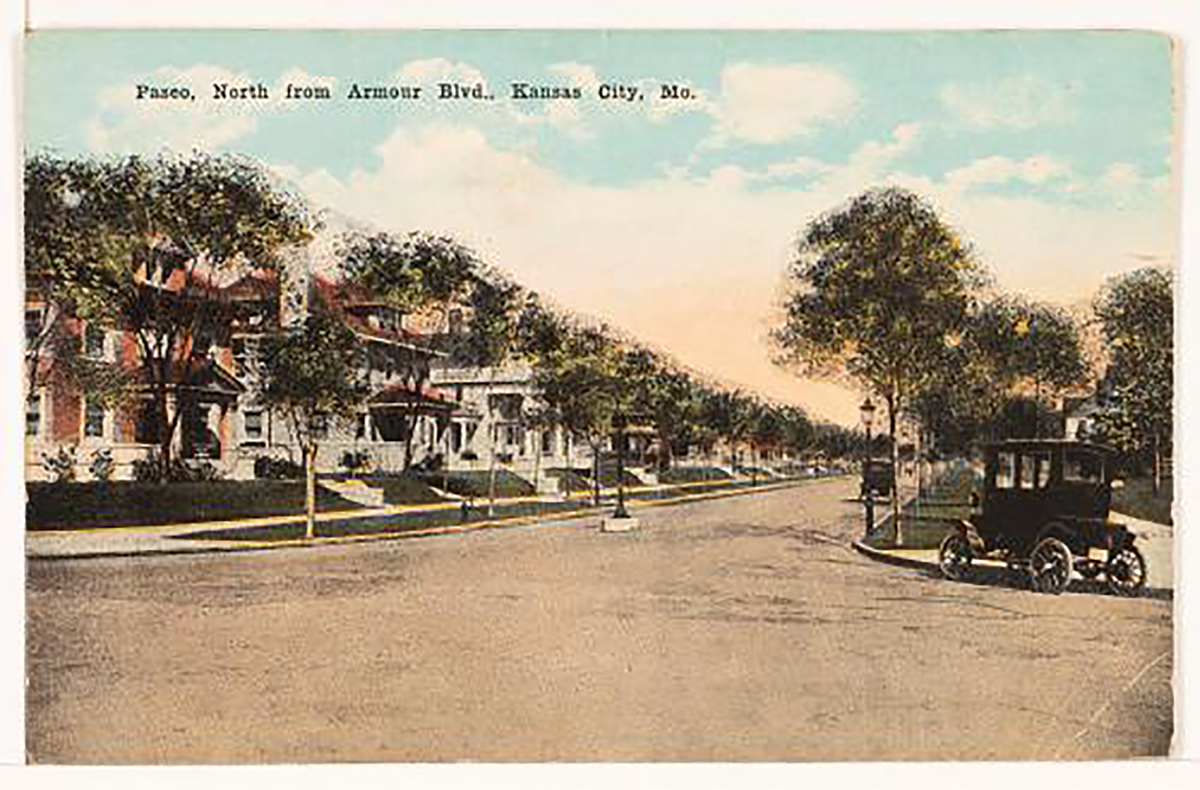 A 1915 postcard pictures the tree-lined Paseo, looking north from Armour. One of the popular new electric cars is parked nearby. This was a fashionable new residential district in 1905 when Hans Dierks chose a site at the northwest corner to build his massive 3-story, 16-room brick home. (via Missouri Valley Special Collections)