The H&R Block Business & Career Center, a valuable resource for local entrepreneurs, small business owners, job seekers, nonprofit managers, and others looking to improve their financial literacy, has anchored the third floor of the Kansas City Public Library’s downtown Central Library for nearly a decade. Bloch – through a $600,000 grant from H&R Block Inc. and the H&R Block Foundation – made it happen.

The Library joins the Kansas City community in saying a fond, grateful goodbye to an icon, one of the city’s greatest entrepreneurs and philanthropists. Bloch, who co-founded H&R Block in 1955 and helped build it into the world’s largest tax preparation company, died Tuesday, April 23, 2019. He was 96.

“Henry Bloch was one of the best citizens this city has ever had,” says the Library’s director, Crosby Kemper III. “He was a friend of this library. He was also a personal friend. He was decent, he was kind, he was thoughtful, and he treated everyone he met with respect and generosity.

“In every way he always gave more than he received.” 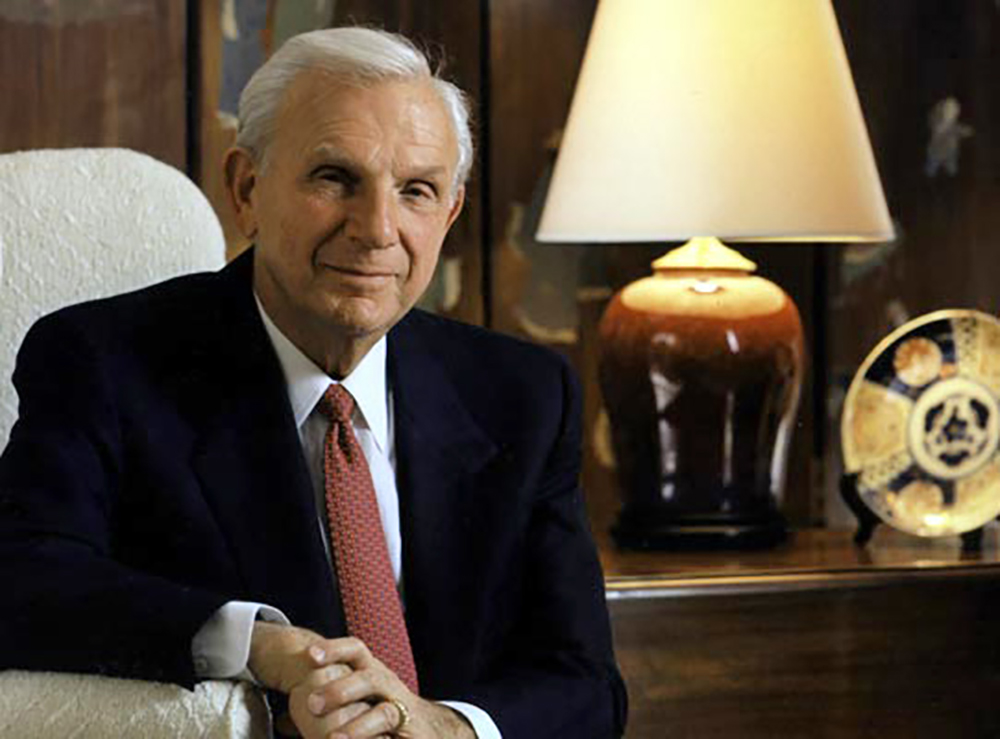 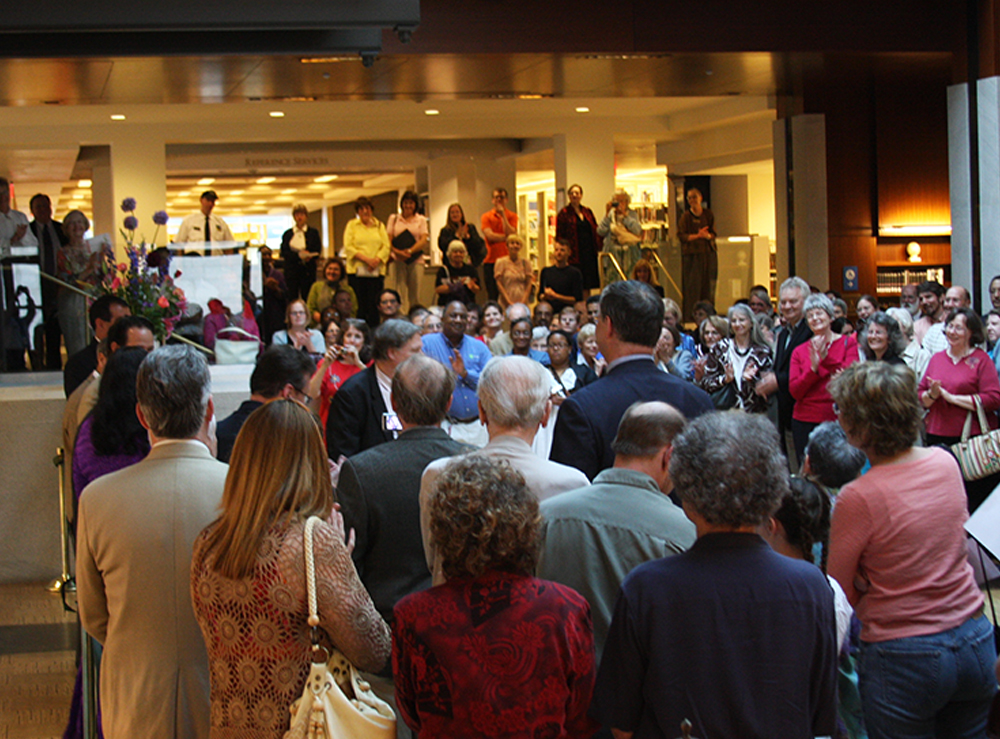 Opening of the Library's H&R Block Business & Career Center in 2009.


The Central Library’s 2,800-foot Block Business & Career Center opened in June 2009. Bloch also became a presence in the Library’s signature programming, speaking the night of that opening and four times since then. Those appearances underscored the affection that Kansas City held for him.

At his last appearance in March 2017, when Bloch discussed his memoir Navigating a Life: Henry Bloch in World War II, he drew an audience of 350 people. The time before that, in March 2015, he and two fellow members of the Greatest Generation – Ed Matheny and Bill Dunn Sr. – spoke to a standing-room-only crowd of 652.

Born July 30, 1922, Bloch was the second of three sons of a prominent Kansas City attorney. He attended Southwest High School, earned a Bachelor of Science degree from the University of Michigan, entered the Air Force, and flew 31 World War II combat missions as a navigator on B-17 bombers. He was awarded the Air Medal and three Oak Leaf Clusters.

He and brother Leon Bloch opened the United Business Company in the late 1940s, offering bookkeeping and other services to small businesses. Leon later left, and the third brother, Richard, came aboard. H&R Block grew out of a simple 1955 advertisement for tax preparation services, and by 1978 was preparing more than one of every nine returns filed in the U.S.

Henry Bloch was the face of the company in TV commercials for more than 20 years. He retired as board chairman in 2000.

He married the former Marion Helzberg in 1951, and they had four children: Robert, Thomas, Mary Jo, and Elizabeth Ann.

Learn more about the legacy of Henry Bloch at RememberingHenryBloch.com.

A Conversation with Henry Bloch

The chairman emeritus of H&R Block discussed how the entrepreneurial start-up he and  his brother Richard co-founded in Kansas City in 1955 grew to become the world's largest tax services company.

Father and son Henry and Tom Bloch discussed the younger Bloch's book Many Happy Returns: The Story of Henry Bloch, America’s Tax Man, which covered the founding of H&R Block and explained how the company transitioned from a Kansas City-based bookkeeping business to the “Nation’s Largest Income Tax Service” 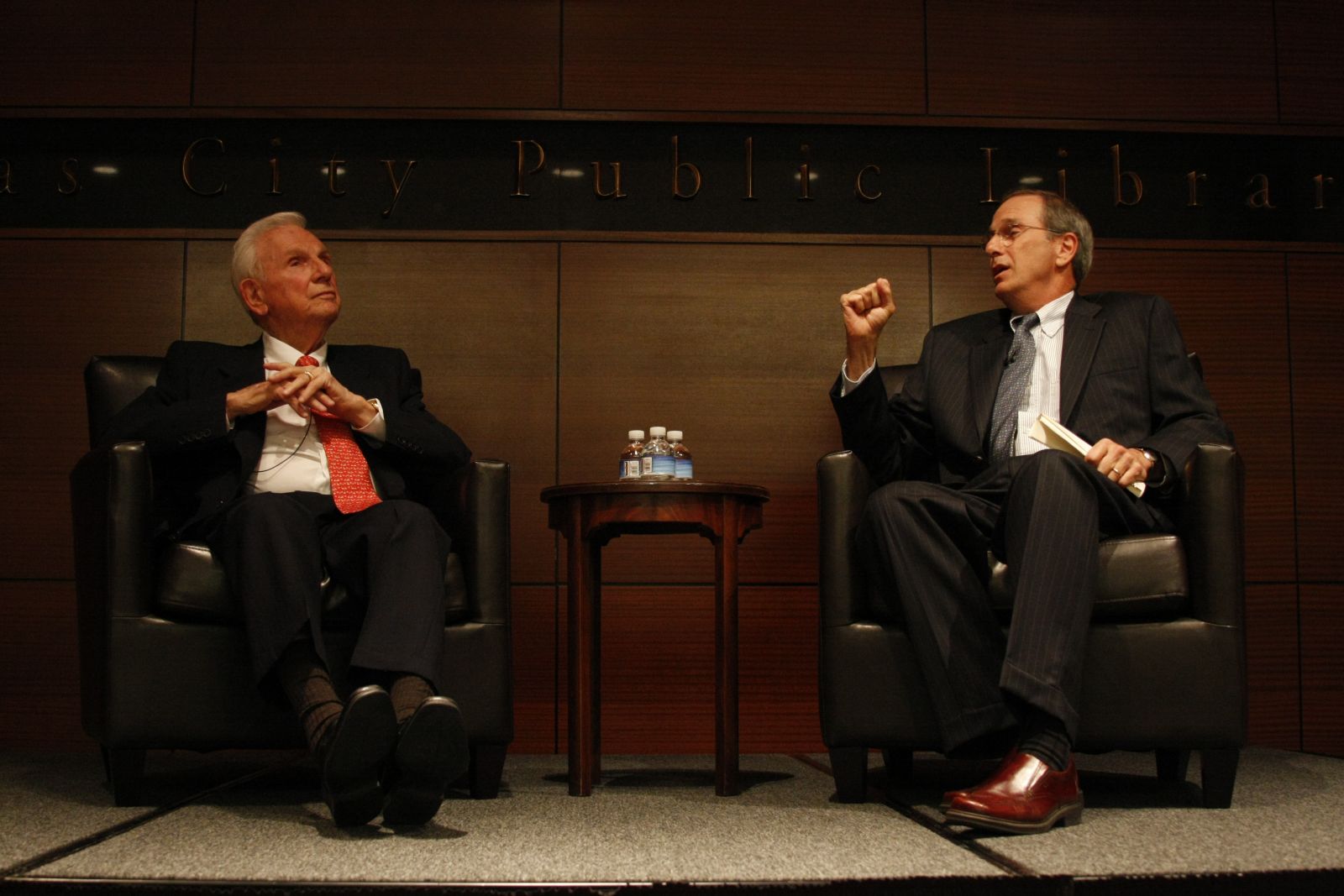 Henry Bloch sat down with his son, Tom Bloch, for a conversation covering seven timeless lessons for entrepreneurs gleaned from his experiences. The presentation was held in conjunction with Global Entrepreneurship Week and the paperback release of the younger Bloch’s 2010 book Many Happy Returns: The Story of Henry Bloch, America’s Tax Man.

Time magazine editor-at-large David Von Drehle interviewed three of the city’s most recognizable World War II veterans. Civic giants Henry Bloch, Edward T. Matheny Jr., and Bill Dunn Sr. were barely out of their teens when they rallied to the cry of “Remember Pearl Harbor." Seventy years after the war's end, they shared their personal stories and reflected on the leadership of President Harry S. Truman, their hometown commander-in-chief. 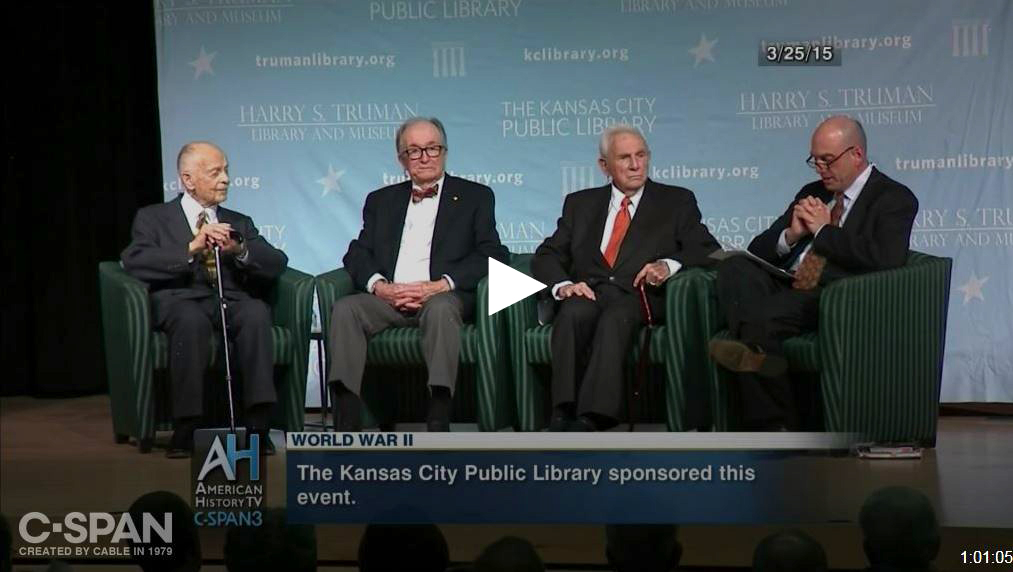 Before embodying the American dream – co-founding H&R Block and building it into the world’s largest tax preparation company – Henry W. Bloch helped define our country’s Greatest Generation. The native Kansas Citian enlisted in the Army Air Corps in the wake of the Japanese bombing of Pearl Harbor, and flew 32 World War II combat missions as a navigator on B-17 Flying Fortress bombers.

Bloch detailed his experiences in his memoir, Navigating a Life: Henry Bloch in World War II. Celebrating its release, he and one of its co-authors, University of Missouri-Kansas City history professor John Herron, discussed the book and how Bloch’s wartime exploits helped shape him as a businessman. 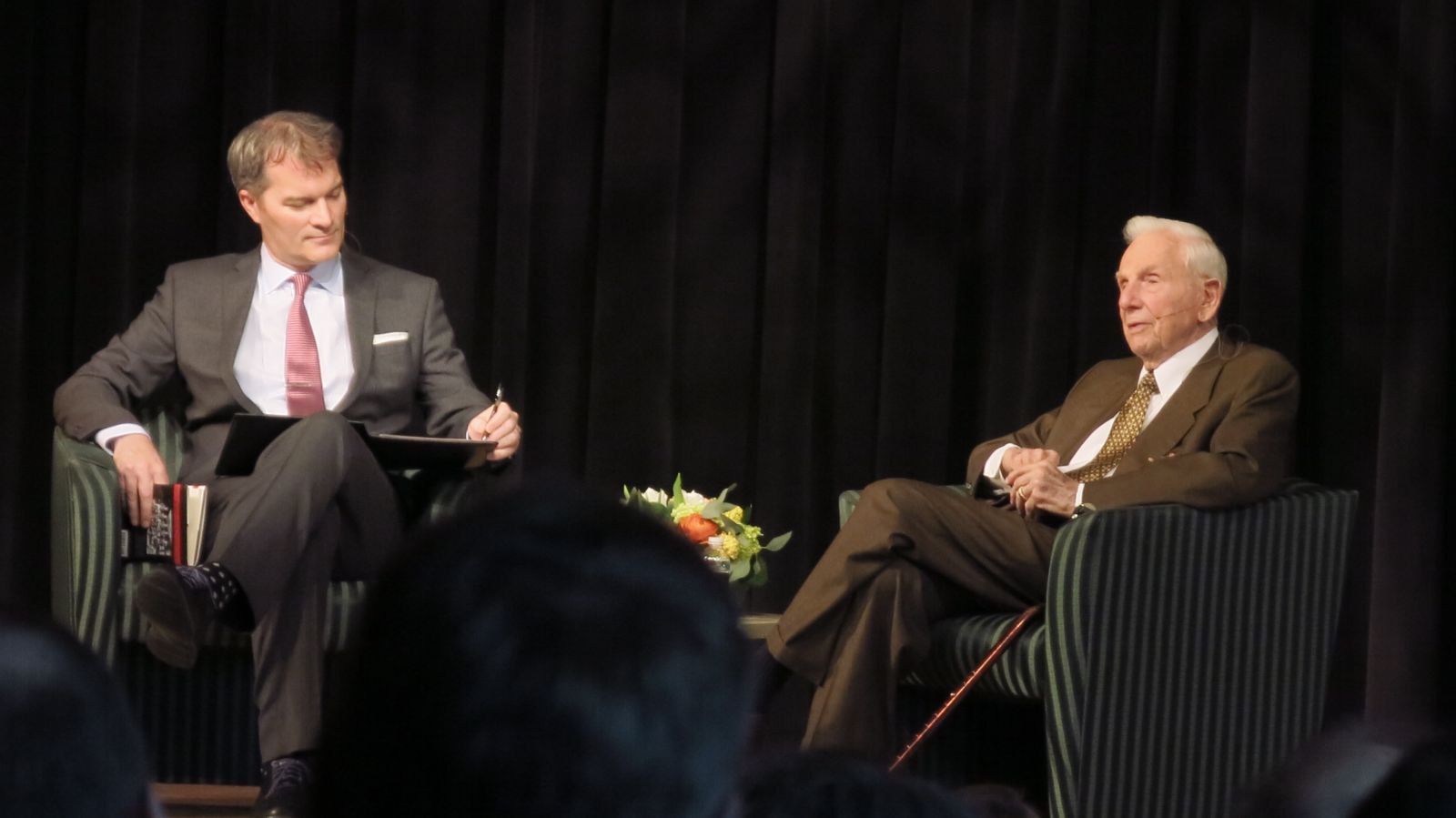 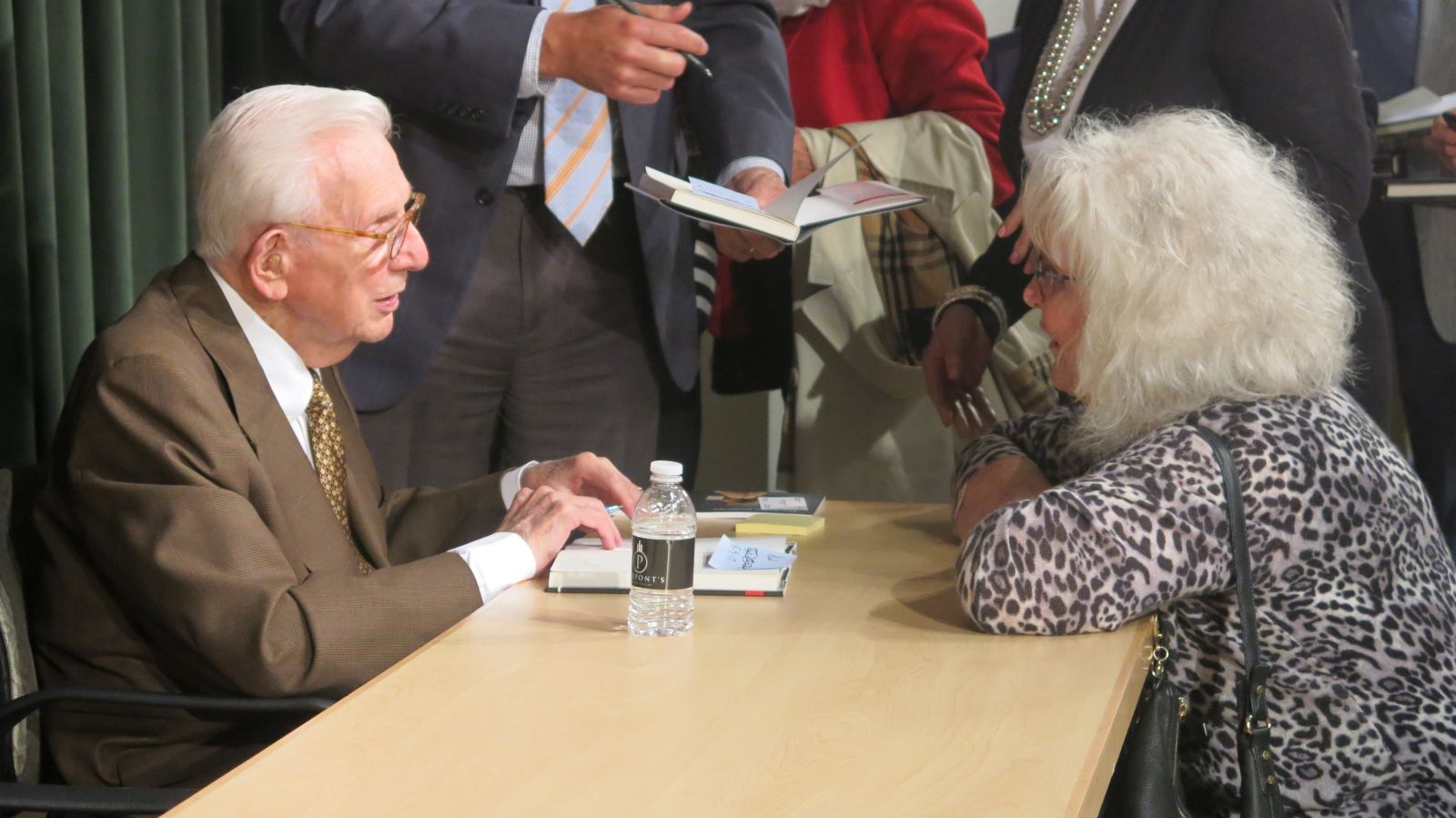