“What’s your KC Q” is a joint project of the Kansas City Public Library and The Kansas City Star. The purpose is to help Kansas Citians become more knowledgeable and informed citizens.

This installment of “What’s Your KCQ” is a story of gambling, gangsters, and geography.

Reader William Renegar wanted to know, “Was there once a gambling establishment on Southwest Boulevard on the state line that was part in Kansas and part in Missouri?” There’s a story in his family about a relative, Fred Renegar, who supposedly ran a saloon on the state line before he was killed by the mob over an unsettled debt. His murder was never solved. William Renegar wondered if there was any truth to it.

A Tale of Two Taverns

Today, the state line runs through the intersection of Southwest Boulevard and 31st Street, cutting through the QuikTrip to the south of the intersection. But things looked a little different a century ago, when 31st Street didn’t extend to Southwest Boulevard. It hit Bell Street, which led to the boulevard and its plethora of lumber yards, construction companies, garages, a brewery, and oil companies and other industrial concerns – along with the occasional restaurant, lunch counter, and saloon or tavern. 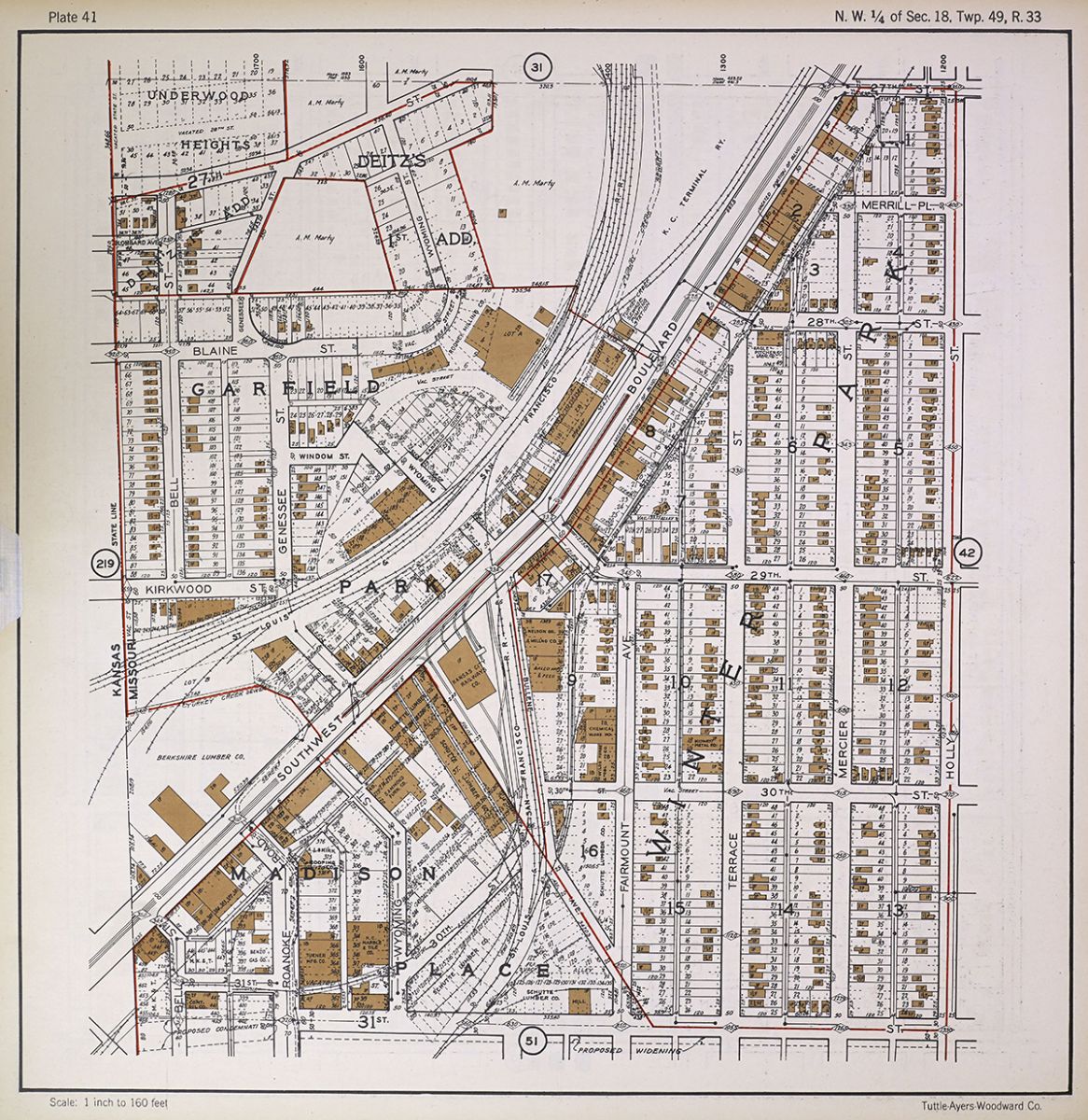 A survey of early 20th century Sanborn Fire Insurance maps, city directory listings, and newspaper articles identifies two buildings on the state line that housed taverns. One, the Last Chance Tavern (or Saloon) was on the south side of the street at 3205 Southwest Blvd. On the north side at 3130 Southwest Blvd., was the State Line Tavern. 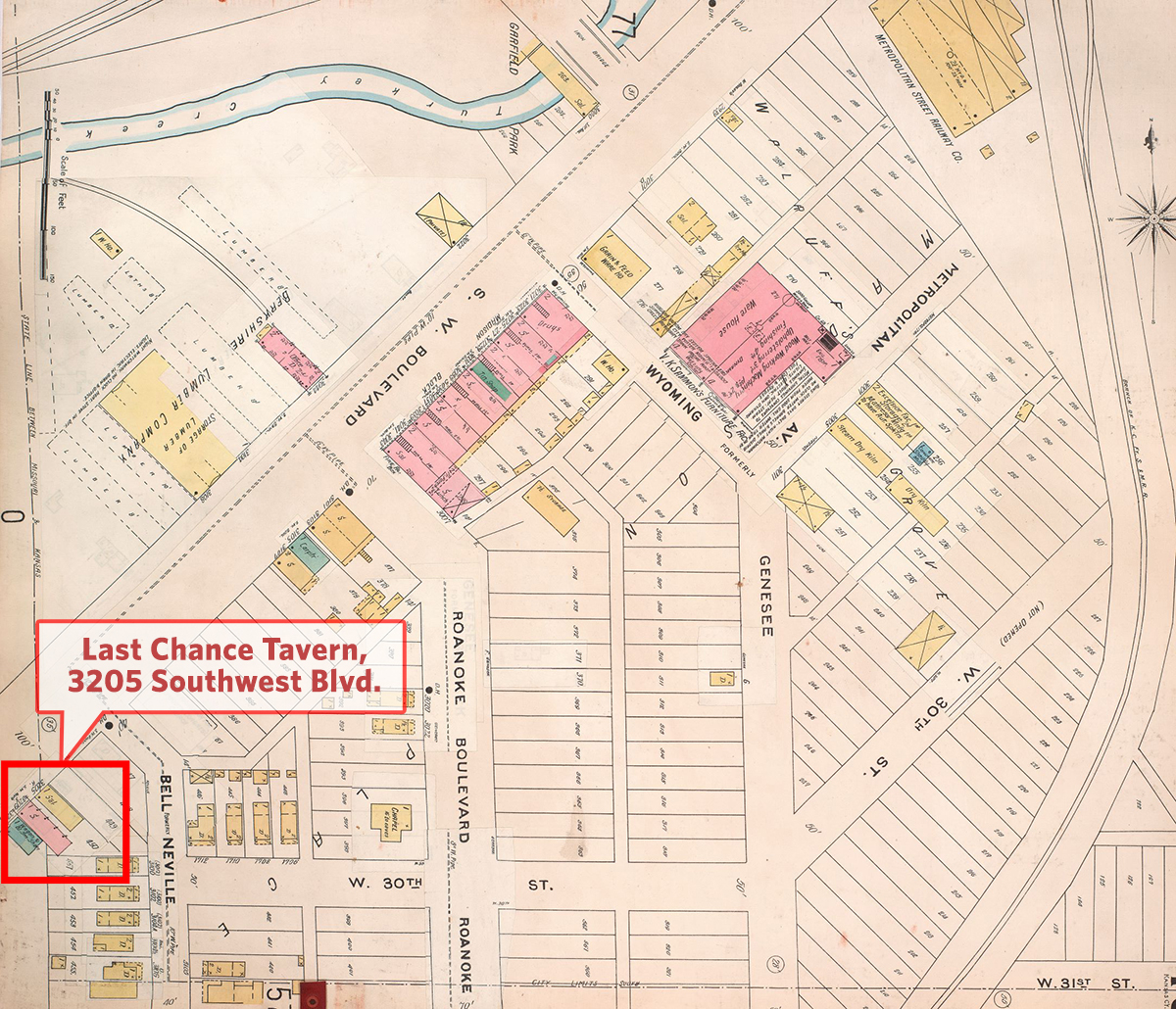 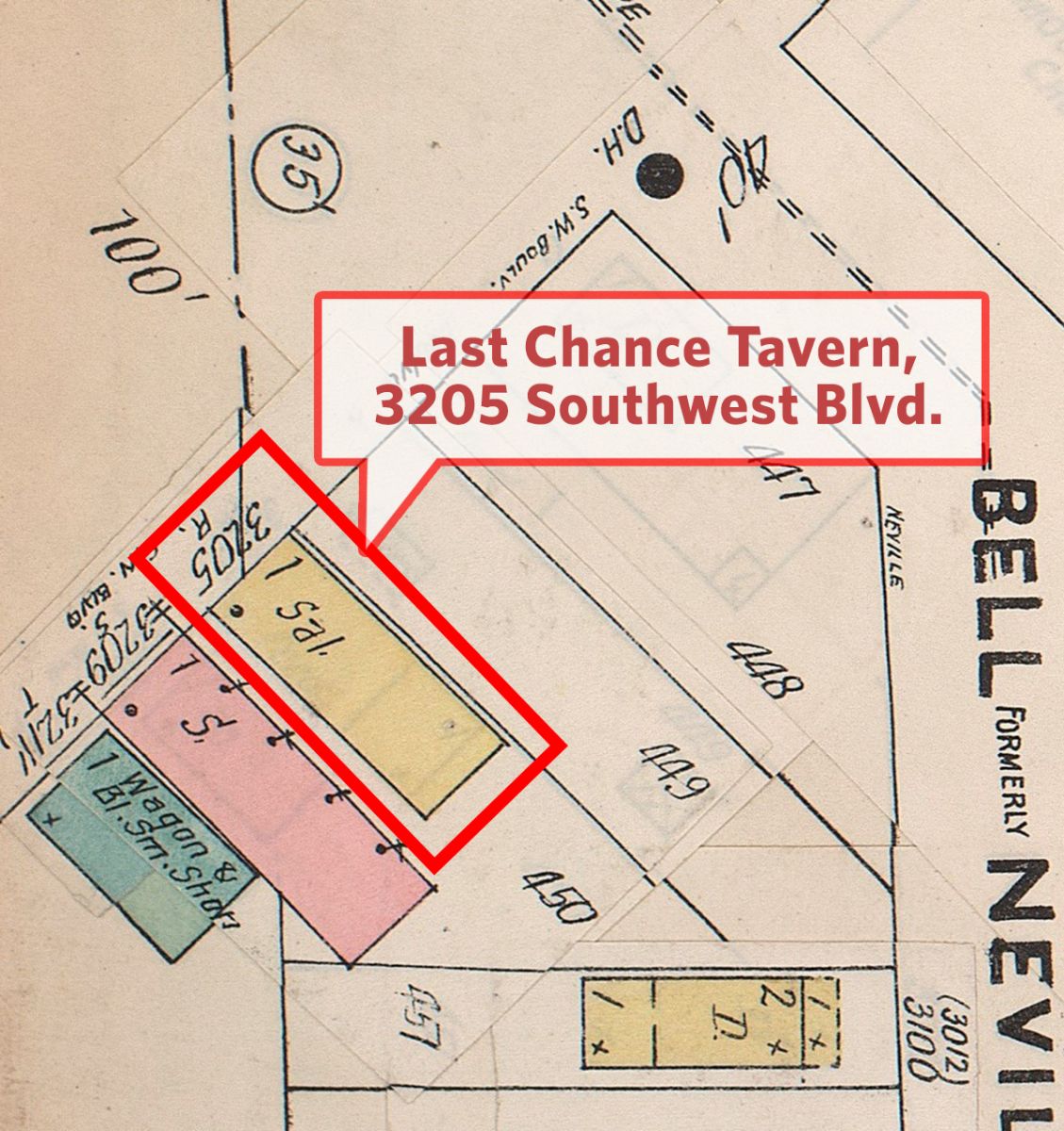 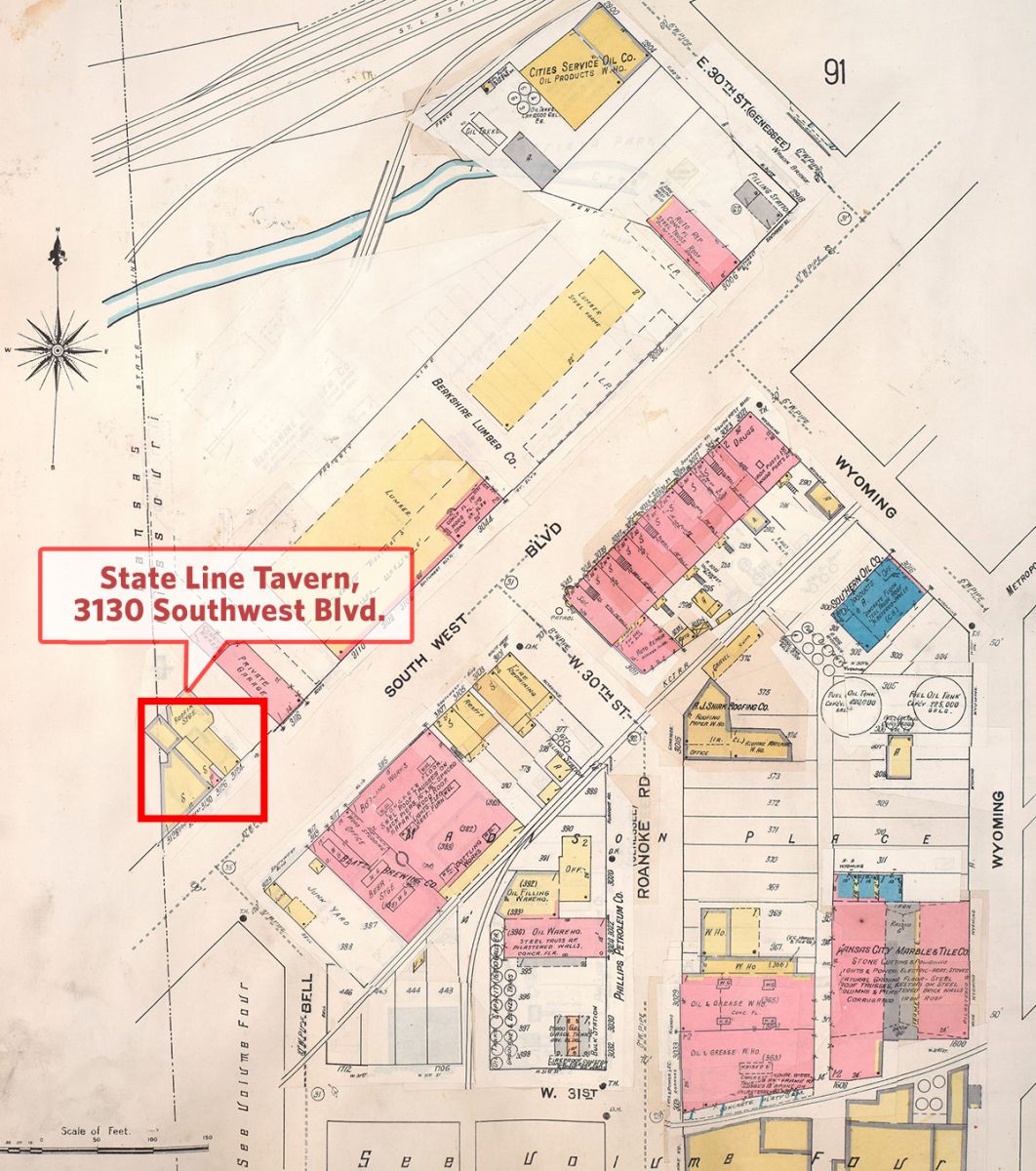 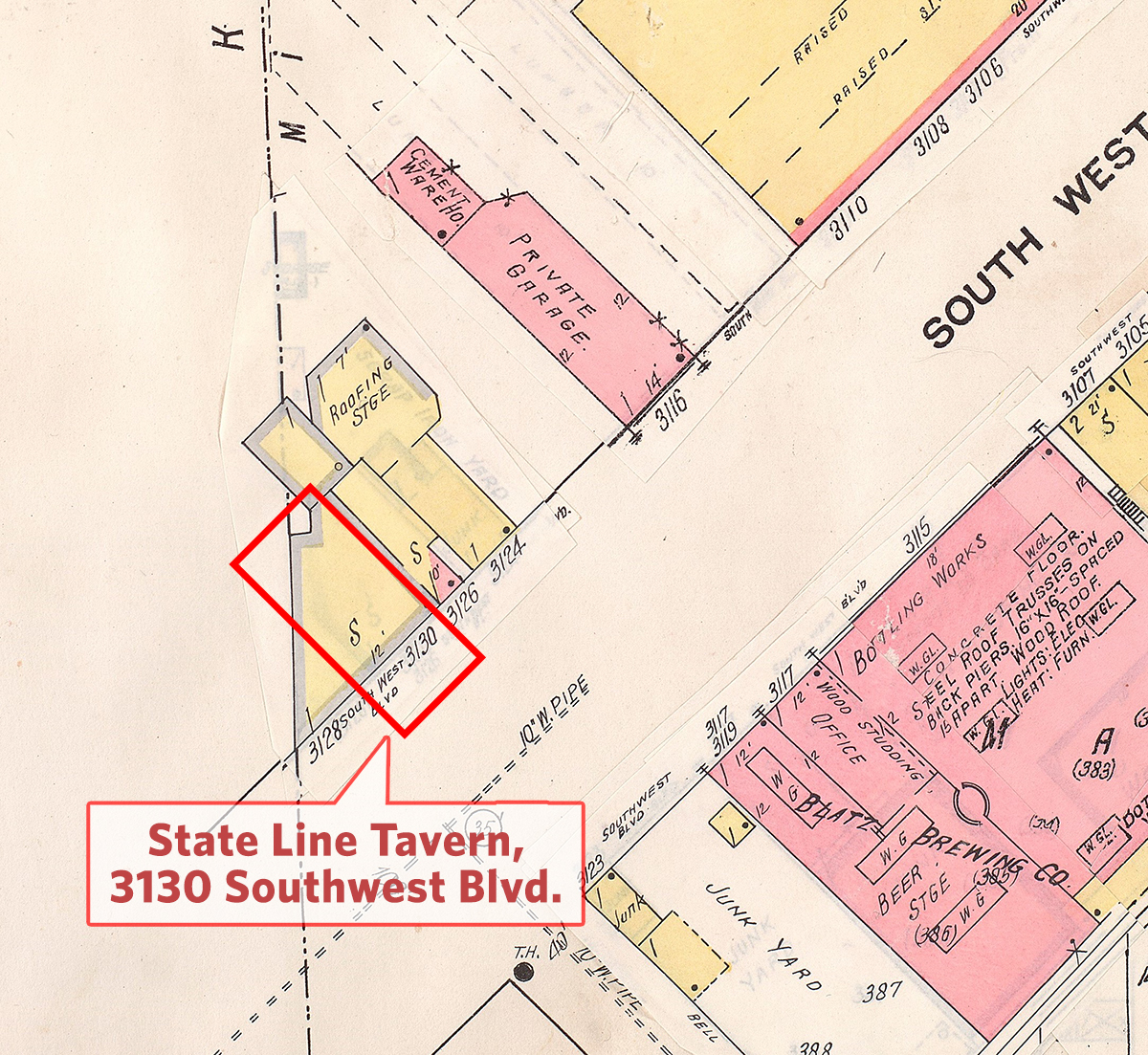 If you’re wondering why two taverns happened to straddle the border between two states, it’s relatively straightforward: to take full advantage of the geographical limits of law enforcement. Along with providing drinks, dancing, music, and entertainment, both businesses were mob-run gambling establishments. Whenever there was a police raid for a suspected liquor or gambling violation, customers simply walked to the other side other building – across the state line and out of the authorities’ jurisdiction.

On August 29, 1937, for instance, The Kansas City Star reported that Kansas City, Kansas police officers had searched the State Line Tavern, “where it had been reported Friday night that dice games were on the Kansas side of the state line, which bisects the building, and that other activities of the tavern were on the Missouri side. When the raiders reached the place last night… it was evident the dice games had been moved across the line and were in Missouri.” 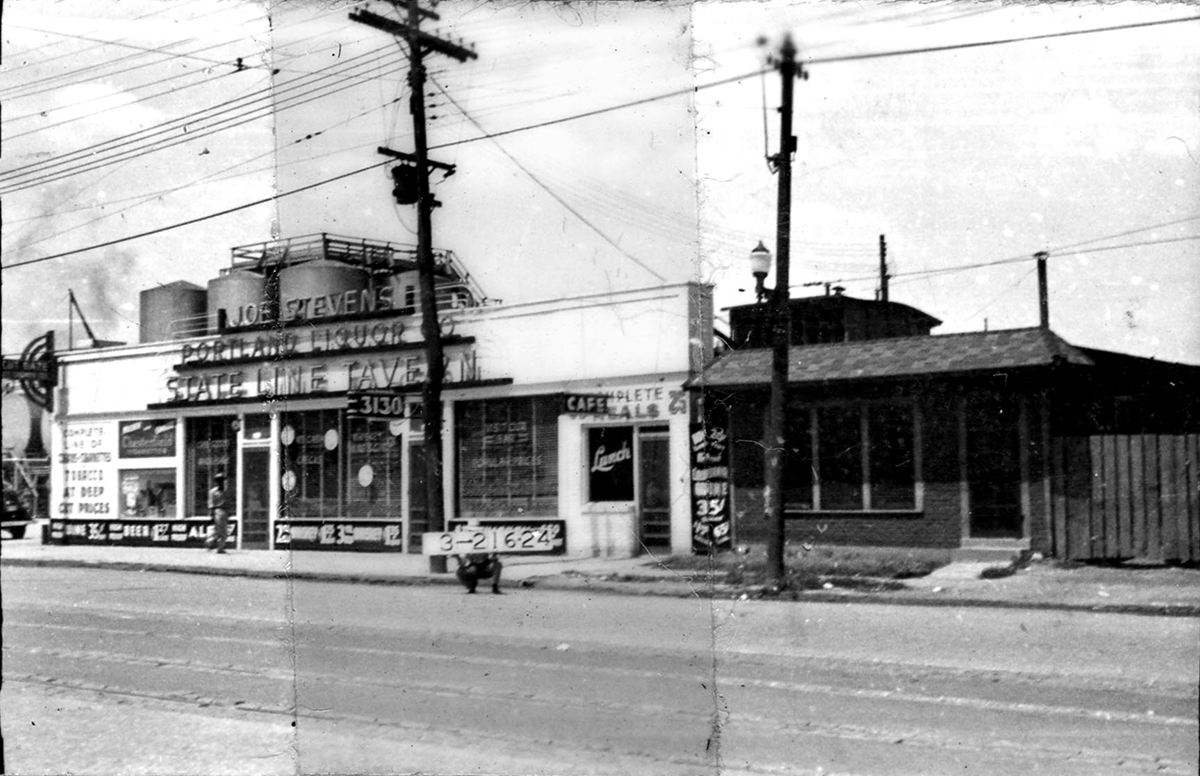 Another Star article on January 7, 1948, recounts how Kansas City, Missouri, police stormed a back room of the Last Chance Tavern and found “a score of players who had abandoned two dice tables and had strolled into an adjoining room. Their short journey put them safely into Kansas, where the police had no power to make arrests.” Officers reported that steel bars and steel sheeting lined the doors of the heavily fortified building. 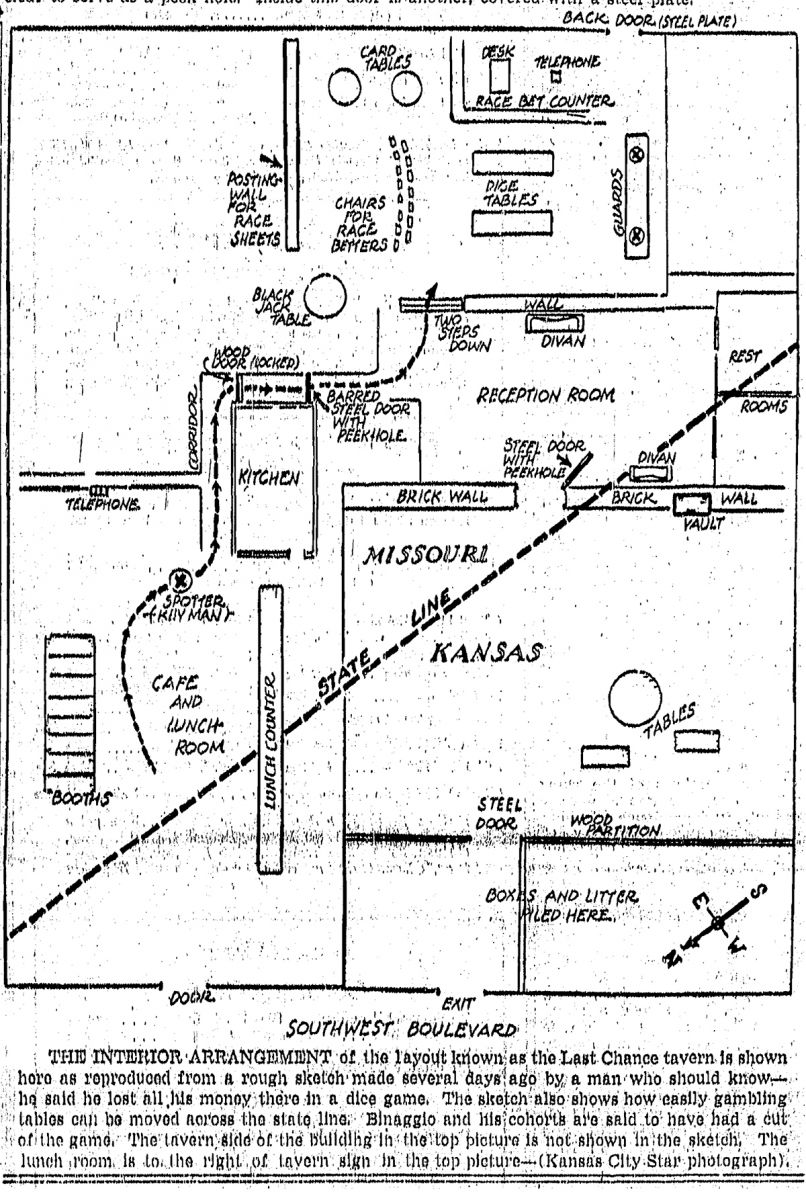 Murder and the Mob

The same 1948 newspaper article corroborates the Renegar family story. The reporter noted that the former operator of the back room of the Last Chance Tavern was Fred Renegar, who had been killed the year before. His body was discovered in his car near Penn Valley Park the morning of January 10, 1947. Additional news articles described the grisly scene and implied a mob connection. Renegar was a known gambler who reportedly owed $16,000 in losses. None of the leads in the case panned out, and his murder was never solved.

The Last Chance Tavern made the papers for its connection to another death in 1950. Charles Binaggio, then leader of the Kansas City mob, and an associate named Charles Gargotta met there the evening of April 5, 1950, before heading together to the First Ward Democratic Club. The next morning, both were found dead at the club. Reports described the deaths as gangland-style executions. 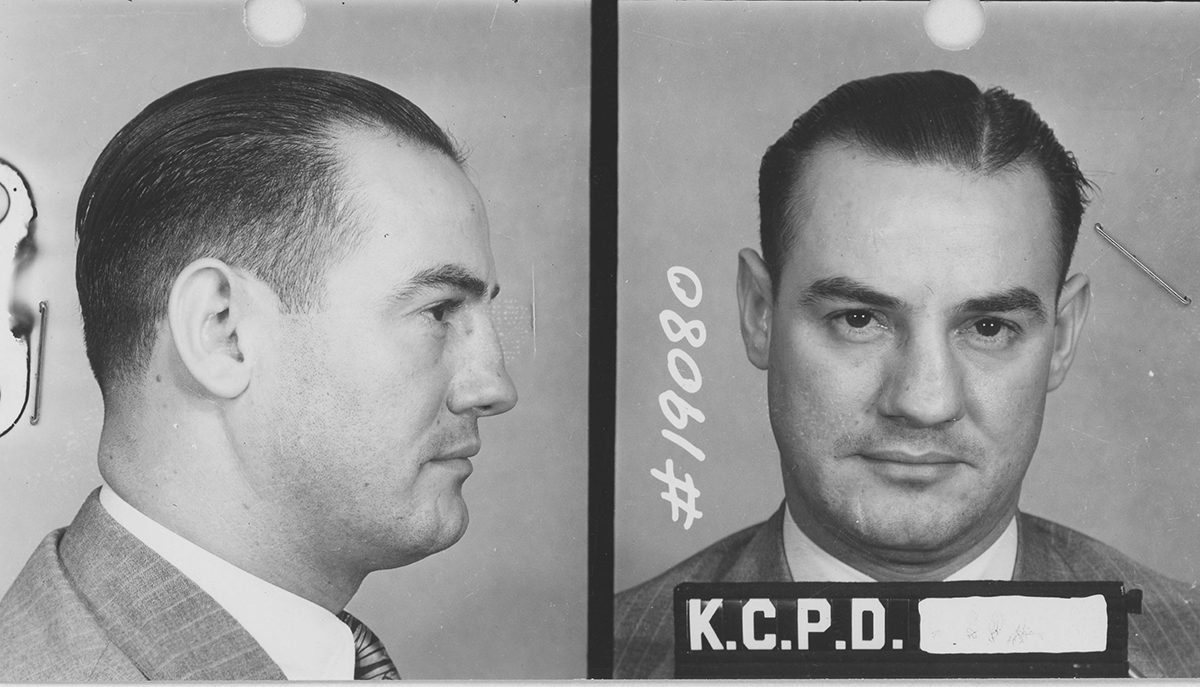 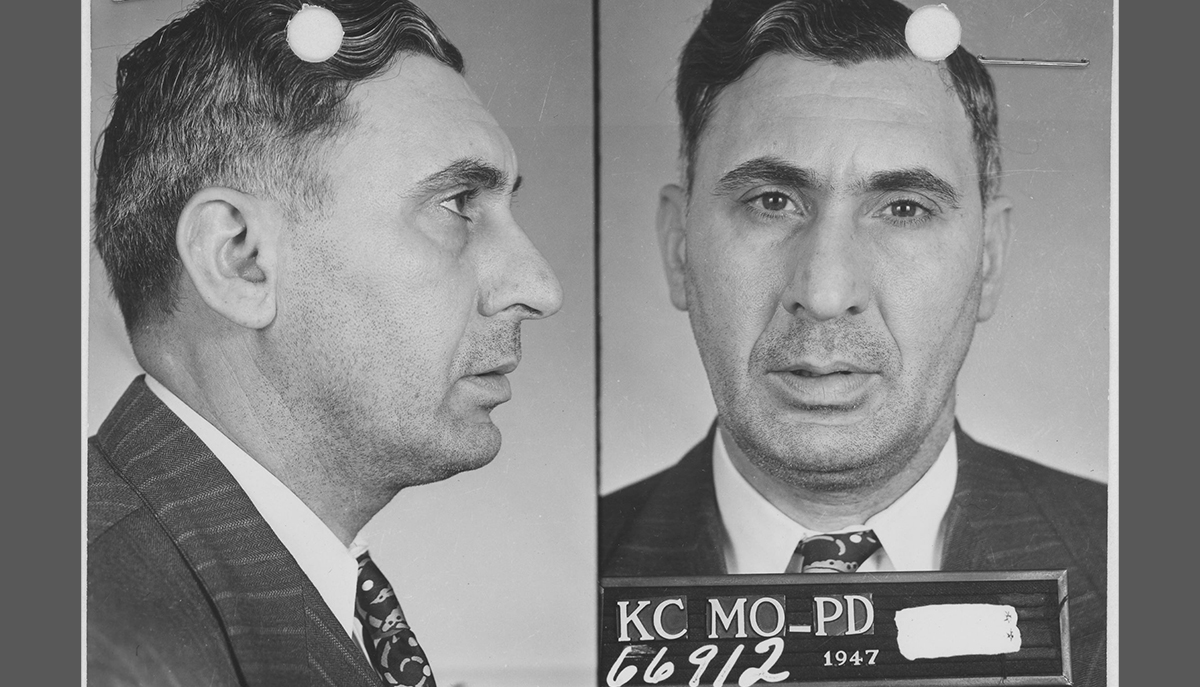 Binaggio’s murder was national news. It prompted the U.S. Senate’s Special Committee on Organized Crime in Interstate Commerce – also known as the Kefauver Committee – to visit Kansas City a few months later as part of its investigation into mob activities in 14 American cities. Evidence submitted to the committee listed both the Last Chance and State Line taverns as fronts for gambling operations. 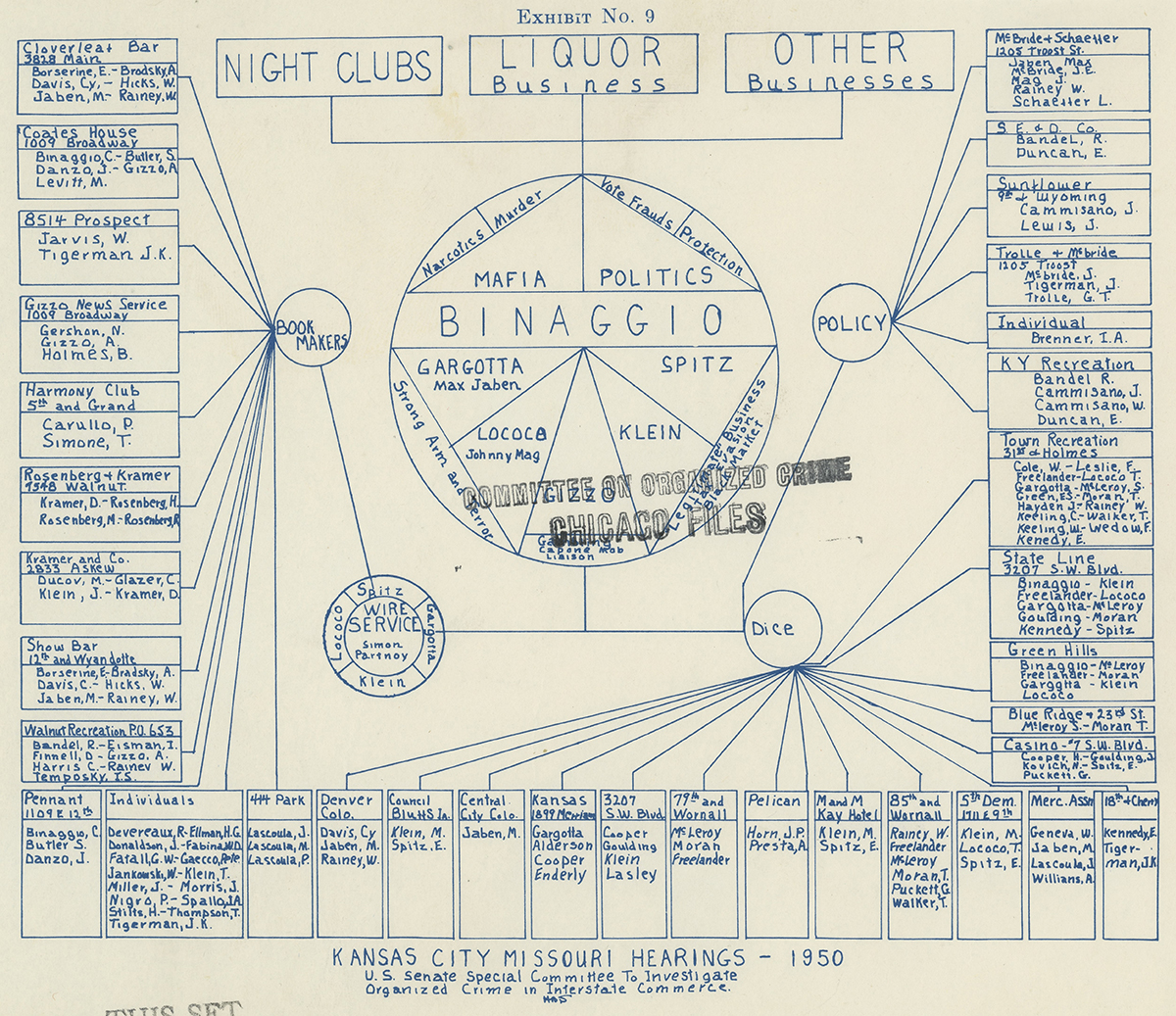 Diagram submitted to the Kefauver Committee, illustrating the activities of the Kansas City mob during Charles Binaggio’s leadership, 1950. National Archives at Washington, D.C. The Pendergast Years.

Interestingly, testifying witnesses used the names interchangeably in speaking of the same building. It could have been a ploy to confuse the committee, or maybe some of them misspoke as both establishments sat on the state line. That confusion persisted, with reporters, writers, and historians referencing the 3205 Southwest Blvd. location years later as both the Last Chance Tavern and State Line Tavern.

Neither tavern lasted long after Charles Binaggio’s death. Within weeks, officials on the Kansas side were campaigning to condemn the Last Chance Tavern and tear down the building for “street purposes.” Missouri officials were slow to agree, instead targeting the building’s owners for liquor and zoning violations. The Kansas side was razed in 1952, and the Missouri side appears to have closed a few years later.

As for the State Line Tavern, it was destroyed by fire during the 1951 Flood. Southwest Boulevard’s proximity to the Kansas River and Turkey Creek meant the entire neighborhood was inundated when the banks overflowed. Damaged oil tanks, torn off their supports by the water, created sparks when they hit each other, starting a fire that spread through several blocks along the street. 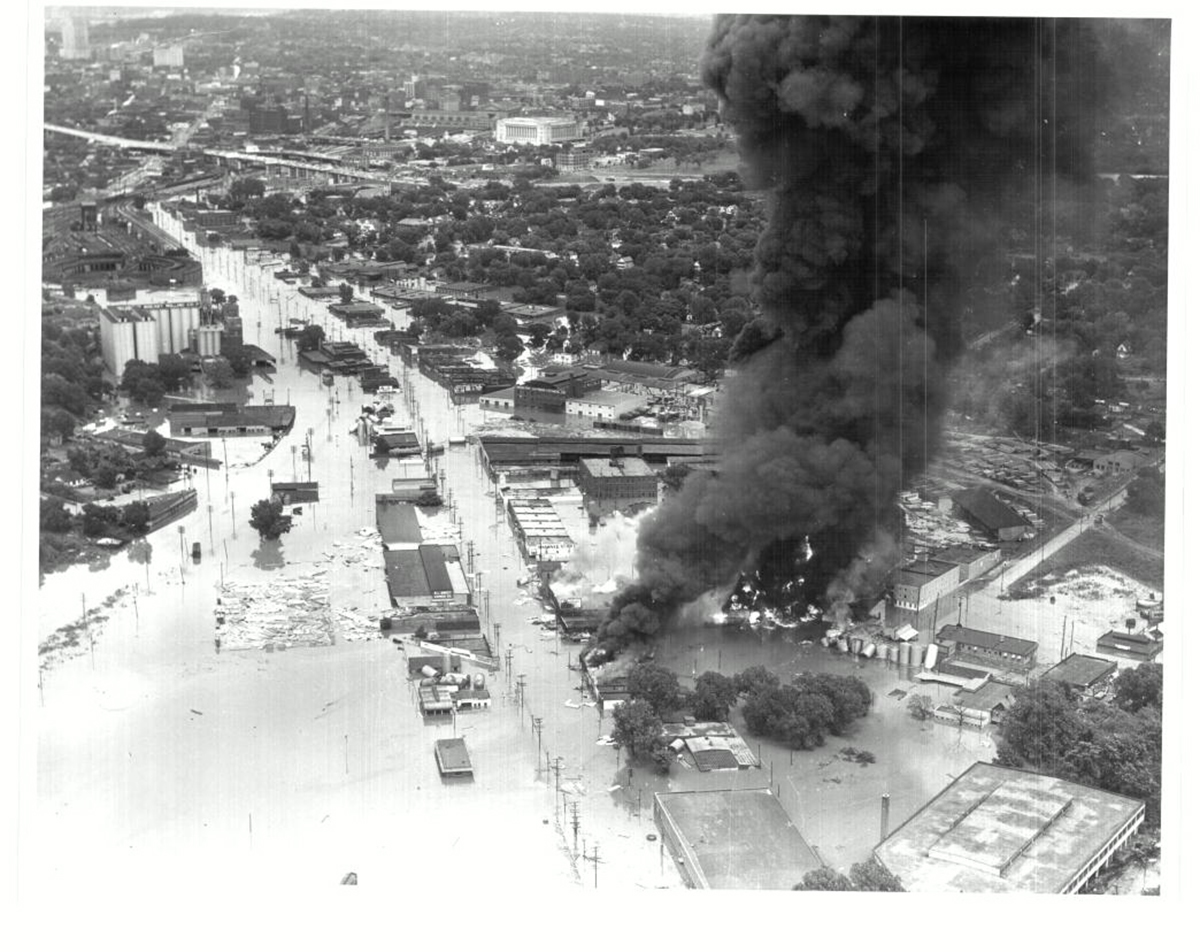 Information on the Last Chance and State Line taverns, along with images, were found by searching city directories, maps, newspapers, and databases available at the Missouri Valley Special Collections at the Kansas City Public Library. Former FBI Agent William Ouseley’s book, Open City, also contains information about the taverns, Charles Binaggio’s tenure in Kansas City, and a brief section on the Fred Renegar murder, and is available for checkout from any Kansas City Public Library location. The Binaggio and Gargotta mugshots and diagram submitted to the Kefauver Committee are courtesy of the National Archives of Washington, D.C., and may be viewed online via the Library’s Pendergast Years website.

More about What's Your KCQ?