With the first Chiefs pre-season game coming up this Saturday at Arrowhead Stadium and the Royals returning for a homestand at Kauffman Stadium next week, it’s the perfect time to tackle this question Nash Hansotia asked of "What’s Your KCQ?":

"How did the KC Royals, KC Chiefs and Kansas City coordinate the opening of the FANTASTIC, UNIQUE arenas??? Acquisition of land, ownership, etc."

"What’s Your KCQ?" is a series in which The Star and the Kansas City Public Library partner to answer reader questions about our region.
In this case, here how the series of events unfolded.

Municipal Stadium, opened in 1923 at Brooklyn Avenue and 22nd Street, was the original home for the Chiefs and baseball’s Athletics. But as part of the NFL-AFL merger set for 1970, teams were required to have 50,000-seat stadiums. Municipal held about 40,000. 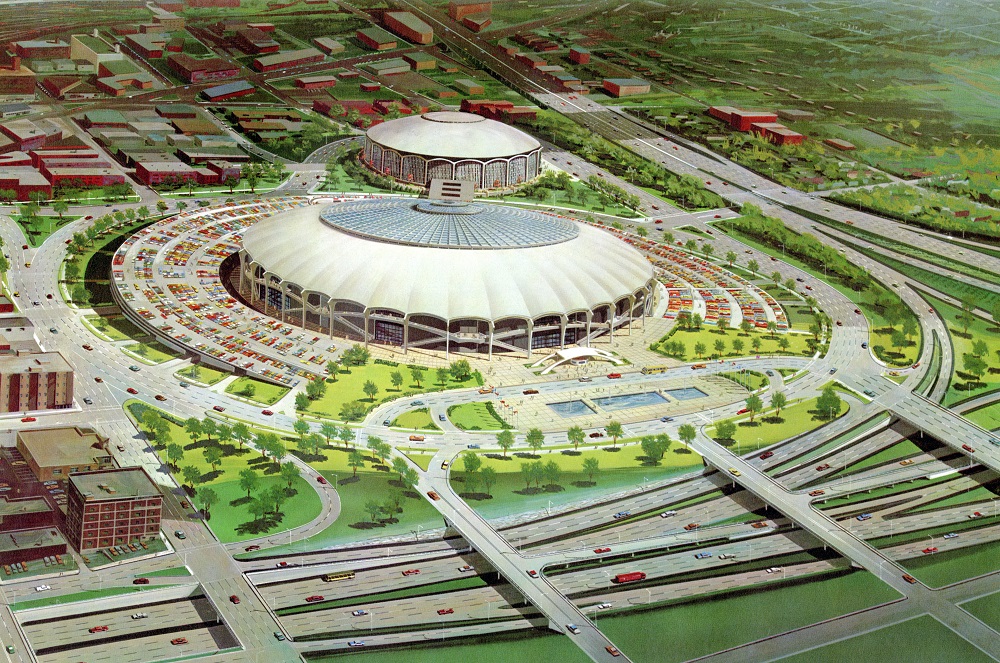 Also, with the Athletics leaving for Oakland, a new home would be needed for Kansas City to land a baseball team. Voters approved a $102 million bond issue in 1967 to build a sports complex with separate stadiums for football and basketball. A proposal put the structures downtown, near where the Kauffman Center stands today.

Denver architect Charles Deaton designed the complex, which was implemented by the Kansas City firm Kivett & Myers. When Kansas City couldn’t come up with a location in downtown or the old Municipal site, Jackson County stepped in and offered the area at the intersection of Interstates 70 and 435, an industrial area known as the Leeds site. 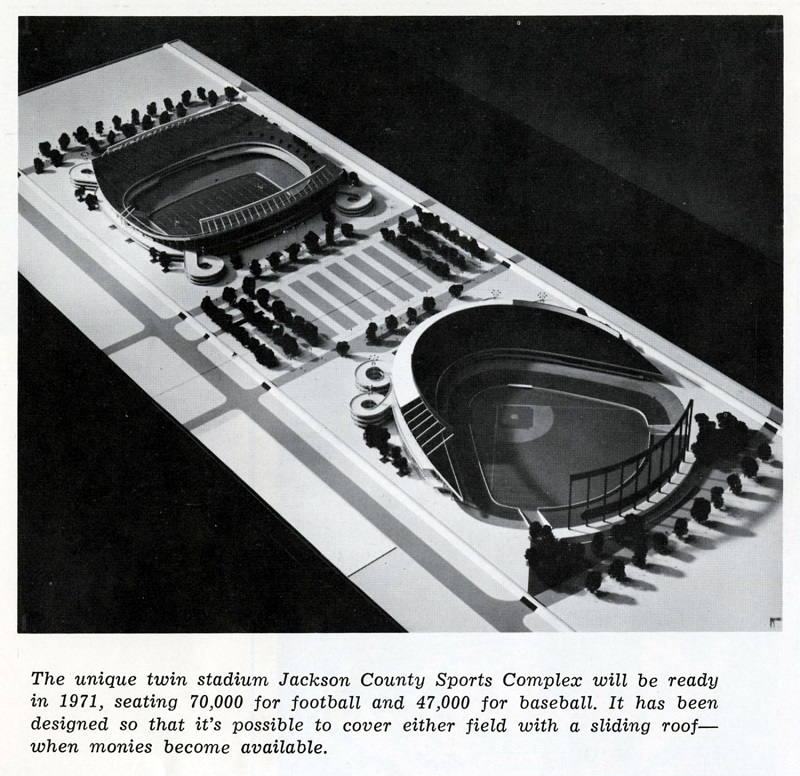 Model of the Sports Complex from 1969. Kansas City Public Library

The complex idea, which featured shared parking spaces and highway infrastructure, was the first of its kind and set the tone for future stadium construction. Throughout the 1960s and early 1970s, dual-purpose, circular stadiums were the standard. During this era, St. Louis, Atlanta, Oakland, Pittsburgh, Philadelphia and Cincinnati built stadiums that were shared by the baseball and football teams. 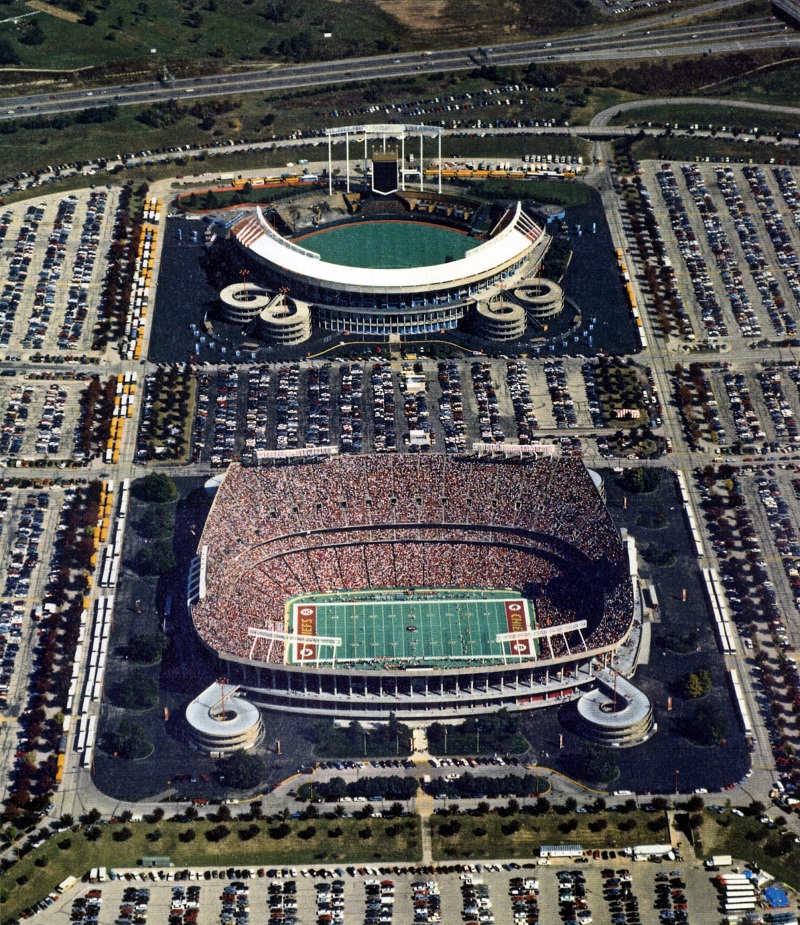 The complex idea, which featured shared parking spaces and highway infrastructure, was the first of its kind and set the tone for future stadium construction. Kansas City Public Library 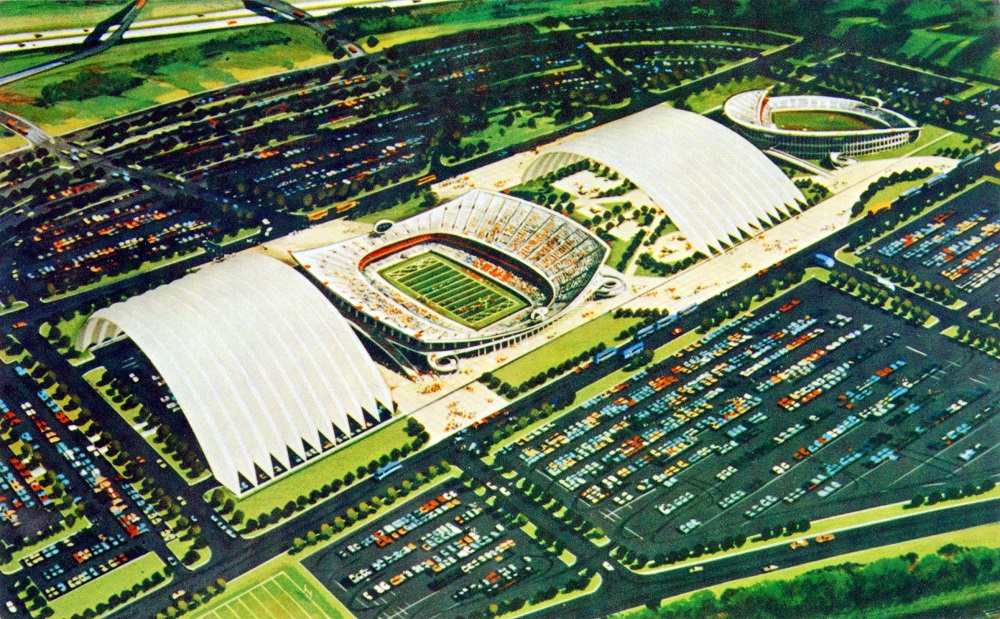 One plan for the Truman Sports Complext called for rolling roofs. This is circa 1967. Kansas City Public Library

In 2006, Jackson County voters approved a tax increase to raise an estimated $850 million to renovate the Truman Sports Complex, but rejected a measure that would have raised $170 million for a rolling roof for Arrowhead and Kauffman.

A little-known feature of the Truman Sports Complex is the tunnel that connects Kauffman and Arrowhead. Located below parking lot M, the tunnel is used for baseball players exiting Kauffman, storage and removal of trash.

Both stadiums hosted events other than Royals and Chiefs. Arrowhead has been a regular concert stop for Kenny Chesney. Taylor Swift and Ed Sheeran also played there in 2018. Billy Joel sold out Kauffman Stadium last year.