The Chiefs’ appearance in the Super Bowl — and their victory — likely did more to promote Kansas City than all the local public relations campaigns in the city’s history. Millions of people around the world viewed Kansas City in a positive light.

Some even finally figured out that whole Kansas-Missouri thing.

But efforts to push our area’s attractions and appeal will continue, just as they have for decades.

In fact, Chiefs tight end Travis Kelce hearkened back to the most successful of those promotional campaigns when he delivered his enthusiastic, alcohol-infused keynote speech at the championship rally in front of Union Station and across from the Liberty Memorial.

Heart of America. There you have it. 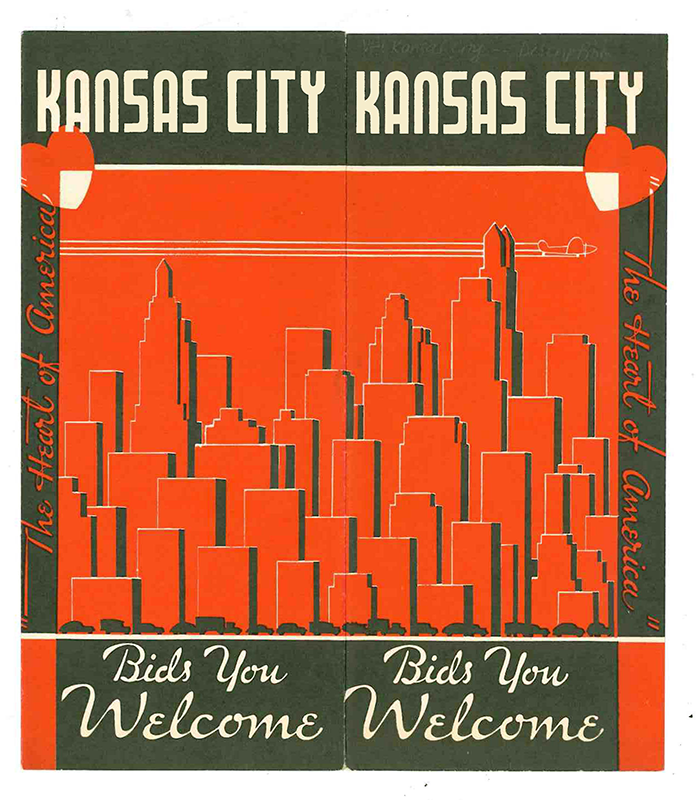 Flyer from the Convention and Visitors Bureau 1935

It has defined the area for more than 100 years, and it is at the heart (sorry) of the most recent effort to sell Kansas City.

The KC heart logo popularized by Charlie Hustle, the local vintage T-shirt maker, has become so popular that the Kansas City Area Development Council adopted it for a branding campaign in November.

That got reader Jeremy Davis’ attention. He asked “What’s your KCQ?”: “Now that the KC heart T-shirt promotes the region, I wonder what is the history of KC promo campaigns to attract tourists and tell our story?”

“What’s Your KCQ?” is an ongoing series in which The Star and the Kansas City Public Library partner to answer readers’ queries about our region.

Turns out, Charlie Hustle’s heart is simply the latest reincarnation of a very old idea.

The 1942 Kansas City Monarchs of the Negro Leagues wore a jersey with an image almost identical to Charlie Hustle’s. Many other local logos over the years have incorporated a heart.

Tim Cowden, president and CEO of the Area Development Council, told The Star in November: “In Kansas City, we’ve had a love affair with the heart for 100 years.”

We can thank Edward J. Shannahan for that.

Shannahan was a local lawyer who was handling publicity for the national convention of the Fraternal Order of the Eagles, held here in August 1914. He racked his brain for a catchy new phrase to promote not just the convention, but the city.

Once known as the “Gateway to the Southwest” (now the nickname of Pueblo, Colorado), Kansas City had moved on to an even less inspiring sobriquet.

The Star reported in 1922: “For many years Kansas City got along with no better handle to her title than ‘The City on the Kaw,’ which, considering the importance of the Kaw River and the fact that it flows by other cities, was near the zero of nicknames.”

Shannahan came up with “The Heart of America” and used it in advertising for the Eagles convention.

The Commercial Club (now the Chamber of Commerce) adopted it for a campaign to persuade Eastern tourists to pass through Kansas City on their way to the 1915 Panama-Pacific International Exposition world’s fair at San Francisco. Its design showed a train running through a heart and bearing the inscription, “Cross the Continent Through Kansas City — the Heart of America.” 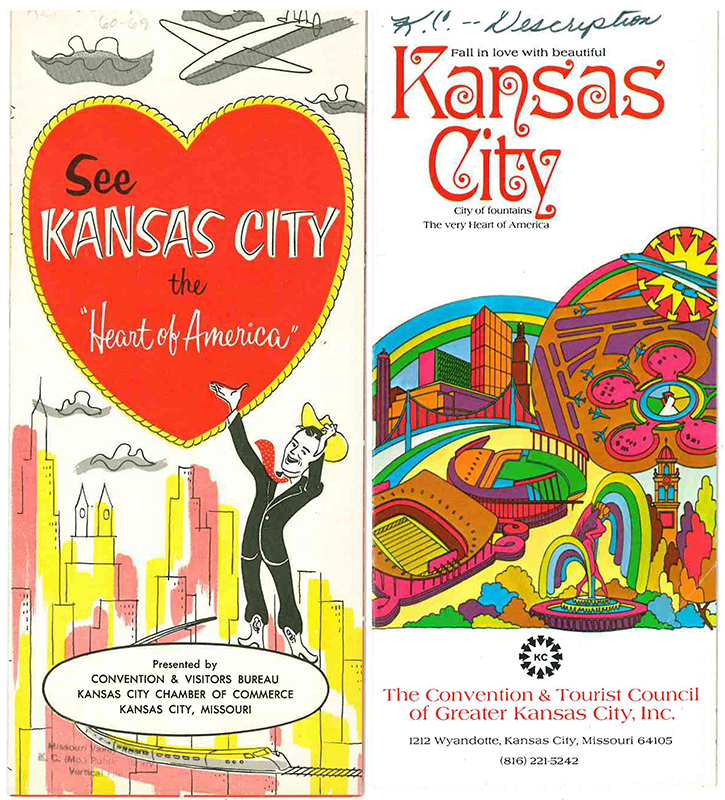 Flyer from the Convention and Visitors Bureau ca. 1960

Championed by City Councilman J.A. Boppart, “Heart of America” became the city’s official slogan on March 15, 1915, when the council unanimously passed a resolution that called on all citizens and businesses “to promote its widest publicity for the greater pride and progress of our city.”

Shannahan said the slogan was significant for more than geography.

“It is the spirit it expresses,” he said. “The word ‘America’ gives it a patriotic flavor, and the word ‘Heart’ stands for all that is noble in life — affection, sympathy, enthusiasm, hospitality, generosity and the other attributes which Kansas City possesses in such distinctive measure.” 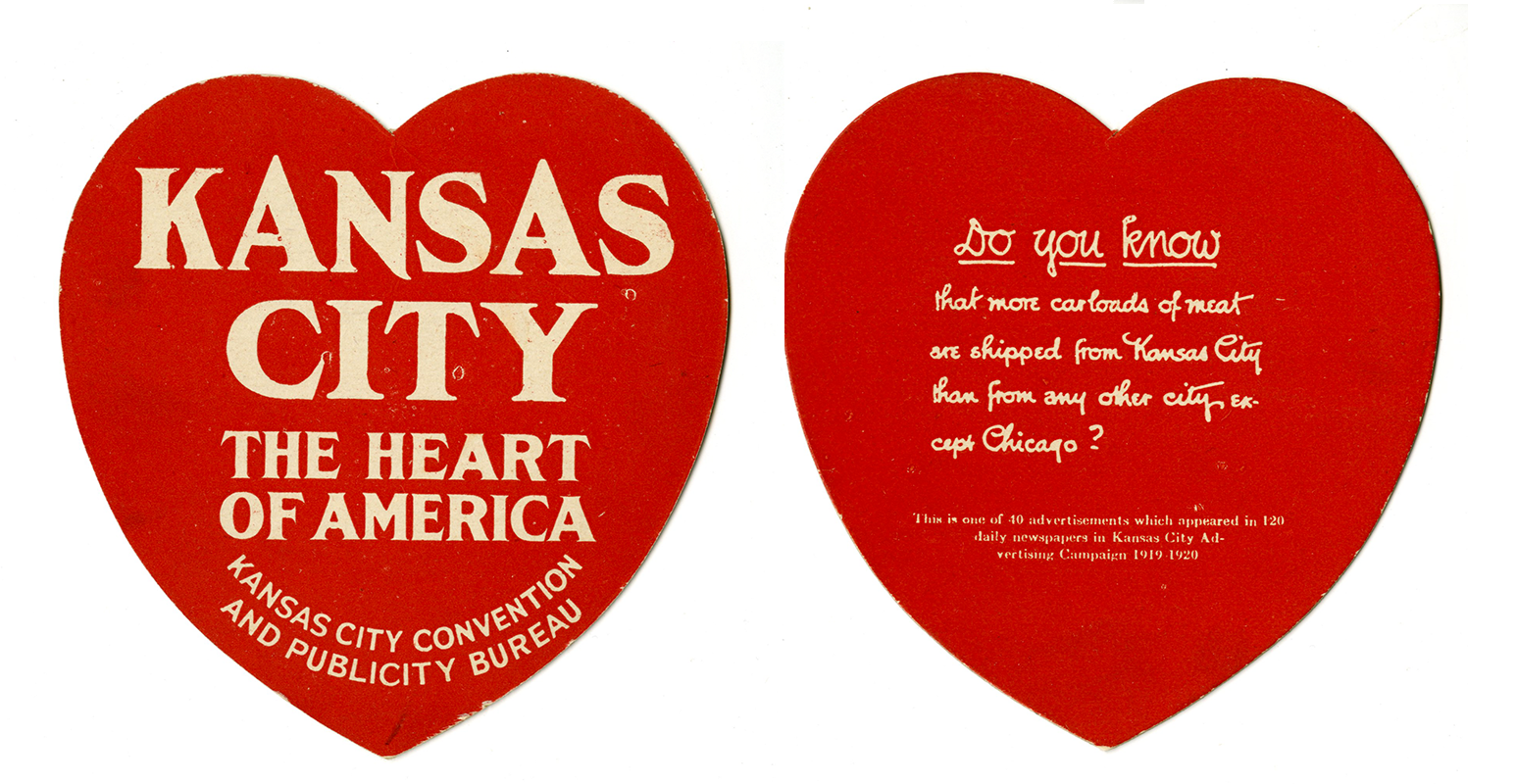 We have had other longstanding unofficial nicknames such as City of Fountains, BBQ Capital of the World and Paris of the Plains, but the slogan “Heart of America” remained Kansas City’s official identity for at least two decades.

Even as late as 1996, the tourism committee of the Convention and Visitors Bureau of Greater Kansas City turned to the old standby. It sent a bus carrying representatives of 18 tourism-related businesses to Des Moines, Iowa, and Omaha and Lincoln, Nebraska. The bus bore the logo “Kansas City: Heart of America.”

“Heart of America” continues to be used in the names of groups, businesses and even an athletic conference, but at some point the city moved on.

The powers that be have conducted a never-ending search for something fresher.

Other slogans used in just the past 25 years to promote Kansas City have included “A Flavor All Its Own” (marketed with barbecue images), “No Mountain. No Beach. No Problem,” “Smart Cities,” “ThinkKC” and “Kansas City: New Discoveries Daily.” Most of these more recent attempts at rebranding our city seem to have generated mixed reactions.

“Kansas City: New Discoveries Daily” appeared in tandem with a logo featuring a stylized blue, orange and green city skyline and was introduced in 2005 to less-than-universal praise.

“It looks like a bunch of chicken scratchings,” Kansas City Councilwoman Bonnie Sue Cooper said at the time.

And as if the multiple nicknames and slogans aren’t confusing enough, we also have the official logos — as well as unofficial logos (of which the Charlie Hustle KC heart is one).

In 2013, the image of an interlocking K and C replaced a heart-shaped fountain as the symbol on city publications. It remains the official city government logo.

But don’t confuse that with the city’s official seal. That’s a blue and fuchsia heart-shaped fountain with the inscription “City of Fountains/Heart of the Nation,” which the City Council adopted in 1992 to replace a design that resembled two interlocking paper clips.

All of this is enough to make an old-timer long for the days when everyone agreed we were simply “The Heart of America.”

“Maybe it’s old fashioned, but we are the heart of America,” Pat Paton, owner of Pat Paton Public Relations, told The Star in 2005. “We don’t need bypass surgery … we don’t have to be cute.”