Books + Music + Movies + Digital
Events + Classes + Activities
Research + Resources
Kids + Teens
All locations will be closed on Saturday, July 4th, in observance of Independence Day.
In compliance with Kansas City's recent citywide order, masks must be worn by everyone visiting our locations. Get the latest updates on the Library's COVID-19 response here.

How Long Did Trains Run on the Rail Line Now Known as the Trolley Trail? Your KC Q Answered

Question: How Long Did Trains Run on the Rail Line Now Known as the Trolley Trail?

The name of Kansas City’s Trolley Trail – a six-mile path now populated by walkers, runners, and bikers – offers some indication of its original purpose. The route is one of the last pieces of the city’s original streetcar system.

A recent What’s Your KC Q submission wondered when rail service ended along the route.

The Trolley Trail (more formally the Harry Wiggins Trolley Track Trail, named for the late state senator who helped secure its tax funding) was part of the Country Club streetcar line that ran south from downtown to 75th Street and then overlapped the Dodson Line to 85th Street. According to City Streetcars: From Hayburners to Streamliners by Edward A. Conrad, part of the route was originally intended as a railroad for passenger and freight trains as early as 1860. But the Civil War and various financial issues delayed significant construction until the 1880s.

The land was eventually acquired by the Kansas City Public Service Company, owner and operator of the city’s streetcar and bus systems.

The transit company relied heavily on streetcars in its early years but began phasing them out after World War II. As detailed in A Splendid Ride: The Streetcars of Kansas City, 1870-1957 by former Kansas City Star reporter Monroe Dodd, Public Service Company officials had deemed the streetcars obsolete and too expensive to maintain by the 1950s. Buses were cheaper to operate and, because they didn’t need miles of dedicated track and overhead powerlines to run, could easily alter routes and adapt to changing passenger needs. 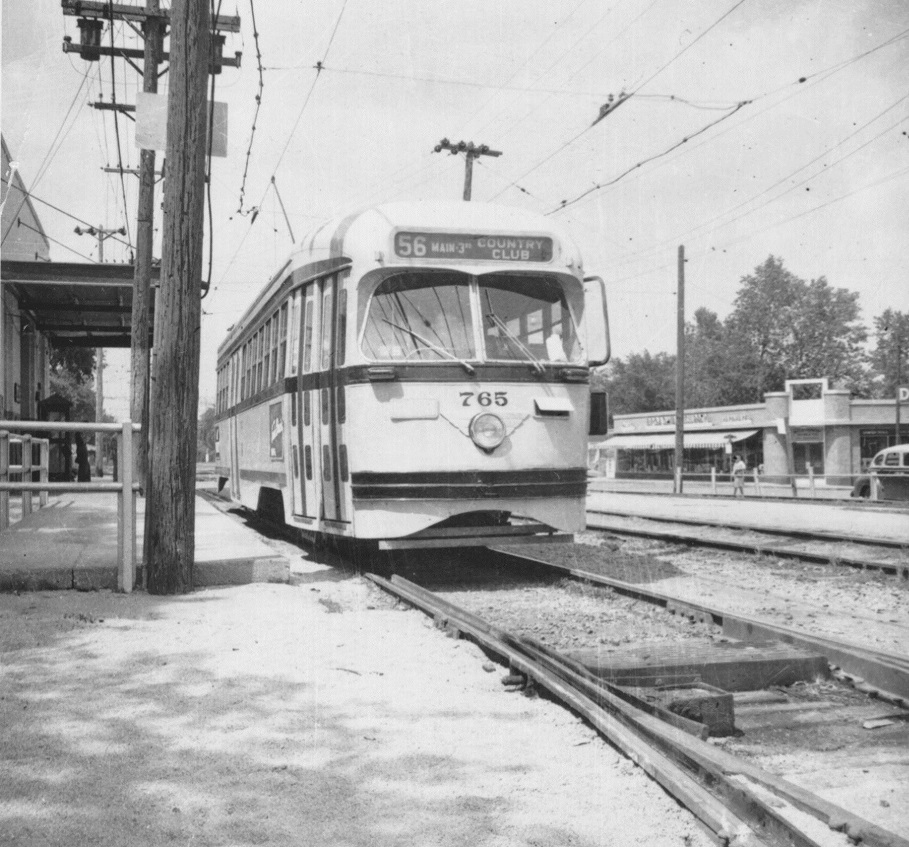 Snapshot of a streetcar on the Country Club Line near 75th Street and Wornall, 1955. From the General Photograph Collection, Kansas City Public Library. 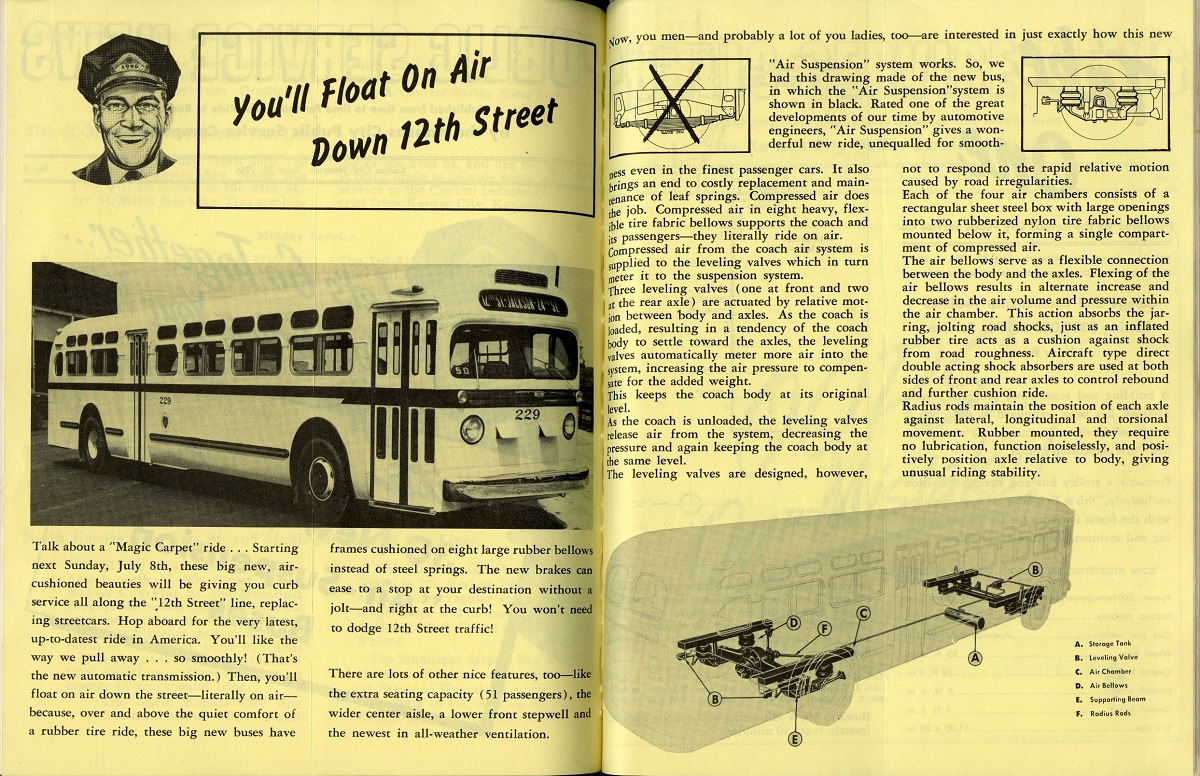 The original iteration of the city’s streetcar system finally shut down in 1957. The last three lines in operation – Country Club, Dodson, and Rockhill – ran their regular routes for the last time on Saturday, June 22. The ceremonial final run took place the following day.

Fares were waived, photos and home movies were taken, and City Manager L. P. Cookingham took a turn at the controls as the last streetcar made its way back to the barn. A short article appeared in The Star a week later, on June 27, informing the public that one of the streetcars was to be put on display in Swope Park near the zoo "so future generations can see what a street car [sic] was." 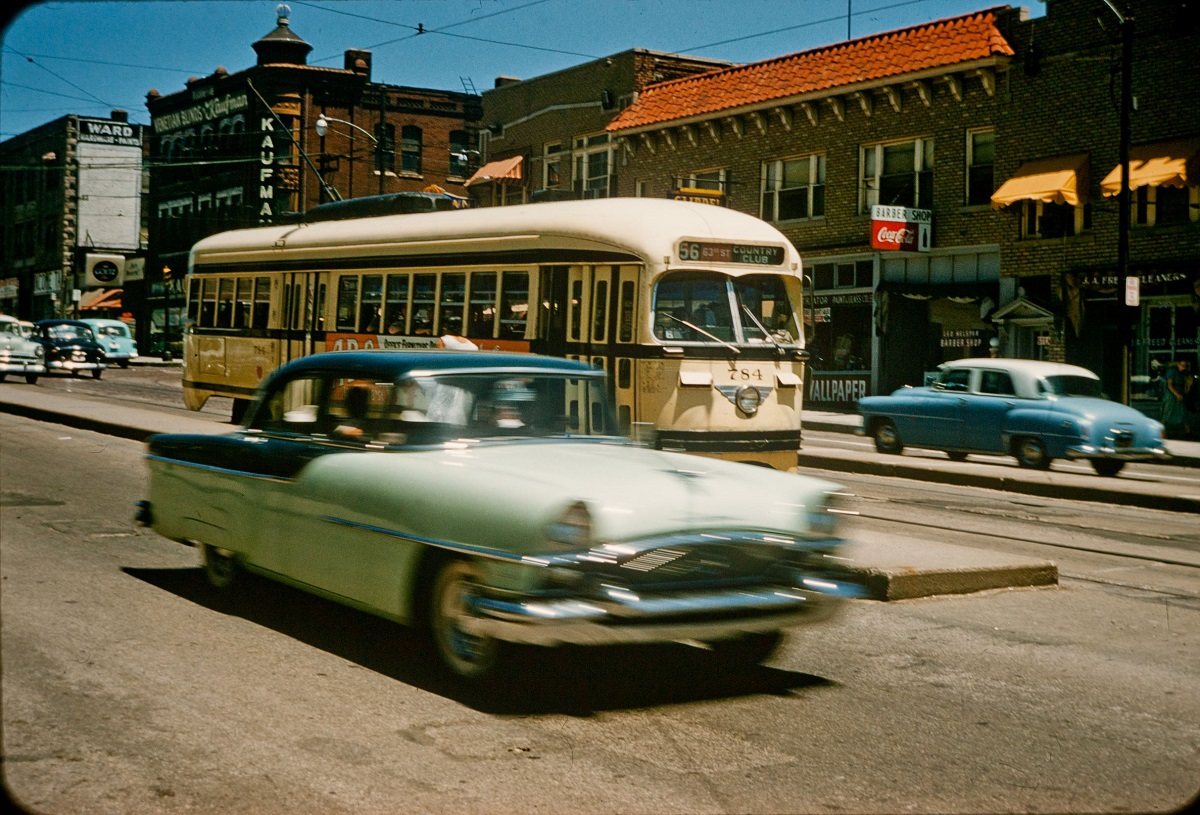 The Missouri Valley Special Collections department at the Kansas City Public Library holds a range of materials regarding the local streetcar system. To answer this particular question, we started with Edward A. Conrad’s and Monroe Dodd’s books, which provide detailed accounts of the early history of Kansas City public transportation going back to the 1870s.

Materials consulted include: transportation maps in the department’s General Map Collection (SC117), photographs from the General Photograph Collection (P1), the Dorothea Eldridge Slide Collection (P25)., subject files containing assorted articles for "street railways," and public and employee newsletters of the Public Service Company. These materials are all accessible in the Missouri Valley Room at the Central Library. The books are also available for checkout from any Kansas City Public Library branch.

“What’s your KC Q” is a joint project of the Kansas City Public Library and The Kansas City Star. The purpose is to help Kansas Citians become more knowledgeable and informed citizens. Readers submit questions and our team of librarians and reporters dig deep to uncover the answers.