Getting into "The Spirit" of Graphic Novels 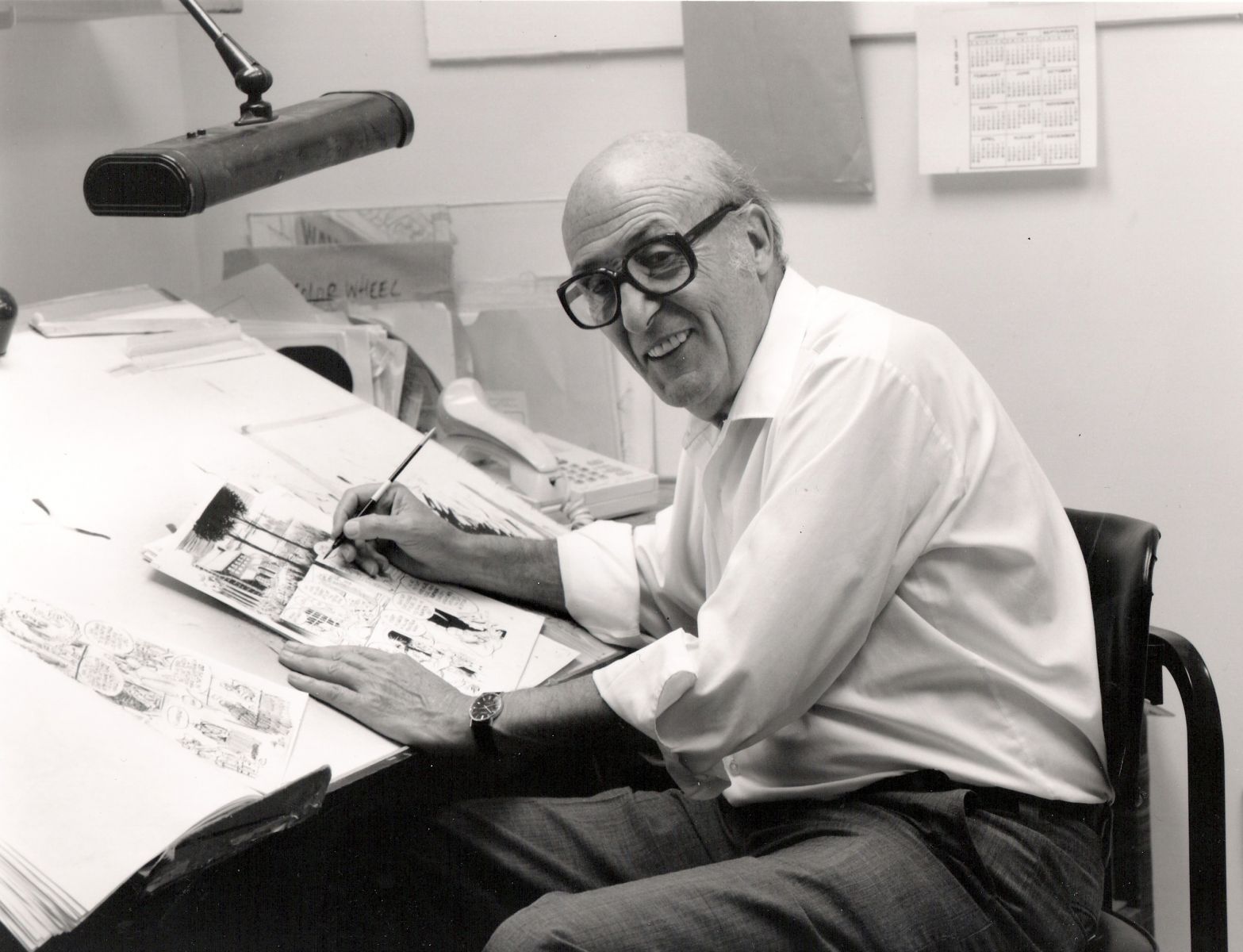 Will Eisner (1917-2005) was among a group of 20th-century artists who helped develop a different style of visual storytelling, opening up new opportunities for artists and writers and capitvating generations of readers through his illustrations and narrative skills.

Eisner's work is the focus of a Library exhibit at the Central Library's Mountain Gallery, Will Eisner: The Centennial Celebration, 1917-2017, which runs through September 2, 2018.  A pioneer in the industry during what's known as the Golden Age of comics in the 1930s and '40s, Eisner gave us the iconic crime-fighting hero The Spirit. And in the late 1970s, his A Contract with God, and Other Tenement Stories was among the works that help establish a new type of art form, the graphic novel.

The term "graphic novel" had begun to be applied to certain kinds of illustrated publications around the release of Contract in 1978; Eisner's book is considered among the earliest examples of that literary form. Based in large part on Eisner's own experiences, the collection of illustrated short shories is less a riff on the exploits of costumed heroes and nefarious villains and more a thoughtful exploration on the everyday challenges faced by real-world people inhabiting a fictionalized New York City. Contract is seen as a groundbreaking work in its handling of mature themes and storylines that went beyond the usual fare of comic strips or pulpy booklets of the time, taking a more literary, down-to-earth approach. Many of the draft panels and original artboards used in the production of Contract -- as well as issues of The Spirit and other books -- are included in the Centennial Celebration exhibit at the Library. 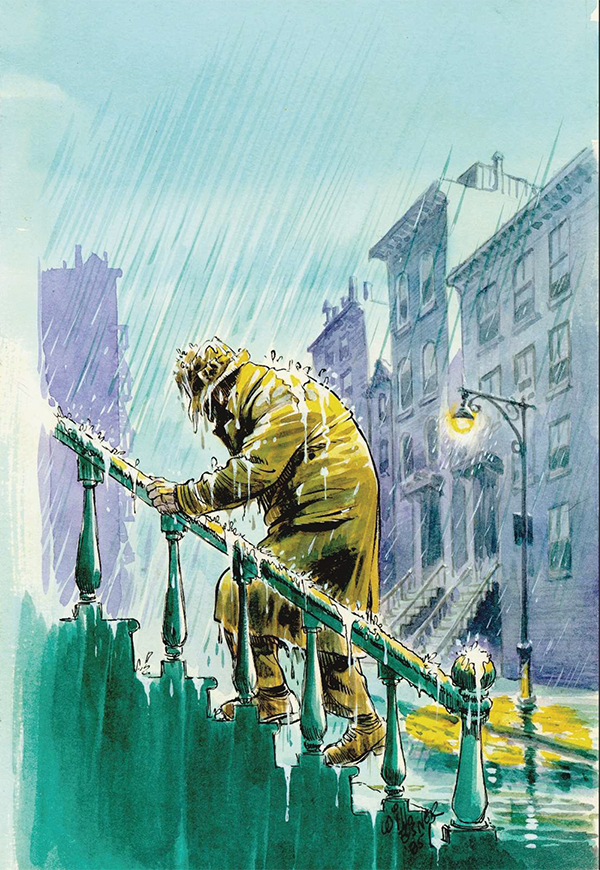 The cover art used for A Contract With God. 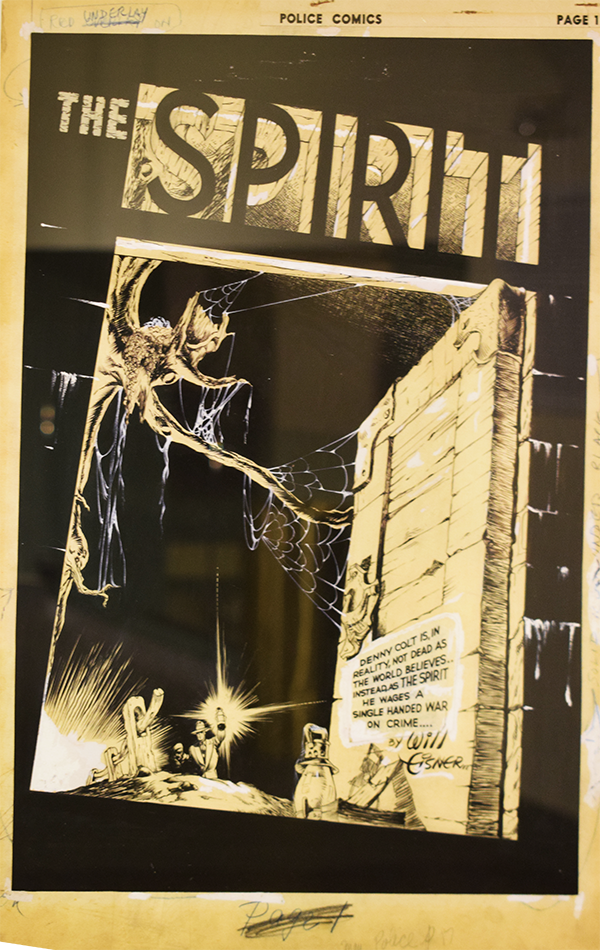 An example of Eisner's artwork for an issue of The Spirit.


On August 1, 2018, cartoonist and publisher Denis Kitchen – himself a comics legend – visited the Central Library to discuss the importance of Eisner's work and recall the personal and professional friendship he and Eisner shared. Kitchen served as the late artist’s publisher and agent for more than 30 years, and continues to represent his estate. As a cartoonist, Kitchen has been influential in the “underground comix” movement, founding Kitchen Sink Press and the First Amendment-defending Comic Book Legal Defense Fund.

Listen to the program audio

Following the presentation, Kitchen led a tour through the gallery to talk about the Eisner panels on display. Appropriately, the scene was captured by one of the attendees in illustrated format: 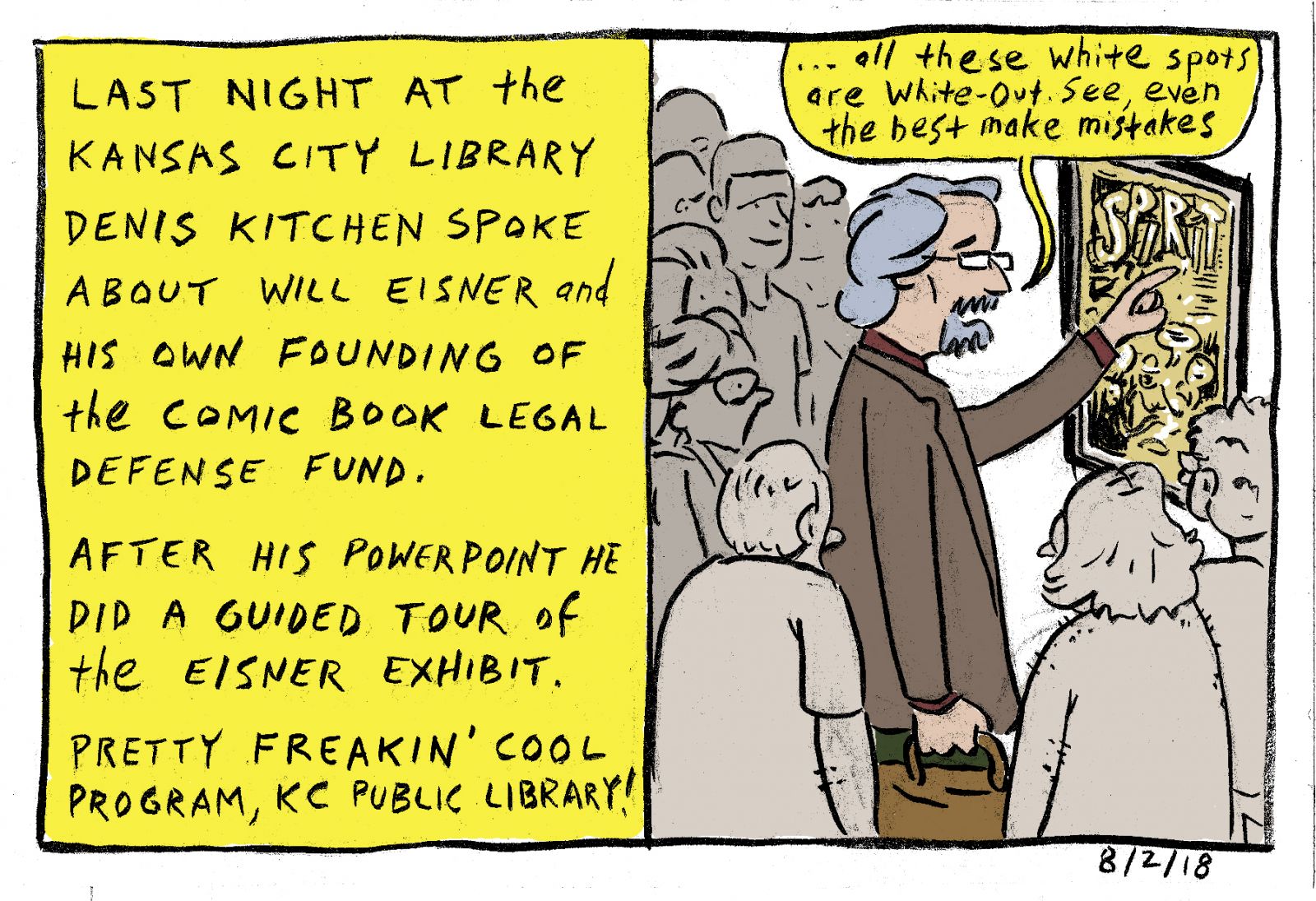 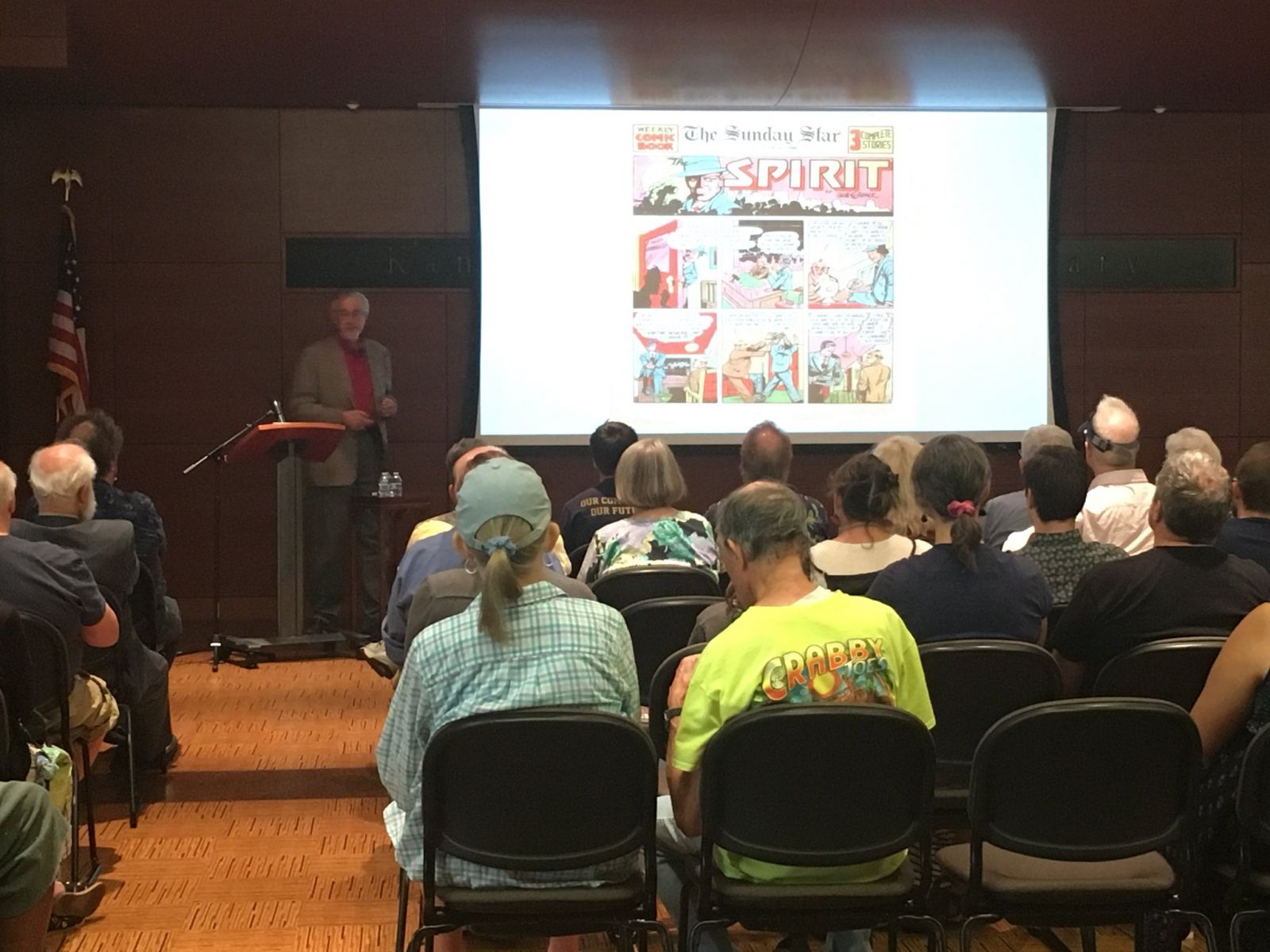 Denis Kitchen discusses the work and lasting influence of Will Eisner. 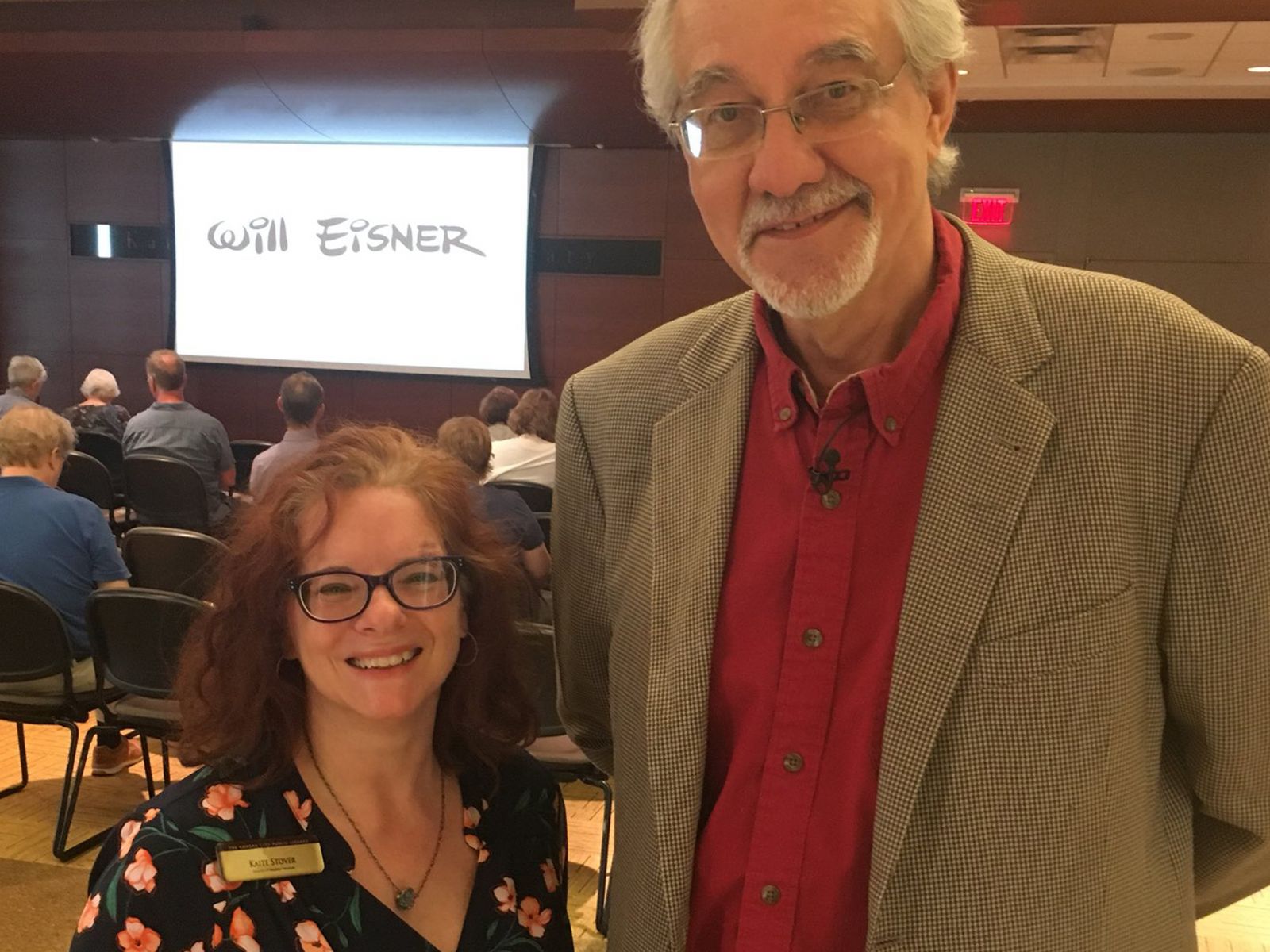 
Looking for some good titles to explore the breadth of stories, themes, and characters celebrated in graphic novels? Here's a list of some notable entries to get you started.


Digital Comics and Graphic Novels on your Digital Device


The Library also gives you a way to access hundreds of illustrated stories on your phone, tablet, or computer. The digital service hoopla's graphic novel and comic book offerings include many titles from a variety of publishers, including DC, Marvel, Dark Horse, and Image. Browse by category, explore curated collections (such as the 2018 Eisner Award nominees), or check out titles appropriate for children.