If an artist sits in a vacant gallery, is it art? If an author writes a novel with a real person as a character is it fiction?

An FYI Book Group discussion of Museum of Modern Love by Heather Rose held at the Kemper Museum of Contemporary Art had book and art lovers pondering these very questions. Readers also had the chance to pose their questions to the author, who dropped in via Facetime from her home in Hobart, Tasmania.

Rose’s American debut (she has published numerous other books in her native Australia) is an imaginative blend of real and fictional characters--performance artist Marina Abramovic and imagined attendees of her performance piece “The Artist is Present.”

The novel opens on the eve of this landmark 2010 exhibition at New York City’s Museum of Modern Art. Running three months, it was the cornerstone of a major retrospective of Abramovic’s work. For 75 days, the Serbian artist sat in a chair on one side of a table and faced an audience member sitting opposite her.

The artist and viewer would gaze into each other’s eyes for as long as the guest wished. Abramovic never broke the stare and never spoke a word.

Rose was one of the fortunate exhibit attendees who sat with Abramovic. She felt drawn to the artist and knew she had to use Abramovic as a “real” character in the novel.

Readers immediately homed in on how the book connected them to the art and how its characters connected with one another other through Abromovic’s art. They were fascinated with the concept of performance art and many had no idea what it was and how it differed from a live musical or theatrical performance.

Evelyn Summers of Raytown asked, “What is art to us? How do we make the determination on what is art to us and what isn’t? I’m reminded of the local controversy over the Shuttlecocks and the ‘hair curlers’ on Bartle Hall, Sky Station.” Attendees recalled their own first impressions when the Shuttlecocks were installed on the Nelson-Atkins Museum of Art grounds in 1994. 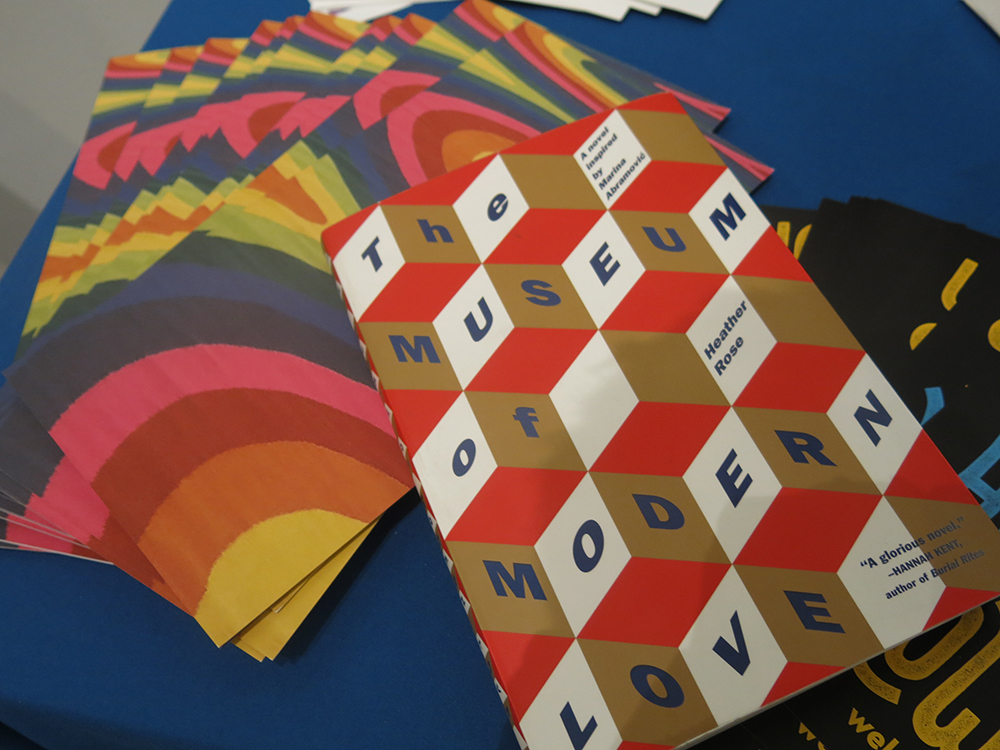 The FYI Book Group selection The Museum of Modern Love. 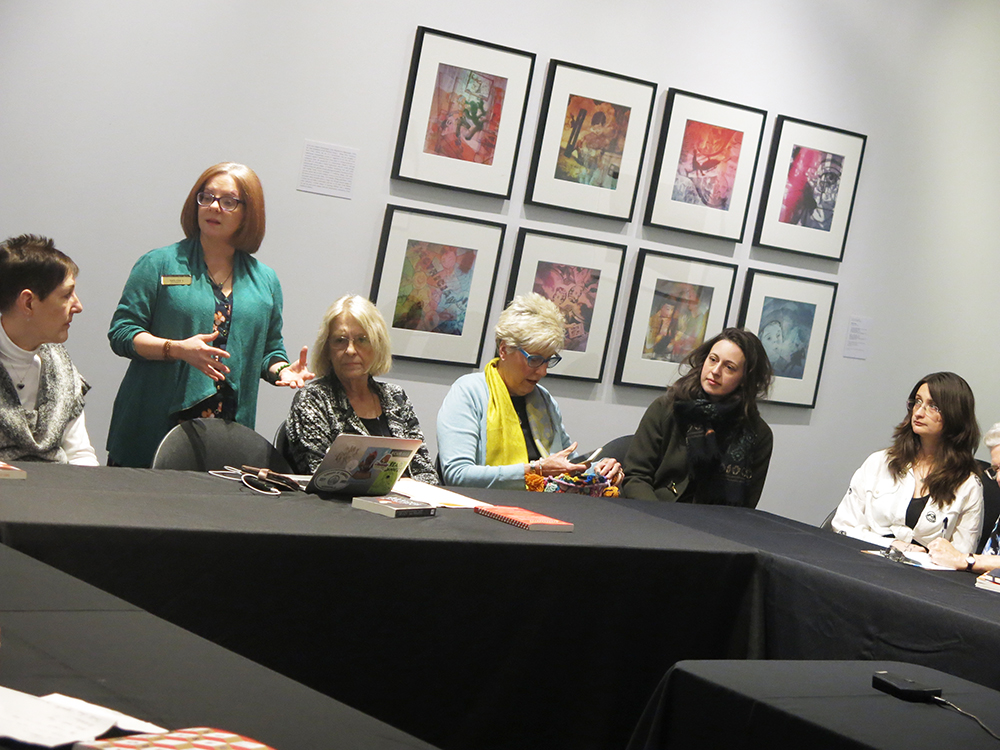 
Laura Pensar, an artist with performance art experience, explained what makes performance art different from other artistic expressions. “The art you see on the walls was created to be a discreet object, to have a life of its own on the wall. ‘The Artist is Present’ isn’t just Marina in a chair,” she said. “It’s the whole exhibit. It involves all the people in the room.”

“Performance art exists in the time that it happens, in the environment and with the people who are there to witness it. All of those things together make the piece itself.”

Rose talked about the ‘character’ of Marina Abramovich and the amount of research she did in order to keep Marina’s actions, decisions, and statements true to real life. A great deal of the material was drawn from the collection in the Museum of Old and New Art, which holds the largest collection of books on Abramovich’s life and work. 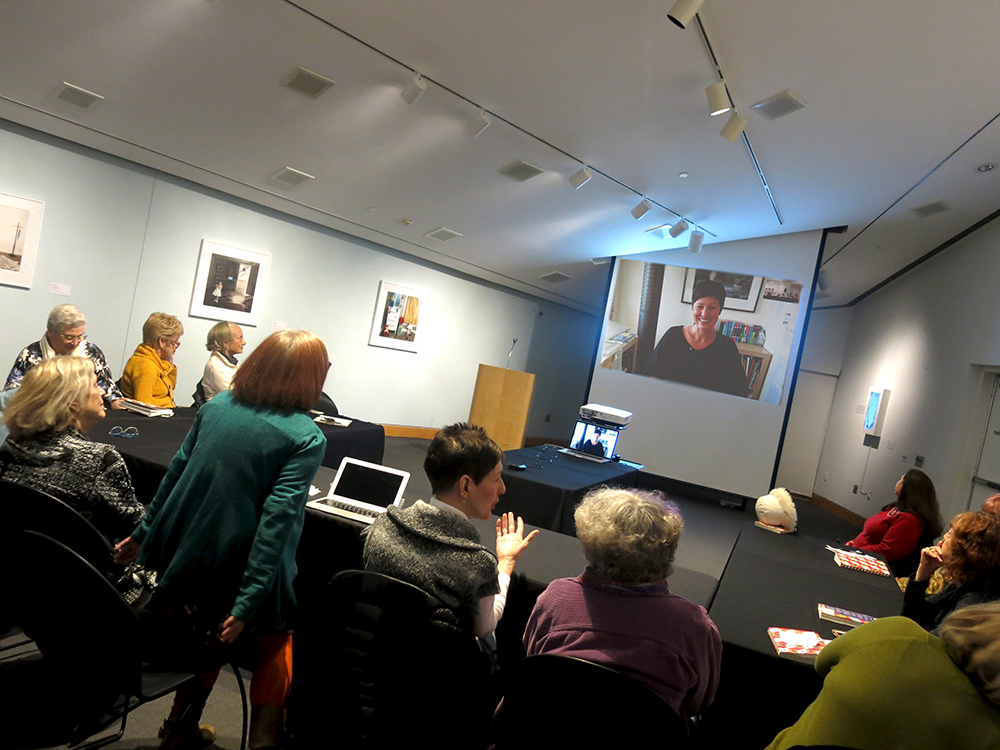 The group spoke with author Heather Rose via webcam. 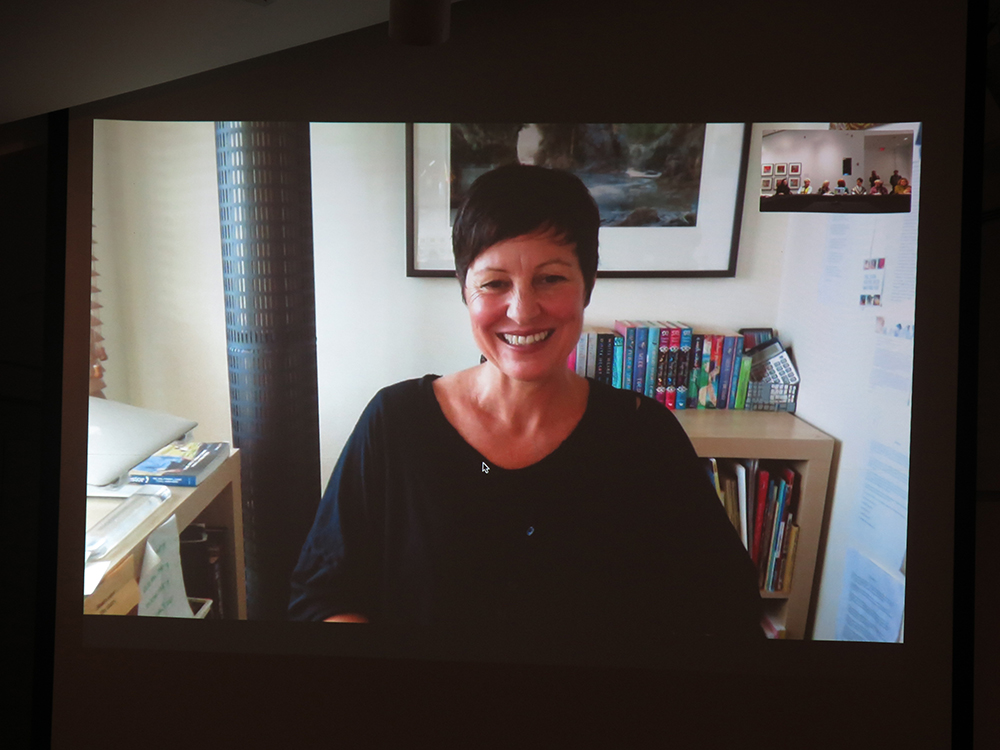 Heather Rose discussed her research into the art world.


Participants were amused to realize the character they talked most about was the “real person” and the majority of their conversation revolved around art and how the viewer is a participant in the creative process.

So is there an answer to the opening questions? Like art, like reading, it’s all in the eyes of the beholder.


More about the FYI Book Group