[NOTE: This piece has been updated since its initial publication in summer 2018.]

You might not expect LGBT history – or at least, positive history – to be written in Kansas, home of the Westboro Baptist Church and a statehouse that pushed back against gay marriage for more than a year after it was sanctioned by the U.S. Supreme Court in 2015.

But the past decade and a half has seen enlightenment and acceptance that belies perceptions of one of the country’s most famously red states. Progress has come fitfully, to be sure. But it has come nonetheless, and C.J. Janovy details the advances in both attitude and deed in the Library’s latest FYI Book Club selection, No Place Like Home: Lessons in Activism from LGBT Kansas.

Listen to audio from C.J. Janovy's presentation at the Plaza Branch on August 8, 2018.

In Wichita, quiet computer consultant Tom Witt channeled his anger over the state’s gay marriage ban of 2005 (ultimately overturned by the Supreme Court’s landmark Obergefell v. Hodges decision) into a late lifetime of activism. He became the first chair of the coalition of gay rights organizations now called Equality Kansas.

Stephanie Mott, born Steven and raised on a farm outside Lawrence, rolled through 30 Kansas cities in four days in 2011 to talk to folks on the street – and in Wal-Mart parking lots, restaurants, gas stations and donut shops – about the transgender experience. She remains a kind of Westboro antidote, a strong LGBT presence in the state who writes and speaks at colleges, hospitals, prisons, and jails about gender identity, about the merits of understanding and inclusion.
RELATED
Noted Kansas Transgender Activist Stephanie Mott Dies At 61
KCUR-FM,  March 6, 2019

STORY
Sandra Meade, a Navy veteran who went on to work for a number of Department of Defense programs including the space shuttle and B-2 bomber, pushed as a transgender woman for Roeland Park’s passage of a nondiscrimination ordinance in 2014 – at the time, making it the only city in the state besides Lawrence to spell out LGBT protections.

“So much progress demonstrably happened on the coasts and in big cities. Clearly, those stories had to be told – and have been told over and over again,” Janovy says. “But knowing what the struggle had been like here in the middle of the country, not seeing it reflected in the larger conversation did begin to feel like an oversight.”

Plus, as she contemplated her book, “I knew there was a great story.”

The 55-year-old Janovy lends journalistic rigor to No Place Like Home. A Kansas Citian since 1990, she spent a decade as editor of The Pitch and now is the digital content editor for public radio affiliate KCUR. She spent three years chronicling the stories of activists across Kansas and the evolution of public attitudes and LGBT rights in the state.

Her first book also reflects a personal passion. Janovy, who is gay, participated in rights marches on Washington in 1987 and 1993. She married in July 2015, two weeks after all state bans on same-sex marriage were rendered unconstitutional by the Supreme Court’s ruling in Obergefell.

She’s not declaring Kansas an LGBT haven. Among other things, it just passed legislation allowing private, faith-based adoption agencies to veto placements of children into homes with LGBT parents based on “sincerely held” religious beliefs.

But the state, she says, has more heart than its politics and national identity imply. In No Place Like Home, she lays out example after example of “quiet and sometimes surprising progress” on LGBT acceptance and rights.

The book is resonating on both sides of the Kansas-Missouri border. Janovy is in early discussions, she says, with a Kansas filmmaker interested in making it the basis of a documentary.
RELATED
Lights, camera, Kansas, action: ‘No Place Like Home’ the movie
cjjanovy.wordpress.com, February 5, 2019

Kaite Stover, the Library’s director of readers’ services, seized upon No Place Like Home for the FYI Book Club, and will lead a discussion Sunday, July 29, 2018, at 2 p.m. at the Kansas City Center for Inclusion, 3911 Main Street. Several days later, Janovy will discuss the book and the LGBT rights movement in Kansas during a public program at the Central Library, 14 W. 10th St., on Wednesday, August. 8, at 6:30 p.m.


C.J. Janovy talks more about No Place Like Home:


Q: Beyond the documentary possibility, are you getting much feedback from the LGBT community?

Sandra Stenzel, who’s in the second chapter and is the person who maybe suffered the most professional and mental harm (losing her job as economic development director in Trego County after speaking out against Kansas’ anti-gay marriage amendment), had maybe the most powerful response. She said the book gave her life back to her. Which is not literally true; she’s done a lot of things in between getting fired and today. But I think being able to see a sense of meaning around what she went through was extremely healing to her.

Q: The book serves as a sort of how-to guide for local activism. Was that part of your intent?

A: Exactly. The subtitle is Lessons in Activism, and I think people will find different lessons to relate to in these different stories. If I had to narrow it down to three main themes that kept coming up for me, No. 1 would be: Prepare to lose. In the months-long efforts for a nondiscrimination ordinance, for example, they might lose at City Hall but, in the effort, they’ve made all these new allies. They’ve educated the community. They’ve opened the eyes of a lot of people who weren’t even thinking about this issue before. That’s a victory in and of itself.

No. 2 is to be gentle with your allies. You see a little bit of infighting in the book among people who all have the same goal but can’t get past egos or differences in tactics. That hurts everybody, especially in this day of social media where it’s very easy to attack each other.

No. 3 is just to do something. There are people in the book who were uncomfortable leading rallies on the statehouse steps and being on TV, and then there are people who were happy to bake lemon bars. All of it matters.

Q: Do you consider yourself an activist? The book itself could be considered a form of activism.

A: That’s an interesting question. I’m first and foremost a journalist, and there’s a lot of debate about whether journalism is activism. When I was going to those marches in Washington, one of them was part of my job at the time. I was working for a gay rights group. The other part of it is that this (being a journalist) is my life. It helped me see good stories that needed to be told, maybe, that other folks didn’t see.

I think about what (writer) James Baldwin talks about in terms of being a witness, about the importance of having people witness the movement. I see myself more in that role.

Q: In the book, you illustrate acts and attitudes of common decency and acceptance – or at least tolerance – by ordinary people across Kansas. Do the state’s politics reflect its people?

A: I think that’s a question that Kansans have been wrestling with for the last few years. There are a lot of people in my book who say ‘no.’ The last couple of elections have been interesting, and we’ll see in the next cycle whether the representation changes as a result of Kansans realizing the stakes of not paying attention to what’s going on in Topeka.

Q: Where would you rank the state in LGBT livability at this point?

A: I think in general that LGBT people are more accepted in Kansas than the stereotype. That doesn’t mean they’ve arrived at the other end of the rainbow. There’s still a lot of struggle, and there still are lots of ways that living in Kansas could be better for LGBT people.

Q: Many of the subjects of No Place Like Home are older, retiring or moving on. Is there a new generation of activists ready and willing to step in?

A: Tom Witt is still with Equality Kansas. Sandra Meade moved to California. It’s some of the same people and, in other cases, new people have stepped in. They may not be the exact same roles.

For example, there’s an LGBT lobby day at every legislative session. Equality Kansas sets it up and, this year and last year, the biggest presence was high school and college kids from Wichita … a strikingly young crowd like I’ve never seen before. I’m happy with where they are right now, regardless of where they might be in a couple of years or in five years.

Q: Is there a similar book waiting to be written on Missouri’s LGBT history? Would it show same kind of progress?

A: My guess is that it would. I focused on Kansas because of Westboro and the state’s reputation. But I’m guessing a similar book could be written about any middle-of-the-country red state minus Westboro.

Q: Are you tempted?

A version of this story, written by the Library’s Steve Wieberg, recently appeared in The Kansas City Star.

Copies of the book will be provided for participants in advance of the discussion date. RSVPs required.

The author will attend the discussion.

About the book >
About the author > 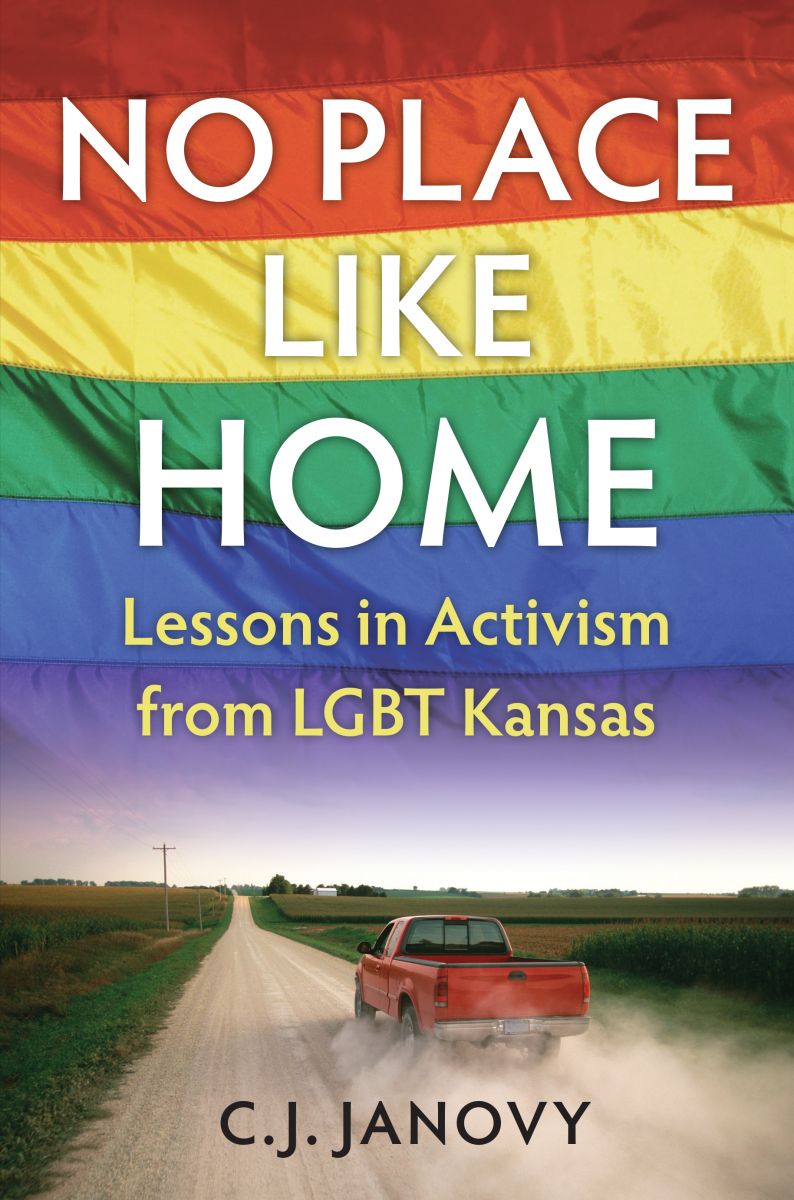