Feed the Meter: National Poetry Month at the Library

Passionate about pentameter? Really into rhyme and rhythm? Are you a stanza stan? The Library can help you get well-versed during National Poetry Month with a collection of reading recommendations, special online events, book discussions, and more!


Explore these stellar new books of poetry. We couldn't resist throwing in a few classics as well.

Enjoy digital editions of poetry books and collections available in hoopla. Download or stream titles in eBook or digital audiobook formats immediately with your library card. 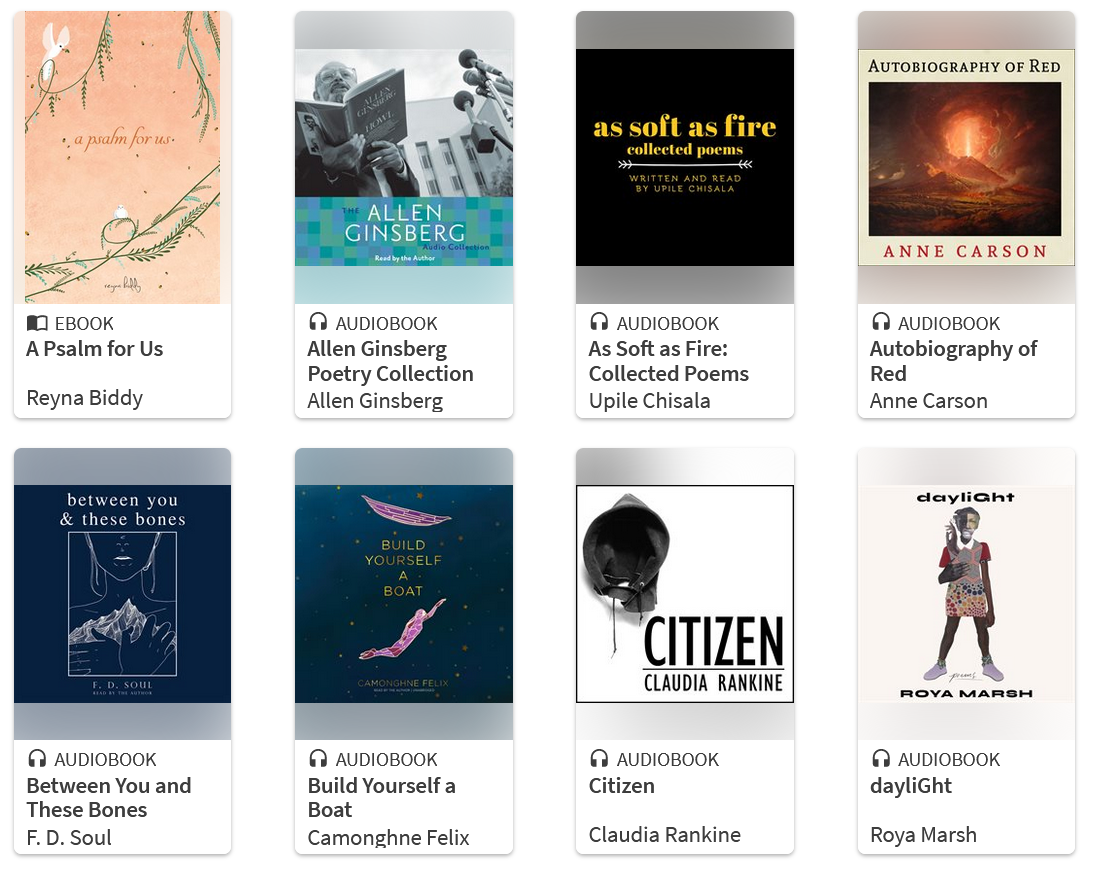 Lift Every Voice: The Enduring Power of Langston Hughes

It was 100 years ago, in June 1921, that a young Langston Hughes published what would become one of his best-known poems, “The Negro Speaks of Rivers.” He moved that fall into New York’s predominantly African American Harlem neighborhood and became a towering figure in the Harlem Renaissance artistic movement, promoting equality, condemning racism and injustice, and depicting Black culture, humor, and spirituality.

The Library celebrates the life and work the Missouri-born poet, playwright, and novelist in an online, multifaceted event coinciding with National Poetry Month.

The online event is part of a yearlong series, Lift Every Voice: A Nationwide Celebration of 250 Years of African-American Poetry, presented in partnership with the Library of America and the New York Public Library’s Schomburg Center for Research in Black Culture.

Tuesday, April 28, 2021  |  7 p.m.
The Library's Director of Branch Operations Cindy Hohl joined U.S. Poet Laureate Joy Harjo in an online conversation April 27, 2021, as part of PBS Books’ Trailblazing American Women Writers series. Harjo is serving her second term as the first Native American poet to serve as the nation’s poet laureate. Cindy, a member of the Santee Sioux Nation of Santee, Nebraska, is this year’s president of the American Indian Library Association. Watch video of the presentation and explore a list of related reading selections.

It was a hot June night in 1943, and Frances Angermayer could not sleep. So, she arose after midnight, went to her typewriter, and—in twenty minutes—wrote what was to become the most famous poem of World War II.

This edition of “What’s Your KC Q?” a partnership series with the Library and the Kansas City Star, explores the astonishing story of “Conversion,” a verse about a soldier’s talk with God that brought hope to millions of readers during the height of the war. The poet, an unassuming secretary from Kansas City, could not have foreseen that her simple composition would find its way into the hands and hearts of countless soldiers across the globe.