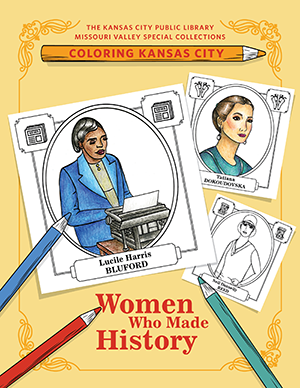 Break out the crayons and colored pencils and meet some amazing women from our community’s past.

In celebration of Women’s History Month, the Library showcases several remarkable women who have left their mark on the Kansas City region in Coloring Kansas City: Women Who Made History, a special, limited-edition coloring book curated and produced by the Kansas City Public Library’s Missouri Valley Special Collections (MVSC).

The book spotlights women from an array of backgrounds, cultures, and professions, from activists and entrepreneurs to artists and pioneers. Their legacies still resonate today, and the project serves as a creative and engaging introduction to their stories, connecting people of all ages to these important figures.

Beginning in mid-March, a limited number of physical copies will be available at Library locations; however, the book is also available online at kchistory.org/coloringkc. There, you can find additional profiles of women not available in the printed book, and profile sheets can be individually downloaded.

Among the women highlighted in the book:

Browse the full set of profiles and access digital files at kchistory.org/coloringkc. 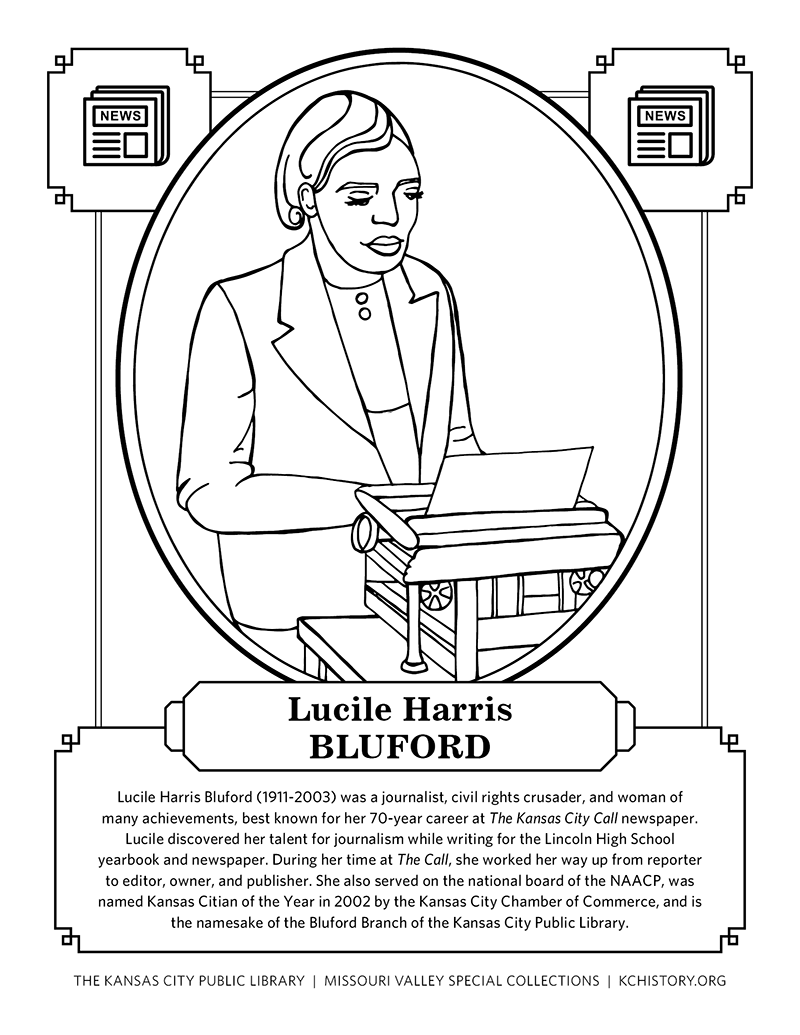 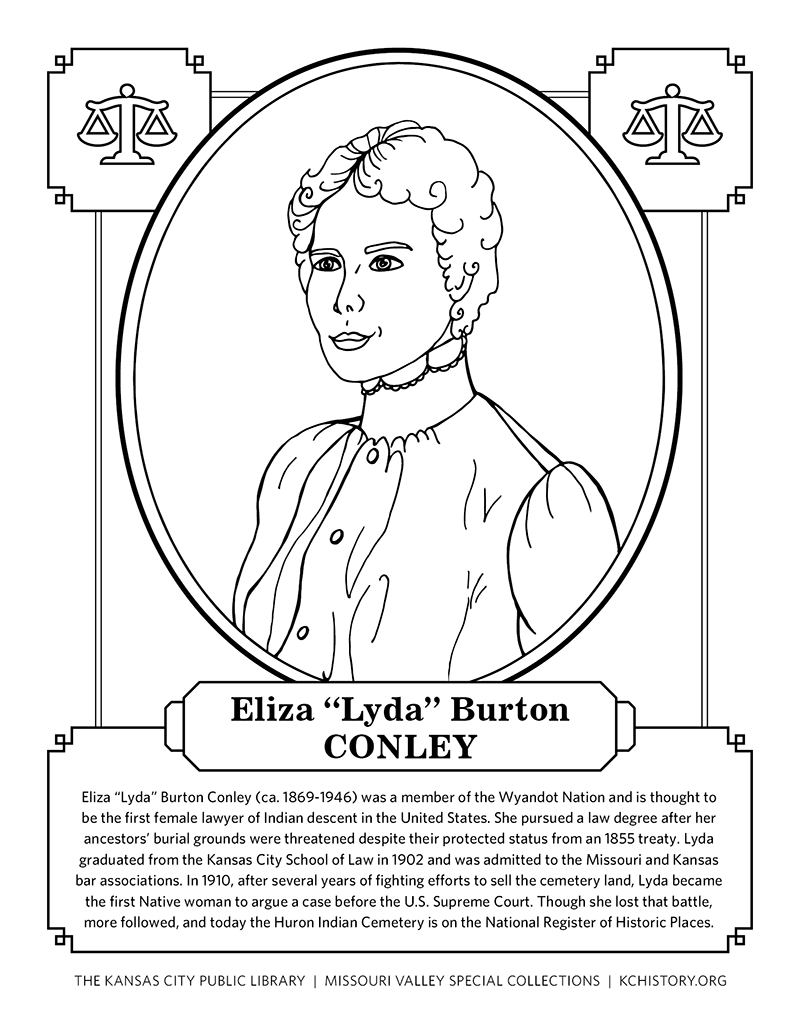 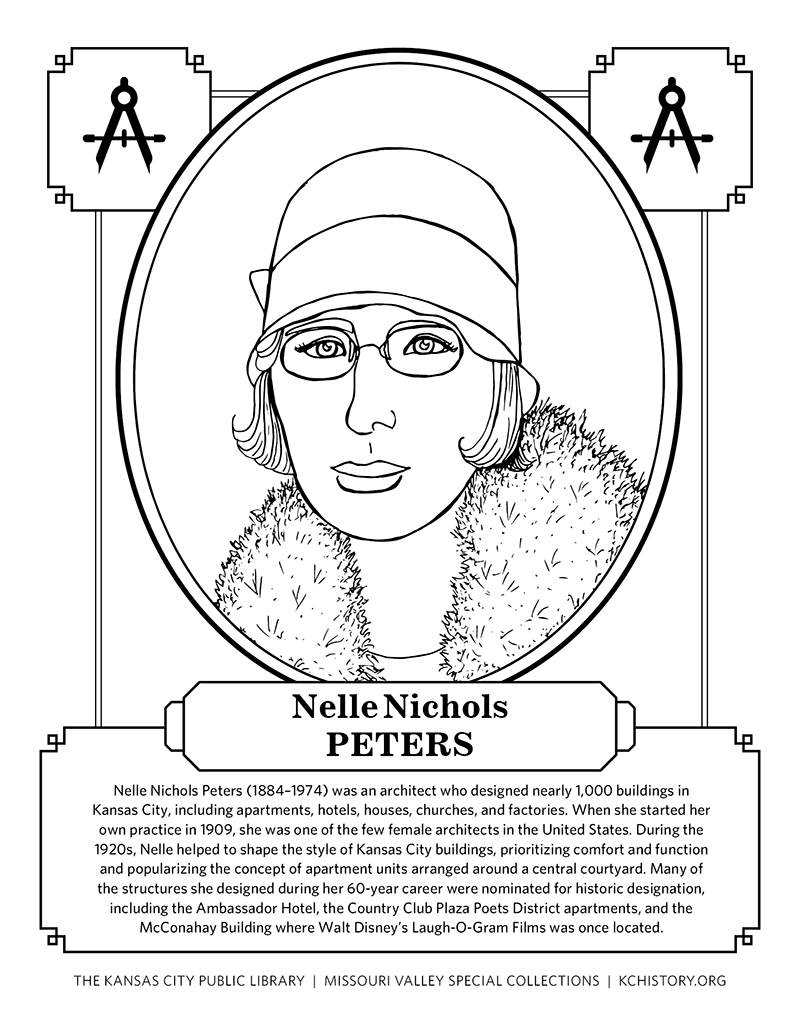 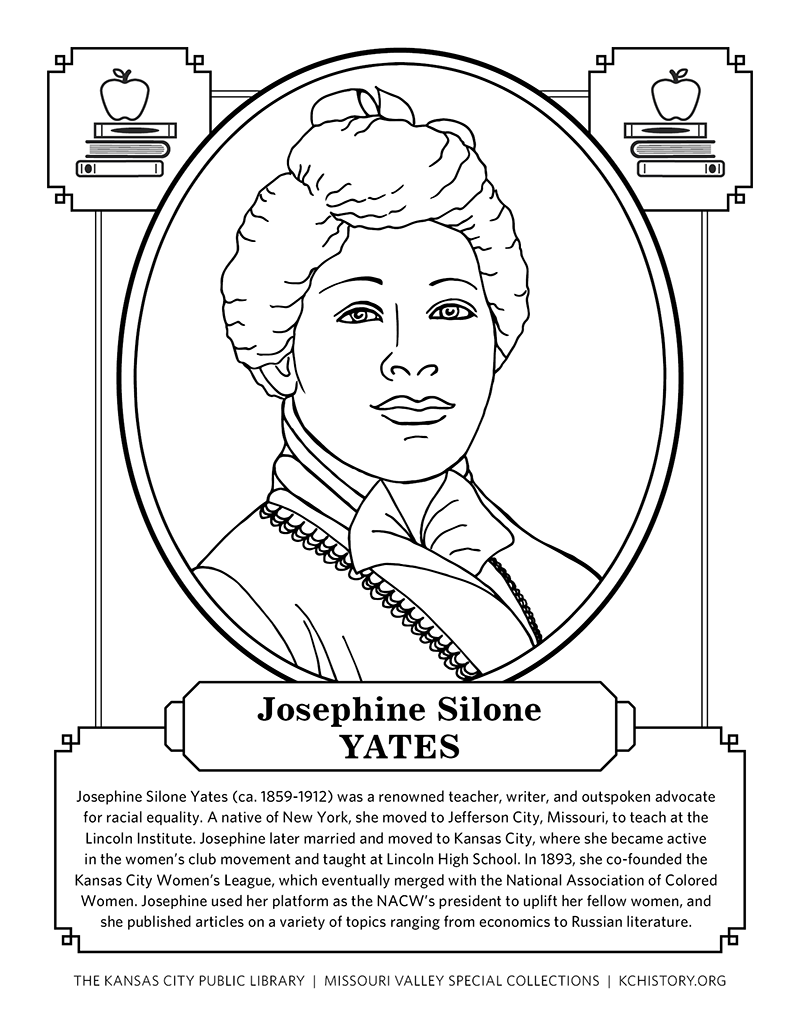 Using a coloring book as a way to bring attention to the accomplishments of women from KC’s past was an effort championed by Joanna Marsh, special collections librarian with the Missouri Valley Special Collections (MVSC). The idea came to her after MVSC staff learned of a program organized by the New York Academy of Medicine Library called #ColorOurCollections, in which cultural institutions convert images of items in their collections into digital coloring pages to share with the public.

“We liked this idea and wanted to participate,” Marsh says, “but I initially had trouble thinking of items within our collection that would make good coloring pages. So, having an art background, I couldn’t help but think of creating my own illustrations of subjects that I would personally like to color, which would be people—mainly these fascinating Kansas City women.

“I grew up in the area, but I had never heard of most of these women until I started working in Missouri Valley Special Collections handling reference requests. Certain that there would be others in Kansas City who would not recognize them, either, I saw the coloring book as a fun way to introduce people to them and maybe even inspire patrons to do more research. So I drew up some sketches, brainstormed ideas with my colleagues, and pitched the idea.”

Special collections manager Jeremy Drouin saw the value of this project, especially its potential to support MVSC’s local history mission. “I was intrigued when Joanna first proposed the idea of a coloring book spotlighting notable Kansas City women, and excited about the possibility of promoting Kansas City history in a non-traditional and fun way,” he says. “I was also very impressed after seeing Joanna’s early sketches, specifically how she was able to capture the essence of these women in her illustrations.” 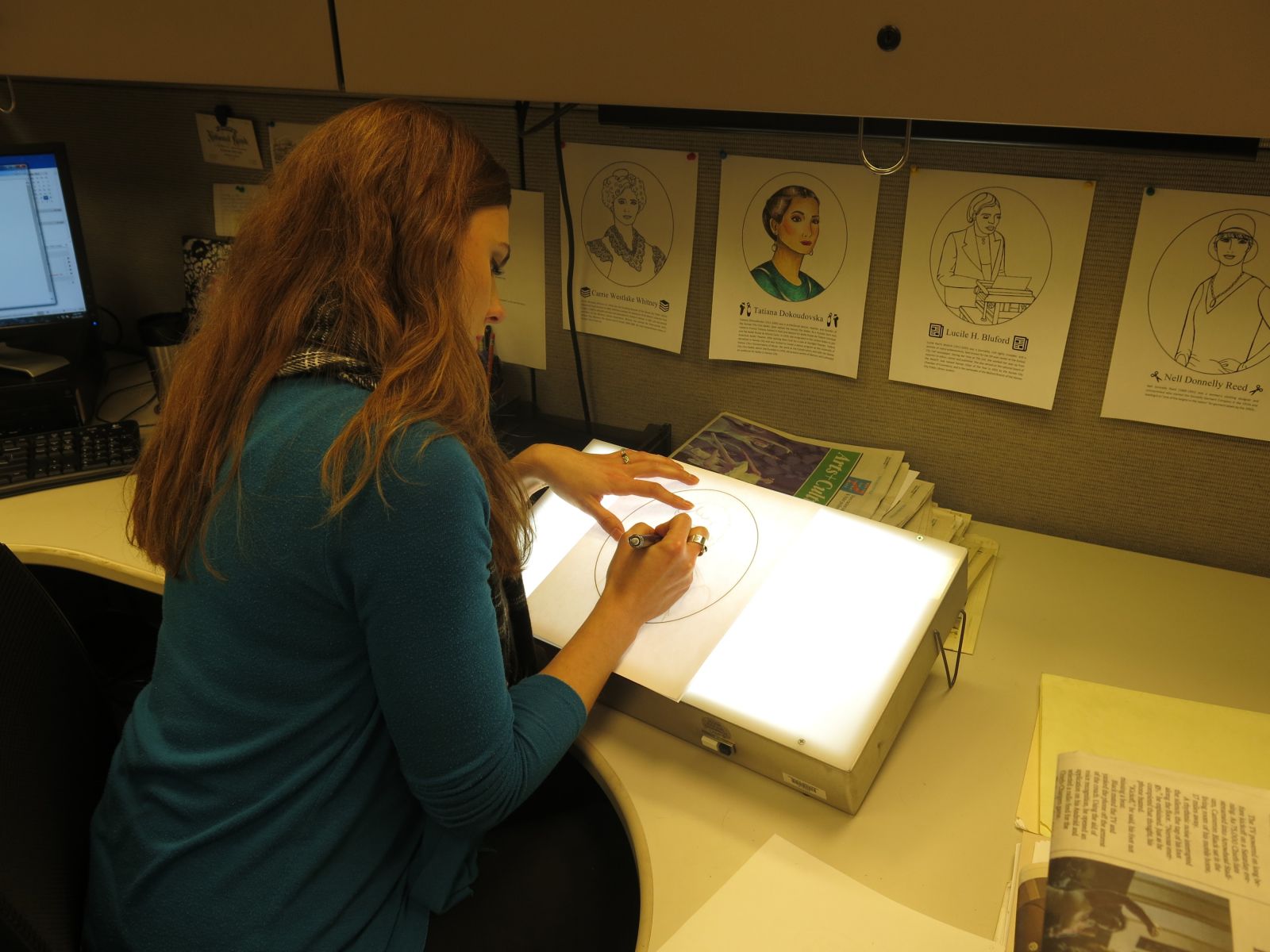 Marsh began compiling a list of potential colorable candidates by searching through the biographies available on MVSC’s website, KCHistory.org, consulting with other staff researchers, and referencing books such as Jane Fifield Flynn’s Kansas City Women of Independent Minds. An initial pool was narrowed to a smaller set, largely based on which subjects had high-quality images and historical information accessible through the MVSC collection for use as the basis for the coloring illustrations.

“I had to find a viable source image to work from, which was a challenge,” Marsh recalls. “For some women on my initial list—like [pioneer] Berenice Chouteau, who was said to be too busy to have her portrait done—there are simply no source images.”

As Drouin noted, “One coloring book is not nearly enough to tell the story of the amazing achievements of the many women who have left a lasting mark on Kansas City. Our hope in introducing Library patrons to this highlighted group is to motivate people to learn more about their achievements and those of other Kansas City women by visiting the Library, researching in the Missouri Valley Room, or visiting KCHistory.org.”

Much like the set of Black History Month posters and calendars the Library produces each February in coordination with the Local Investment Commission (LINC) and the Black Archives of Mid-America, the MVSC staff wanted to make the Women Who Made History materials easily accessible to the public. Once the set of illustrations was made and short biographies were written, Marsh and Drouin worked with the Library’s Public Affairs department to package the set of profiles into a proper coloring book. Digital copies of the sheets were also uploaded to the KC History site for easy access.

Impact Beyond the Pages

While primarily targeted to youth, the book and the lives of women it features can be appreciated by all.

As the project progressed, Marsh came to realize that the subjects’ biographies not only could inform youth—and adults—about their historical impact. They also had the potential to impart more personal lessons.

“I think this book can be for anyone,” Marsh says, “but I hope that it serves as inspiration for young women who are contemplating what path to take in life. I know it’s only a coloring book, but I hope that when young people open it they will learn from these women—that they will see the value in being true to themselves, following their intuition, and cultivating their talents.

“The women in the book are remarkable in the sense that they achieved so much, oftentimes in male-dominated fields, but what I actually find the most inspiring is that they made their mark on history by simply being themselves—by using their natural gifts and pursuing their passions unapologetically. Not to get too deep here, but I think many of us are content to live our lives avoiding a calling or letting our talents lie dormant. What makes these women so outstanding is that they pushed fear and adversity aside and actually did what they felt called to do—whether that was launching a business, fighting segregation, caring for children, or becoming an athlete or an artist or a musician."

Most likely, Marsh says, none were seeking recognition. “Rather, their fame was just a side effect of the work they loved and the vivacity it brought to them," she says. "That’s the biggest takeaway for me—to remind people that, even though we think we’re just ordinary, we all have the capacity to be extraordinary in some way. We, too, could be the women who made history.”

Access the coloring book and read the profiles at kchistory.org/coloringkc.

The coloring book project was made possible in large part due to funds from the Missouri Valley Room Club, which helps the Library acquire and preserve items of historic importance to the region. Additional support also came from the Central Library, whose staff opted to use a financial gift from the Friends of the Kansas City Public Library to help fund the project.

“There are many ways for the public to support Kansas City history and MVSC’s mission to preserve it," Drouin says. “One of the easiest is to attend local history programs and exhibits at the Kansas City Public Library and by utilizing MVSC collections and resources. It takes considerable funding to acquire, preserve, catalog, and house historical collections at the Library and make them accessible to the public. Those people who are especially passionate about Kansas City history and the mission of MVSC might also consider joining the MVR Club or making a monetary donation.”