A Colorful Centennial Commemoration of Women's Right to Vote 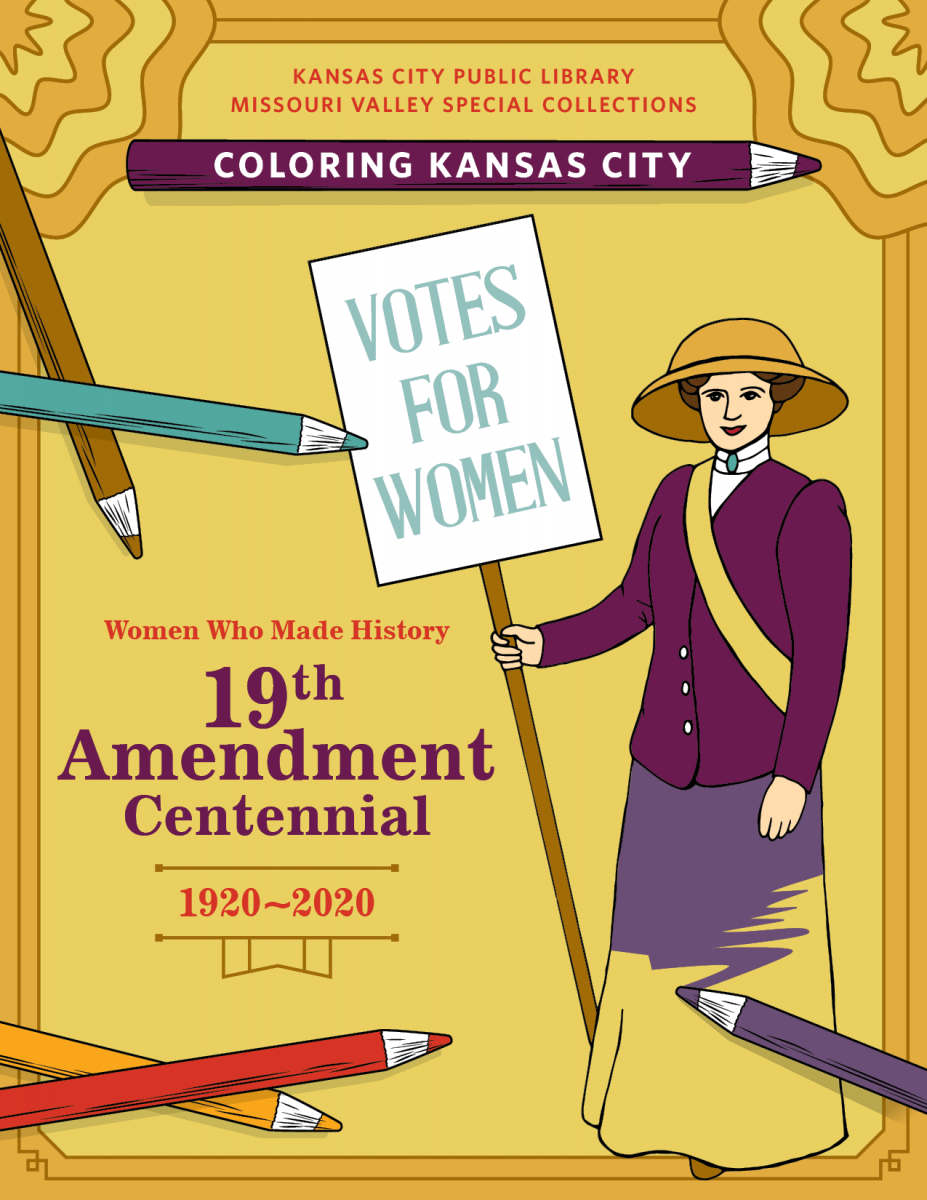 One hundred years ago the 19th Amendment to the Constitution was ratified, giving women in the U.S. the hard-won right to vote. In commemoration of this anniversary, the Library’s Missouri Valley Special Collections has produced a new history-themed coloring book that highlights several local women who took part in the suffrage movement: Coloring Kansas City: 19th Amendment Centennial.

A limited number of free copies will be available at KC Library locations beginning in March 2020 for Women’s History Month. A digital edition is available online at kchistory.org/coloringkc; you can download the entire booklet as well as individual profile sheets.

Among the women highlighted in the book:

Production of this project was made possible by a gift from The Kansas City Athenaeum and through the generosity of supporters of the Kansas City Public Library and of the Missouri Valley Special Collections.

Browse the digital version and view the previous Coloring Kansas City edition, Women Who Made History, at kchistory.org/coloringkc. 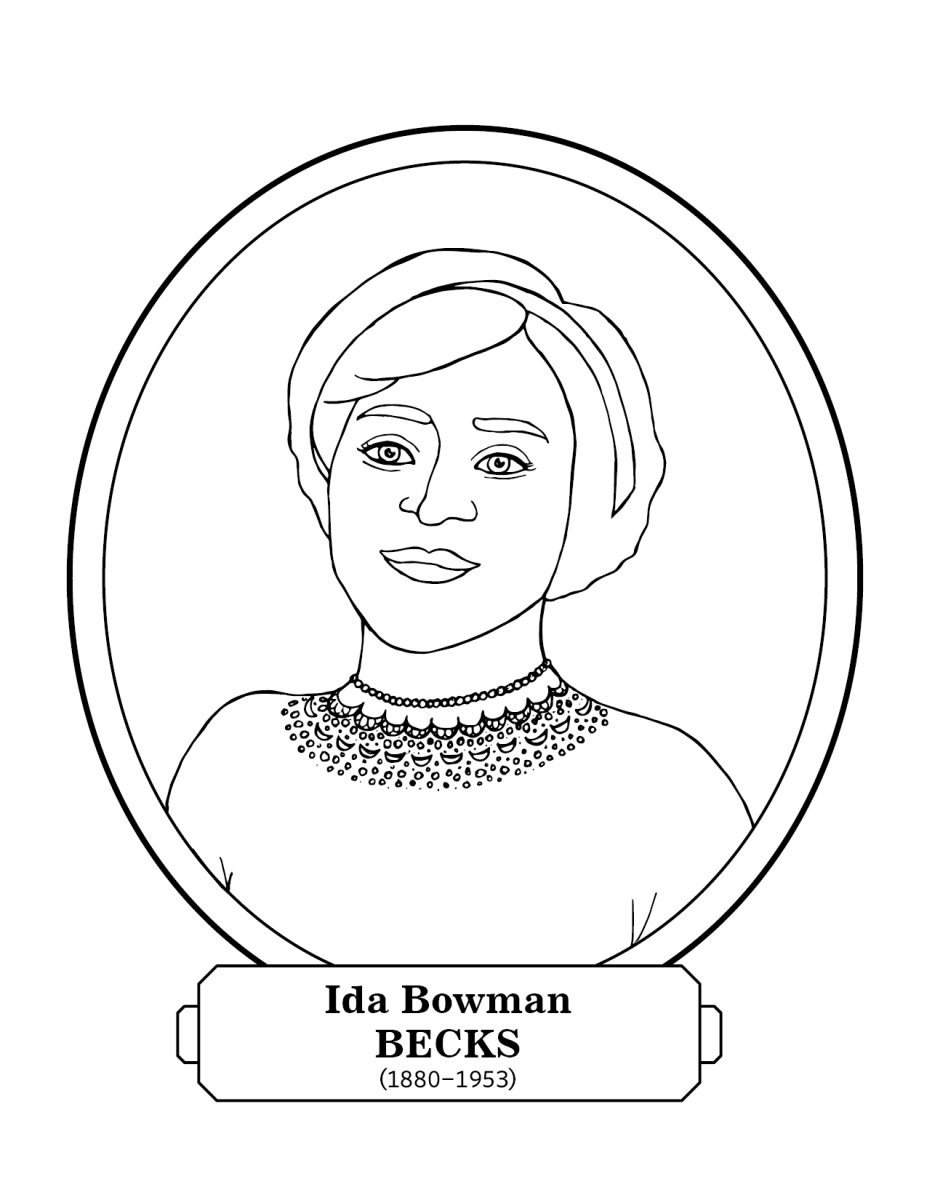 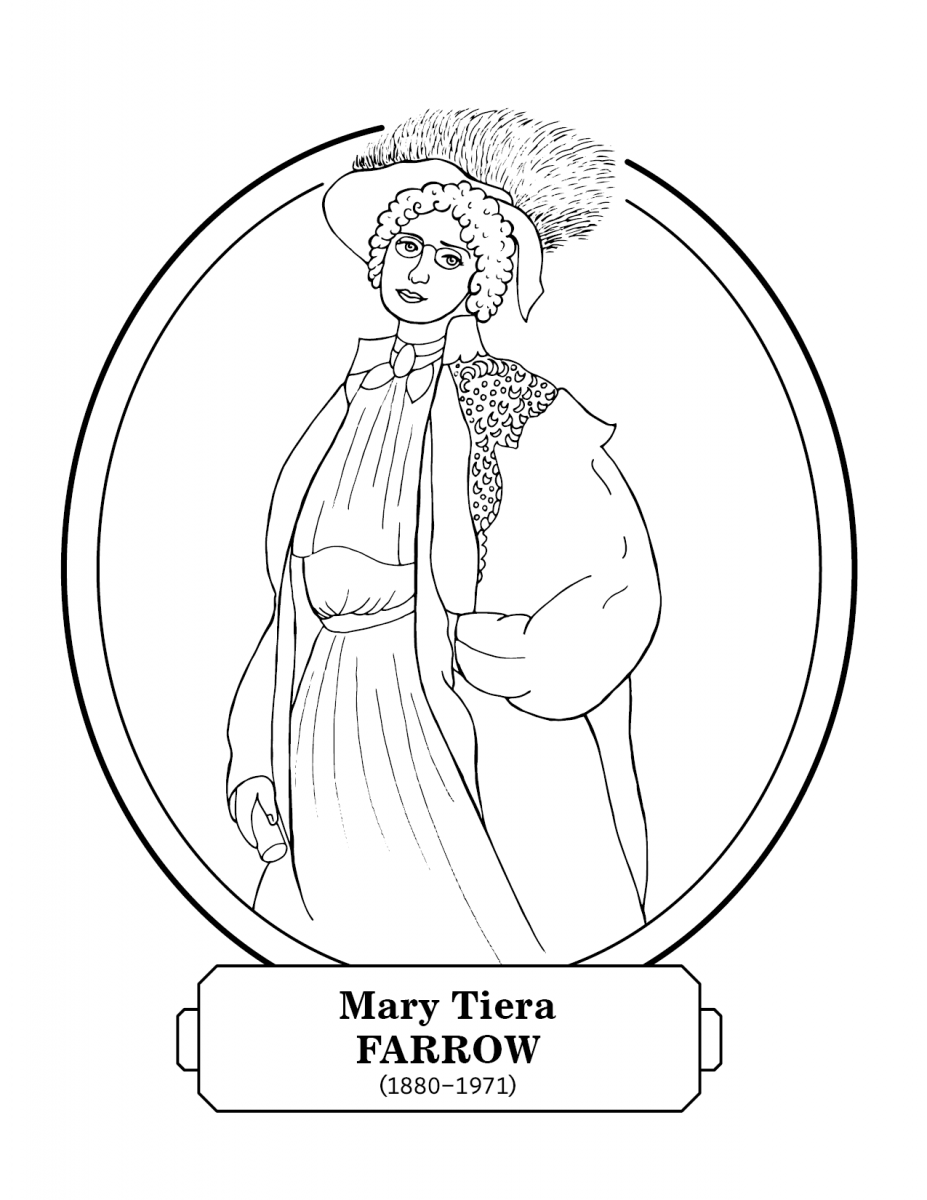 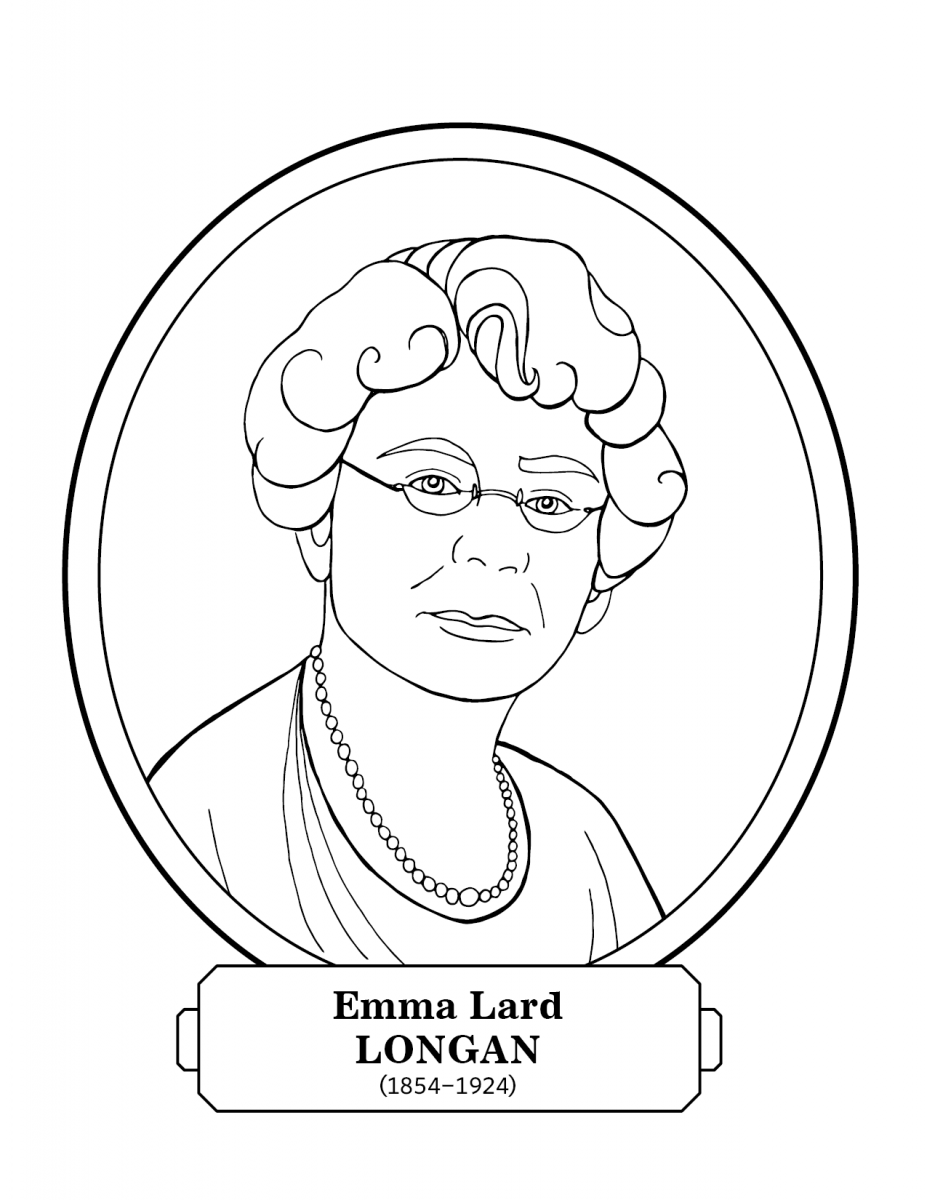 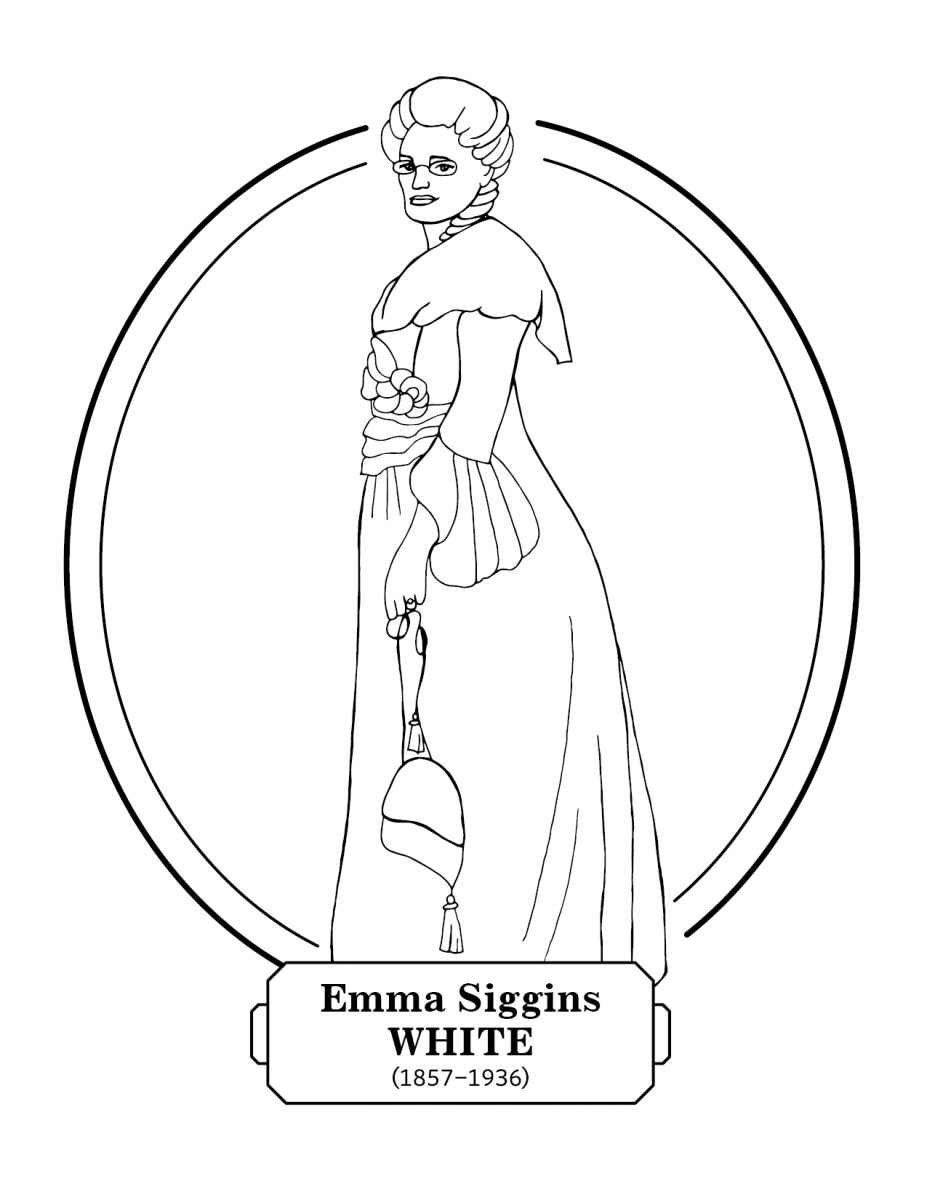 About the Coloring KC Project

Selections of this piece taken from "Picture This: Library Coloring Books Tell the Stories of Notable Women in KC History," by Steve Wieberg, special to KC Studio magazine.

You might not be familiar with the women. Or even the achievements. History, shall we say, occasionally needs a little coloring in.

Joanna Marsh and the Kansas City Public Library are doing just that. Two years ago, in a novel approach to highlighting local history, they created a special-edition coloring book spotlighting a dozen “remarkable women from Kansas City’s past.” Offered free, it proved popular among children’s librarians, teachers and Library patrons. All 2,000 copies were quickly snapped up (though they remain downloadable at kchistory.org/coloringkc).

As the country now prepares to celebrate the 100th anniversary of the ratification of the 19th Amendment, Marsh and the Library are back with a second coloring book featuring the stories — and images — of several of the region's most notable contributors to the women’s suffrage movement.

“Not to get too deep here,” Marsh says, “but I think many of us are content to live our lives avoiding a calling or letting our talents lie dormant. What makes these women outstanding is that they pushed fear and adversity aside and actually did what they felt called to do, whether that was launching a business, fighting segregation, caring for children or becoming an athlete or an artist or a musician.

“I’m betting that none of them sought to be recognized. Rather, their fame was just a side effect of the work they loved and the vivacity it brought to them. That’s the biggest takeaway for me — to remind people that, even though we all think we’re just ordinary, we all have the capacity to be extraordinary in some way.”

The idea for the coloring books arose from the New York Academy of Medicine Library’s annual #ColorOurCollections campaign, which invites scientific institutions, history museums and other cultural centers to showcase images from their collections as black-and-white drawings suitable for coloring. Marsh, a special collections librarian, and her colleagues in KCPL’s Missouri Valley Special Collections wanted to submit something from its holdings, but wanted to take a different approach.

They found inspiration in a patron’s request for information on Eliza Burton Conley, a Wyandot Indian descendant who became the first woman admitted to the Kansas State Bar and later the first female Native American to argue a case before the U.S. Supreme Court. “I hadn’t heard of her, and I’ve lived here my whole life,” Marsh says. “I thought, ‘‘What a cool way to introduce people to these remarkable women!” 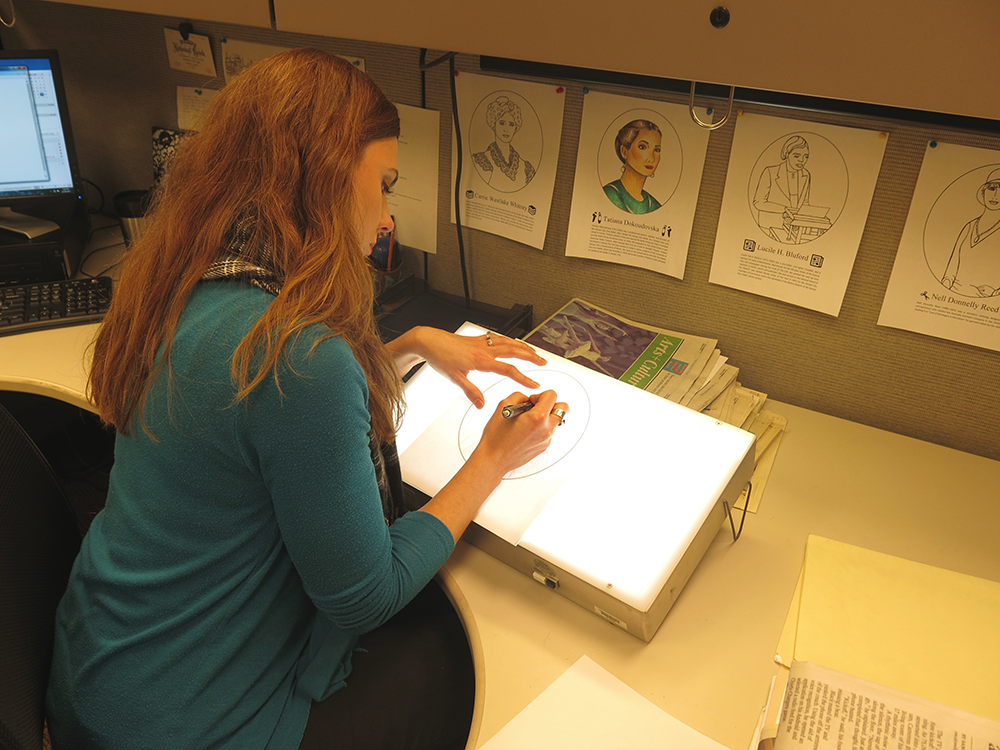 MVSC's Joanna Marsh creates drawings for the Women Who Made History book. 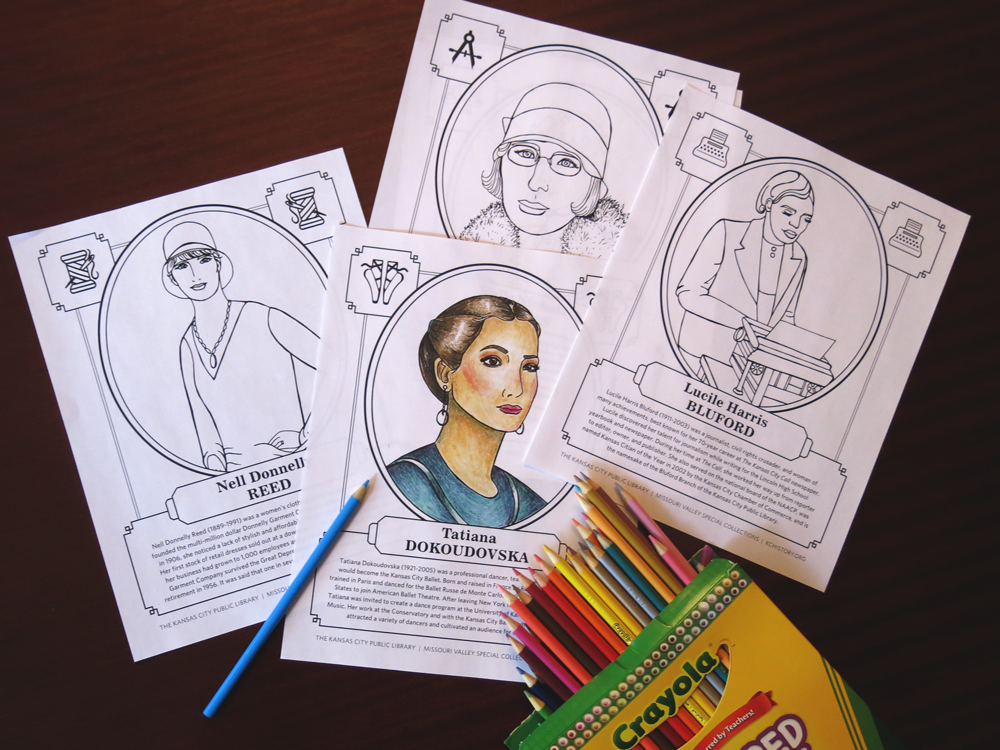 Spread of proile pages from the original coloring book.

An art minor in college at Northwest Missouri State University — with an artistic lineage going back to her grandmother, a card illustrator for Hallmark — Marsh did a couple of trial sketches, brainstormed with co-workers on other historical subjects and pitched the idea to Missouri Valley Special Collections Manager Jeremy Drouin. Rather than offering a single image to the New York Academy of Medicine Library, they produced their own book.

The first Coloring Kansas City book was released in March 2018 and featured the likes of Lucile Bluford, the influential editor, owner and publisher of the Kansas City Call, and pioneering jazz pianist and composer Mary Lou Williams. Conley also was included.

Marsh works from photographs in preparing her freehand sketches, which are accompanied in each book by brief biographies drawn from special collections resources. “It’s a fun thing,” Marsh says, “but we want it to be educational and a way to highlight what we have here.”

Her first inclination was that the books would reach the growing number of adults who’d taken to coloring books. But there is a natural, and welcome, appeal to younger audiences, too.

“The women in the book(s) are remarkable in the sense that they achieved so much, oftentimes in male-dominated fields,” Marsh says. “But what I actually find most inspiring is that they made their mark on history by simply being themselves, by using their natural gifts and pursuing their passions unapologetically.

“I know that it’s only a coloring book. But I hope that when young people open it, they will learn from these women — that they will see the value in being true to themselves, following their intuitions and cultivating their talents.”
Enjoy both coloring books at kchistory.org/coloringkc.
Explore more local history at kchistory.org.