Celebrating the 5th Anniversary of the Civil War on the Western Border Website: 153 Years Post-War

Post date:
Wednesday, October 10, 2018
Five years ago, the Kansas City Public Library and its archival partners announced the launch of the website Civil War on the Western Border: The Missouri-Kansas Conflict, 1854-1865. The numbers since then speak to its impact: some 608,000 online visitors and more than 1.3 million page views, with usage continuing to climb.

Beyond that, the site received professional recognition in the form of a favorable review in the Journal of American History and four national awards, including the Roy Rosenzweig Prize for Innovation in Digital History from the American Historical Association.

That success speaks to the vital role often played by public libraries and their partners in the collection, organization, preservation, and dissemination of knowledge about local history to students and broader public audiences. More than anything, the website serves as a conduit to a deep, rich history that shapes the character of Kansas City and the surrounding region to this day.

To learn about the Civil War along the Missouri-Kansas border is to understand our cultural roots and the political or socioeconomic challenges that, in many cases, we still face. 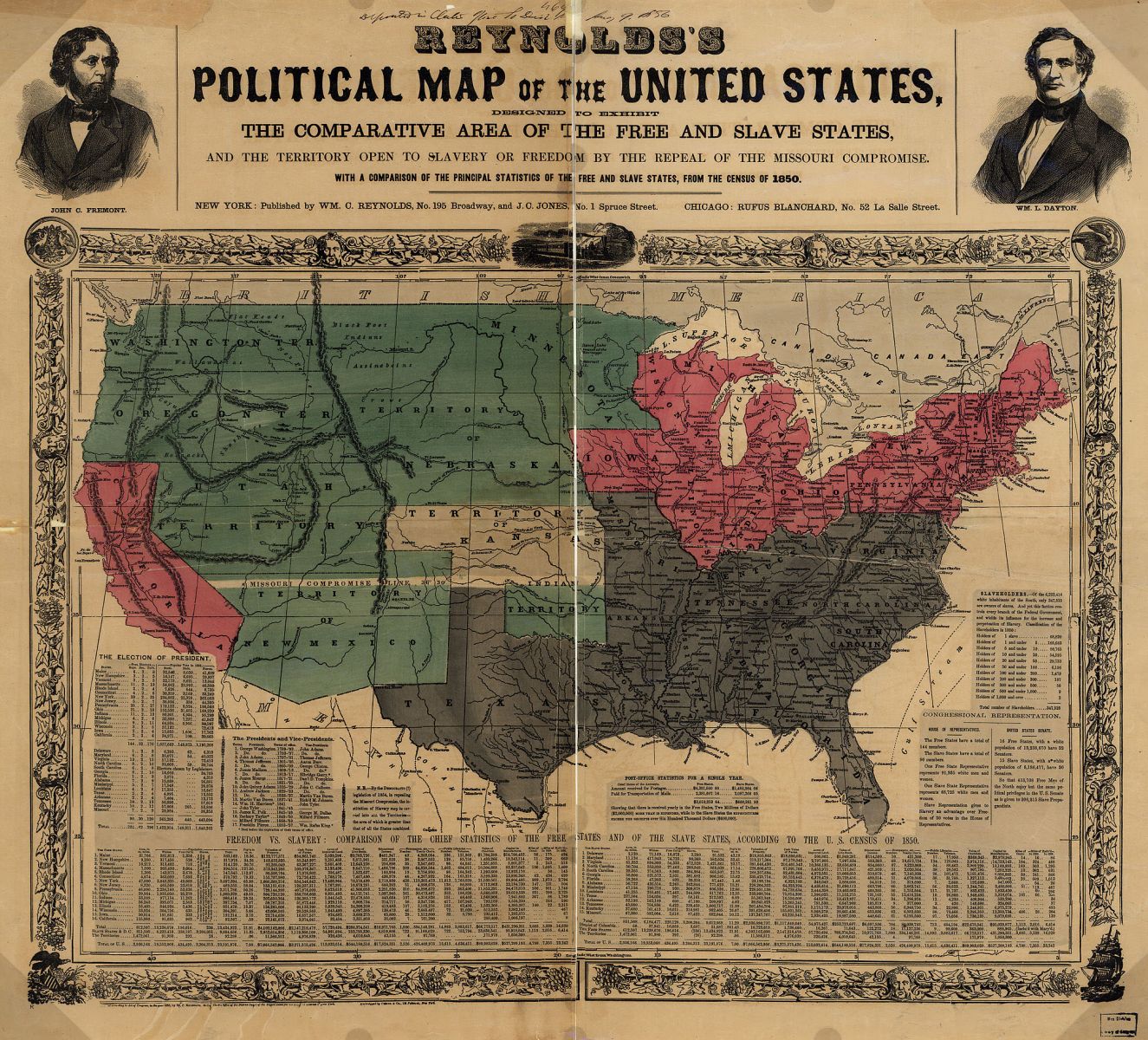 Political map of the United States showing free and slave states and the Kansas Territory, ca. 1856. Library of Congress.
War came to the Missouri-Kansas border early; politically motived violence erupted soon after the passage of the Kansas-Nebraska Act (1854), a law that left the legal status of slavery in the future state of Kansas open for its white settlers and territories representatives to decide. Previously, congressional compromises had cautiously maintained a balance in numbers between North and South, free and slave states, as they were admitted into the Union. The Kansas-Nebraska Act, however, incentivized settlers to move to Kansas for political reasons, Missouri slaveholders to cross the border to vote illegally in Kansas’s territorial elections, or for Kansas abolitionists such as John Brown to emancipate slaves through violent means, up to and including small-scale battles and massacres of slaveholders. 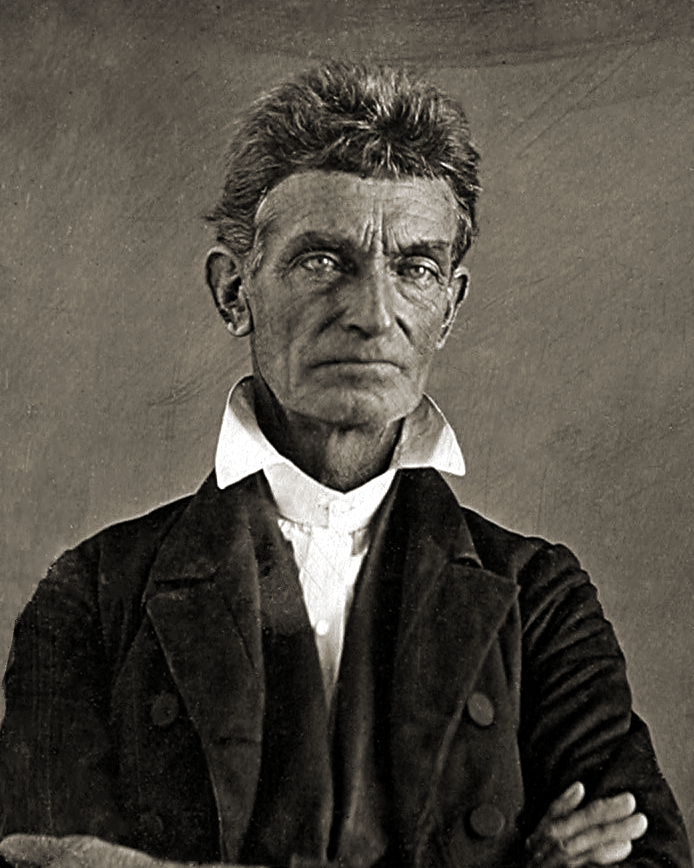 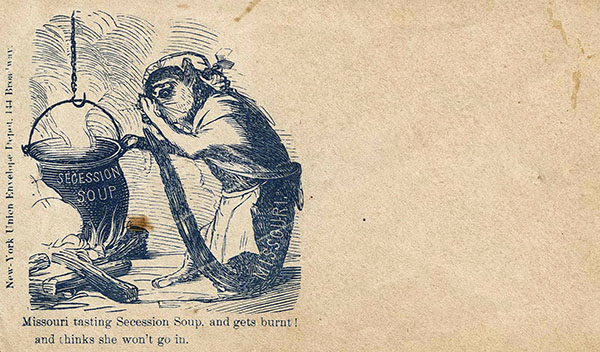 Cartoon referencing Missouri’s flirtation with secession, no date. Courtesy of the University of South Carolina.

Tensions surrounding “Bleeding Kansas” flared at the national level in 1856 when Rep. Preston Brooks used his cane to attack Sen. Charles Sumner on the floor of the U.S. Senate, nearly killing him. Missouri held a constitutional convention to consider secession, but remained in the Union by a thread – its governor, Claiborne Fox Jackson, did not remain, and a portion of the state legislature and Missouri State Guard followed him into exile in Confederate Arkansas. Despite its official status as a Union state, Missouri remained a fertile ground for guerrilla “bushwhackers” and the recruitment of regular Confederate soldiers throughout the war. 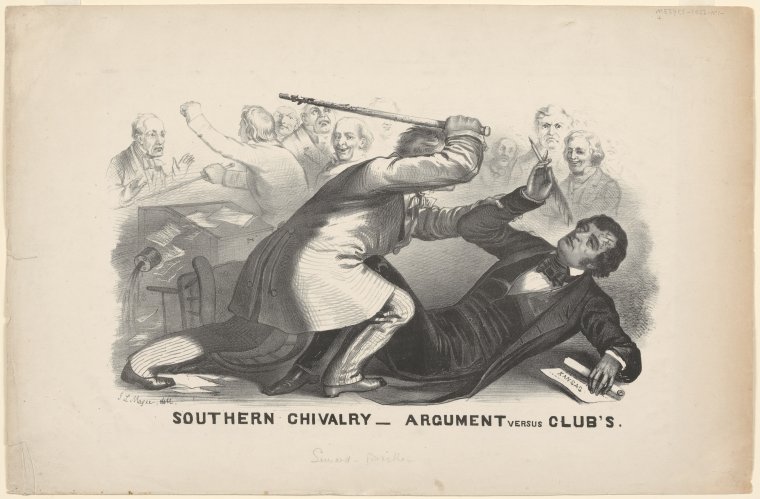 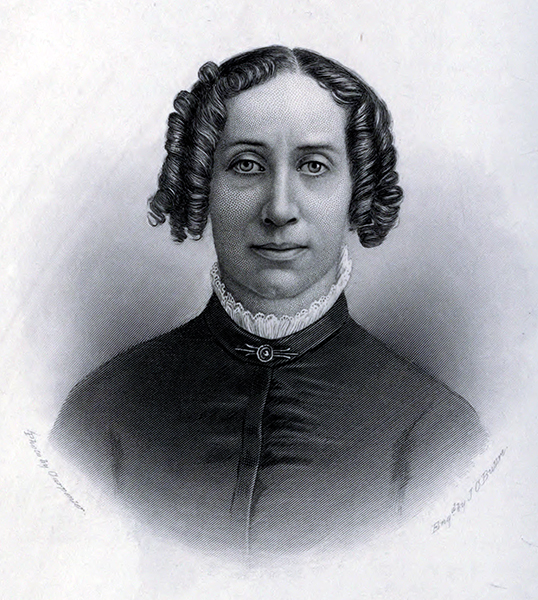 Engraving of Clarina Nichols, prominent editor and abolitionist known for her work on the Underground Railroad, 1887. Internet Archive. 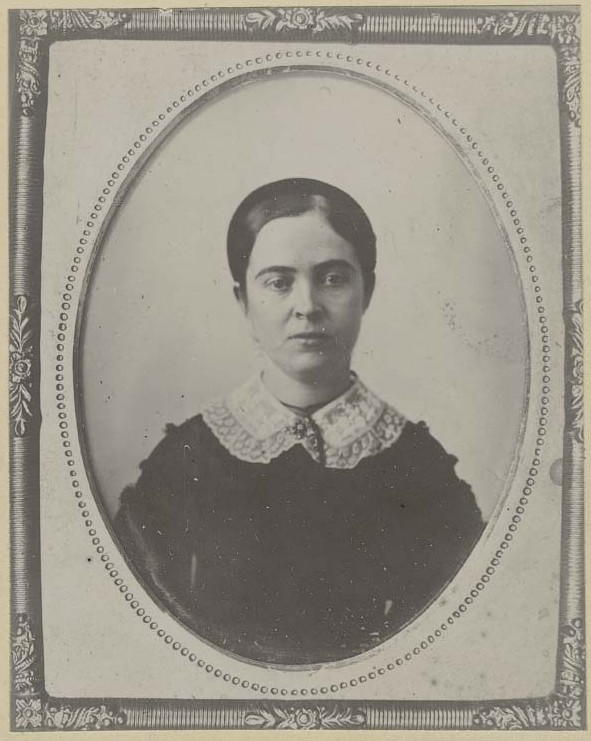 Sara Robinson, Free-Stater and author of Kansas: Its Interior and Exterior Life, in 1857. Courtesy of the Kansas Historical Society. 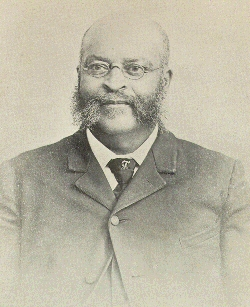 Those with opposite dispositions and notoriety are easy to find on either side. The Bushwhackers included William Clark Quantrill – famous for his raid on Lawrence that killed upwards of 180 men and teenage boys – and his lieutenant William T. Anderson, who surely earned his nickname “Bloody Bill.” Their attack was motived in part by the collapse of a Union prison in Kansas City (near the present-day Sprint Center) that killed Anderson’s sister and several other women suspected of aiding bushwhacker activities. Quantrill’s Raiders even included a very young Jesse James and brother Frank, whose legacies are explored here by two-time Pulitzer Prize-winner T. J. Stiles.

In retaliation for Quantrill’s Raid on Lawrence, Union General Thomas Ewing Jr. issued the infamous General Order No. 11, which forcibly removed the rural populations of Jackson, Cass, Bates, and northern Vernon counties. Ewing signed the orders at the District of the Border Headquarters, then located at the Pacific House Hotel, a building that still stands in the River Market area today.

The Civil War in this region culminated with a massive raid led by Confederate General Sterling Price. Price’s Raid traversed much of Missouri, and reached its apex at Westport, Missouri, near today’s Country Club Plaza. The Battle of Westport (October 23, 1864) involved tens of thousands of soldiers, claimed some 1,500 lives, and is remembered as the largest battle west of the Mississippi River. It also marked the end of serious Confederate operations in Missouri and a path toward the end of the war itself. 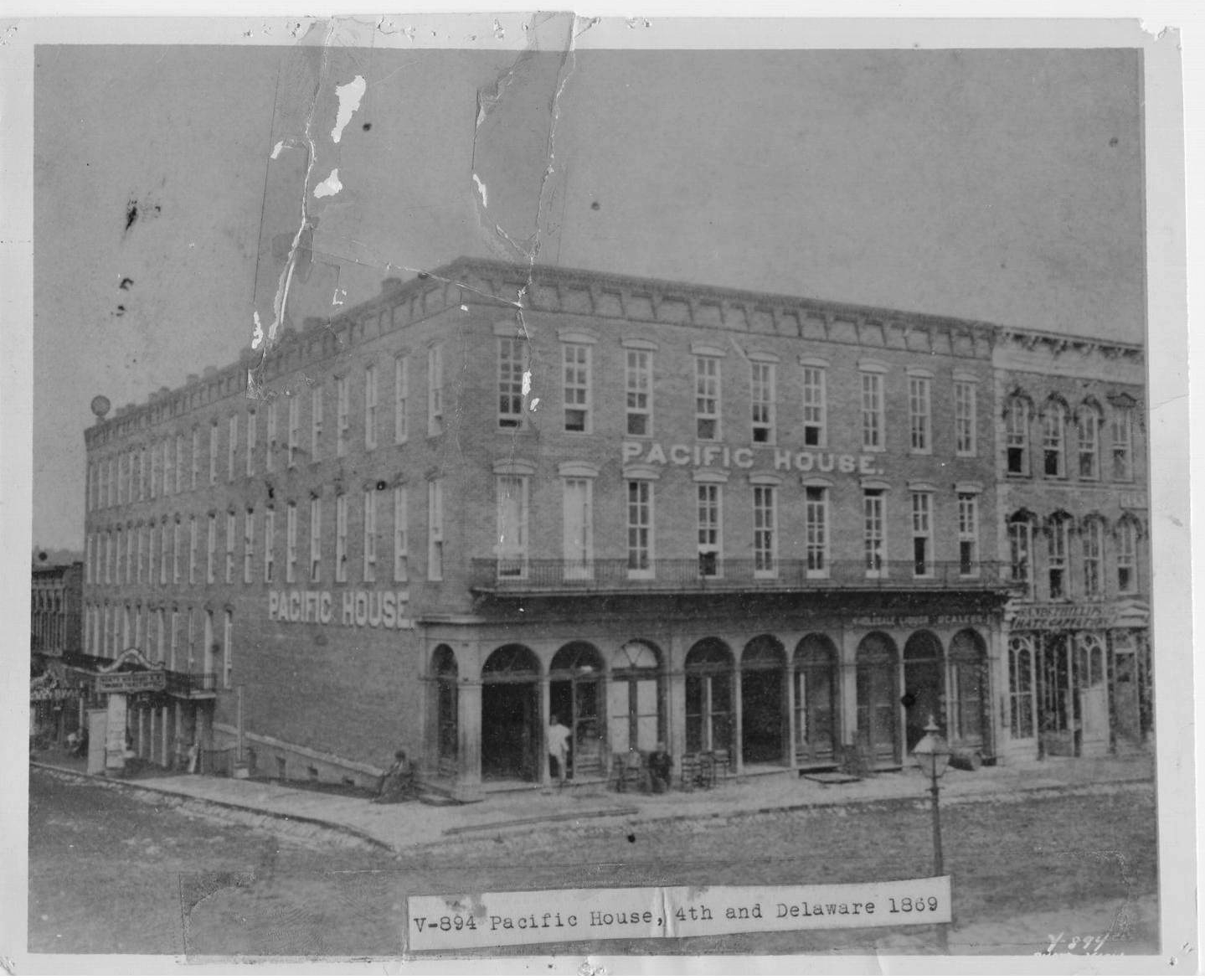 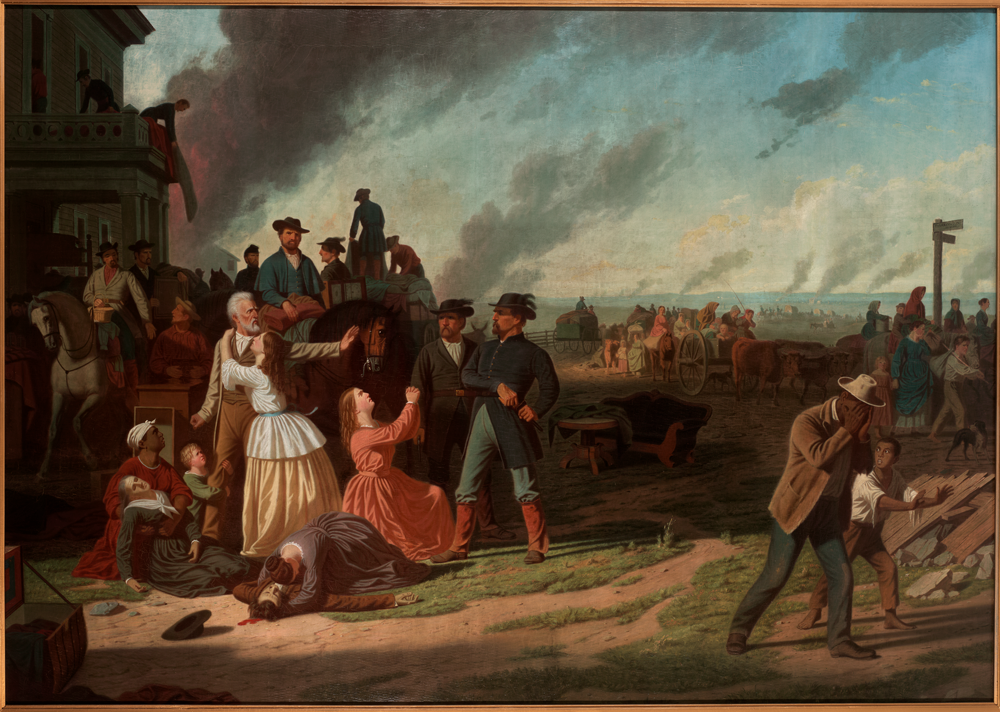 Martial Law or Order No. 11, painting by George Caleb Bingham, 1868. Courtesy of the State Historical Society of Missouri-Columbia. reproduction appears behind the circulation desk of the Central Library.

The Civil War in this region culminated with a massive raid led by Confederate General Sterling Price. Price’s Raid traversed much of Missouri, and reached its apex at Westport, near today’s Country Club Plaza. The Battle of Westport (October 23, 1864) involved tens of thousands of soldiers, claimed some 1,500 lives, and is remembered as the largest battle west of the Mississippi River. It also marked the end of serious Confederate operations in Missouri and a path toward the end of the war itself. 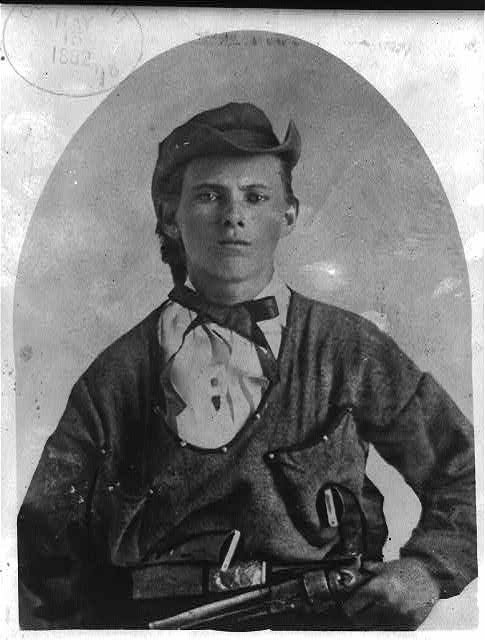 A young Jesse James in 1864. Library of Congress.

A century and a half later, the Library celebrates the Civil War on the Western Border website and its commemoration of these and other historical events along the border.

One more outgrowth of its success: The Kansas City Public Library and its partners have produced a similar website about a very different but equally fascinating and transformative period in Kansas City’s history, The Pendergast Years: Kansas City in the Jazz Age and Great Depression. The Library continues to update its existing websites with additional content, and more thematic sites are on the way.