An Artist at Home in America: Michael Mardikes’ Photographs of Thomas Hart Benton

Post date:
Wednesday, November 17, 2021
In 1956, Thomas Hart Benton invited young photographer Michael Mardikes into his Kansas City studio and home. In their time together, Mardikes took 1,080 photos of the famed painter at work and at rest with his family.

But only four photographs were ever published. Mardikes, 93, filed away the remaining negatives for 65 years.

Now 32 prints are on display as part of the exhibition, “An Artist at Home in America: Michael Mardikes’ Photographs of Thomas Hart Benton.” The show, which opened November 20 in the Central Library’s Rocky and Gabriela Mountain Gallery, offers the first public view of these images. 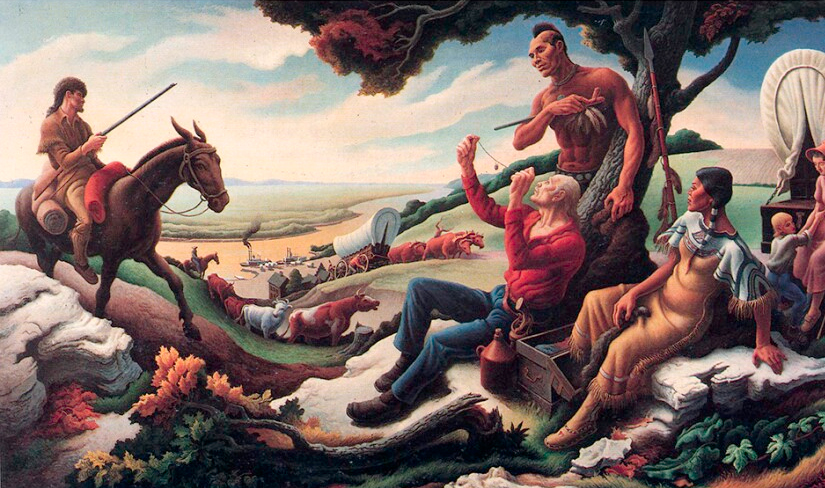 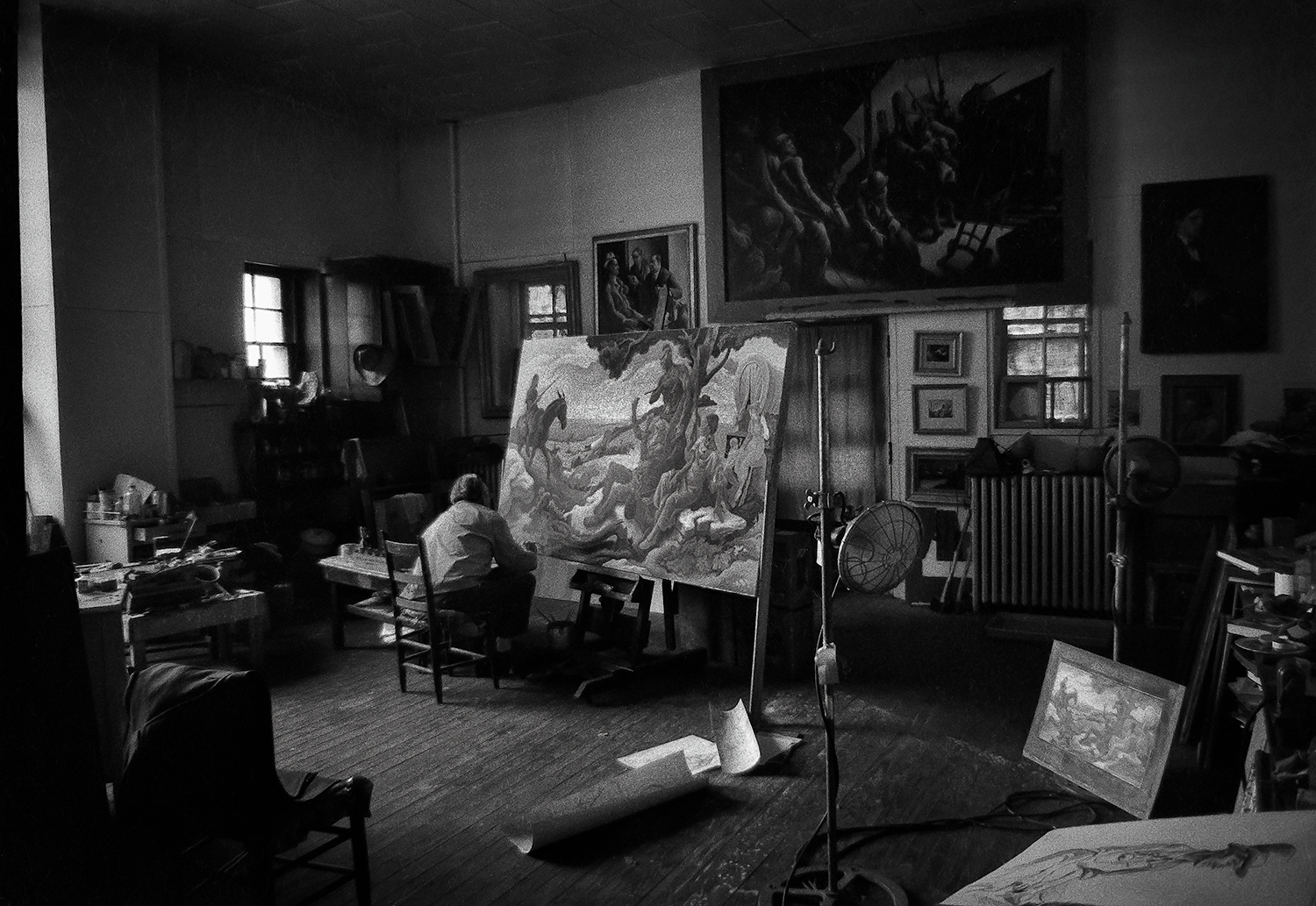 Benton works on his painting in his home studio.

The months Mardikes and Benton spent together were those when the artist was working on a commission from the River Club in the Quality Hill neighborhood of Kansas City, Missouri. Benton depicted Native Americans trading in the West Bottoms, which the club overlooks to this day. The painting shows a congenial meeting of two disparate cultures and is called “Trading at Westport Landing” or “Old Kansas City.” In recent years, critics have commented that the scene fails to address the violence and displacement that colonialism wrought on indigenous communities.

In his speech at the River Club during the painting’s unveiling, Benton described the work as “an imaginary representation of Kansas City in her first years, in the years, say, between 1840 and 1850. It symbolizes the adventurous trading spirit that motivated Kansas City’s early days, a spirit which, in different form, still is here.”

But this wasn’t the only painting he had in the works. According to those who knew him, Benton had a very strict work ethic and kept studio hours from sunrise to sunset most days. The River Club mural was one of several that he completed that year, including one for Lincoln University and another for the Harry S. Truman Presidential Library.

By the time Benton and Mardikes met through a mutual acquaintance, Benton was Missouri’s most famous artist, part of the regionalist triumvirate alongside Grant Wood of Iowa and Kansan John Steuart Curry. In contrast, Mardikes, 29 at the time, worked the night shift at the Ford plant in Claycomo.

Mardikes ultimately decided against a career in photography and retired from a position in administration at the University of Missouri-Kansas City after 36 years. Benton made paintings, murals, drawings, and lithographs until his death in 1975 at age 85.

During the sessions, Mardikes made a point of closely observing Benton at work rather than questioning him about technique, but his images serve as a study in artistic process all the same. The photos chronicling Benton’s work on “Trading at Westport Landing,” a 50-by-89-inch egg tempera on canvas mural commissioned by the River Club in 1955, offer insight into his process. 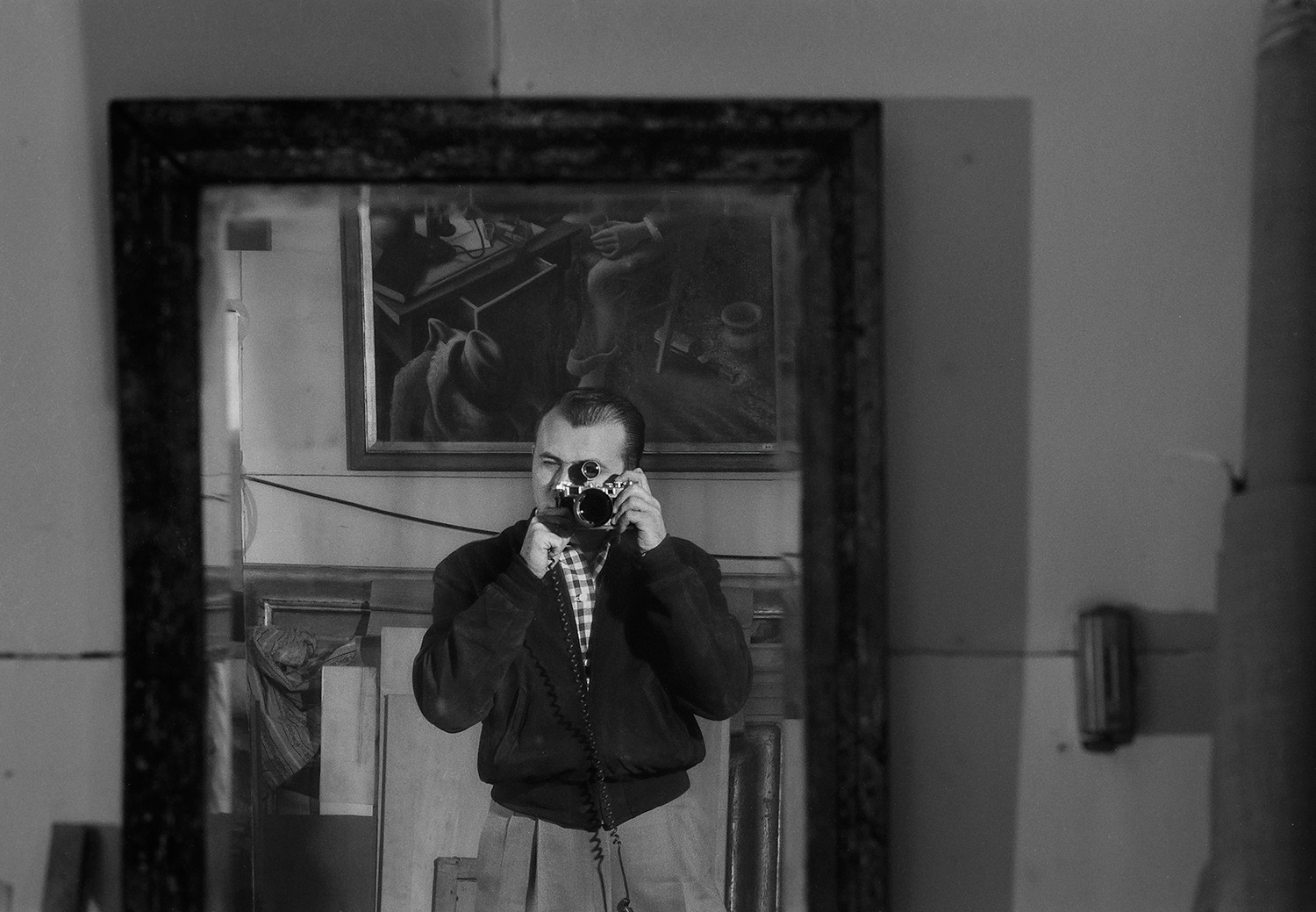 Self-portrait of Mike Mardikes, photographed in a mirror in Benton's home. 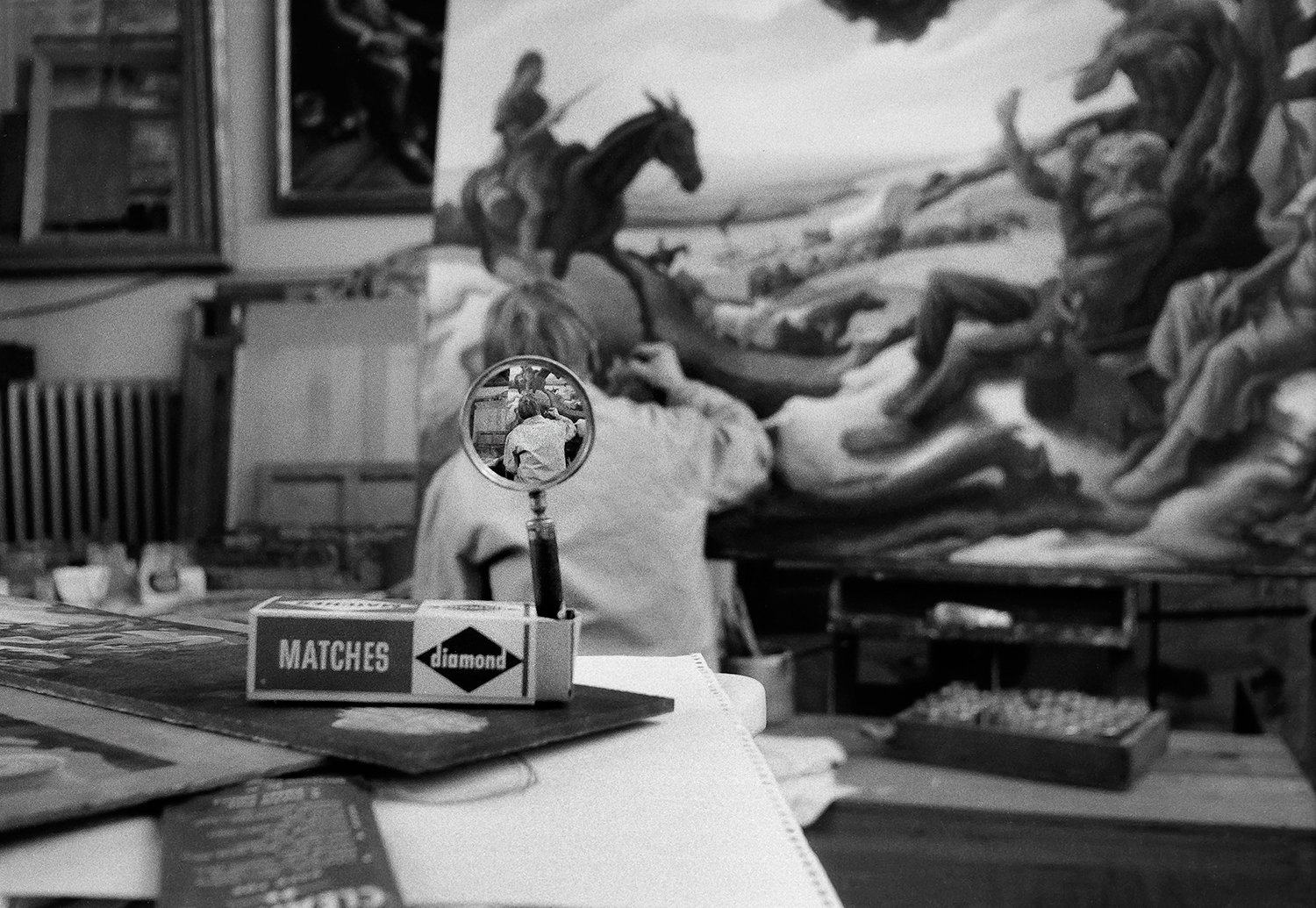 Photo of a diminishing glass tool Benton used in his work.

For instance, several of the photos in the exhibition feature a diminishing glass, a tool that resembles a magnifying glass, but which serves the opposite purpose. Benton used the glass to replicate standing at a distance from a large work like the one in progress at the time for the River Club. Mardikes’ photos capture others viewing Benton’s work through the same lens, suggesting a fresh perspective on the work both within the framework of the photo and as far as today’s viewer is concerned.

Use of the diminishing glass also features in Mardikes’ photographic composition. The photographer contrasts the circular shape of the glass with the rectangular canvas in its line of sight as well as the angular nature of some of Benton’s featured subjects.

Finally, the exhibition is bookended by the visual documentation of the May 12, 1956, unveiling of the work. The occasion appears celebratory and well attended, and the Kansas City Star reported that Benton gave a rousing speech with “characteristic abandon.” Also, he reportedly played a harmonic accompaniment with a group who sang “Oh, Susanna” with singer Pete Seeger, who was in attendance.

“An Artist at Home in America” runs through Sunday, May 15, 2022 and is sponsored by the Richard J. Stern Foundation for the Arts.