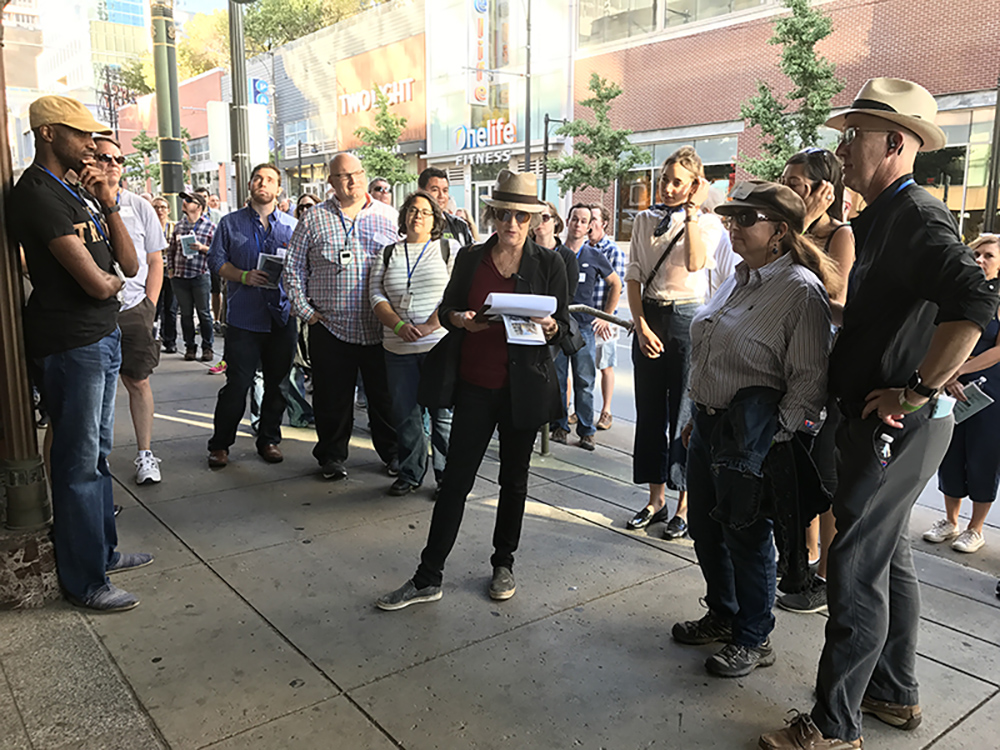 A city’s shape and character are constantly changing. Over time, neighborhoods take on different qualities – both physically and culturally. Buildings rise, fall, and get reborn with new uses. Resident populations grow and contract in cycles. Businesses thrive, struggle, reinvent themselves. Skylines and streetscapes shift over generations.

Downtown Kansas City serves as a perfect example of this sort of urban evolution. While the city center we see today may be a world apart from its Cowtown origins, signs of our history are still visible – if you know where to look.

The Library, National World War I Museum and Memorial, and Kansas City Museum offered a unique glimpse into our city’s past on Saturday, October 7, hosting a “history crawl” walking tour along a portion of the Main Street corridor downtown. The idea was to find an engaging, entertaining way to draw attention to the architecture and stories behind several sites within just a handful of city blocks.

The afternoon began with a kickoff at the Central Library, where Jeremy Drouin, manager of the Library’s Missouri Valley Special Collections, gave a brief overview of the resources and services available in the Missouri Valley Room. He also showed a handful of photos and postcard images featured on KC History, the Library’s website dedicated to digital history research resources and collections.

The approximately two-mile tour was led by preservation consultant and architectural historian Cydney Millstein, who has worked with the Library on numerous history projects, including a self-guided Library District Walking Tour and the Rooftop Terrace architectural history interpretive panel series.

The history crawl officially began with a rooftop review of Ten Main Center, next door to the Central Library, discussing how its construction method and building style helped shape Kansas City's architectural legacy.

From there, Millstein led the group south along Main Street. She highlighted the backstories of sites such as Petticoat Lane, the George B. Peck Dry Goods Company building, and two of KC’s historic downtown theaters, the Midland and the Mainstreet.

The group then paid a visit to Tom’s Town Distilling Co., where participants enjoyed a presentation from its staff about the era of namesake Tom Pendergast, the and infamous Kansas City political boss in power largely during the Prohibition years.

After sampling a cocktail (to quench the thirst for local history knowledge), the group continued towards the Crossroads. Passing the TWA Building, which once housed the airline’s marketing team, Millstein noted the appropriateness of current tenant – and marketing firm – Barkley.

At the intersection of 19th and Main, Millstein highlighted the three buildings that made up the “Working Class Hotels” – the Monroe, Rieger, and Midwest – serving salesmen, soldiers, and transient workers who needed lodging close to Union Station following its opening in 1914. The group also heard about how Tom Pendergast had a doorway installed between the Monroe Hotel and his second-floor office in the adjacent Jackson County Democratic Club headquarters at 1908 Main to allow convenient – and clandestine – entry.

After crossing the bridge over the Freight House District train tracks, the tour wrapped up at Union Station with the story of the 1933 Union Station Massacre – bullet marks still visible on the building’s façade.

Capping the tour, participants ascended the (many) steps to the Liberty Memorial at the National World War I Museum and, upon reaching the memorial courtyard, enjoyed a closing reception hosted by the Museum while taking in the view of the downtown city skyline.

Throughout the afternoon, tour participants shared photos on Twitter and Instagram, tagging posts with #HistoryCrawlKC and doing a bit of live reporting along the way. 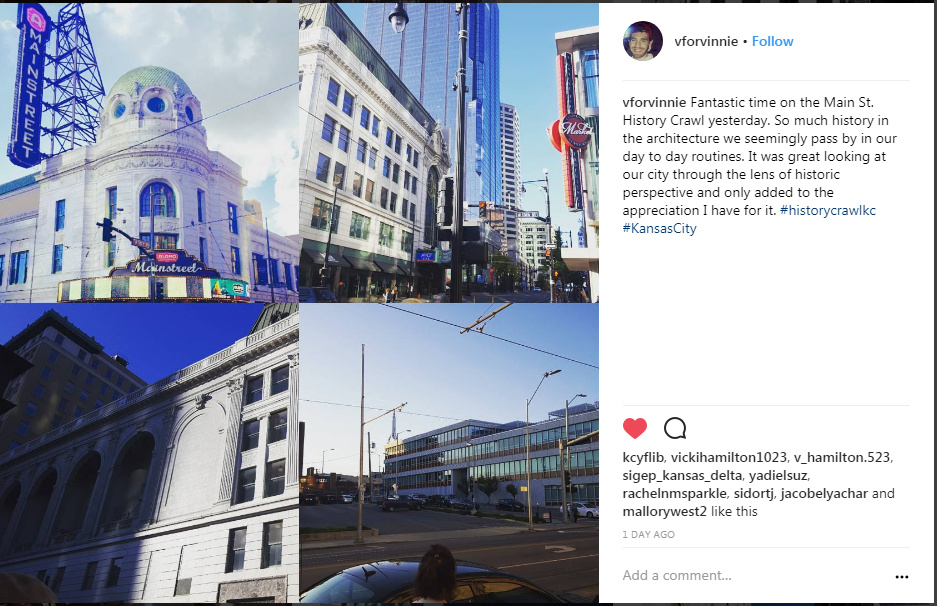 The Library’s Jeremy Drouin noted that the  opportunity to discuss the provenance and past of many of these sites in person offered a valuable experience. “It was great to see an enthusiastic group of people spending a Saturday evening learning about the history of downtown Main Street. Historic photographs and postcards provide a glimpse of the businesses and buildings that dotted Main Street over time. But seeing these structures up close, while Cydney explained their historical and architectural significance, really brought to life downtown’s rich history.”

As Millstein remarked after the tour, “It is no surprise that no matter how many times I take in architecture, even that of places I am familiar with, I am always reminded of the profound insight of A.L. Huxtable: ‘Today when so much seems to conspire to reduce life and feeling to the most deprived and demeaning bottom line, it is more important than ever that we receive that extra dimension of dignity and the elevated sense of self that the art of building can provide through the nature of the places where we live and work. What counts more than style is whether architecture improves our experience of the built word, whether it makes us wonder why we never noticed places in quite this way before.’ “
Related Resources:

•   “City of Tomorrow: Kansas City’s Postwar Urban Renewal,” a Library-produced exhibit about the city's post-World War II efforts to combat blight and fuel redevelopment, and how they impacted established neighborhoods, architectural landmarks, and sense of community. Currently on display at the Central Library on the 5th Floor.

•   The Pendergast Years: Kansas City in the Jazz Age & Great Depression: A digital history website dedicated to exploring Kansas City during the 1920s and '30s curated by the Kansas City Public Library and other community partners.