Post date:
Friday, October 27, 2017
Halloween is the time of year when many of us think about what really scares us. To get you into the Halloween spirit, our staff highlights books or resources or digital services that gave us major heebie-jeebies or just have a great Halloween theme in them.  Share your favorite spooky reads with us on social media! Tag us on Facebook (/kclibrary), Twitter, and Instagram (@kclibrary) using the hashtag #HalloweenReads. 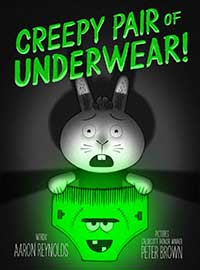 Creepy Pair of Underwear
by Aaron Reynolds
Sometimes the spooookiest things can be found in your underwear drawer. Jasper, the star of the also slightly ghoulish Creepy Carrots, is a big rabbit who is not scared of much. When his new underwear gleam with a greenish glow, however, he is seriously freaked out and goes to great lengths to banish them from his sight. Then he realizes that there's something even creepier to face that only those glowing underoos can help. This silly-instead-of-scary pick is perfect for anyone trying hard to be a brave big kid while conquering some old fears, as well as anyone looking for a not too scary readaloud for Halloween.

A Head Full of Ghosts - by Paul Tremblay 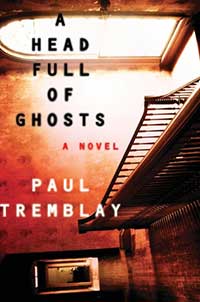 A Head Full of Ghosts
by Paul Tremblay
Parents reluctantly turn to a Catholic priest when doctors are unable to help their 14-year-old daughter who is showing symptoms of schizophrenia. The family soon finds themselves the stars of a new reality TV show, The Possession. As her sister (then 8-years-old) unfolds the events in an interview 15 years later, she begins to question her memory and the reality of the situation. You'll want to break out the night light for this one!

Scary Stories to Tell in the Dark - by Alvin Schwartz 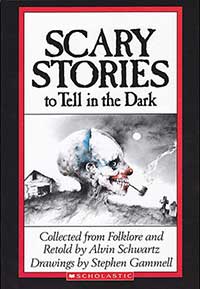 Scary Stories to Tell in the Dark
by Alvin Schwartz
I read these books when I was young and I remember being so intrigued by the folklore in the stories, but also terrified. They are really great stories to read if you want to get into the Halloween spirit. Beware though, my memory of being scared by these stories is probably why I stay away from the horror genre these days. 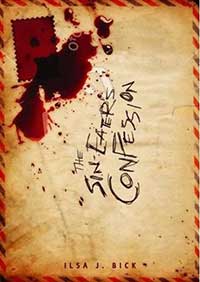 The Sin-Eater's Confession
by Ilsa J. Bick
This book happens to be the best murder mystery that I've ever read. The bias point of view in which it is written, plus the eerie settings and angst filled characters makes for a thrilling read. I read the whole book in one night. It's one of my favorites! 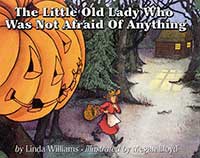 The Little Old Lady Who Was Not
Afraid of Anything
by Linda Williams
In this classic picture book, the little old lady gets followed home by two shoes that go STOMP, STOMP; two gloves that go CLAP, CLAP; and more - ending with one scary pumpkin head that goes “BOO!”

The Graveyard Book - by Neil Gaiman 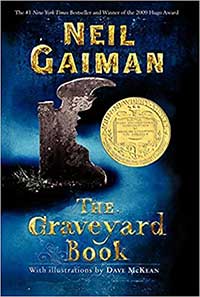 The Graveyard Book
by Neil Gaiman
A man named Jack murders a family except the baby who climbs out of his crib, finds his way out of the house, and into an ancient graveyard where he is raised by the ghostly residents. This Newbery Award book is brilliantly read on audio by the author.

Through the Woods - by Emily Carroll 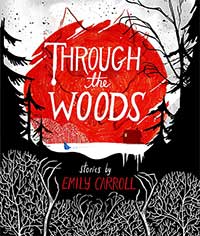 Through the Woods
by Emily Carroll
Stunningly beautiful illustrated stories that will haunt you like those of Edgar Allan Poe. For fans of fairy tales, horror, and things that go bump in the night. 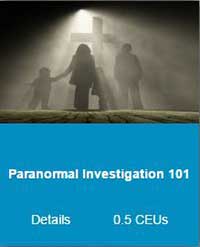 Paranormal Investigation 101
from Universal Class
Learn how to conduct your own paranormal investigations so you can freak out all of your friends!

I Am Legend - by Richard Matheson 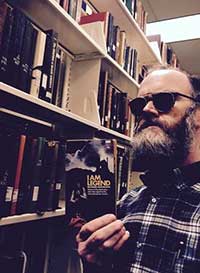 The sunglasses will make sense if
you've ever seen the
Charlton Heston film version,
Omega Man," Michael Wells.
I Am Legend is a groundbreaking work of horror fiction that has heavily influenced the ways in which both vampire and zombie apocalypse stories are told. Do not trust its various film adaptions - you'll want to read this one for yourself. While relatively short in length, the story remains captivating throughout and lends itself to being quickly absorbed in the final days before Halloween. 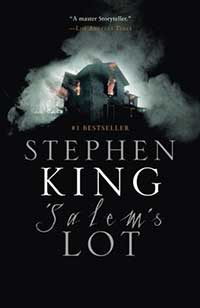 'Salem's Lot by Stephen King
'Salem's Lot is one of Stephen King's most terrifying works. While vampires have become something of a sex symbol lately, the vampires in 'Salem's Lot are not here to have fun. They are awful, dreadful fiends and they only want one thing - blood. I may have slept with the lights on after reading this book.

We Have Always Lived in the Castle - by Shirley Jackson 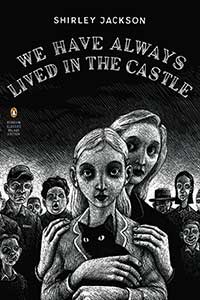 We Have Always Lived in the Castle
by Shirley Jackson
Creepy and haunting, though not outright terrifying, this book stays with you long after you read it.  The old house the two sisters live in is a character in its own right, emanating claustrophobic vibes of mental, deranged madness.  Shirley Jackson (author of the popular short story "The Lottery") is a master of real psychological terror, and this book really left me with the creepy-crawlies! Her skilled use of haunting, yet perplexing, characters in a setting that lives and breathes as much as the people in the story, is something you just have to experience yourself.  A spooky Halloween read for sure! 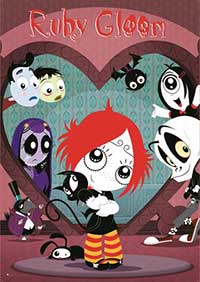 TV show Ruby Gloom
With your Library card you get 12 FREE media downloads per month with Hoopla. For an adorable yet spooky choice, check out Ruby Gloom, an animated series about a cheerful goth girl and her wonderfully weird friends. It's a fun, Halloween-y watch whether you're a kid or an adult! 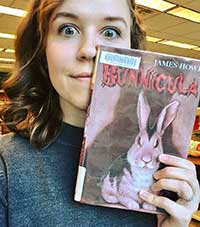 Bunnicula by Deborah Howe
What's not to love about a cute little bunny with sharp fangs and a nasty habit of sucking its vegetables dry? Even funnier when the bungling humans don't get the hint from their cat and dog that something is not-so-right about their new pet bunny. This was one of my favorite reads in 4th grade and it has remained a favorite to recommend.

Gwendy's Button Box
by Stephen King
Gwendy first meets a man in a park. He calls her over and gives her a button box (a box with buttons that one can press, not buttons that might hold clothing together, which is what I’d originally imagined before opening the book).

The buttons, he explains, each represent a different area of the planet, and that they should not be pressed under any circumstances. There are two other buttons, a red one, which is supposed to signify whatever Gwendy wants, and a black button, which implies total annihilation worldwide. Why he gives this box to Gwendy is not really clear. He tells her she must protect it and keep it close. But it’s good to keep in mind that this is Randall Flagg we’re talking about here, and he’s generally a dick on most days, anyway. Maybe he just wants to torment some dumb kid. In any case, he gives her the box. Not only do these buttons exist on it, but there are also two levers. When you pull one of them, tiny pieces of magical chocolate fall out. The chocolate kills your hunger and increases your intelligence, somehow. The other level shoots out rare coins, because of course it does.

You know it's going to get weird after that because after all it was written by Stephen King. No one does weird and scary better. 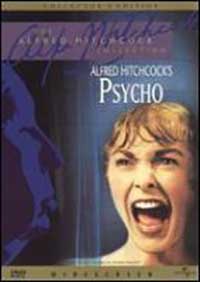 Psycho,
directed by Alfred Hitchcock
A young woman spends the night in a hotel next to an adjoining house ran by a mentally disturbed man and his mother. Still one of the best horror movies of all time. Staring Anthony Perkins, Vera Miles, John Gavin, Janet Leigh, & John McIntire.

In a Dark, Dark Room and Other Scary Stories - by Alvin Schwartz 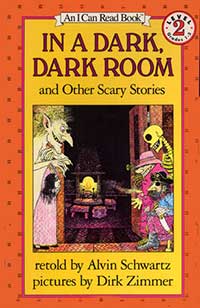 In a Dark, Dark Room and
Other Scary Stories
by Alvin Schwartz

This book is really great for young readers. Most of the stories are silly and not very scary. The exception being the story The Green Ribbon, which haunted my thoughts for years and years. So much so that the girl with the green ribbon is my Halloween costume this year. 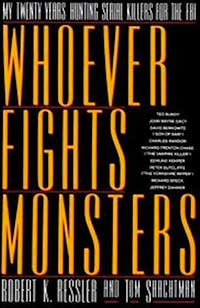 Truth can often be more frightening than fiction. Robert Ressler, one of criminology's pioneering profilers, shares some truly terrifying accounts of his work with the FBI, which involved interviewing some of history's most notorious serial killers and mass murderers - John Wayne Gacy, Ted Bundy, Charles Manson and the like – in order to learn about what drives them. I read this book many years ago as part of an abnormal psychology class; to this day, Ressler's recollections of his encounters with extremely hideous men stand out as some of the creepiest, most disturbing stories I’ve ever come across. You don’t want to believe people are actually capable of the things these men have done; the book is a shocking, frightening read, providing insights into humanity’s darkest nature. But it also shines a fascinating light on the kind of individuals who investigate and study this rare breed of criminal. There’s a mental cost that comes with that kind of job; the authors acknowledge that in the book’s title, taken from the infamous Nietzsche quote: “Whoever fights monsters should see to it that in the process he does not become a monster. And when you look long into an abyss, the abyss also looks into you."

The Changeling - by Victor LaValle 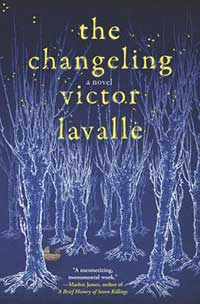 The Changeling
by Victor LaValle
Do you like stories with a slow, creeping sense that something isn't quite right? Real life meets horror in The Changeling by Victor LaValle. This grown-up fairy tale about fatherhood makes so many intricate twists and turns, don't be surprised when you find yourself wondering what around you is real, and what is perhaps being hidden from you...