Movie studios messed with the Hollywood Production Code at their own peril.

The code – in place from the early 1930s through the early ‘60s – was a guideline of do’s and don’ts that were to be followed by any motion picture released by one of the major studios.

Some of the code’s rules seem absurd today. Like the idea that evil must always be punished before the lights come up. Or that even married couples must sleep in twin beds. Or that movie audiences should never see a – gasp! – toilet.

Long before the cameras rolled the studios submitted their screenplays to be vetted by the Production Code’s staff. Offensive dialogue was eliminated. Certain plot points might have to be tweaked. Occasionally the code folk pronounced an entire film unfit for moral reasons.

Why would the studios handcuff themselves artistically by submitting to such a system?

Well...money. Before the Production Code, hundreds of censorship boards in cities, counties, and states around the U.S. were in the business of watching films and demanding changes. It was a royal pain, since a scene that was OK with the censors in Ohio might be banned by the censors in Alabama. The studios had neither the time nor the inclination to re-edit their movies for different locales.

The Production Code solved that problem by setting standards that would be acceptable everywhere in the U.S. The idea was that a film could play in any city or state, to any sort of moviegoer (old or young, male or female), without causing offense.

And it worked. Once the code was in place, most local censorship boards were shut down. The movies were now a one-size-fits-all proposition.

1939’s In Name Only was made under the Production Code, of course. But somehow it managed to bend the usual rules out of shape.

It’s about a husband who falls for another woman – and ends with him happily leaving his wife for his new love.

That plot line should have put In Name Only on the code’s naughty list. Marriage was sacrosanct under the code, yet here was a movie that argues that under some circumstances, destroying a marriage is a good thing.

How did they get away with it?

Well, for starters, Richard Sherman’s screenplay appeals to the code rule that holds evil must be punished. It makes the wife a bad person, one deserving of her comeuppance. 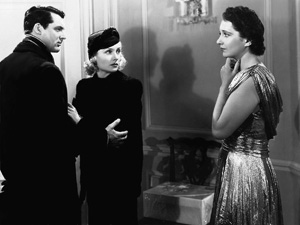 Here’s the setup: Alec Walker (Cary Grant), the heir to a vast fortune, is stuck in a loveless marriage to Maida (Kay Francis). Maida doesn’t love Alec and only married him for the money, but she is so good at faking selfless concern and virtuous behavior that she has everyone fooled, especially Alec’s millionaire father (Charles Coburn).

Behind closed doors she’s a vicious, cold, calculating harpy. When there are others around Maida plays the virtuous wife.

Another thing that allows the filmmakers to get away with it: the likability factor cornered by Grant and his leading lady, Carole Lombard.

Lombard, usually known for her comedy chops, plays it straight here as Julie, a widow with a young daughter who rents a small house on the Walker estate. She and Alec meet cute one day when she’s attempting to fly fish on a local pond and he stops by to dispense angling advice.

They talk, they start to feel an attraction. Alec, of course, isn’t free to pursue Julie...but he does anyway.

Julie has been written as a decent woman who wants no part of being a home wrecker. It’s only when Alec convinces her of Maida’s perfidy that she agrees to bear the slings and arrows of outraged society and be seen in public with her married love.

You can imagine some underpaid Production Code censor struggling through the screenplay, torn between his dedication to conventional marriage and his embracing of Alec and Julie’s pure love.

And just how pure is their love, really? Well, thanks to the Production Code there can be no hint that Alec and Julie are having sex out of marriage. Heck, the code didn’t even want to consider the possibility of sex within marriage. It could handle the birth of a baby...just not the making of a baby.

But even in 1939 most people were hip to the birds and the bees. Watching In Name Only some of them undoubtedly imagined Alec and Julie having a physical relationship. I mean, you can’t stop people from imagining, can you?

While there’s considerable charm and humor in the early stages of Alec and Julie’s relationship, things soon get melodramatic as the wicked Maida finds ways to paint the inoffensive Julie as a husband-snatcher. But being the vicious witch she is, she overplays her hand.

No point in ruining the big payoff. Let’s just say that In Name Only gets away with breaking up a marriage, leaving just about everyone – especially audience members – feeling the better for it.

Admission to these films is free.

Robert W. Butler is a lifelong Kansas City area resident, a graduate of Shawnee Mission East High School and the William Allen White School of Journalism at the University of Kansas. For several decades he was the movie editor of the Kansas City Star; he now writes a movie-themed blog at butlerscinemascene.com. He joined the Library's Public Affairs team in 2012.