As Kansas City buzzed with All-Star game activity over the weekend, we got great help from our customers in choosing three more fictional players for our Off-the-Shelf All-Stars.

Now, we’re not sure whether Mr. Hyde, Tarzan, and Wilbur from Charlotte’s Web will take direction from our yet-to-be-named Coach, but they do make for an interesting lineup.

If you’re just joining us, over the past week, we’ve been asking our fans on Facebook to vote for characters to play on our literary Off-the-Shelf All-Star team, on which each position is based on an archetypal character from a different genre of fiction. Every day, July 1-10 (leading up to the big game at the K), we’ve offered up four librarian-approved nominees for each base and allowed people to write in their own.

Before we get to voting for our second-to-last position, Pitcher, let’s meet the three new players who came in over the weekend.

Left Field (Paranormal Being): Mr. Hyde
Sneaking into deep left is Mr. Hyde, poisonous alter ego of the otherwise highly sportsmanlike Dr. Jekyll, outfielder for the Boston Dead Sox. Hyde bludgeoned his way past the vampiric likes of Lestat of Interview with the Vampire and pert Sookie Stackhouse of the Southern Vampire Mysteries and shattered the hopes (and skull) of newlydead Zombie Charlotte Lucas of Pride and Prejudice and Zombies.

Right Field (Classic Adventurer): Tarzan
It’s no country for young men in Right Field, and we needed a hero from the pages of classic fiction to grab fly fouls and make that long throw to home. Though it looked for a while like Dashiell Hammett’s star gumshoe Sam Spade would win the draft, Edgar Rice Burroughs fans rallied, electing Anaheim Apes outfielder Tarzan. Also on the ballot were Jack Schaefer’s Shane, pirate king Long John Silver, and write-ins Holden Caufield, Alice in Wonderland, and David Balfour.

Catcher (Famous Animal): Wilbur the pig
Trotting in from the pages of E.B. White to dig his hooves into the spot behind home plate is farm system upstart Wilbur the pig. A runt no longer, Wilbur got snapped up by OTS drafters over Arthur the aardvark, Bluebell the cow, Stellaluna the bat, and write-in candidate Owl of the Hundred Acre Wood nursery club. 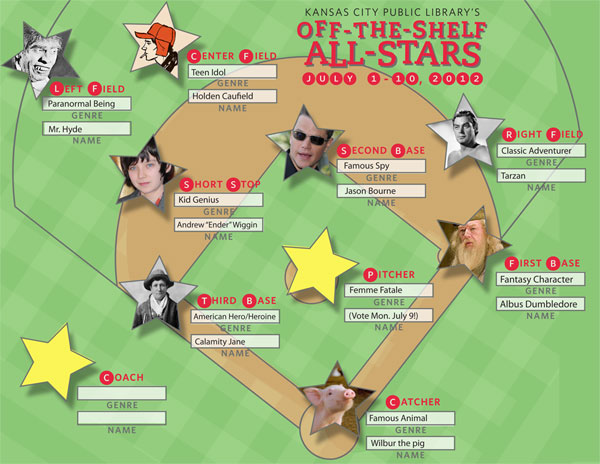 It's time to draft a Femme Fatale Pitcher to make sweet chin music for the Off-the-Shelf All-Stars.

And now we’re in the home stretch, with only two positions left to go: Pitcher and Coach. The vote is already on for the former, a literary Femme Fatale, so head over to our Facebook page to vote your favorite or write in your own nomination (which several folks have already done). The draft for Pitcher ends at 9 a.m. Tuesday, July 10, and then at noon we’ll elect a Coach to lead this motley rabble of literary major leaguers.

Who’s calling all the pitches, shaking off advice, and firing warning shots at cheeky batters? The dame on the mound! Pick a Femme Fatale to blaze the fastballs as Pitcher for the Off-the-Shelf Literary All-Stars!

Scarlett O’Hara - Gone With the Wind by Margaret Mitchell

Vote now, and come back tomorrow to help us pick a Coach!

Our Off-the-Shelf team so far…