The last time a write-in candidate made it to the MLB All-Star roster was in 1974. The Dodgers' first baseman Steve Garvey was elected by fans and went on to win MVP. The same could apply for Lisbeth Salander, the Off-the-Shelf All-Stars' fan-elected Femme Fatale Pitcher.

When we posted our official librarian-chosen nominations for Pitcher yesterday at noon (as we have each day since the Off-the-Shelf draft began on July 1), we offered up four Femme Fatale choices that had, we thought, the best mid-season stats of any ladies in the league: Scarlett O'Hara, Winter Santiago, Cathy Earnshaw, and Emma "Arsenic Arm" Bovary.

But apparently they weren't what the people wanted. When an unknown drafter wrote in Salander, aka The Girl With the Dragon Fastball, fans rallied, and Lis shot to the top of the ballot, garnering more votes than any other player in this entire draft. Coach Larsson would be proud. (Other great write-ins: Scout Finch, Amelia Bedelia, Amanda Wingfield, and Camille Preaker.) 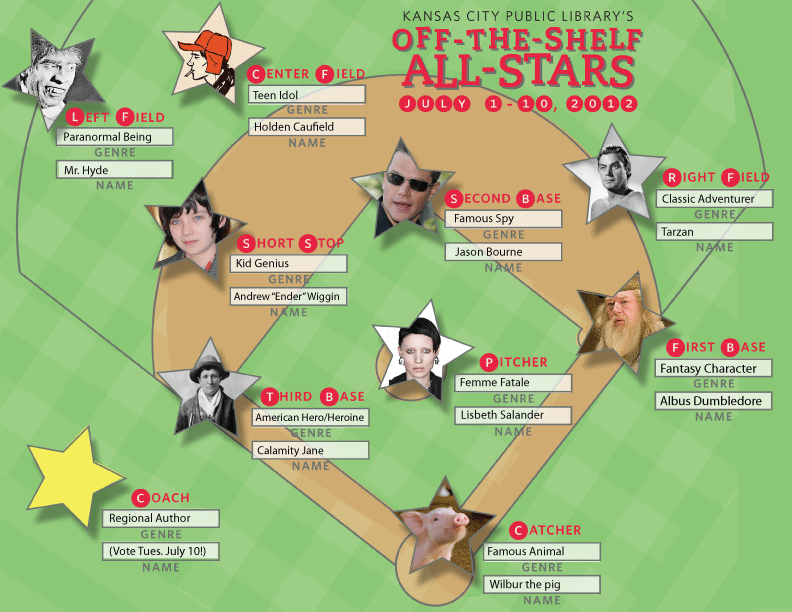 What Regional Author should coach our literary All-Stars?

Now that we've got our players chosen -- and as the crowds head to the K for the big game tonight -- it's time to make our final choice: Coach.

For this honored position, who else could we appoint but someone from Kansas City's rich literary past? But just to make sure we get a rich field of heavyweights to choose from, we've extended the boundaries to the entire Kansas and Missouri region.

Check out our picks below, and if you don't like 'em, write in your own nominations for others to vote for -- just like you did for Lisbeth.

The voting begins now and ends Wednesday morning at 9 a.m.

This team needs a hometown coach to set them on the path to the championship. What author from regional lit would you like to see in the dugout?

Vote now, and come back tomorrow to find out who won!

Our Off-the-Shelf team so far…