Shakespeare's First Folio is coming to the Library

The Kansas City Public Library has been selected as the Missouri stop for the Folger Shakespeare Library’s 2016 national tour First Folio! The Book that Gave Us Shakespeare, marking the 400th anniversary of Shakespeare’s death.

Only 233 copies exist of the First Folio—the first collected edition of Shakespeare’s plays published in 1623—and we’re beyond excited to have the opportunity to exhibit one at our Central Library in downtown Kansas City.

Eighteen First Folio copies will circulate among the exhibit locations. They're among 233 copies of the book known to exist today, less than a third of the 750 thought to have been printed originally in 1623. A single exhibit location was selected in each state, the District of Columbia, and Puerto Rico. Kansas State University was named in Kansas.

Published seven years after Shakespeare's death, the First Folio was the first compilation of his plays. Eighteen of the works, including Macbeth, Julius Caesar, Twelfth Night, The Tempest, Antony and Cleopatra, The Comedy of Errors, and As You Like It, had never appeared previously in print and otherwise would have been lost.

When the First Folio arrives in Kansas City, its pages will be opened to the most quoted line in the world: "to be or not to be" from Hamlet. Accompanying the 900-page book will be a multi-panel exhibition exploring the significance of Shakespeare, then and now, with additional digital content and interactive activities.

The Kansas City Public Library will make the four-week exhibit the centerpiece of a months-long celebration of Shakespeare, partnering with local and national scholars and an array of area institutions and organizations in offering speaking presentations, stage productions, film screenings and discussions, workshops, and other activities for children and adults.

The Kansas City Public Library will be displaying the First Folio June 6 - June 28, 2016. Other dates and locations for the 2016 exhibit are available here. More information on the exhibit available in our press release. 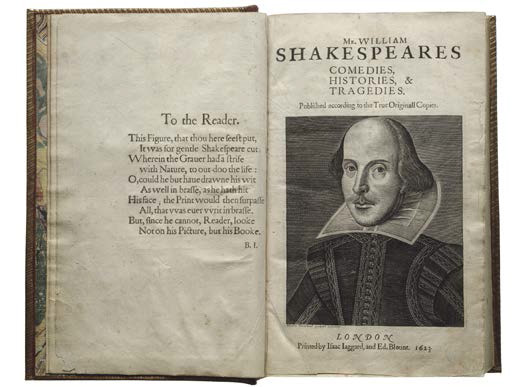 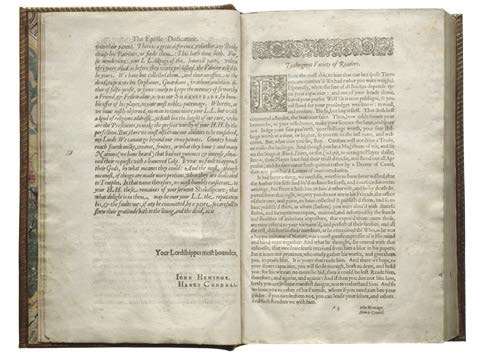 This exhibit has been made possible in part by a major grant from the National Endowment for the Humanities: Exploring the human endeavor and by the generous support of Google.org and Vinton and Sigrid Cerf.