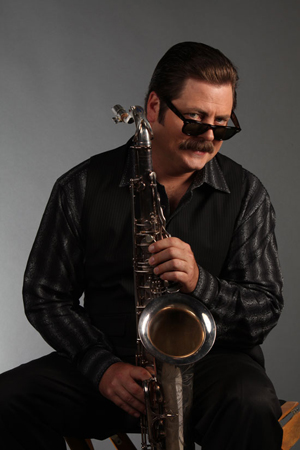 
Kelly Mahon didn’t get into television’s Parks and Recreation during its seven-season run on NBC, and so he isn’t acquainted with Silver, the smooth, secretive, sax-playing alter ego of steak and gun enthusiast Ron Swanson (as portrayed by Nick Offerman). Apprised of the storyline, though, Mahon nods.

“I can see the parallel,” he says.

By day, Mahon works out of the downtown Central Library’s H&R Block Business & Career Center as its funding information network supervisor. The longtime Library staffer helps connect individuals, foundations, and other entities in search of grants with grant makers.

In his free time – “anytime I’m awake and sometimes when I’m asleep” – he’s thinking, writing, or performing music. Mahon plays saxophone and six other instruments, including the five-string banjo he learned in high school from a Pete Seeger how-to book and listening to a lot of Lester Flatt and Earl Scruggs. He’ll do everything from jazz to orchestral numbers. He also has created 14 compositions for the sax and different combinations of sax, piano, and harp.

One of them, his Sonata for Tenor Saxophone and Piano in three movements, was performed May 22 at the Central Library as part of an evening event featuring saxophonist Vince Gnojek and pianist Holly Page. They performed a selection of works ranging from classic Gershwin tunes to more recent arrangements by a trio of composers, including Mahon, with University of Kansas roots.

Mahon, 64, got into music in elementary school in southern California, and intended to make it his livelihood. He earned a bachelor’s degree in music from San Diego State and both a master’s and doctorate in music theory and composition from KU. He wanted to teach and write on the side but “the gods of tenure track just weren’t smiling,” he says, smiling himself. “I never got an offer for a fulltime position.”

He earned a master’s degree in library science from Emporia State – in 1987, impressively the same year he got his master’s in music – thinking he’d go into music librarianship. Mahon ultimately landed at the Kansas City Public Library as a part-time reference librarian in 1997, and went fulltime three years later.

He did, indeed, get in some teaching, including four years as a graduate assistant at KU and a couple of years as an adjunct instructor at Avila College. He also spent time in Switzerland, teaching jazz improvisation and five-string banjo and performing with jazz and new music ensembles during a break from his master’s studies at KU. 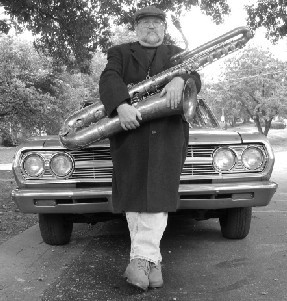 
Even if not now his career, music is no less a passion. Mahon composes, arranges, and enjoys jamming in saxophone quartets. In addition to sax (which he studied at KU under Gnojek) and the banjo, he plays flute, clarinet, base, piano, and harp.

The fictional Duke Silver has some catching up to do.