"I have always imagined that Paradise will be a kind of library," Argentine literary great Jorge Luis Borges once wrote.

That would start with books, of course. But step through the double-leaf bronze doors of the Kansas City Public Library's downtown Central Library, and the view of eternal bliss broadens. Artwork adorns the walls. Sculptures lend accent. The ONENORTH technology center that opened on the first floor a year ago is no everyday computer lab but a specially designed, art-appointed space that's every bit as visually striking as it is functional.

Art lives here, an essential element in the Library's commitment to lifelong learning and community enrichment. KCPL has more than 200 pieces on display throughout the Central Library, ranging from paintings and prints of intricate historical maps to statues, figurines and a specially commissioned, English slipware commemorate plate created by famed Kansas City potter Irma Starr.

A number of the works are originals. Many are reproductions, and the collection extends to Library artifacts and ephemera—perhaps not art by definition but very much a part of the artistic ambiance.

"It's part of our history," says Jonathan Kemper, the chairman of Commerce Bank, Kansas City Region, and president of the Kansas City Public Library's board of trustees. 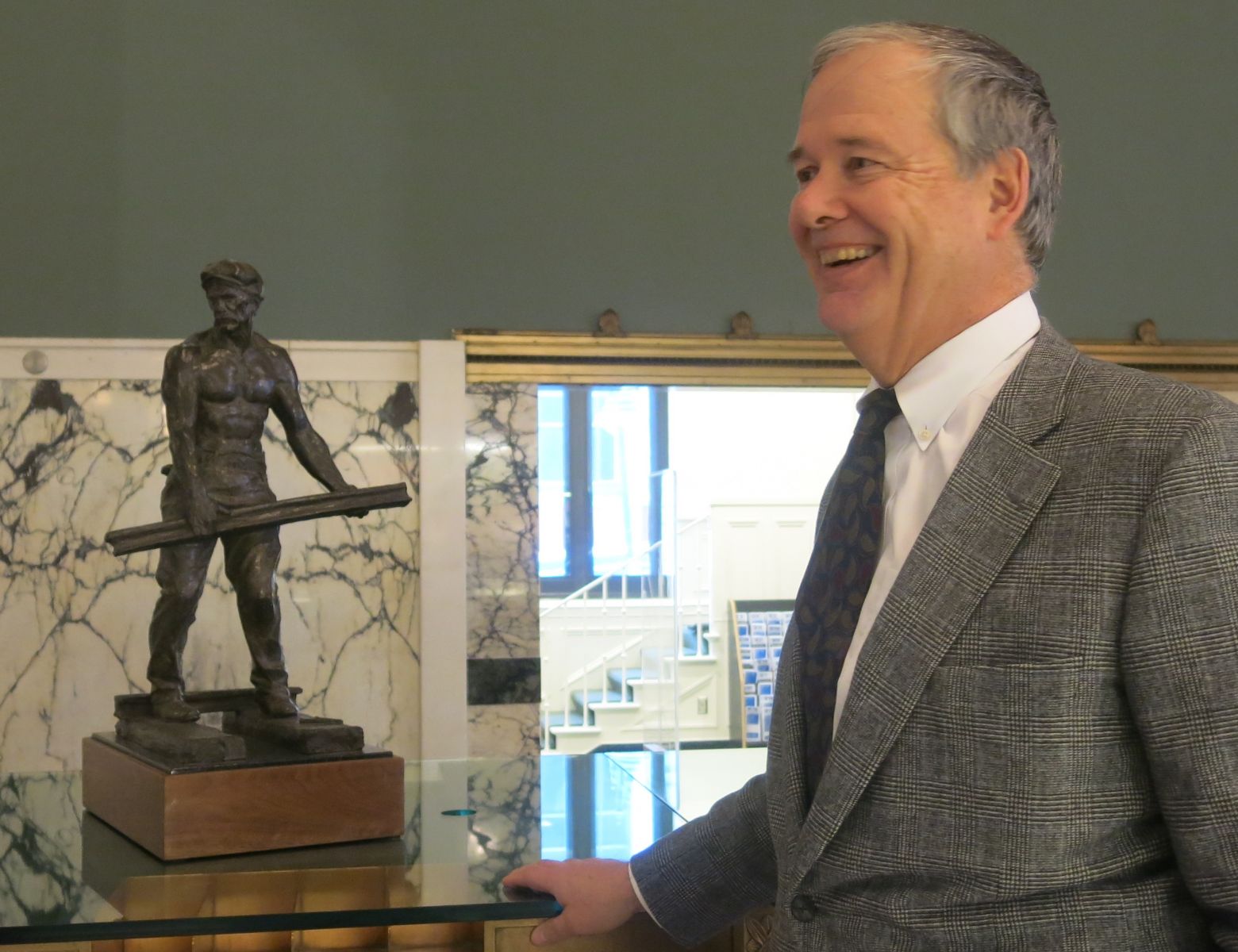 Jonathan Kemper next to Gandy Dancer, a 27 1/2-inch bronze sculpture by Ed Fraughton.

"In a way," he says, "we like to think of the Library as the city's oldest cultural institution. It's not just about books. It's about lectures and other programs. And about art."

Accompany him on a walking tour the Central Library, and you'll invariably wind up at the first-floor circulation desk and its striking backdrop: a more than 7-foot-wide, 5-foot-high reproduction of George Caleb Bingham's famous oil painting "Martial Law or Order No. 11." A reproduction of an even larger mural, the 22-foot-long "Achelous and Hercules" by iconic KC artist Thomas Hart Benton, was unveiled outside the Library's Genevieve Guldner Gallery in January.

A few steps away is ONENORTH, where an original abstract piece by acclaimed painter and longtime Kansas City Art Institute instructor Warren Rosser dominates one wall. A sequence of 10 relief prints by KCAI associate professor Laura Berman overlooks a nearby bank of computer stations. The sleek technology hub was designed by former Dolphin Gallery and frame shop owner John O'Brien, and features a large, colorful, computer-generated image of white matter fiber bundles in the human brain.

Kemper takes pride in a sense of style that pervades the Central Library, which itself is something of a work of art. First-floor Kirk Hall—with its high ceilings, stately columns and marble floor—epitomizes the overall elegance of a building that dates to 1906 and was home to the First National Bank of Kansas City and succeeding banks until 1999.

"Crosby (Kemper, the Library's executive director) thinks of the Library—and I think it's right on—as being an instrument of civilization. It's complementary, but it's also essential," Jonathan Kemper says.

"Art should be part of that."

A version of this item originally appeared in KC Studio magazine.