When the Pulitzer Prize board announced that there was no fiction winner this year, we came up with an award of our own: The Publitzer Prize. This week, we're letting you – the public – nominate potential finalists. But first, our jurors share their official Publitzer nominations.

As the literary world looks back in anger, we’re asking you to make up for the Pulitzer committee’s failure by nominating your favorite book from 2011 to compete in a vote to determine the winner of the 2012 Publitzer Prize. (Nomination Form)

After you send in your nominations this week, our four jurors will deliberate and draw up a list of three finalists, which you will vote on beginning Monday, April 30, 2012. On Wednesday, May 2, 2012, the winner of the first-ever Publitzer Prize for Fiction will be announced.

Here now, to offer up her favorite fiction from the past year is Kaite Mediatore Stover, leader of the FYI Book Club and readers’ advisory expert at the Library. 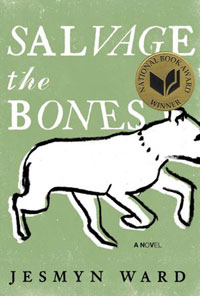 How do I know it wasn’t, as Ann Patchett feared, a “bum year for fiction?” Because a gut-wrenching, eloquent, tragic and inspiring novel about a family from Louisiana riding out the horrors of Hurricane Katrina wasn’t a finalist for the 2012 Pulitzer Prize for fiction.

If Jesmyn Ward’s 2011 National Book Award-winning Salvage the Bones wasn’t a contender, then the finalists that were in the running for one of literature’s most prestigious and coveted prizes had to be transcendent, exemplary, superior, and a host of other adjectives there’s a shortage of time and space to list here.

However, I would like to call the Pulitzer (and Publitzer) jurors’ attention to this powerfully written and moving story of Esch, the only daughter in a family preparing for the arrival of the hurricane that would change lives and landscapes and ruin fortunes and hearts.

In 12 chapters representing 12 days leading up to Hurricane Katrina, Ward carefully unpacks a story full of the hope and determination that drive youthful ambitions, no matter what size, and the bonds of a family that appear to be tenuously connected to each other, until these ties are tested by more than hurricane-force winds and water.

As unforgettable as the devastations of Hurricane Katrina may have been, Salvage the Bones is equally memorable for the layered characters, tense pacing, and assured prose.

There you have it. But don’t take Kaite’s word for it – check out Salvage the Bones yourself, and tender your nomination now for the first-ever Publitzer Prize for Fiction.